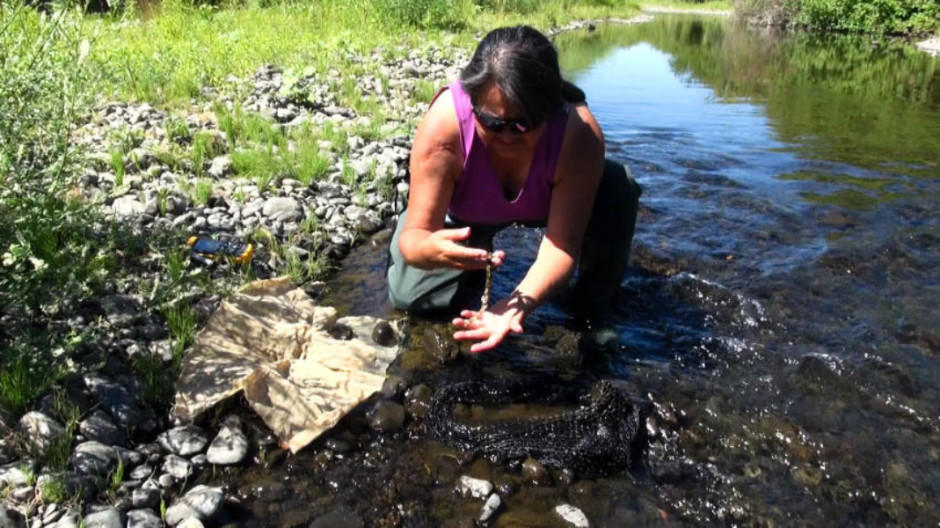 Tribal environmental programs, like water quality monitoring, could be hard hit under proposed cuts to the U.S. Environmental Protection Agency.

This story originally appeared on NWPR/EarthFix.

There are nights when a phone call wakes Elizabeth Sanchey out of a dead sleep. At the other end, a voice alerts her to a snowy wreck with a semi-truck leaking oil or a logging truck that’s crashed on the Yakama Nation Reservation in Washington’s Columbia River Basin.

And even through the fog of sleep, she knows this call is important. When gasoline or oil gets spilled, it needs to be cleaned up — and her hazmat crew is the one to do it.

“We’re from here. We were raised here. Our kids will grow up here, and we’ll retire here. This is our roots,”  Sanchey said. “The best way to support the home we love is to protect it. It’s why we’re on call.”

As in, on call 24-7 for Sanchey, who heads the Yakama Nation’s Environmental Management Program.

The program has been around for decades, but it wasn’t until recently that its focus has sharpened — with goals to reduce air pollution and cleanup runoff in the water.

Sanchey said 80 percent of the program is funded through the U.S. Environmental Protection Agency. Under budget proposals by the Trump administration, funding for the agency could be slashed — and that could hit Northwest tribes hard.

“If this funding goes away, this program, I’m afraid, won’t exist,” she said.

Her program encompasses a laundry list of environmental work. There are people who monitor air quality — with federally-funded monitors in Toppenish and White Swan, Washington; people who clean up old leaking underground tanks — full of gasoline and heating oil; and one person who monitors pesticide regulation for several tribes in the state. That position is federally credentialed, which is important because state agencies have limited jurisdiction on reservations.

And without that position?

“There wouldn’t be enough people to come out and monitor what’s going on,” Sanchey said. “It potentially could just become an environmental free-for-all, not monitored. And that scares me.”

It’s not just a problem for the Yakama Nation. Tribal officials say losing EPA funding would be a problem for most all tribes, not just in the Northwest. Tribes here have called the situation “alarming,” “frustrating” and “scary.”

The EPA did not respond to requests for comment.

Fran Wilshusen is with the Northwest Indian Fisheries Commission. She says the EPA — especially in the Northwest — has been supportive in “ramping up” resources for tribal programs.

“Do we get everything we want from EPA? Definitely not. Are these programs complete? No. They certainly don’t address all the needs that tribes have by any stretch, but the effort by EPA as an agency has been really incredible,” Wilshusen said.

For more than 20 years the tribes and the EPA have built a relationship that, Wilshusen said, would suffer if ties were severed. She said there are a lot of problems that need attention, like water quality in Puget Sound, air quality issues and climate change.

Jim Peters is a member of the Squaxin Island Tribal Council. He said his tribe has cleaned up shellfish beds through grants like the General Assistance Program, which assists tribes in managing their environmental programs.

“We were able to go back into areas that we weren’t able to harvest in the past and commercially harvest again. This helps out the shellfish industry, also,” Peters said.

He said those natural resources hold a spiritual and cultural value to native communities.

Aaron Miles is the director of natural resources for the Nez Perce tribe. He said his tribe could also lose environmental programs — from air quality to water monitoring — and that could eventually cause harm to traditional first foods, like salmon and berries.

“We’re really the first practitioners who see the resources, and we eat them. These are direct impacts — what’s polluting the environment will have an impact on Indian people much more so than anybody else,” Miles said.

He said just thinking of the EPA as a regulatory agency is a “short-sighted view.”

“We have more fear about the Trump administration opening up a can of worms, the impacts of his decisions for our future,” Miles said. “The long-term consequences are much greater than us losing funding.”

In the near future, it could cost many people on tribal environmental staffs their jobs.

Noelle Saluskin is the air quality specialist for the Yakama Nation. She goes to bed wondering what might happen to her position — a job she worked to earn since just after high school.

“I love my job here. I love the people I work with,” Saluskin said. “It’s hard for me to think when I see job announcements come out, ‘Should I consider that?’ This is where my heart is. But if the news continues to get worse and worse, by summer, I have to really think about family and my children and what’s best for us.”

Beyond their office’s stresses, Saluskin and Sanchey said they also a worry about people’s health. At the Yakama Nation a lot of kids have asthma and are now better warned when to stay inside because of federal air quality monitors. Schools call and ask for updates daily.

She’s not sure what will happen yet. No one knows.

There are other non-federal grant applications — sure to be competitive now. Everyone seems on edge, trying to plan for an uncertain future.

“It could be detrimental to the community as a whole,” Sanchey said.