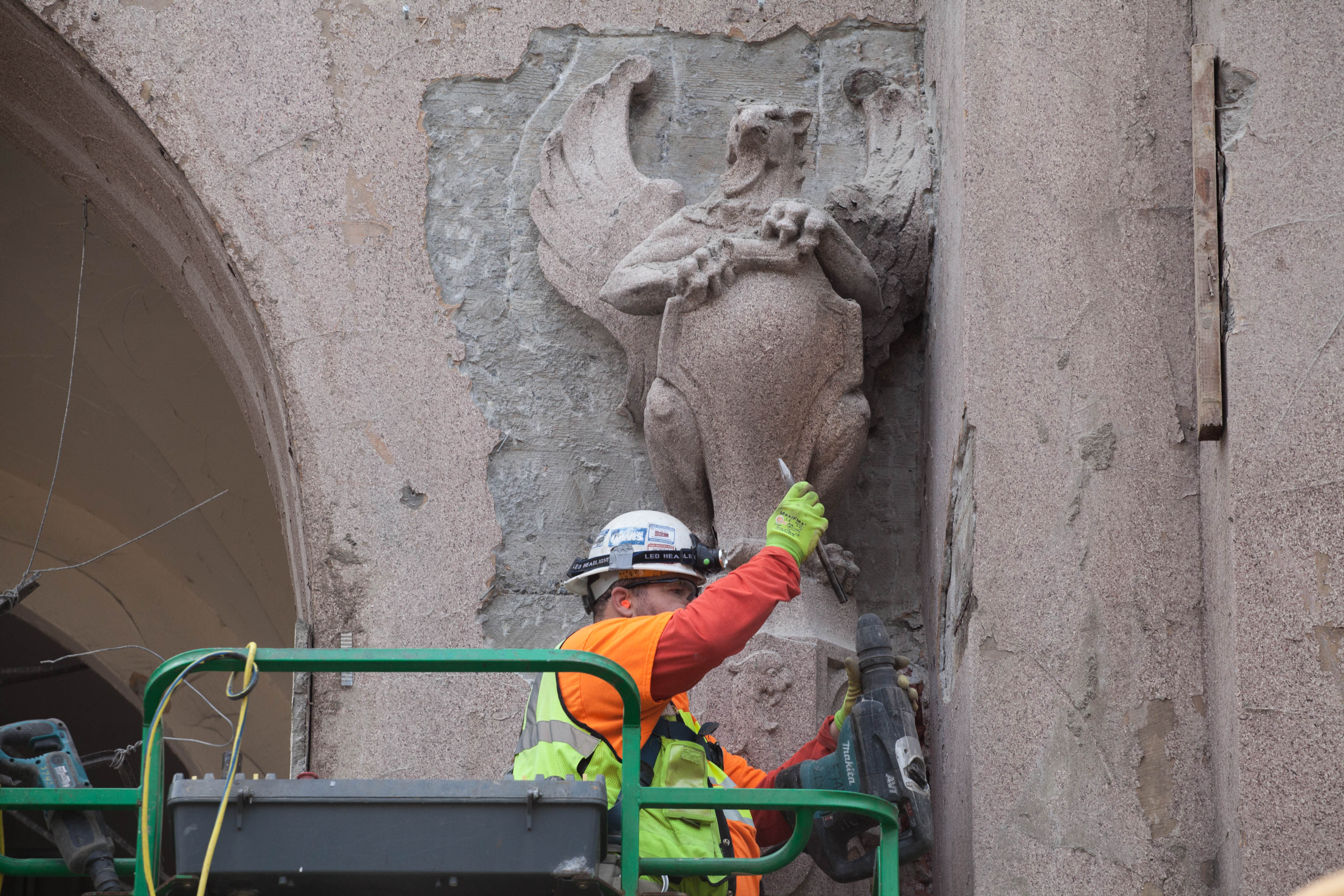 A very bad thing just happened in terms of historic preservation in Seattle.

The long-expected demolition of the old Seattle Center Arena started across Speight Jenkins Way, right outside Crosscut’s front door. The Seattle Opera is putting up a new building on the site. But as the wrecking equipment scraped away the 1960s exterior — put up to make a 1920s era ice arena look modern for the Seattle World’s Fair — what was underneath was revealed: the preserved exterior Romanesque façade of the original building with all its ornaments, including gargoyles.

That’s right, gargoyles. And they lay smashed in the rubble.

Feliks Banel, the Northwest historian and journalist who works for KIRO radio and other outlets, took photographs and video of the demolition process and began digging in to how this happened. Clearly, if that façade had not been walled in, it would have been worthy of landmark status and preservation. A couple of remaining gargoyles are being saved, says the Opera. But the beautiful front of the building, well, it’s toast.

Banel has dug into how this could happen. The bottom line appears to be that no one knew the historic façade was preserved behind the 1960s exterior. But should they have known?

Did the Opera and its architects and heritage consultants do enough homework? Why didn’t the demolition stop immediately when the façade was revealed?

All good questions. And, whatever the answers prove to be, the need to ask is indicative of a lot of questions in Seattle when it comes to preservation in Seattle. We boast about the fact that Seattle has more construction cranes than any other city in America — the number is estimated at 60. But while we’re rebuilding the town, we are also dismantling, not just our history, but our history of historic preservation.

A few areas of concern. The University of Washington won a court case against the city and preservation groups last year claiming it was exempt from the city’s Landmarks Ordinance. Just last month, the city’s appeal of that decision was kicked up to the state Supreme Court and oral arguments are scheduled there for early June.

A lot is at stake because the UW’s challenge could undermine not only Seattle’s landmarks law, but preservation ordinances statewide, according to the State Office of Archaeology and Historic Preservation, which does not support the UW’s position. Will the city’s law survive? Will the UW be given carte blanche for treating its historic properties? If Seattle’s ordinance must be changed, will the city council in a booming city have the courage to fix it? Is this the beginning of a great unraveling of our local landmark protections?

While the city defends its ordinance in court, the current administration at City Hall has taken actions that have alarmed preservationists. The HALA report, backed by Mayor Ed Murray, took aim at preservation efforts generally, suggesting repeatedly that it is a barrier to development, recommending against any more historic districts, suggesting shortcuts in the environmental review process so vital to preservation.

Earlier this year, the concept of preservation as “impediment” was further reflected in a job posting for the Department of Neighborhoods to hire a Community Assets Division Director to oversee, among other things, the city’s preservation program. That person would be charged with “using historic preservation as a tool for innovation rather than an impediment.”

This alarmed many preservationists. The person in charge of preservation should not be someone who views it as an albatross.

Plus it ignores history. Rather than an impediment, heritage advocates argue Seattle’s strong commitment to preservation has helped revitalize designated historic districts like Ballard, Columbia City, Pike Place Market, Pioneer Square and the International District. The preservation program is already an asset and it needs an advocate.

In a letter last month to the city, Kji Kelly, executive director of Historic Seattle, the public preservation non-profit, and Chris Moore, executive director of the Washington Trust for Historic Preservation, complained, “What concerns us about the job description is some of the language used presents historic preservation in a negative light, describing it as a ‘barrier to development’ and ‘impediment.’ This view diminishes the work of nonprofit organizations, grassroots advocates, individuals, and others that have dedicated years to the field of historic preservation.”

The preservation program in Seattle doesn’t require deregulation. Nor does it need to be run by someone who wants to dismantle its essence and alienate the stakeholders, Trump-style.

Still, developers want more leeway, to move faster, and Seattle is heavily dependent on the revenues that come from development. The pressures on heritage “assets” have never been greater.

It’s not as if the current system couldn’t be improved. The demolition of the Arena is a case in point. The Landmarks process relies on consultants, often hired by those who want to tear a structure down, to provide all the information on which the volunteer and over-worked landmarks board makes its decisions. I have long felt that the city should hire its own staff preservation experts to independently vet landmark proposals and survey the city for potential landmark structures. Often, issues arise late in the process, challenges are dealt with too situationally, often in crisis mode. The city has been more proactive at times in the past, as when it conducted a downtown landmark survey pushed by Peter Steinbrueck, but that was the exception, not the rule.

The city should be emphasizing a common value that regards “historic assets” as worthy in themselves, not just for maximizing profits for developers and revenues for the city. Such an ethic might have benefitted in the Arena if someone had bird-dogged and halted the demolition the second the original façade was uncovered.

In a Facebook comment, preservation consultant Michael Sean Sullivan wrote, “Unless it was a secret lair for the Phantom of the Opera or something, someone must have known the architectural sculptures were still in place and calling out their recovery during demo would have been a simple best practice.”

The question for Seattleites to consider is broader: Are we in the midst of dismantling our long commitment to historic preservation?

A couple of smashed gargoyles now frame that question.