Ballard museum will make you want to move to Norway 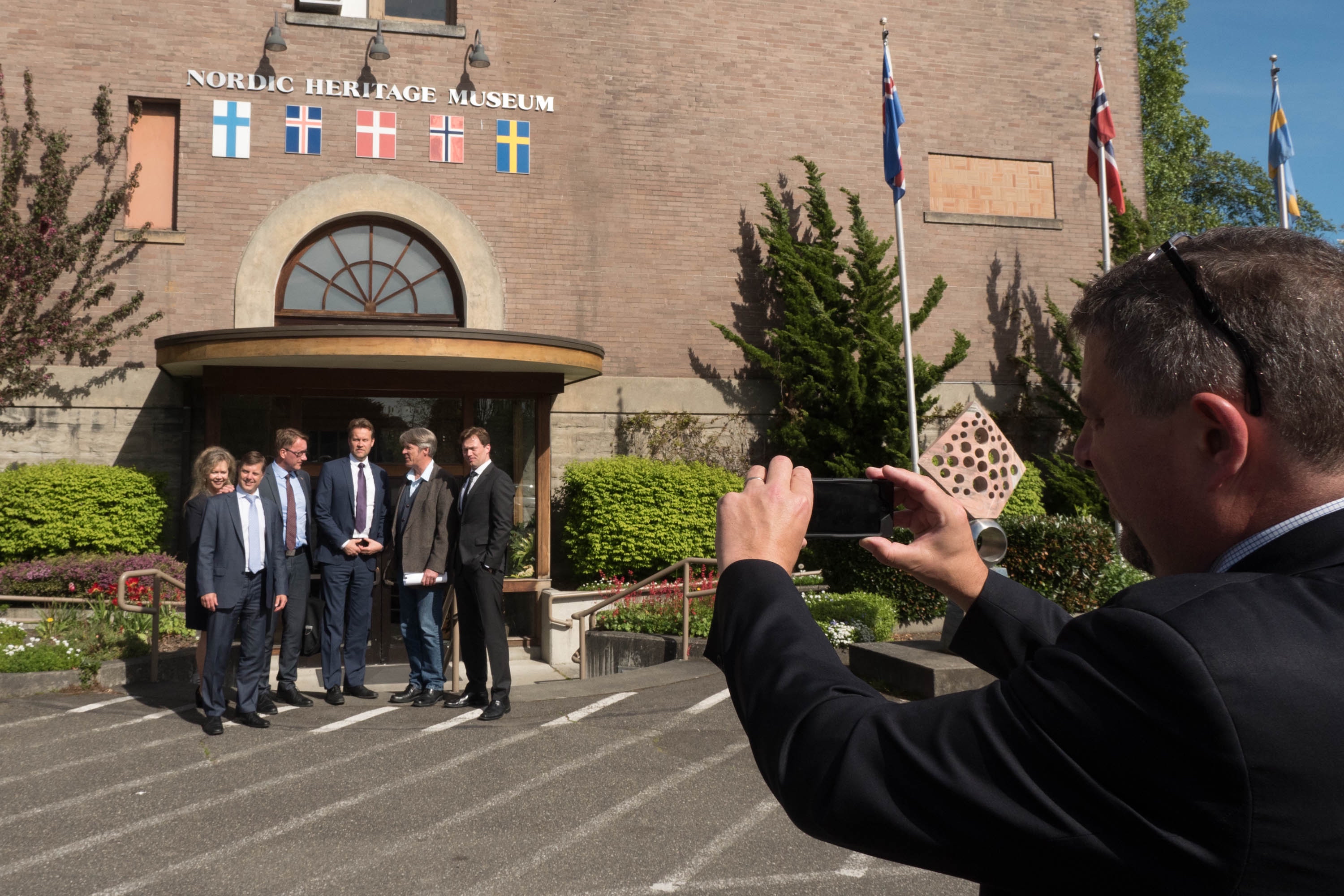 The World Affairs Council of Seattle and the Nordic Heritage Museum hosted various delegates from the Nordic countries at the museum, and site of its future space on Wednesday, May 3, 2017.

Can Ballard save America?

That’s a lot to ask. But Seattle’s old Scandinavian neighborhood could offer a cultural and political lifeline to the kind of America many in our blue bubble aspire to.

It begins with a $47-million project to build a new Nordic Heritage Museum. A year from now, in May 2018, it will open on Market Street — a sleek modern steel structure based on the idea of a glacier-cut fjord. It will form a kind of cultural link between modern Ballard and old Ballard, standing as it does between a gentrifying neighborhood and the fishing boats of Salmon Bay.

The old museum had to find a new home. It was lodged for decades in an old school that is now being reclaimed by the school district to meet the demands of new families. Which event provided an opportunity for a museum move and makeover, less devoted to Seattle’s Nordic newcomers who gravitated to Ballard in the 19th and early 20th century to a museum that also connects people with the Nordic countries of today, famed for tech, design and progressive social engineering.

These countries  are Norway, Sweden, Denmark, Finland and Iceland — sometimes viewed as the “Five White Swans” that are, in a Danish poet’s phrasing, flying together. The Swans are playing a role in shaping the message you will find in the new Ballard museum. In addition to old steamer trunks and pioneer tools, you’ll find contemporary exhibits on Ballard’s mother countries. The museum itself has been cultivating ties with those nations, seeking their advice and support.

The links with the Swans will be reflected in bridges connecting sections of the new museum’s upper floors across a high-ceilinged “Fjord Hall.” You’ll be able to cross between galleries featuring past and present, Seattle and Scandinavia. Eric Nelson, the museum’s director, says the exhibit narrative will be driven by four core themes: openness, social justice, innovation, and respect for nature.

Those themes reflect how Seattleites see themselves. Nature, tech, tolerance and fairness are consensus virtues here. They also match exactly the qualities Nordic countries are touting these days, with a sense of pride in their own accomplishments, but also a renewed urgency.

That was driven home by a delegation of Nordic diplomats that flew into Seattle in early May to tell us about their countries, and what has made them successful. The group included the Ambassador of Denmark, Lars Lose, and staff from the other Nordic embassies. Seattle is part of an American tour that started in Minneapolis, San Francisco and Seattle — “easy audiences,” says one of the diplomats, places where the progressive politics of Scandinavia — not socialism, but social democratic capitalism — finds sympathetic hearts and minds.

Like any missionaries, they have a book that embodies their beliefs. It’s called “Nordic Ways,” a compilation of essays that describe what makes the Nordic countries so special. Taxes are high, but citizens get free health care, free day care and free education through college. Even in a fiercely competitive global economy, the skies of such a welfare state haven’t fallen, at least not yet. There is full employment, women have economic and political equality, and the Nordic economies are doing very well. They are proof that social welfare states can thrive. Madeleine Lyrvall, wife of the Swedish ambassador, tells me the Nordic countries “are a bit like a bumblebee — it shouldn’t be able to fly but it does.” They defy the American conservative view of what works and what will bring disaster.

They say they are sharing their formula for success to create dialogue and understanding. But it is clear there is also worry about the direction the U.S. is taking in the Trumptimes. Trade is a huge issue — America is a big partner. So is climate change. Goran Lithell of the Swedish embassy says we have only 10 to 15 years before it’ll be too late to turn around global warming, something the Nordic countries are hyper-aware of, given their fragile Arctic ecosystems.

Another big issue is the Nordics working in this country — Scandinavia is a big source of tech talent, and has long been. Boeing used to hire engineers from SAAB, now Microsoft and Amazon hire from the companies that produced Minecraft and Spotify.

Seattle is pre-sold on much of the Nordic Model — our public officials junket to Copenhagen for lessons in sustainability, and Bergen and Reykjavik are sister cities. But in revealing their recipes for success, the Nordic Way also reveals barriers. The Nordic peoples trust governments, Americans do not. Nordic culture rests on cultural commonalities and a belief in collaboration. The U.S. is defined by competition and individualism. We might want what they have, but we don’t have the basic ingredients — we’re without the butter, sugar and eggs to bake a proper Danish.

The Swans have maximized the assets of homogeneity and common history. If people think Seattle is too white, the Swans are even whiter. Their cultural and ethnic bulwark is being challenged by globalization and immigration. Nationalism is on the rise in Scandinavia as the countries attempt to assimilate huge numbers of refugees and immigrants, many from the Middle East. Will the Nordic Model thrive under such pressures? How will they adapt? Will low-wage workers erode Nordic egalitarianism that seeks to lessen the gaps between rich, poor and middle?

But there is value in ties with other countries. As cities like Seattle become more isolated from national politics, maintaining international connections becomes doubly important. We’re undergoing a kind of soft secession from the U.S government under Trump, and we’re going to need friends, partners and allies for moral support, ideas and talent.

Through trade and immigration, Seattle has huge ties to Asia and the Pacific. But our ties to the Atlantic are strong too. Eric Nelson says some 600,000 Washingtonians self-identify as being of Nordic or Scandinavian heritage, and Ballard has historically been one of the largest Scandinavian communities outside the old countries. Those ties are a strain of our civic DNA.

The new Nordic Heritage Museum is poised to claim a budding role in building and strengthening alliances with like minds. In the new world, Seattle is going to need all the friends — and good role models — it can get.