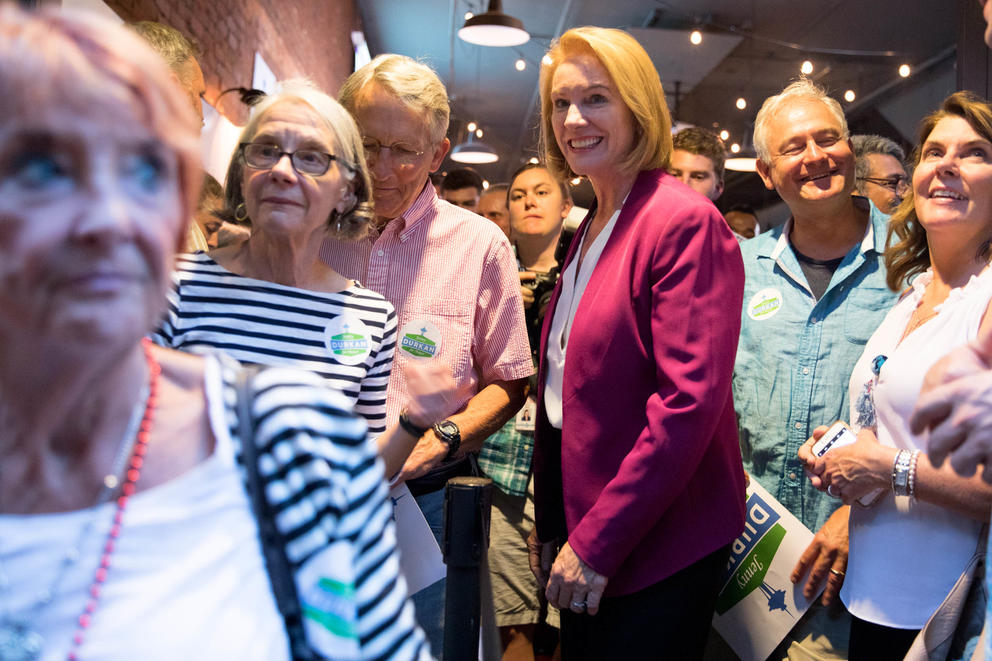 Seattle is a lefty city, but the primary election returns suggest we are trending even further to the left.

Not everyone agrees. Danny Westneat at The Seattle Times suggests that Seattle’s far-lefties “ran into stiffer winds of moderation than expected” with “centrist” Jenny Durkan nabbing 31 percent of the votes (according to the first few days of tallying).

While Durkan’s vote-share puts her in the lead for November, let’s be clear: she’s only a “centrist” in Seattle terms.

Durkan has impeccable progressive credentials, coming from a longtime Democratic political family and having worked for a range of liberal icons from Mike Lowry to Barack Obama. She embraces most Seattle liberal orthodoxies. Her “centrist” label largely derives from the fact that she has strong support from business and is therefore considered an “establishment” candidate. Amazon and Vulcan have given generously to a political action committee funding pro-Durkan advertising.

Still, while Durkan drew about one-third of the vote in the primary, nearly 58 percent of the vote went to candidates even further to the left, including Cary Moon, Nikkita Oliver, Jessyn Farrell, Bob Hasegawa and Mike McGinn.

In the open-seat city council race to replace Tim Burgess — another Seattle liberal who has been widely derided on the left as a conservative — the top candidates to replace him are Teresa Mosqueda and Jon Grant. Both Mosqueda and Grant are to the left of Burgess, with Grant identifying as a “Democratic Socialist.”

Other evidence of the leftward trend is the recent rise of local alternatives to the Democratic party, which still rules in Seattle. Kshama Sawant’s success with her Socialist Alternative Party, Grant’s Democratic Socialists of America, the strength of independent Bernie Sanders here, and Oliver’s Peoples Party all point to lively, yeasty activity on the far left.

Back to the mayor’s race. It’s interesting to note that two of the top progressive candidates who did poorly were ones who questioned Seattle’s liberal orthodoxy on key issues. Hasegawa, for example, is no fan of light rail; he zags on mainstream transit thinking. McGinn pitched himself with a fiscally conservative message pledging to cut spending, and a culturally conservative message promising to “Keep Seattle.”

Both candidates did poorly.

McGinn in some ways is an interesting lesson in Seattle’s move leftward. We chatted on primary election night at Plum on Capitol Hill and the former mayor reminisced about prior campaigns. McGinn was the progressive insurgent and lefty darling of 2009. But in 2017, he observed, “I’ve got candidates to the left of me — that’s new.”

He ran in ’09 on a platform that included universal pre-K, transit and municipal broadband. That was novel for its time but everyone has those positions now.

In the mayoral campaign of 2013, then-candidate Ed Murray refused to be out-lefted by McGinn and pitched himself as more aggressive on police reform and the $15-an-hour minimum wage.  When his re-election bid was still in play (before scandal forced him to drop out), Murray embraced the city income tax, proving that even our “establishment” politicians are very liberal by national and state standards, and when they tack, it’s almost always leftward.

This primary reflected a local trend to limit ideological daylight between progressive candidates. One campaign veteran said this also occurred in the 2013 campaign. “People worked very hard not to have policy differences” in this week’s primary, he said. Apparently, there’s ideological safety in numbers and nobody wants to be caught out on the right.

The result is that it forces voters to decide on other factors — gender, experience, personality. Or, encourages candidates to take very general progressive positions. Everyone wants equity, affordability, to end homelessness, to stand up to Donald Trump and to tax the rich.

That formula likely won’t hold up in the general. With two final candidates to focus on (instead of 21!), people will make comparisons and demand more specifics. A Durkan-Oliver race would offer the sharpest contrasts. A Durkan-Moon race would force Durkan to get a lot more specific about what she would do to solve problems. Moon has offered many ideas, but would likely be challenged on her lack of executive experience.

Seattle’s leftward trend is also energized in part by Trump, which Murray has committed to. McGinn describes anti-Trump fervor as a kind of “burner” beneath Seattle that is activating local politics. Trump has motivated Seattle to become a role model of resistance and resilience for progressive urban politics. We might be seen by some, like one Fox Business Commentator, as a “socialist hellhole,” but here that notion is laughable. We’re imperfect yes, but certainly judging by where the political center is in Seattle politics today and this year’s election, more “socialism” is seen as part of the solution, not the problem.

Cheers and catcalls: The complex histories of Seattle sports stadiums

Sports arenas and stadiums have long been the site of major civic battles.