Hold up, Kelly: Compromise on slavery? 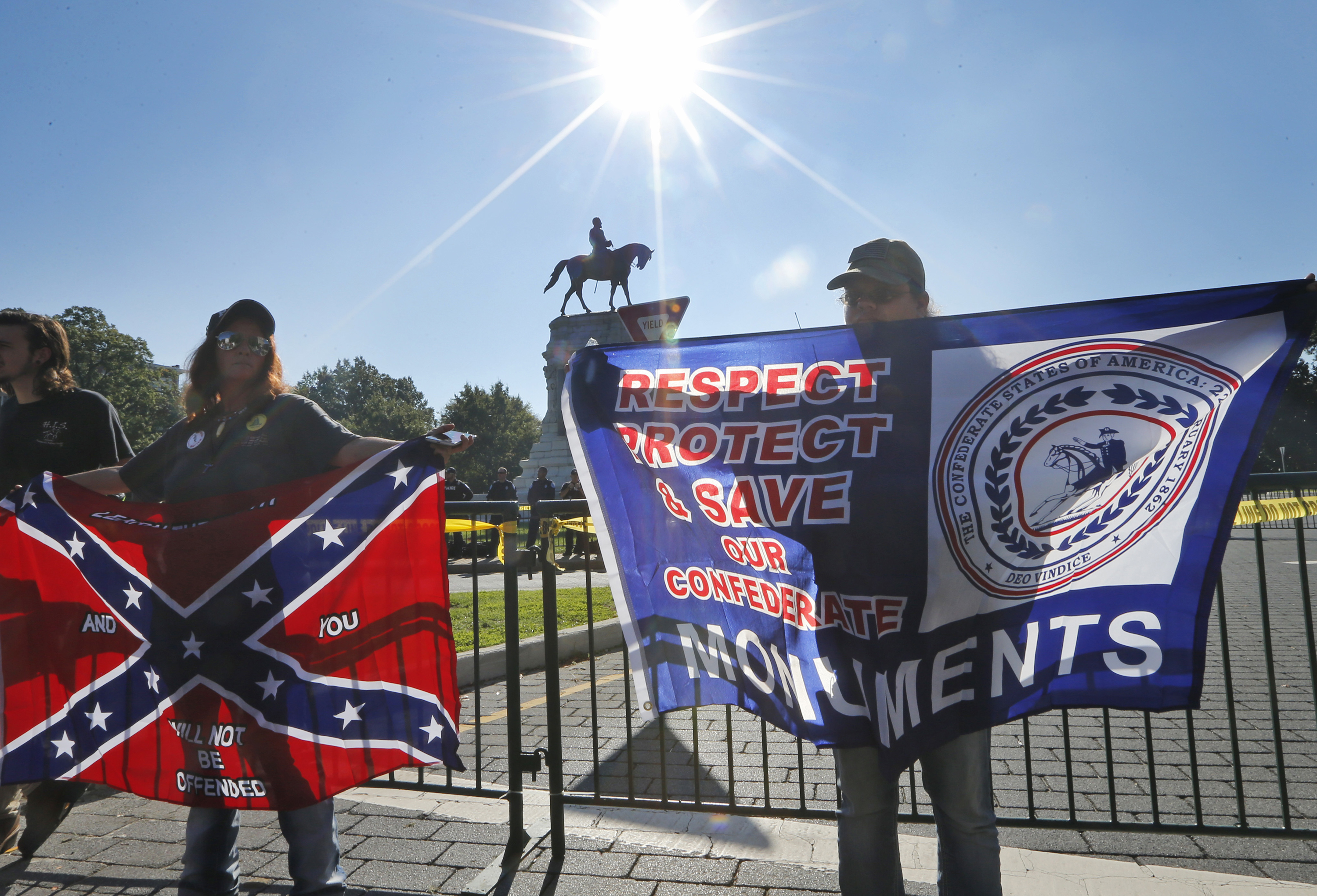 A handful of Confederate protesters holds flags in front of the statue of Confederate General Robert E. Lee on Monument Avenue in Richmond, Va., Saturday, Sept. 16, 2017.

Before a recent downtown breakfast, I chatted with former Republican Gov. and U. S. Sen. Dan Evans. I asked him what he thought about the Senate these days. He shook his head. “We’re still fighting the Civil War,” he said. “Only now the Republicans are the Dixiecrats.”

Indeed, America is still fighting the Civil War and debating what it meant. Since 1865 many believed it meant saving the Union and putting an end to slavery, but as debates renew over states' rights, the Confederate flag and monuments, race, kneeling athletes, Black Lives Matter, white supremacists and the like, it’s pretty clear that the conflict rages on. And many people in power don’t know which side won on the battlefield.

Gen. John Kelly Donald Trump’s chief of staff, is the latest example, extolling the honor and “good faith” of Confederate Gen. Robert E. Lee and suggesting the Civil War could have been avoided by compromise, an echo of a belief President Donald Trump stated months earlier that Andrew Jackson could have worked out a deal that could have avoided the war. Seeing as how just about every compromise was made, attempted, proposed or considered before the war broke out, Kelly’s is an ignorant take on history; “Strange,” “sad” and “wrong” was how it was described by historians to the Washington Post. As many have pointed out, just how do you compromise on slavery?

Can Gen. Kelly — of the Confederate States Army, one might think — say what America would look like today operating under a Civil War-avoiding compromise made in 1860? As one reporter, April Ryan, asked Trump’s press secretary, does the administration believe slavery is wrong?

The asking of that question is commentary on our times. Abraham Lincoln, president of the United States, said that we could not survive as a nation half slave and half free. Does Kelly disagree? Trump spokesperson Sarah Huckabee Sanders called the question “disgusting and absurd,” but the same could be said for Kelly’s theoretical “compromise.”

Compromises failed, war resulted. That does not mean a sustainable or morally defensible compromise could have been reached. In the war’s aftermath, white America forged a political and mythic reconciliation of its warring factions that continues to harm generations of African Americans and people of color. As a result, the peace is unresolved. The Confederacy was beaten, but has not been entirely defeated. Many whites have been taught that Civil War history comes in two equally honorable colors, blue and gray.

One thing that strikes me is after that while defending the “good people” who protested at Charlottesville to preserve Robert E. Lee’s honor, Trump asked rhetorically if statues of George Washington or Thomas Jefferson would be taken down next. Debating the relative merits of historic figures is fine, but he was equating Washington and Jefferson with Lee and Stonewall Jackson. There are differences, but the most striking is that neither Washington nor Jefferson committed treason against the republic; they helped to found it.

It’s one obvious difference in why people might view Washington’s and Jefferson’s legacies differently from Lee’s. Many, in fact most, Americans, including Lincoln, were more concerned about preserving America as a nation than freeing the slaves — and many of them fought on the Union side specifically to preserve the nation from people who took up arms against the United States. Lee could have taken a different path, choosing America over Virginia, but he did not.

Many people faced with that choice did choose their country. One was Isaac I. Stevens, the Washington Territory’s first governor and later delegate to Congress, a human dynamo who played a key role in creating the state we now have. Some of that was good (his surveys), some bad (his treaties). His treatment of Native Americans was abysmal and treacherous. We have many things named after him, including Stevens County and Lake Stevens.

In 1860, Stevens, served as campaign chairman for the pro-Southern, pro-slavery Democratic presidential ticket of John C. Breckinridge and his running mate, Joseph Lane, senator from Oregon. They lost, obviously. Breckinridge went on to become a Confederate general. After the war started, Lane’s electoral stance was widely considered to have been treason, and he returned to virtual exile in the Northwest. But Stevens — though he was politically allied with these Southern sympathizers — chose to fight for the Union, and died in 1862 as a general leading his troops into battle at Chantilly, Virginia.

One can debate today whether Stevens ought to be honored due to his anti-Indian and pro-slavery positions. A good forum for that debate might be an upcoming panel of the Pacific Northwest Historians Guild on our region’s statues and monuments, to be held Nov. 30 at Seattle Pacific University.

I would offer that, whatever you think about Stevens, at least he wasn’t a traitor like Lee, Stonewall Jackson, Jefferson Davis and other Confederate rebels who are still lionized in some quarters, and whose politics are an active presence today, not just in the form of the Confederate and Swastika flag-wielding alt-right, but as a surging strain in Republican politics today, as Dan Evans observed.

If Evans is right that the Civil War is still being fought, it’s right that we figure out who is on which side and take sides ourselves. Even if the our country has fallen short of its founding ideals of democracy, liberty and equality, we need to make sure that Lee and Confederacy remain on the wrong side of history. There should be no compromise on that.