These bikes were made for Seattle 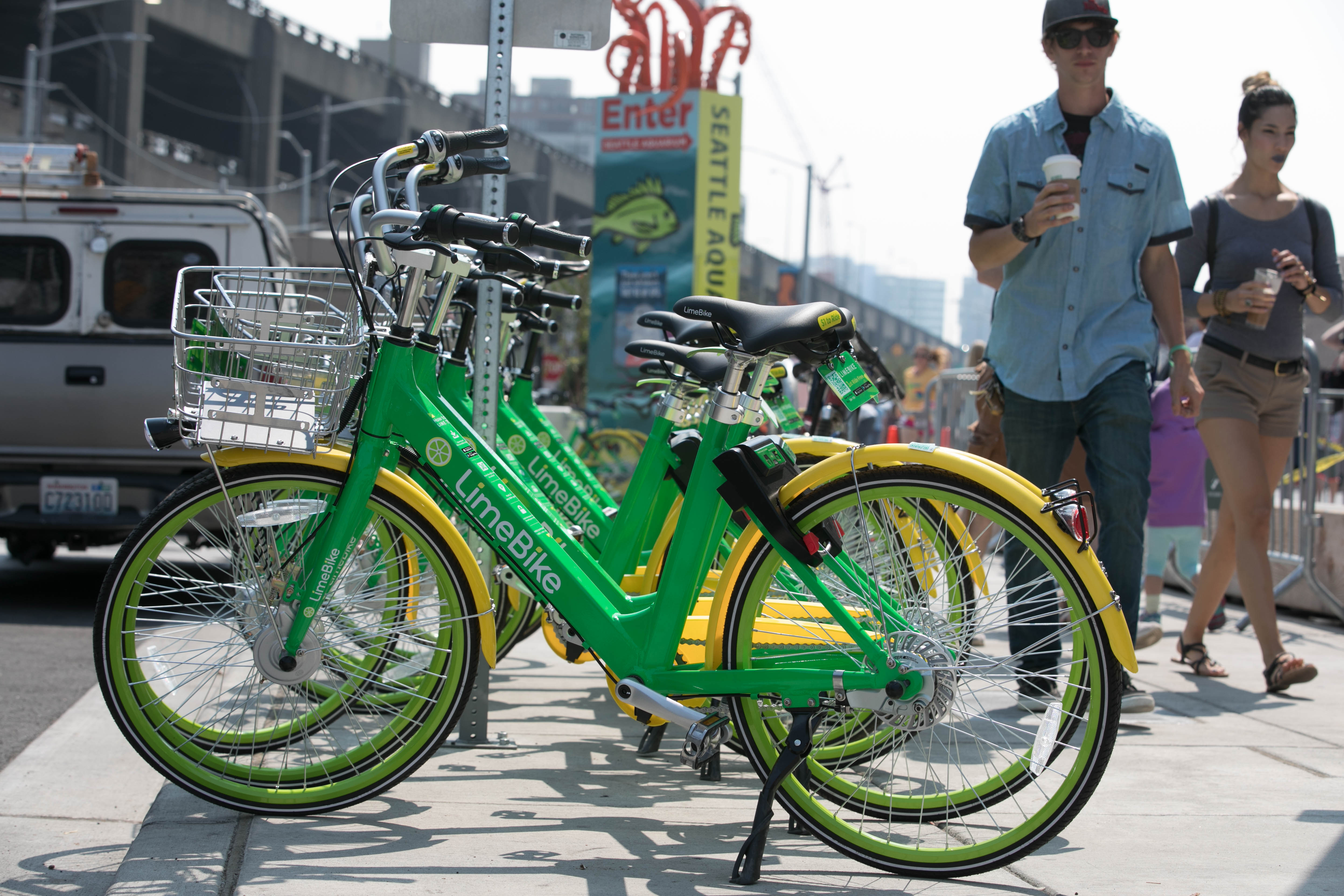 Their tangerine, green and yellow bikes began appearing all over town last summer, often at the end of customers’ rides. You can jump on one for $1 and leave it anywhere, and people have done that.

I saw a lot of bikes clustered in my neighborhood, Madison Park, where riders apparently cruised down from Capitol Hill to the beach, then bused back up, rather than break a sweat. Bikes were left in parks, at the beach, on streets and on parking strips.

Some Seattleites got even more creative, leaving bikes in trees, next to railroad tracks, on stairs and in heaps on sidewalks, locations some have described as “vexing.”

It would be easy to take this cavalier treatment as a sign of failure, or further evidence of why we Americans can’t have nice things. Public amenities in Seattle are frequently trashed or tagged with graffiti — from news boxes to bus shelters. This contrasts with what you often see in cities in, say, Japan or Korea, where things like high-tech street-corner vending machines are commonplace and not vandalized. Still, the casual treatment of Seattle’s bikes seems like a sign of success.

First, we’re riding these bikes, unlike the bikes that were part of the ponderous, station-bound Pronto system that failed here. Second, the casualness with which people are using the new system is a breakthrough. We have endured so many serious and sometimes obnoxious efforts to promote bike riding in Seattle — road diets, the “war on cars” and self-righteous bike anarchists who block drivers, for example — that cycling has taken on the air of an arrogant cause, instead of something that’s fun, useful and ordinary. Bikes have often been freighted with the zeal of advocacy, which has generated unnecessary backlash, such as the ridicule endured by our former cycling mayor, Mike McGinn, dubbed “Mayor McSchwinn.”

But the new approach — grab a bike and go, leave it once you’ve arrived at your destination, wherever that is — is what friends of mine did during the first months of the new system, and the ease of use is far better than a scolding. My pals extolled the ease and utility of biking on a whim. The success of the approach has not gone unnoted. CNN ran a story headlined “How Seattle Morphed from Bikeshare Failure to Industry Leader in Five Months.”

The new bike sharing makes cycling accessible rather than exclusive. It doesn’t insist that cyclists belong to some morally superior class of planet citizen we should all aspire to join. It’s for regular folks.

The new attitude of bike advocacy reminds me a bit of those who sought to create more tolerance for pot — before the marijuana legalization initiative. That is, to normalize it. At first, Seattle voters insisted that the police stop arresting pot users; such civic pressure even convinced the Seattle Police Department to approach the subject with humor, as when its officers passed out bags of Doritos at Hempfest one summer (after legalization). Lighten up was the message.

In the case of bikes, toning down evangelism is a start, but embracing the casual use of bikes — for example, by not insisting riders wear helmets — is a good start. Easing regulations — or informally ignoring them in this case — makes sense, although helmets still are a good idea. My good friend Steve Scher is alive because he was wearing one in a run-in with a car he had last year. Still, it should be an adult safety decision.

Traveling overseas, I’ve been struck by how, in cities that have embraced bikes, there is very little fetishizing of them. Bikes are ordinary; people wear street clothes when riding them, not high-tech spandex. Bikes are ridden not as a statement, but to get somewhere easily in the course of daily life.

One of the benefits of walking and biking is the way it connects you to place and space. Your muscles are literally shaped by the topography, and there’s a better sense of energy expended and its relationship to living in an urban environment.

Last August, I visited an expo in Astana, Kazakhstan, where the theme was the future of energy, and many of the pavilions there featured exhibits where visitors could tap into their own leg-power potential as an energy source. In one exhibit, you could ride a stationary bike in a virtual race against a world champion cyclist. In another, pedaling children turned the parts of a colorful and vast kinetic sculpture. Using your legs gives you a sense of power and proportion. Walking and biking are part of the essential human energy required to keep a city moving.

That was more evident in Seattle’s early development when the bicycle was a disruptive urban technology. Between the 1890s and early 1900s, bikes helped to transform Seattle into a modern city. Residents could move more freely all over town. Seattle had some 25 miles of dedicated bike trails by 1900. It was cheaper to own a bike than a horse, and much less of a headache to care for. The bike craze of that era also led to major road and sidewalk improvements.

By 1910, however, with the arrival of the first automobiles, the cityscape turned to an auto-centric model. Not until the 1970s bike revival, with projects like the Burke-Gilman Trail, did bikes again return and contribute to reshaping the city with more bike lanes and trails. It’s worth noting that one major legacy of the turn-of-the-century bike craze is our boulevard system, which followed and paved those early bike paths.

Now, a new generation is rediscovering human power in reshaping and navigating the city. I think the commitment to making biking ordinary will be rewarded.

One fun thing to note from the expo: While the 1960s promised us Jetsons-style flying cars — a promise that thankfully has not yet materialized — the Czech Republic Pavilion exhibited an actual working flying electric bike. Its speed and distance are limited, but who knows what will be possible in the future? Perhaps the next iteration of Spin, LimeBike and other bike-share programs will offer us a way to pedal ourselves into the air to race against Amazon’s drones. Expect more bikes left in trees.

This story was first published in the November edition of Seattle Magazine.