Bikeshare expands to the suburbs 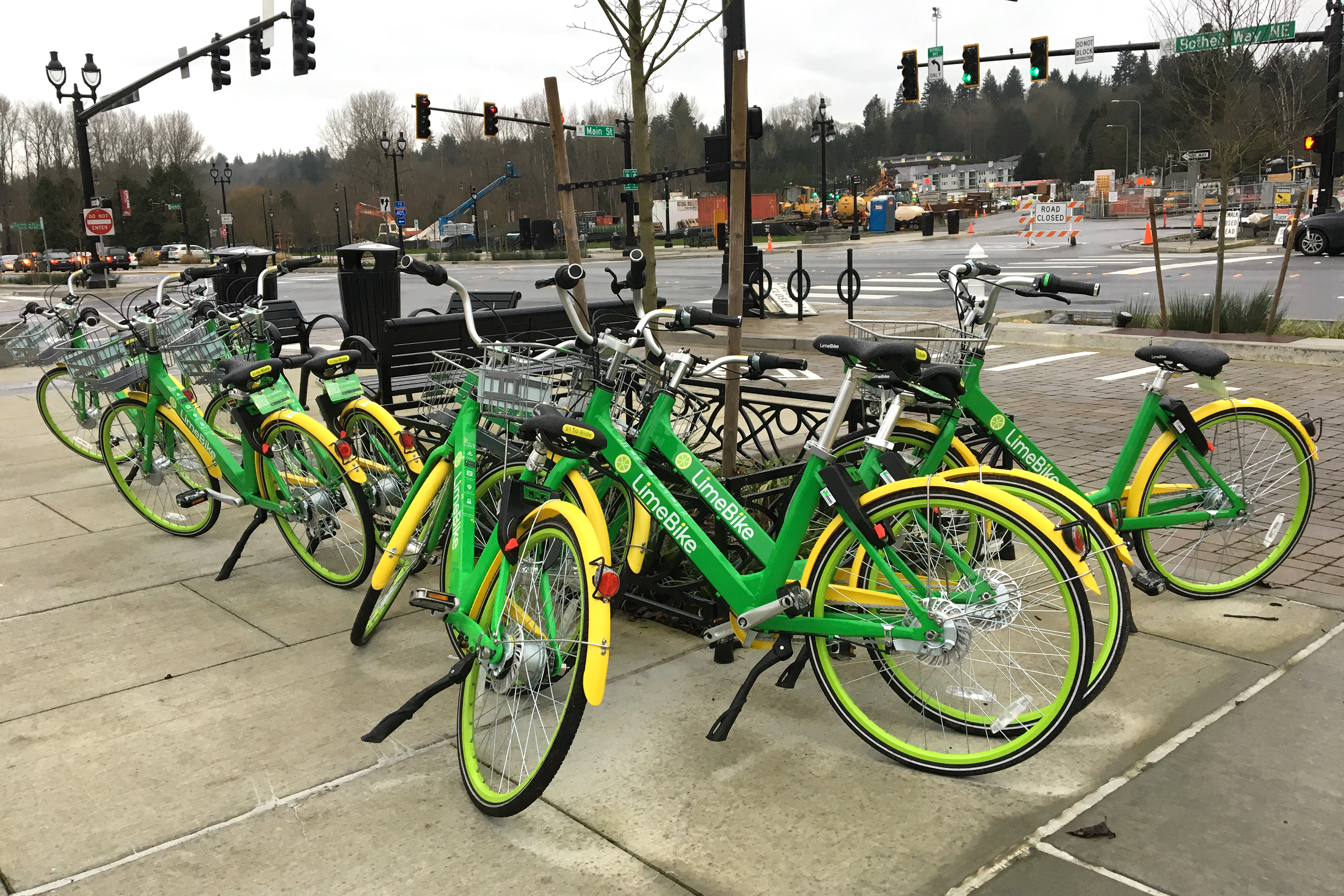 Seven LimeBike bicycles are parked in a cluster near the corner of Bothell Way and Main Street in downtown Bothell on Thursday, Feb. 1, 2018. Credit: Kristen M. Clark/Crosscut

It was as if they appeared overnight. Quite abruptly about two weeks ago, there they were: dozens of green-and-yellow bicycles sporadically parked in clusters along the sidewalks of Bothell's main road, ready for passers-by to rent and ride for $1 an hour.

Such a sight has become the norm in Seattle, where three private bikeshare companies debuted their products last summer to reported success. But in the proud bedroom community of Bothell — 12 miles northeast of downtown Seattle — the influx of dozens of brightly colored bicycles from LimeBike caught residents off guard and incited swift reactions.

A popular Facebook group for Bothell residents was lit ablaze for several days in late January with banter over the bikes. Among the group's 22,000 members, residents posted about 1,200 comments, with some blasting the bikes as "trashy eyesores" and others declaring they "love them" and were eager to give them a try.

A few posed the question: Why were the bikes here when they "belonged" in Seattle?

Well, now, they belong in Bothell, too. Bothell gets to be the guinea pig in the latest example of Seattle's boom having a ripple effect on neighboring suburbs that were once cushioned from the big city, but now are integrally connected in a region where city limits easily blur.

The sudden appearance of the bikes last month was intentional — the first official expansion of private bikeshare into Seattle's suburbs.

LimeBike officials confirmed to Crosscut that they "had a gradual rollout in Bothell" after having seen a significant number of their bikes end up there on trips that began in Seattle. They guess that a large contributor to the phenomenon could be the Burke-Gilman Trail, which winds along waterfronts in north Seattle, mainly Lake Washington, up into Kenmore, which neighbors Bothell.

"All of our bikes have data-tracking on them. What we’ve been doing since they launched in Seattle is watching to see, where do they go? Mostly it's short trips in town, but a lot of the bikes started leaving the city," said Gabriel Scheer, LimeBike's director of strategic development. "A couple of suburbs popped up, but Bothell came at the top."

Whether such an urban transportation as bikesharing will be embraced in the suburbs remains to be seen. Some cities, like Bellevue, are actively exploring the idea, while others are only beginning to consider the need for a formal permitting process.

In Seattle, implementing a bikeshare program came with its own set of difficulties — particularly after the city's publicly funded operation, Pronto, languished and then ultimately failed.

But having private startup companies provide the service — with the city's approval in a permitting program that launched in July — has yielded better results. Between July and November, riders took more than 347,000 trips using the bikeshare bikes, racking up more than 1 million miles, officials with the Seattle Department of Transportation reported to the city's Pedestrian Advisory Board in December.

About 10,000 bikes from three companies – LimeBike, ofo and Spin – now scatter the city of Seattle for use by anyone who simply downloads the companies' apps, uses the app to locate a bike near them, scans a code on a bike to unlock it and takes it for a ride at the cost of about $1 an hour. When the person is done riding it, they park it and lock it back up for someone else to use.

The number of bikes LimeBike initially put in Bothell is less than a couple hundred, Scheer said, but the company has plans to slowly ratchet up that number depending on demand.

On two recent mornings, a Crosscut reporter observed about 40 bikes scattered at various points along the three-mile stretch of Bothell Everett Highway and Bothell Way from Interstate 405 to State Route 522 in downtown Bothell. Many of the bikes were clustered in small groups at key intersections; one was parked randomly next to a tree and another was tossed haphazardly along the side of the road.

It's such parking violations that have drawn a fair share of passionate complaints in Seattle and now in Bothell, too.

But while Bothell residents were surprised by LimeBike's new presence, city officials were aware the bikes were coming. They just didn't know the extent of it, Bothell city spokeswoman Barbara Ramey acknowledged.

LimeBike contacted the city's public works department in November to inquire about what was needed to operate their business in the city, Ramey said. Unlike Seattle – with its formal permitting program that explicitly authorizes companies to set up a bikeshare service – all that was needed in Bothell was a local business license.

"At that point in time, it wasn't very clear what the size and scope of the program was going to be," Ramey said. "That's why we're now going to review municipal code to see if changes need to be made."

For its part, LimeBike praised Bothell as "a leader" in expanding bikeshare to the suburbs. Scheer complimented the city for having "almost non-existent" red-tape and he said the city has been great to work with.

"Across the country, this is a new thing, and cities everywhere are trying to figure out what to do with it. Should we have a business license, do we need a special ordinance, or what do we want to do with it?" Scheer said. Speaking of Bothell, he added, "This is a suburb that’s trying to address reasonable transportation."

Ramey said, "We’re trying to make Bothell more of a friendly place to walk and bike and get around, so from that perspective, (bikeshare) is a great thing." But she added, "We’re trying to balance that with bikes on the sidewalks."

LimeBike isn't oblivious to Bothell residents' recent complaints, either. "There's been a few calls of 'what's this thing doing here?' It's entirely reasonable and expected," Scheer said. Although some residents are upset, he noted: "We are seeing usage, so there is demand."

When Seattle launched its permit program last summer, it was largely breaking new ground in its regulations by embarking on a private bikeshare program of such a scale.

Since there's no technology on the bikes that stops them from going outside Seattle city limits, officials with both the Seattle Department of Transportation (SDOT) and the bikeshare companies are now trying to address how to handle what happens when the bikes are sometimes taken far distances.

That's what ofo does when it notices its yellow bikes go astray, spokesperson Taylor Bennett said.

"Folks can ride them where they choose, so we see bikes end up in a variety of places," he acknowledged, adding that their local operations team will typically round up bikes when they notice the bikes aren't where they should be or if they stay in one location for a few days.

Bennett said ofo is also looking to expand into the suburbs and mentioned Bellevue as a possibility. "I think as more people understand and become familiar with ofo, the more they see the value of adding another transportation option to the region and offering people an affordable way to get around."

Officials from Spin, the third company that's permitted in Seattle and that markets orange-colored bikes, did not return an email request for comment for this story.

In some suburbs, officials say it hasn't been a bother to see the colorful bikes from Seattle dot their sidewalks, so long as they're parked correctly. (For instance, users aren't supposed to block sidewalks, street corners or driveways.)

The bikes have been seen in Kenmore frequently since last summer, said city manager Rob Karlinsey, who praises the concept of bikeshare for offering alternate modes of transportation that are readily accessible to residents.

"We're not objecting to it," he said. "We’re not a grumpy city. We kind of go with the flow as long as there’s no major problems."

And there haven't been any so far in Kenmore, he said. "The users have been responsible in parking (the bikes) in logical locations. We’ve seen them at our various parks and people park them in a place that’s not in the way, so people have been really good about that," he said.

If more of the bikes made there way into Kenmore, though, Karlinsey said the city would likely start exploring a permitting program like Seattle's. "I think it’s important that we coordinate with all the other cities so we have the same rules so cyclists aren’t trying to guess what the rules are," he said.

Meanwhile, Bellevue is looking into adopting a bikeshare-permitting program of its own. A city survey last fall found overwhelming support for the concept, and the issue is expected to go before the city's transportation commission in March for formal consideration, associate planner Andreas Piller said.

"It's still to be determined what shape a (bikeshare) program might take," Piller said, but he acknowledged there's "some inherent influence" from Seattle's program, since it was adopted first.

"We’re trying to look to make a program here — if one should proceed — that fits local needs and addresses concerns of our own local stakeholders," Piller said.