Who has the backs of backcountry skiers?

A new group is advocating for backcountry skiers, who sometimes find access to the slopes challenging. 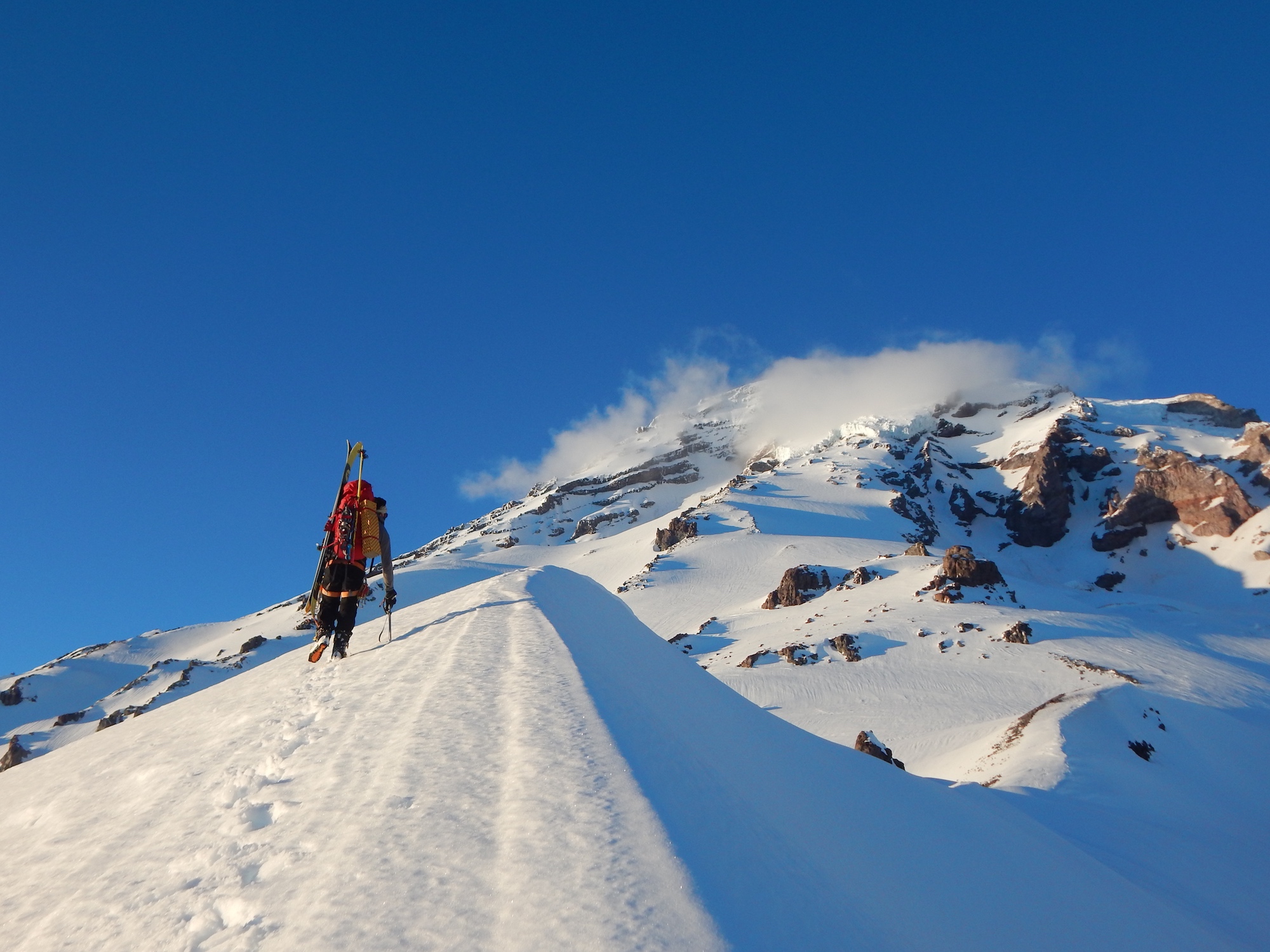 Conrad Wharton, founder of the Cascade Backcountry Alliance, heads up a slope at Mount Rainier National Park to make a ski run. (Photo by Rowan Stewart)

Crystal Mountain Ski Patrol Director Kim Kircher was detonating explosives in December 2016 as part of routine avalanche control in a rugged part of the resort known as Southback. On her way down after blasting the slope, she encountered a backcountry skier traveling up toward Threeway Peak, where she had just intentionally triggered an avalanche.

“He didn’t know anything about Crystal and where he was,” Kircher recalled a year later, clearly irritated. “He thought he was outside the ski area boundary.”

As a result, Crystal tightened its uphill policy to take a favored playground off-limits to backcountry skiers.

For Conrad Wharton, that decision was the straw that broke the camel’s back, pushing him to found the Cascade Backcountry Alliance, a group in its first season of advocacy.

In a region where every outdoors enthusiast seems to have an organized voice — The Mountaineers for climbers, Washington Trails Association for hikers and snowshoers, Evergreen Mountain Bike Alliance, Cascade Cycling Club — Wharton felt that it was time for local backcountry skiers to get organized.

But backcountry skiers are generally rather solitary in their activities. They go up the mountain under their own power, using climbing skins and adjustable bindings that allow them to travel uphill like a free-heel cross-country ski, then switch over to a locked heel for a downhill run no different from a typical alpine ski setup.

“Crystal’s issues were a pretty big catalyst,” Wharton, a 27-year-old Seattle-based mountain guide, told me in a cozy Greenwater cabin after a recent ski tour near Crystal. “People had warned about this happening and everyone ignored that being a possibility.”

So the closure of the Southback area at Crystal was a big wakeup call, even for those not used to thinking of themselves as part of an organized group. “As soon as that happened, people realized there’s something to lose.”

The sport has been popular among diehard regulars at Crystal for as long as Kircher, a resort veteran since the early 1990s, has been there. Back then, any issues were resolved with a friendly chat over an après-ski drink at The Bullwheel or The Snorting Elk. But with what Kircher describes as “exponential growth” in the last five or six seasons, Crystal’s backcountry is crawling with what Kircher calls “a whole new crowd I’m not just going to see at the bar.”

Anecdotal accounts from outdoors shops suggest backcountry skiing is the fastest-growing segment of the market, with the SnowSports Industry Association reporting an 8 percent annual increase in the sale of backcountry-specific skis and boots, a total of $25 million in gear sales, during the 2013-2014 season, the most recent season for which the trade group makes its market reports public.

While there are no hard numbers on backcountry ski traffic in the Cascades, the chatter on local online message boards like Turns All Year definitely suggests that our booming population is also booming in the mountains. But our unique geography also creates unique challenges as backcountry skiers jockey with other groups that like to play in the snow.

When the snow piles up across the Cascades, there are only a handful of reliable access points, nearly all of which feature ski resorts or some other competing use. Our mountain passes that are plowed in winter are also home to the Summit at Snoqualmie, Stevens Pass, and White Pass ski resorts. Roads plowed up to the snow line terminate at Mount Baker Ski Area and Crystal Mountain. The Paradise area at Mount Rainier National Park claims to be the snowiest place on earth, but winter access operates on a strict 9-5 timetable with frequent delays in opening the gate on the road from Longmire.

Mount Rainier aside, when the snow is deep and the skiing masses come out in force, there are potential conflicts at all elevations — from parking competition at resort lots to uphill access at ski areas. And then there are questions about being able to reach trailheads that go unplowed in winter and Forest Service regulations on where snowmobiles are allowed versus human-powered only travel.

Wharton, a 27-year-old native of Girdwood, an Alaska ski town, and his fiancée, Marina Fitzpatrick, apparel buyer for Ballard gear shop Ascent Outdoors and a fellow founding member of the Alliance, took me out on a recent winter day to illustrate the potential areas of concern facing backcountry skiers in the Cascades.

The Crystal parking lot was already filling up as skiers headed for the highest-elevation resort in the state. No one checks whether skiers are paying customers or backcountry users, but with the lots at both Crystal and Stevens known to max out on busy days, that’s one of the Alliance’s areas of concerns.

Taking a cue from Oregon, they have suggested that all Washington ski area parking fall under the purview of the Sno-Park Permit, which is something of a winter version of the Discovery Pass that nearly every outdoors-loving resident buys annually. (Kircher called that idea “punishing our customers.”)

After checking to make sure our avalanche beacons recognized each other — an essential tool for backcountry safety — we strapped on our climbing skins. As skiers queued up at the foot of the Rainier Express Gondola, we veered away from the resort crowds using a section of the Pacific Crest Trail to climb into an area known as Bullion Basin.

While no slight to ski resorts, which are where everyone who ultimately develops a taste for the backcountry first cuts their teeth, backcountry skiing is a much quieter endeavor, more akin to hiking than resort skiing. Our skins slapping on the snow made a zipper sound as we ascended through pines along the narrow trail that zigzagged its way up the mountainside. After an hour, during which we encountered just a lone snowshoer, the trail opened up into the bottom of the basin.

To our left, Wharton pointed out the charred remnants of the recent Norse Peak forest fire, which the Forest Service has declared off-limits for the time being as the forest recuperates. Wharton pulled up a map on his smartphone to indicate the nearby Crystal boundary line to our right that came into effect under the stricter uphill policy.

That rock-and-a-hard-place scenario leaves backcountry skiers with just a narrow sliver of terrain at one of the more popular trailheads in the region. Communicating what terrain is fair game has been one of the Alliance’s early accomplishments, with Wharton creating easy-to-read digital maps.

Acknowledging the Alliance’s work, Crystal’s Kircher said, “Everybody has been asking us for a map, things for which we wouldn’t necessarily have the technical knowhow nor the time. Our mandate is to keep people safe in the ski area boundary. Someone coming here for uphill travel isn’t necessarily our customer.”

The organization is still in its infancy, incorporated in Washington last September and with fiscal sponsorship from the Winter Wildlands Alliance. The seven core founders have an e-mail list of 300 to 400 but would hesitate to call them members. They’re mostly curious local skiers, a mixed bag that can range from cubicle-bound weekend warriors to those with flexible or part-time work that lends itself to winter ski bumming on off hours. (Count nurses, flood-claim adjusters, and freelance journalists among them.)

“It’s a battle to get the resorts to see that we’re all part of the same community,” Wharton told me as we dried out in the cabin after skiing fresh lines in Bouillon Basin. “A lot of those people with touring gear are going to be riding the lifts the next day.”