Is there a Republican in your future? 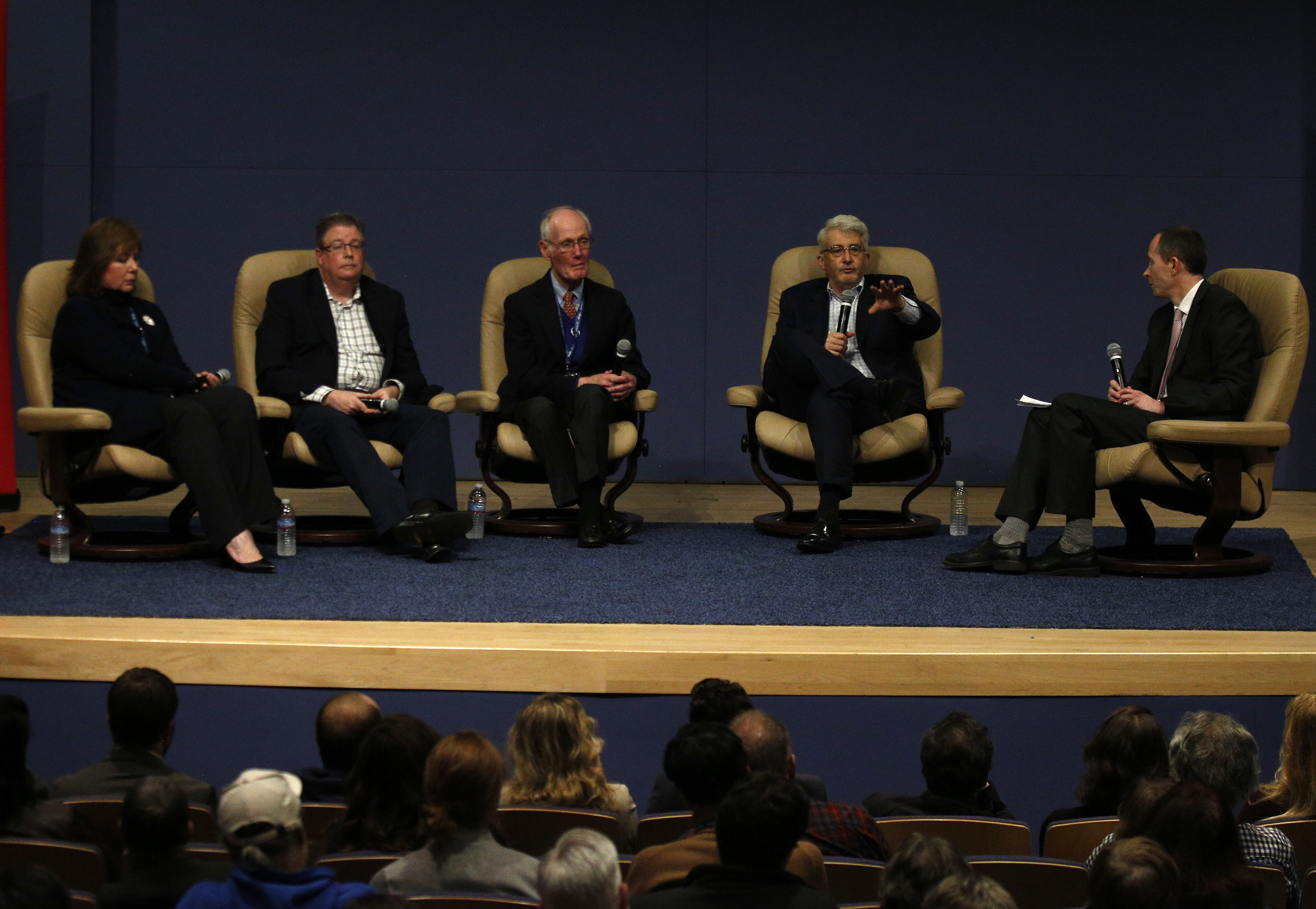 The provocative name of the panel was “The GOP is Dead. Long Live the GOP.” Folks in Seattle might not generally care about the fate of the Republican Party in this state — many would prefer it dead — but it was a rare chance for the public to witness a largely internal debate regarding the impact of Donald Trump on what it is to be a Republican in Washington state these days.

If my travels outside the Blue Bubble of Seattle this last year have taught me anything, it’s that understanding GOP politics is important to grasping the state’s political landscape, and psyche.

The panel featured a gathering of state Republicans at the Crosscut Festival at Seattle University earlier this month. The panel members ranged from a party elder statesman to the King County party chair, from a former gubernatorial candidate who opposes oil drilling off the Washington coast to a former state party chair who has quit the party. The basic question was: Can Washington’s Republicans survive Donald Trump? And if so, how?

Before the panel I chatted with conservative commentator John Carlson who looked at the panel’s lineup and noted that most of the Republicans on it were not Trump fans. The exception was Lori Sotelo, King County Republican Party chair, who let the panel audience in a packed auditorium know that it was her job to be a cheerleader for the party ticket, from Trump all the way down to dogcatcher. (Sotelo made the news after a recent social media exchange with a critic of the GOP stance on gun control who accused the party of “complicity” in school shootings. She told the critic “don’t ever contact me again,” and ascribed the ensuing uproar over her response to “Anti-Trump Leftist Haters.”)

Trump skepticism, however, was precisely the point of the gathering. If Washington Republican candidates want to appeal to independent and suburban voters, can they find ways to differentiate themselves from what’s going on in the other Washington? For 2018, at least, pollsters have indicated the tide is likely with the Democrats. Trump’s proposals — opening up the coast to oil drilling, cutting back cleanups of Hanford and Puget Sound among them — have put the president at odds with state priorities, especially environmental ones. And with the Republican Party enabling Trump in so many ways, including appealing to so called alt right nationalists and white supremacists, can Washington’s GOP escape that taint?

In addition to Sotelo, the panel included former state attorney general and U.S. Sen. Slade Gorton, the party’s gray eminence at age 90; former Seattle port commissioner and GOP candidate for governor in 2016, Bill Bryant; and former state party chair Chris Vance, the GOP’s candidate for U.S. Senate in 2016. Vance refused to support Trump during the campaign and has since left the party to form an independent centrist movement. Public radio’s Olympia expert, Austin Jenkins, asked the questions, eliciting very different views on the state of the party.

Gorton was the most sanguine about the party’s future. He said that both parties had, and always have had, extremists under their umbrellas and that pendulums swing from one end to another. His view seemed to be that of looking at the party in terms of geological time: slow movements occurring across the ideological spectrum, with the assurance that destruction will be followed by rebuilding.

As Washington’s attorney general from 1969 through 1980, Gorton was part of relatively moderate GOP control in Olympia, marked by the liberal Republicanism of governor Dan Evans, who served from the mid-1960s to the mid-1970s. Gorton was elected to the U.S. Senate in 1980. During his time in Washington, D.C., his personal pendulum seemed to swing from Evans-like moderation to Ronald Reagan-style conservatism. His tenure was marked by what was then mainstream conservative GOP thinking, with a bit of an independent streak.

He still strongly believes in the party, regardless of Trump and the far righties. The party will regain balance, in his view, and has not lost its effectiveness in the state. Despite statewide losses, there have been gains. With the Democrats in very narrow control of the state Legislature, Republicans could regain control. In 2016, the GOP picked up a statewide office (treasurer Duane Davidson) and re-elected the only other statewide GOP officeholder, Kim Wyman, by a large margin despite Trump’s solid rejection by state voters. Gorton is also high on the prospects of the GOP retaining the Cascades-jumping 8th Congressional District in the Republican fold with Dino Rossi, who once narrowly lost the governorship. The party lives, despite Trump.

Related article: Democrat, Republican and something in between?

In contrast, Chris Vance is outspoken that the state GOP is at a dead end. The party of Trump is wrong on race, immigration, free trade and fiscal management. This not only creates a practical political barrier for the state party but a moral one. The suburbs are turning blue, the party has turned away from sensible centrism and instead embraced radical, nationalistic notions that are toxic in this state. Vance said, “There is no doubt that the Republican Party has become nativist, isolationist, protectionist and this is the agenda of the John Birch Society and the Know Nothings, not … Ronald Reagan’s party, which is what I joined up for.”

Vance’s critique is particularly potent because he once ran the state party. He says his views haven’t changed; the party has. He is still stunned by the Republicans’ refusal to repudiate Trump. Indeed, when he became a never-Trumper in 2016, his campaign funding sources dried up due to his apostasy.

Gorton’s reply: “Chris is just looking through the wrong end of the telescope. The Republican Party in Congress … has passed a regular Republican agenda on taxes and a number of other things.” Where Vance sees a party betraying its core beliefs, Gorton sees a party working for reasonable changes and one that is a somewhat moderating influence on Trump. Gorton says Vance’s critique is focused on a “very small category” of extremists: “He is not talking about the direction of the Republican Party in either the Legislature or our Congress.”

Lori Sotelo’s view of the party in King County is perhaps different from Gorton’s, and certainly Vance’s. She insisted that no members of the “alt right” were part of the GOP she knows, though the audience expressed skepticism. Even Gorton admits that there are some far-right fringers under the GOP tent, but Sotelo is likely referring to outright white supremacists. But certainly the Trump administration is speaking — or dog-whistling — to this group, courting their support. Sotelo also reminded the audience that Washington only sent one Trump delegate to the 2016 national convention, with the rest supporting Ted Cruz. This was offered as evidence that the GOP here was not necessarily in the tank for Trump, though this was hardly evidence for a party of moderation.

Bill Bryant puts himself forth as the kind of Republican who better reflects the Northwest’s onetime tradition of moderation. He thinks the Republicans in Washington are “operating differently” than the national Republicans, focusing on different issues. He cites the old PEMCO insurance ads that claimed people here are “a little bit different.” Bryant, for example, has come out strongly against the federal government allowing oil drilling off Washington in the Olympic National Marine Sanctuary, he embraces the kind of green GOP image forged in the Dan Evans era. “We need to go back to those roots.” He claims the GOP tradition in Washington is also egalitarian and pro-education spending.

Bryant thinks if the state GOP embraces that old approach, they can win statewide. It’s been a long drought. The late John Spellman was the last GOP governor in Washington, elected to a single four-year term in 1980. He was of the school of Republicans that Bryant would like to see resurge. He refused to answer whether he is planning another run for office of not, but certainly talks, and evades, like a potential candidate.

Vance says Bryant’s moderate Republican approach isn’t a winning formula. “It doesn’t work,” he says. King County moderates run for state office — Vance himself, Rob McKenna, Dino Rossi, Bill Bryant — and they still lose. One problem for Republicans, Vance says, is that moderate party leaders would lose their positions if they opposed Trump “because the base loves Donald Trump.” Second, politics is no longer local but national and the state GOP cannot duck the party’s national brand. And certainly Democrats find reminding people of that brand helps them in statewide elections.

So the panel offered a variety of answers to the question about where the state  GOP is. Soleto says the state party is loyal, but more than Trump. Gorton argues that the current state of affairs is a pendulum swing away from normalcy, which is prevailing in Congress. Bryant says Republicans should embrace their popular conservationist heyday of the ’60s to woo independents. And Vance says the brand is dead, time to move on.

The debate about the state party’s future is certainly not dead. You can hear the full panel discussion below.