The man who put Seattle on the world’s map

Jay Rockey was very responsible for the success of the World's Fair and the shape of Seattle today. 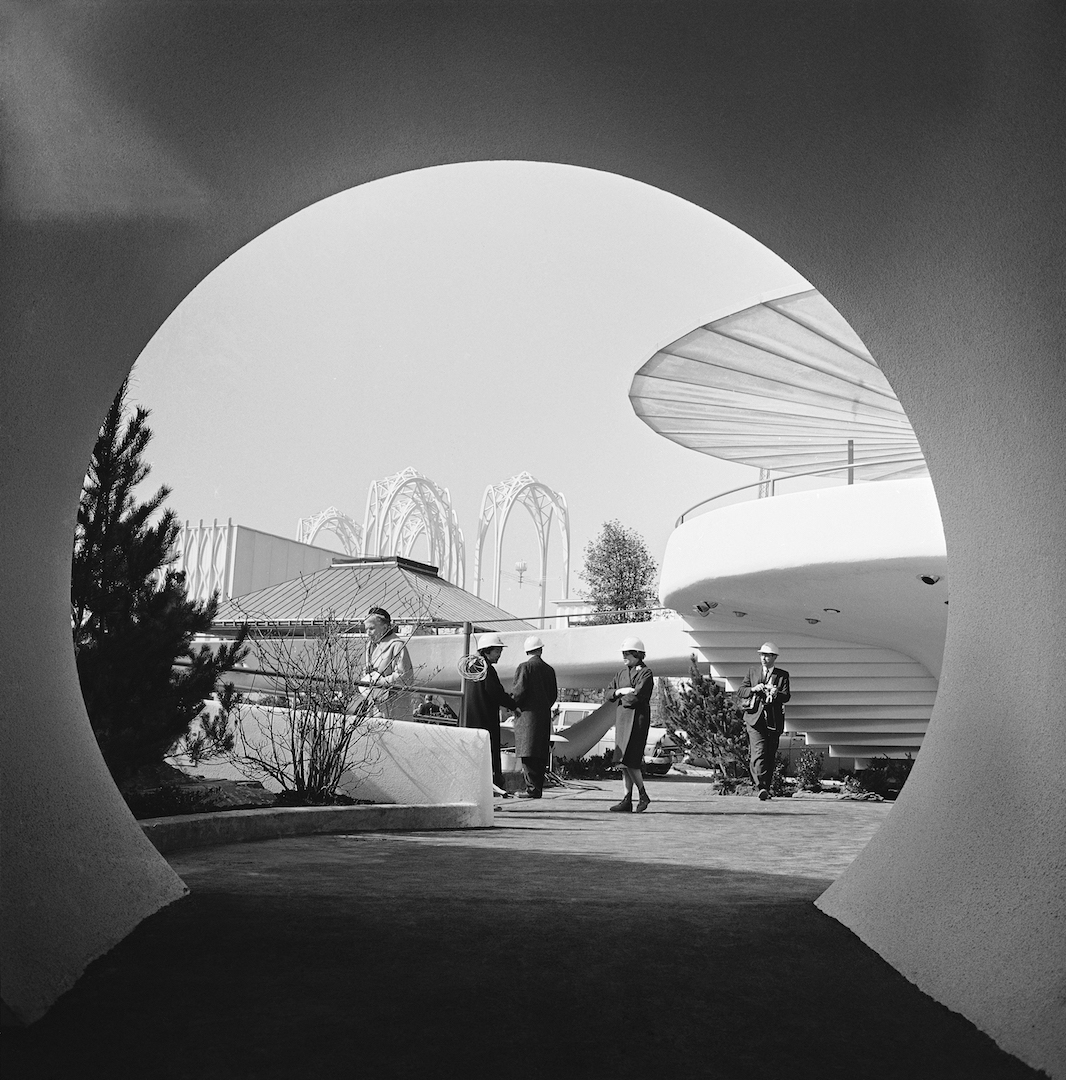 Wandering through the grounds of the Seattle World's Fair, visitors wear helmets as protection because of the construction work on April 13, 1962, that is still going on. At the moment they're standing inside the Washington State Public Utilities exhibit. In far background are the space Gothic arches of the U.S. Science Pavilion. (AP Photo)

As I write this, I am sitting in a restaurant at the Fairmont Olympic hotel, formerly the Olympic Hotel and what was ground zero for the Mad Men era execs and conspirators who planned Seattle’s 1962 Century 21 Exposition. That expo was the grand coming of age party this then-remote burg grew to “put Seattle on the map.” It was hoped the fair would gain Seattle a reputation as a city important to creating the future, a future that is still playing out in South Lake Union and the Spheres of Amazon.

Seven o’clock breakfasts at the Olympic were where fair strategies and ideas were hatched to pull off a global event by a small cadre of local dreamers in the pre-Internet era. Among the regular attendees was a young PR man named Jay Rockey — raised in Olympia, a grad of Washington State University, a U.S. Navy veteran, and a key player in the Seattle World’s Fair saga. It was Rockey, the public relations man who sold the fair to local ticket buyers, and the world.

Rockey’s death was announced on March 2. He was 90, the last surviving member of the key World’s Fair leadership team and a man who was very much responsible for its success and the shape of Seattle today.

The fair was, in many respects, a young man’s game and an outsider’s affair. The business community at the time was conservative and skeptical. What resulted was leadership that didn’t stem from power centers like the staid Rainier Club, nor from the pockets of Seattle’s old establishment. The fair’s board chair, Eddie Carlson was head of Western International Hotels, a regional hotel chain that is now Westin, and led the effort. Carlson aside, it was a game for younger or less prominent civic risk-takers willing to bet Seattle’s image on a dream.

Rockey had not intended to work for the fair. He had been living in New York as a top PR exec — at age 32 — for Aloca, an aluminum manufacturer. He was thriving there and it was, he told me years later with salty frankness, “a fucking great job.” While visiting Seattle in 1960, he connected with an old colleague who was working for the fair. He walked in the day his friend walked out, and was offered the job. After some hesitation, he was seduced by the adventure and a chance to work near his old home turf. It paid $15,000 per year and would end in two years.

Rockey was tasked with boosting advance ticket sales to give fair exhibitors and Seattle residents confidence that this wasn’t going to be a civic flop — and skeptics abounded. It was Rockey who pushed to change the expo’s name to the Seattle World’s Fair, a more sellable concept than an old-fashioned-sounding “exposition.”

The staff, Rockey remembered, was mostly young and green —  the last U.S. World’s Fairs had been held in 1940, so there was no pool of talent to tap into. There was “no time to learn,” Rockey told me in an interview in 2011.

But it worked. Advance ticket sales spiked to more than 3 million after the Space Needle rose and people could see that the fair was actually happening. It towered over the city like a Jetsons-era Eiffel Tower and became one of the most recognized urban skyline symbols in the world. Rockey proved a publicity whiz — he got the fair on the cover of two issues of LIFE magazine in 1962, the gold standard for publicity.

The fair had the blessing of President John F. Kennedy and his New Frontier politics, which was a youth movement in itself. It painted Seattle as a city of technology, optimism and possibility. NASA had a pavilion there — its first ever. Boeing set up a recruiting office near the fairgrounds to lure young engineers. Seattle was STEM before STEM was cool.

Rockey was good at crisis management and dealt with a few fiascos during the fair. The fair-run Expo Lodging organization was criticized for poor management and misleading people on housing demand. It led to local hoteliers and landlords losing money even as the crowds turned out in strong numbers (a total of 10 million eventually walked through the fair gates).

A lodging outfit in Redmond went bankrupt during the fair and stranded hundreds of fairgoers, owing $95,000 in un-refunded advance payments. On Rockey’s advice, the fair stepped in and wrote checks to visitors and would-be visitors. It made a big dose of negative publicity go away at a critical time and the fair fortunately had the funds to fix the problem.

Rockey also realized that Seattle’s was the first TV-era World’s Fair. He embraced the new tech, he told me. “We made TV stories and shipped them to stations all over the country. My staff had a couple of people that did nothing but that, people I hired from the broadcast industry.”

A profitable fair, massive publicity, a new civic center and a port city rebranded for the space age? The fair’s smashing success made Rockey’s reputation. He turned down offers in order to stay in Seattle, and in 1963, created his own public relations firm, which eventually became very successful as The Rockey Company.

He has been credited as the man who invented modern PR in the Northwest. Rockey trained a new generation of PR professionals and became a legendary guru to a roster of Seattle’s big companies and civic players — Microsoft, Boeing, Nintendo, Airborne Express, United Airlines, Weyerhaeuser.

One thing about Rockey: He stayed in the background. Newspapers rarely mentioned him. He was smart, professional, wise and friendly with a great sense of humor. His work exhibited none of the negative qualities — pushy, brash, clueless, grandstanding — sometimes associated with the profession. I cannot imagine Jay Rockey ever sending spam.

It’s time he get the recognition he deserves for putting the fair on the map, which put Seattle on the map. Though, as he would acknowledge humbly, it was a group effort.

Disclosure: Knute Berger is consulting historian for the Space Needle.