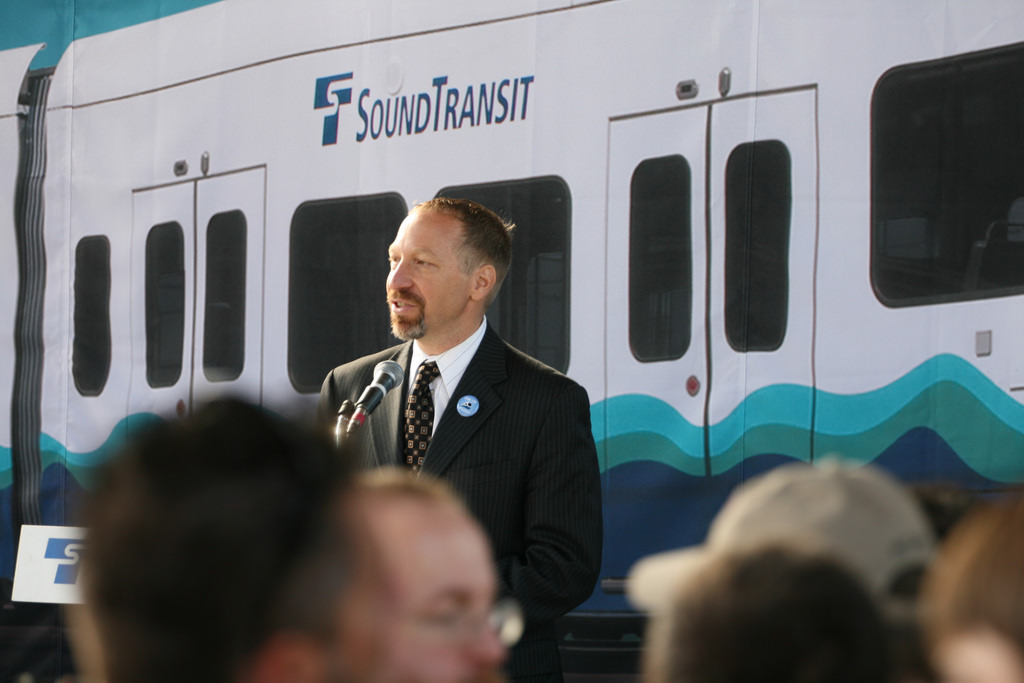 The Sound Transit Board of Directors on Thursday publicly aired what have been long-simmering complaints against CEO Peter Rogoff, one of the highest paid public employees in the region, for his conduct as head of the multi-billion dollar transportation agency.

The specifics of the allegations against Rogoff are laid out in a report drafted by attorney Steven H. Winterbauer and just released by the agency. The report, combined with public records of complaints against Rogoff provided to Crosscut, show a staff taken aback by Rogoff's rough style. Some of his behavior was described as bordering on sexism and, on one occasion, racial bias.

Mayor Jenny Durkan, a member of the board, said “statements and actions that were alleged to be made by the CEO raise the issue of racial bias and insensitivity as well as other workplace harassment issues.” Other board members said they remained confident in his overall leadership and his ability to address the concerns.

In response to the allegations, the board voted against giving Rogoff a raise and approved an action plan that would send Rogoff through leadership development and subject him to oversight from three appointed board members. With a 5 percent cost of living adjustment, Rogoff will earn $328,545 this year.

However, Durkan and Seattle City Councilmember Rob Johnson voted against the measure. "The conclusions reached by our counsel demonstrate that Sound Transit is not felt to be a safe workplace for employees, that they feel they cannot act without repercussions and there are many who feel their work is not valued,” she said.

“I do not believe these issues have been resolved,” she added.

Speaking after his vote, Johnson told Crosscut he'd only just received the Winterbauer report the night before and was still digesting its content. He said he felt the plan for Rogoff was not specific enough. "I want to see what specific things the leadership agree on before I can feel comfortable with the direction," he said. Johnson added he does not think Rogoff should be fired.

Sources tell Crosscut that board members have been made aware of a fractured relationship between Rogoff and some employees at the transit agency dating back to 2016, including several specific complaints.

Winterbauer's report and public records of employee complaints detail some of the specific allegations.

In one instance, reads the report, "during a Black History Month luncheon, the CEO reportedly made comments condescending toward persons of color insofar as he reportedly stated or implied that African Americans require more mentoring and assistance than their counterparts to succeed in a professional setting."

Winterbauer wrote in his report that Rogoff felt his comments were taken out of context, adding, "His precise words were not recorded and recollections are incomplete and inconsistent."

Additionally, one employee complained that Rogoff had called her "honey," which she felt "disregarded the depth and breadth of her experience and diminished her role."

In the report, Winterbauer says Rogoff "acknowledged his actions, agreed they were inappropriate, understood how they could insult or offend regardless of his intentions, and pledged not to behave similarly in the future."

More broadly, the report described a belief that Rogoff lacked basic leadership skills such as, "humility and acknowledging his own mistakes; listening; creating space for others to think independently and creatively and periodically err without fear of repercussion" and more.

The number and significance of the complaints were enough that in June 2016, members of Sound Transit’s executive committee were briefed, Crosscut learned. In response, Sound Transit elected to hire a consultant to “coach” Rogoff as well as other members of the executive team on how to better interact with employees.

“I know you are buried with the city budget, but could you give me a call this evening or tomorrow,” he wrote. “Need to alert you to an issue and find a time to brief you next week or so (the sooner the better). The call will take less than five minutes.” Johnson and Brown met the following week.

In response to the complaint and in anticipation of Rogoff’s upcoming annual performance review, the agency brought on Winterbauer to look into some of the complaints brought to the executive board.

Additionally, the agency just closed a request for a proposal for more “mediation and coaching” services for members of the executive team. A copy of the request was provided to Crosscut by one of the many consulting firms who bid for the job. It reads, “The purpose of the coaching is to support the employee’s efforts to improve their performance at the Sound Transit workplace. The outcome is to achieve transformational growth and the development of key managers and executives resulting in a higher level of leadership performance and greater job satisfaction.”

It continues, “For workplace mediation services, mediators shall facilitate communication between those in dispute and assist in the development of a mutually acceptable agreement improving their future working relationship.”

The bidding process closed Feb. 23 and a vendor is slated to be hired in April.

Some board members praised Rogoff's work delivering regional transit, as well as his efforts to improve his interpersonal skills. "While his performance has resulted in improvements delivering transit projects and services, his professional conduct must also exemplify the high standards the Board expects from all employees," Redmond Mayor John Marchione said in a statement. "While we find that the CEO has fulfilled the remedial actions directed by the Board in 2016, the Board has also determined that he should take additional steps to improve his demeanor and relationships with staff under his direction."

Before coming to Seattle in 2016, Rogoff was the Under Secretary of Transportation for Policy in the U.S. Department of Transportation, the department’s third-highest-ranking official. Before that, he was President Obama’s Federal Transit Administrator.

When he was hired, Rogoff immediately set to work on Sound Transit 3, a $54 billion package to expand regional light rail and other transit services. It passed comfortably in November 2016.

Rogoff succeeded CEO Joni Earl, who is often credited with having saved the agency from possible collapse in 2001 and 2002, before it even laid its first mile of light-rail track.

In terms of leadership style, however, there was a notable difference. Earl set an upbeat, even warm atmosphere even though she was known for driving herself and her staff hard, working extremely long hours. And she let people know if they made a mistake — including the board members who had the power to fire her. But Rogoff was known, at least to some staffers, as ready to send an angry email at any deviance from his expectations, even with work that would probably never be used in any significant way. People lived in expectation that “he is going to have a fit,” said one longtime Sound Transit employee who worked directly with Rogoff.

“[Earl] really made a point of knowing people and knowing what their background was, their family,” said the person. “[Rogoff] was not doing any of that.”

In defending his vote in favor of offering Rogoff more training, Constantine said when Rogoff first came to Seattle, his style offended his “Northwest sensibilities,” but added, “I believe he has made significant progress of becoming a better manager.”

In a statement, Rogoff blamed his East Coast style for the issues, especially in 2016 when he first started. "Prior to coming to Sound Transit, I was accustomed to working in environments where, when you were producing a major piece of work at the core of the agency’s mission, it was 'all hands on deck, 24/7.'"

Rogoff pledged to do better. "Just as Sound Transit is an agency that strives for continuous improvement, I too seek to continually improve my performance based on new inputs and challenges. As such, I embrace the Board’s latest direction and will continue to work with staff and Board Members to become an even more effective leader. My workplace demeanor in early 2016 was the wrong approach. I take full responsibility for it. I apologize to the Board for it today just as I apologized for it during my 2016 performance review."

Sound Transit has about 800 employees. Although Rogoff is not slated to get a raise, he will get a 5 percent adjustment for inflation, bringing his salary to $328,000 a year.