WA to protect against voting discrimination with new law 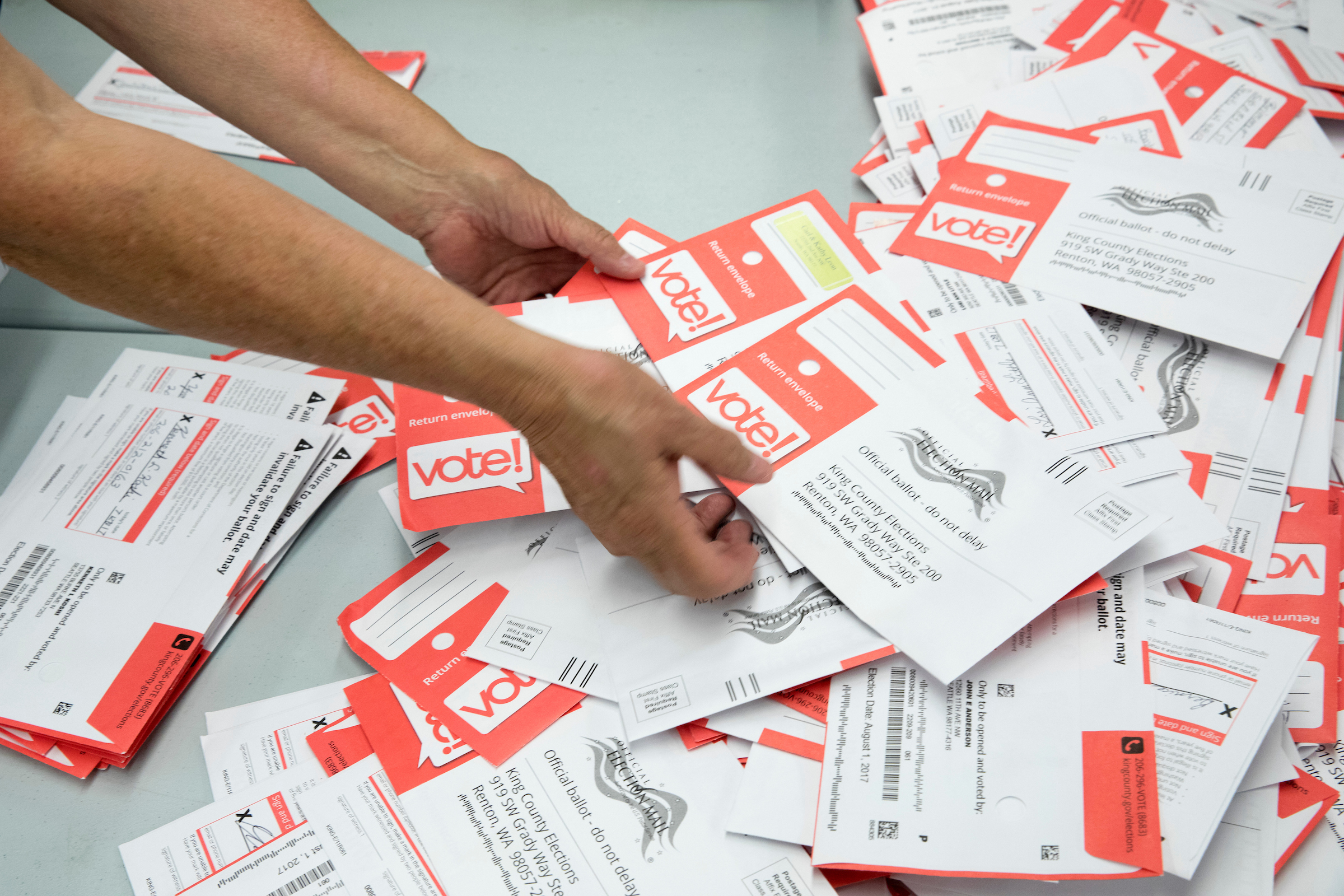 Ballot envelopes are sorted at a King County Elections office in Renton, WA on July 31, 2017. (Photo by Matt McKnight/Crosscut)

About five years ago, the American Civil Liberties Union of Washington sued Yakima, arguing a new system of voting was needed if the sizeable number of Latinos in the city was ever going to have a shot at electing leaders who represented their interests. After years of costly litigation, a U.S. district judge's order led Yakima to switch to district-based voting in 2015.

“The Legislature finds that electoral systems that deny race, color, or language minority groups an equal opportunity to elect candidates of their choice are inconsistent with the right to free and equal elections,” reads the final version of the bill.

The measure awaits a signature from Democratic Gov. Jay Inslee, a supporter of the proposal. Once it’s signed into law, Washington will officially become the second state in the country to enact a Voting Rights Act. California approved similar legislation in 2002, which served as a model for Washington's bill.

It’s a big win for advocates of the bill, such as the sponsor of the measure, Sen. Rebecca Saldaña, D-Seattle. Supporters tried to pass the legislation for five consecutive years but were able to get the state Senate to approve it only after Democrats took control of the governorships and state Legislature last fall.

Proponents of the Voting Rights Act argue that the biggest winners will be the people and communities where elected officials better represent the entire area's interests. They say a history of racially polarized voting — where minority voters are voting one way, and non‐minority voters are voting another — means certain municipalities are in violation of Section 2 of the federal Voting Rights Act of 1965, which “prohibits voting practices or procedures that discriminate on the basis of race, color, or membership in one of the language minority groups.”

When candidates compete under an at-large election system (such as in citywide or countywide elections), racially polarized voting — especially if it's heavily polarized — make it almost impossible for minority leaders, such as Latinos, to break through in certain jurisdictions.

Take Yakima as an example. Despite Yakima’s sizeable Latino population — more than 40 percent — not one Latino had been elected to the city council prior to 2015. But after the new, district-based system was implemented, three Latinos were elected to the council. Experts foresee rapidly changing communities like Wenatchee and Tukwila taking advantage of the new, statewide legislation.

The communities with the biggest gaps between Latino population and representation tend to be in central or eastern parts of the state, but Skagit County in the north Puget Sound area also has a significant gap. 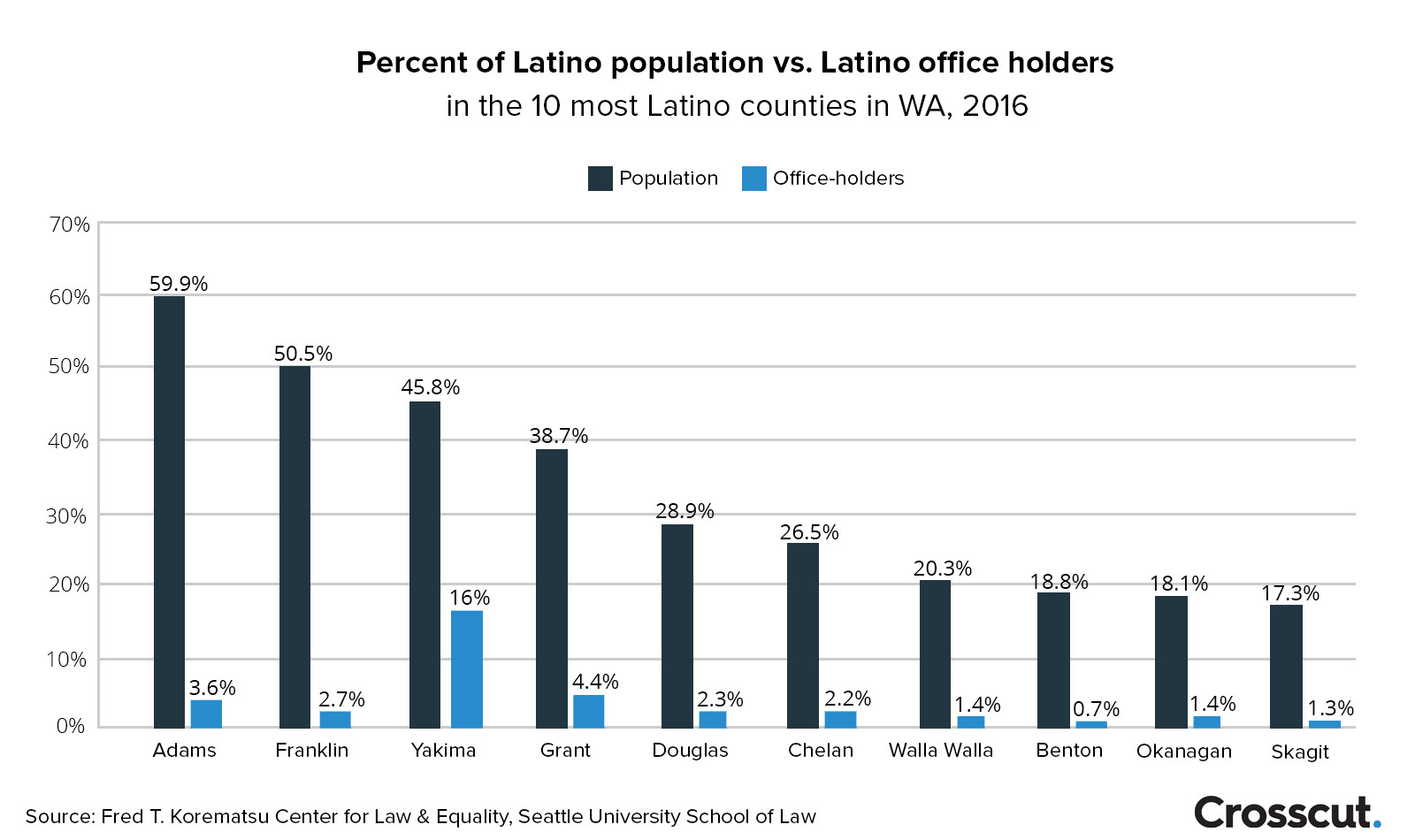 The new legislation would allow individuals in various municipalities to issue a complaint and request a switch to district-based voting. Municipalities in violation of the Voting Rights Act would then have 180 days to resolve the matter. The legislation also calls for the public to be notified of the proposed election change. If a resolution isn’t reached within the 180-day time frame, then the matter heads to state court.

Experts say early cases are likely to be challenged. The goal, however, is to help Washington cities save money by ensuring they do not follow Yakima's example, which, in the end, spent nearly $3 million fighting a district-based system.

“This is an opportunity to create a less onerous, less expensive process,” said Rich Stolz, executive director of the immigrant advocacy organization One America. “We know this kind of policy can have a significant impact on ensuring a more diverse electorate.”

“There’s real potential to make our democracy stronger and more representative through the Voting Rights Act.”

Seattle attorney David Perez, who says he feels personally invested in the issue because his parents are political refugees from Cuba, first drafted the legislation in 2011 when he was fresh out of law school. “It’s been a long fight … but boy, oh boy, things are looking up,” Perez said.

Perez says it's important that minority groups throughout the state have leadership that reflect their interests in order to avoid disparities in basic services such as trash removal, street lights and bus lines. School boards, for example, should reflect their community, Perez said. If a school board in a heavily Latino area can't get a Latino elected, then those schools might miss the opportunity to hire a Latino principal or mentor and retain Latino teachers, who would, in turn, be able to better connect with the students. 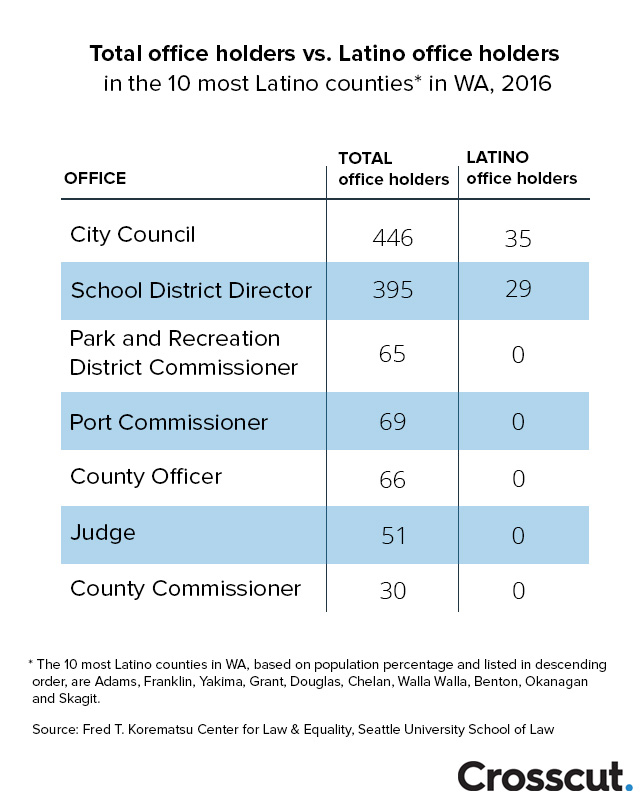 When asked what race stands out as an egregious example of a minority candidate losing due to racially polarized voting, Perez pointed to a state Supreme Court race in 2012, when Justice Steven González faced a little-known challenger, Bruce Danielson. Despite González boasting a stellar resume with 10 years on the King County Superior Court, he had a tough race against a less-accomplished lawyer, who had hardly raised any money or campaigned. The vote in most counties actually went against González, who was saved by a big vote in some of the state's most populous counties.

“This should have been game over,” Perez said. “That González race changed the narrative. It proved to [people] this might not be as crazy as they thought.”

“Nobody really believed us. Nobody really thought this was going on, that Latinos were being excluded because of their last names,” Perez continued.

“It just became a matter of either you deny math or you don’t," Perez said. “Unfortunately, the political reality took a lot longer to catch up.”

Matthew Barreto, a UCLA professor who has served as an expert witness in about a dozen Voting Rights Act cases, says racially polarized voting tends to be more of an issue in small cities, where district-based voting is often lacking.

“All you have to do is look at your representation. If it doesn’t approximate the population, you probably have a problem,” Barreto said. “The interesting thing about this is it’s all data-based, it’s not advocacy. It’s a very sort of cut and dry formula.”

Barreto also argues that an added benefit from the Voting Rights Act is increased voter turnout because “they start to think government reflects their interests.” And it's not just race that is at play here, Barreto says.

With district-based voting, farmers, renters and other groups of people are more likely to have their interests represented. When Seattle, for example, opted to elect most City Council members by district in 2015, neighborhood activists and issues suddenly became more important.

The bottom line, Barreto said, is districts are “supposed to represent geographically compact communities of interest.”

“What we’re trying to do is recognize demographics have changed,” Barreto said. “Save our local governments lots of money and make sure their governments reflect their communities.”