Come to Seattle — just don’t bring your car with you 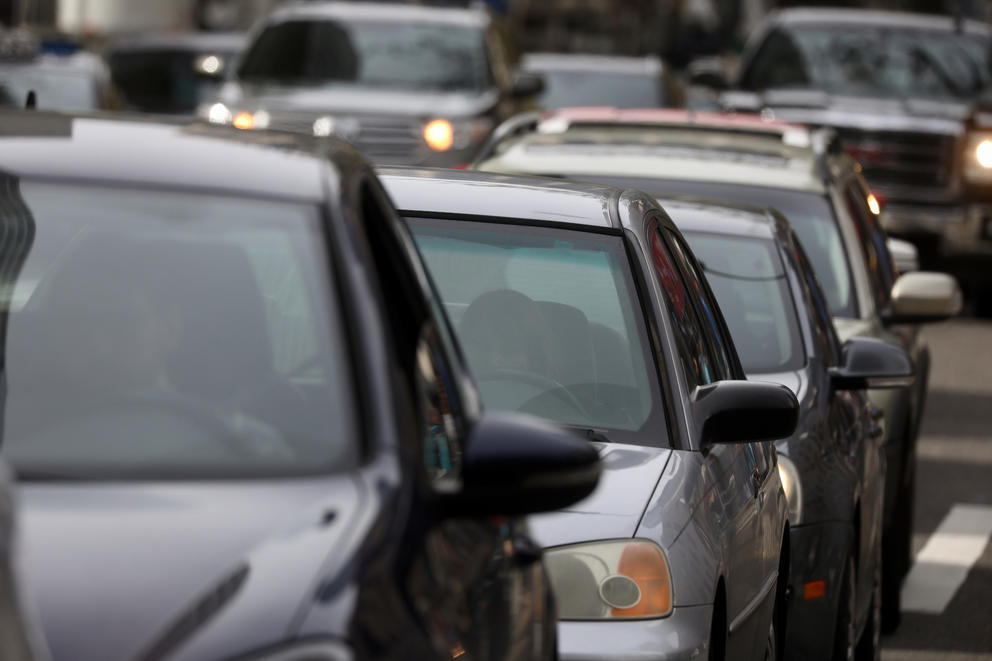 For anyone who has traveled I-5 South over the double-decker bridge above Portage Bay, there’s a familiar if fleeting vista. The downtown skyline beckons across Lake Union while the Space Needle stands solitary and aloof to the side.

One Sunday earlier this month, just as issues around transportation heated up in the city, I soaked in the view while standing in the lower deck’s shoulder, part of the I-5 express lanes. Around me, some of the 7,000 cyclists taking part in the Cascade Bicycle Club’s annual Emerald City Bike Ride took selfies and meandered across the lanes. In the off-ramp tunnels that empty into downtown, they hooted and hollered to coax a subterranean echo.

As we rolled across I-5 and the soon-to-disappear Alaskan Way Viaduct, the twin arteries for moving cars through the city center, the ride offered a chance to reflect on what have been genuinely dizzying weeks of transportation policymaking about the future of how we get around our city.

First, Mayor Jenny Durkan halted ongoing construction of the Center City Connector, which would stitch our two separate streetcar lines together with dedicated lanes along Firstst Avenue. Then, her administration postponed a promised downtown protected bike lane by another three years. Transportation activists at Seattle Subway and Transit Riders Union have every reason to be concerned, at least privately, that these moves may herald further backsliding on agreed-upon public transit, pedestrian improvements, and bike infrastructure in the 2015 voter-approved Move Seattle Levy.

On the flip side, the city council approved smart new regulations that would relax minimum parking requirements and allow more flexible use of existing parking.

Most importantly, Durkan made a bold political pronouncement by tentatively endorsing decongestion pricing, the idea of charging a variably-priced toll for driving in downtown.

The flurry of decisions did not go unnoticed, to say the least. Two columnists for the Seattle Times, Danny Westneat and Jon Talton, quickly attacked the decongestion pricing — or congestion pricing, as it’s often called less positively — as the wrong way to solve problems.

And one Times letter writer, Linda Atkins, a lawyer who lives in Enumclaw, grumpily summed up all the changes aimed at reducing cars’ dominance: "When the city finishes paring all the parking spaces and driving lanes, and starts charging a fee to enter the golden arches of its gated enclave, I won’t be renewing my [ballet] season tickets, or going to Seattle to shop or see the dentist. It won’t be worth the hassle and expense. The welcome mat seems no longer out in Seattle."

Atkins has the right metaphor but the wrong, if widely shared, attitude. Actually, the welcome mat is still out, provided visitors leave their shoes at the door. Cars are those shoes, and trampling inside our house while wearing them leaves a mess.

For decades, we've been forced to roll out the welcome mat for the region, and frankly anyone traveling the entire length of the West Coast, to walk through our house with their shoes on. Federal and state transportation priorities long ago carved a wound through our city with an interstate highway, after which local voters failed to approve a federally-subsidized mass transit system. Finally, a new generation is starting to be stricter about our house rules, and that's only fair because we live here 24/7 and don’t just pop in for occasional visits.

While the Times letter’s "golden arches” and “gated enclaves" description came, somewhat ironically, from an attorney at a prominent national law firm, she has a valid point. Living in Seattle is expensive. We pay dearly for the privilege and should pursue every approach possible to bring down house prices and rents so more people can afford to live here.

On the transportation front, city and county leaders deserve credit for offering low-income fares, a loan fund to put affordable housing near transit, and an explicit equity-first policy. The results speak for themselves. Solo drivers dropped to just one-quarter of downtown commuters last year as more people take transit.

As we work to make Seattle more affordable, we also have the right to make the city a more pleasant place to move around for those who live here. That means the few miles we must travel within the city on foot, bike, or public transit should take priority over the last few miles of a trip from the suburbs by car.

And if casual suburban visitors choose to leave their shoes at the door, say by taking the Sounder from Everett, Link from Angle Lake, or Express Bus from Bellevue, they’ll have the same privileges as the rest of us when they brandish their Orca cards, hop on a bikeshare, or walk through town. I’m aware these options aren’t perfect, from the Sounder’s snares with mudslides on the tracks to chronically full park and rides, but neither is driving into downtown.

As I pedaled along I-5, the tired “war on cars” trope seemed even more hyperbolic. People on bikes can ride the highway one day per year — some of us grinned passing a “Bicycles Prohibited” sign — and are shunted to the earliest daylight hours of Sunday morning so as to least inconvenience drivers. At grade level, cyclists have to share the road, a handful of protected bike lanes and trails aside, every hour of every day. From the I-5 bridge near the University of Washington, I squinted below to make out the Burke-Gilman Trail’s asphalt sliver from a new perspective: It looked about the width of a highway shoulder. If there is a war afoot, cars have been winning for a long time.

As a car-centric society, we all get behind the wheel and presume that we can travel anywhere at 60 miles per hour — even through the heart of the city. That’s the failed promise of I-5 and the Viaduct. But what if 12-to-15 miles per hour is the new aboveground normal in the urban core? Riding along these car-free concrete behemoths made that speed feel less like a bitter pill to swallow and more like a better pace of life, one to enjoy on my Craiglist find of a commuter bike along with the parents toting children, who far outnumbered spandex-clad racing cyclists.

Like many fellow Seattlelites — but increasingly fewer households — my wife and I own a car. Our house pre-dates the driveway era, so we park on the street, with such supposedly crowded conditions that nearby Seattle University and Swedish Cherry Hill fully subsidize our residential parking permit, even though I can count on both hands how often we’ve had to park around the corner. There’s a 40-unit apartment building with no parking slated for the end of the block. It may mean more parked cars, but our city needs more housing and that should take priority over any possible parking woes, though I wish that proposed mandatory affordable housing requirements were already in place.

Neither of us drives to work, but our grey Subaru Outback — the third identical model on the block — makes its fair share of trips to the mountains. If decongestion pricing means a peak-hour car trip to REI might cost a few extra bucks, that’s a price I’m willing to pay. And I will probably be more likely to consider alternative ways of hauling my purchases home.

The Puget Sound region’s attachment to cars even in urban areas has been my most surprising discovery since moving from the East Coast. While some aspects of Seattle’s growing pains are simply tragic, like the rise in homelessness, watching the region grapple with the transition to a car-lite lifestyle is a fascinating drama as we lead the nation in urbanization.

So the next time you reach for the car keys by the door, I’ll leave you with this chestnut from a recent pundit on KUOW’s The Record: “You’re not stuck in traffic, you are traffic.”