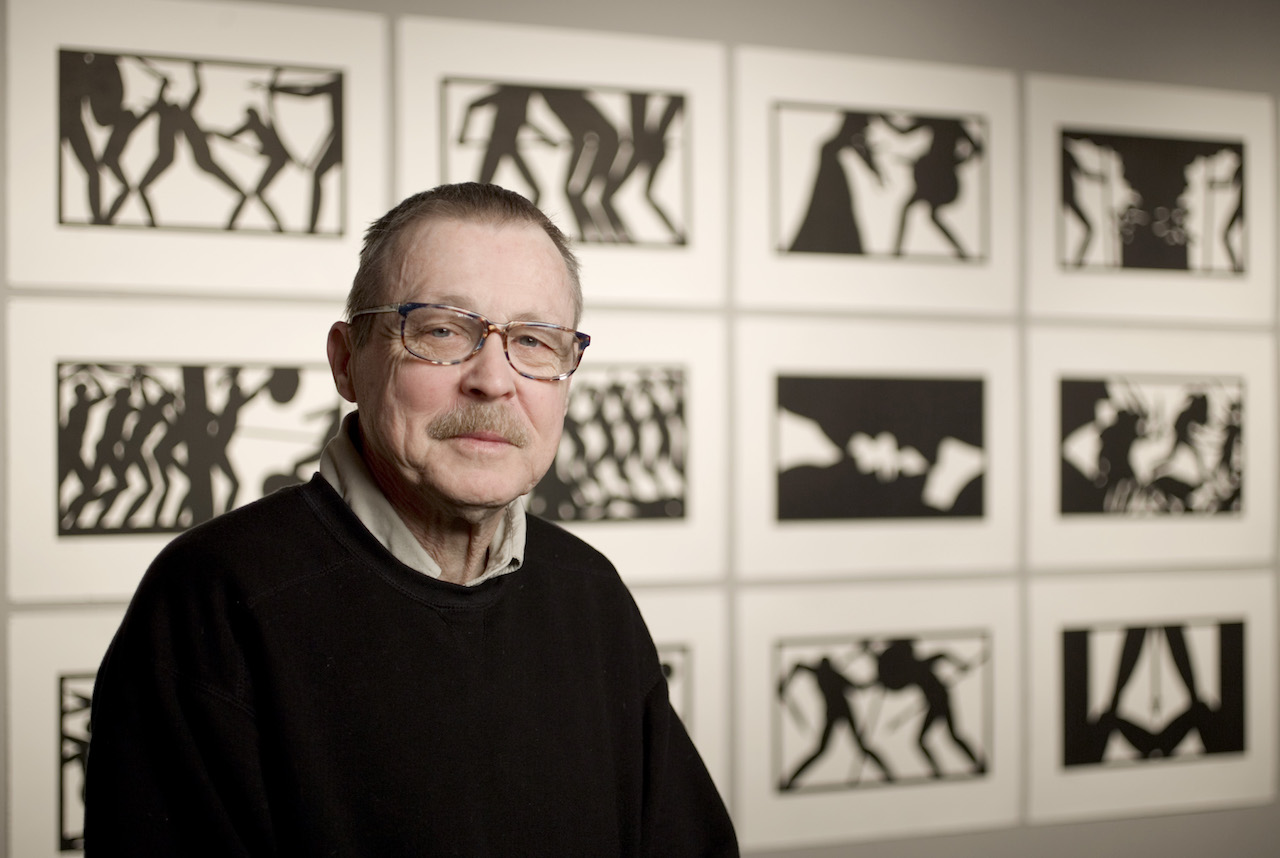 Michael Spafford at the Francine Seders Gallery in 2008. His work is currently being shown simultaneously in three Seattle galleries  (Photo: Spike Mafford)

Spafford’s paintings at Greg Kucera Gallery and Woodside/Braseth Gallery (through May 26) and his prints at Davidson Galleries (through April 28) offer a chance to revisit the ever-evolving interpretations of classical mythology — Hercules’ twelve labors, Icarus falling from the skies, the Minotaur lurking in its labyrinth, and more — that Spafford has explored in his Seattle basement studio for close to sixty years.

In the shows, you can see the artist coming at these tales in dozens of ways. Key images repeat and then take reinvented form. Monsters greet our gaze as if they’re one of us. Battle scenes emphasize the lust in “blood-lust.” (There’s a reason some prudish Olympia lawmakers found Spafford’s 1981 mural, “The Twelve Labors of Hercules,” too hot to hang in the state Capitol Building.)

For all its thematic consistency, it’s a remarkably wide-ranging body of work, taking gritty, bleary form in the paintings while assuming silhouette-sharp clarity in his woodblock prints.

The “Epic Works” exhibitions are a family affair. After Francine Seders, who represented Spafford for 50 years, closed her Seattle gallery in late 2013, Spafford’s son, photographer Spike Mafford, and his wife, Lisa Dutton, realized they needed to pick up where Seders had left off. Spafford is 82 years old and hadn’t had a museum show since 1993. An extensive archive of his work had been in storage, unseen for years.

“We had a list, but we didn’t know what the work was,” Mafford said recently at his Magnuson Park studio where his father’s work is kept. “Once we got it back, and he started looking at it, and we started talking about, we realized, ‘Oh my god, we’ve got to get it out so the public can see it.’ Our first thought was a museum exhibition. And that time frame was too long for me. I wanted to do it while he can still enjoy it.”

“We really felt that if the collection were managed properly,” Mafford says, “it would bring him back into the contemporary discussion about art and what it means to be a lifetime artist.”

Spafford taught at the University of Washington for 30 years, and many of his former students have taken an interest in the show. “It’s been great,” his son says. “Everybody has pitched in.”

The artist himself would probably be happy, his daughter-in-law says, to keep painting away in the basement of his Montlake house where he and his wife, painter Elizabeth Sandvig, have lived since 1963. But he’s pleased the work is in public view again.

Spafford was interviewed at his home in Seattle's Montlake neighborhood.

What was your first encounter with classical mythology?

I did take a Latin class in high school, and I do recall making pictures of the Underworld. It just appealed to me. But after that, I guess most of the mythology that I saw was in paintings that I saw in books. Probably the reason I started doing mythology was because I was in college and I was doing quite a bit of painting on my own, as well as going to class.

The paintings I was involved with had to do with automobile accidents, and I remember trying to make paintings and drawings of women giving birth. That sort of thing. And the work was not received very well by my friends. I think I showed them to a couple of my teachers, and they didn’t like them either.

Did they say why not?

One of them said, “Well, the reason is because you’re trying to paint real things, and what art does is it deals with metaphysical things, not physical things.” So, I went home and got the dictionary and looked that up, and it mentioned mythology. So, I took an automobile accident and turned it into Icarus. And then women giving birth became origin myths. So that’s how it started. And I don’t have much imagination, so I just kept doing the same thing. The more I did the mythology, the more I began to learn about it, and one thing sort of led to another.

Scraping and sanding the canvas became a big part of what you do. Was that in an effort not to rely on the drawing abilities that came to you naturally?

I don’t think so. Actually, it sort of evolved. My first paintings didn’t have any scratching on them at all – they’re just painted. One reason why there’s the scraping is because I can’t get it right the first time. So, I have to scrape it off.

You seem to feel free to tweak the myths for your own purposes. For instance, you make Hercules’ last labor a confrontation with death itself.

In portraying episodes from mythology, you often alight on an image that you use again and again over the years. For Hercules’ cleaning of the Augean stables, for instance, it’s the silhouette of a man thrusting a shovel downward between his legs, like a spear-tipped weapon. What’s involved in arriving at that image? Do a lot of images you try wind up on the cutting-room floor, so to speak?

That’s right. … I actually make subtle shifts. Like probably, originally, I wouldn’t have had the legs spread so far apart. Of course, people read it as phallic. But a lot of the myths, particularly the Herculean myths, are very phallic: the snakes that come up and he cuts them off, and all of these things. So, I make it as phallic as I can.

I sort of think of painting as I think of crossword puzzles. I think that people who can do crossword puzzles can probably be a very good painter. Or people who can play pool can probably be a very good painter. Because in order to be a good pool player, you have to see the whole table. You can’t just shoot at one ball every time. You have to see where that ball’s going to go and where the other balls relate to it. You’re always looking at everything as being part of your action.

Your printmaking images are such sharp, clean, black-and-white affairs, whereas in the paintings you dig into the surface of the paint like a kid messing around in the dirt. One medium obviously appeals to you on one level, and the other obviously appeals on another. How do you view the two of them?

I have a specific reason for doing the woodcuts: to aid me in my painting. I would be working on a painting, and I would be maybe almost complete with it. But I really couldn’t see it very well because I’d been so involved in making it. So, I would look at the image and I would make a drawing of it, and then I would put that drawing backwards on a block of wood and I would cut out this thing where it was just black-and-white.

And that meant that I had to simplify the painting. But I’m looking at the same composition. Then I ink the block and I print it. And I see the painting for the first time as another image and I go, “Oh that’s what’s wrong with this damn painting.”

You’ve talked a lot about being dissatisfied with the paintings.

Do you feel the same way about the prints?

Actually, I like the prints – because of the crispness and the reduction. And what you see in the prints is how really conscious I am of the backgrounds, which they call “negative space,” and how they impact what you’re looking at. I think what I did with “The Iliad” and “The Odyssey” actually is pretty good.

There’s a continual tension between figurative and abstract impulses in your work. How do you address that and how do you resolve it?

When I start to paint, I know what the subject matter is, but I don’t know what it’s going to look like. I usually just start on the large canvas. I work until I get to the point where I don’t care for what it is I’m doing. I think it actually looks like shit. So, at that point I make alterations.

Oftentimes after I’ve done this, I’m sorry that I didn’t keep it the way it was originally. I just keep altering it and altering it, until it’s the least unlike the way I want it to be. I keep trying to find the answer. It can take a lot of time, too. It’s not just in one sitting. It can take several months. I don’t see the subject matter at all anymore. At the beginning, I’m interested in the subject matter. And then the more I do it, the more I get bored with it and I can be interested in what the painting looks like. And if I live long enough I’ll be able to do one that I like.