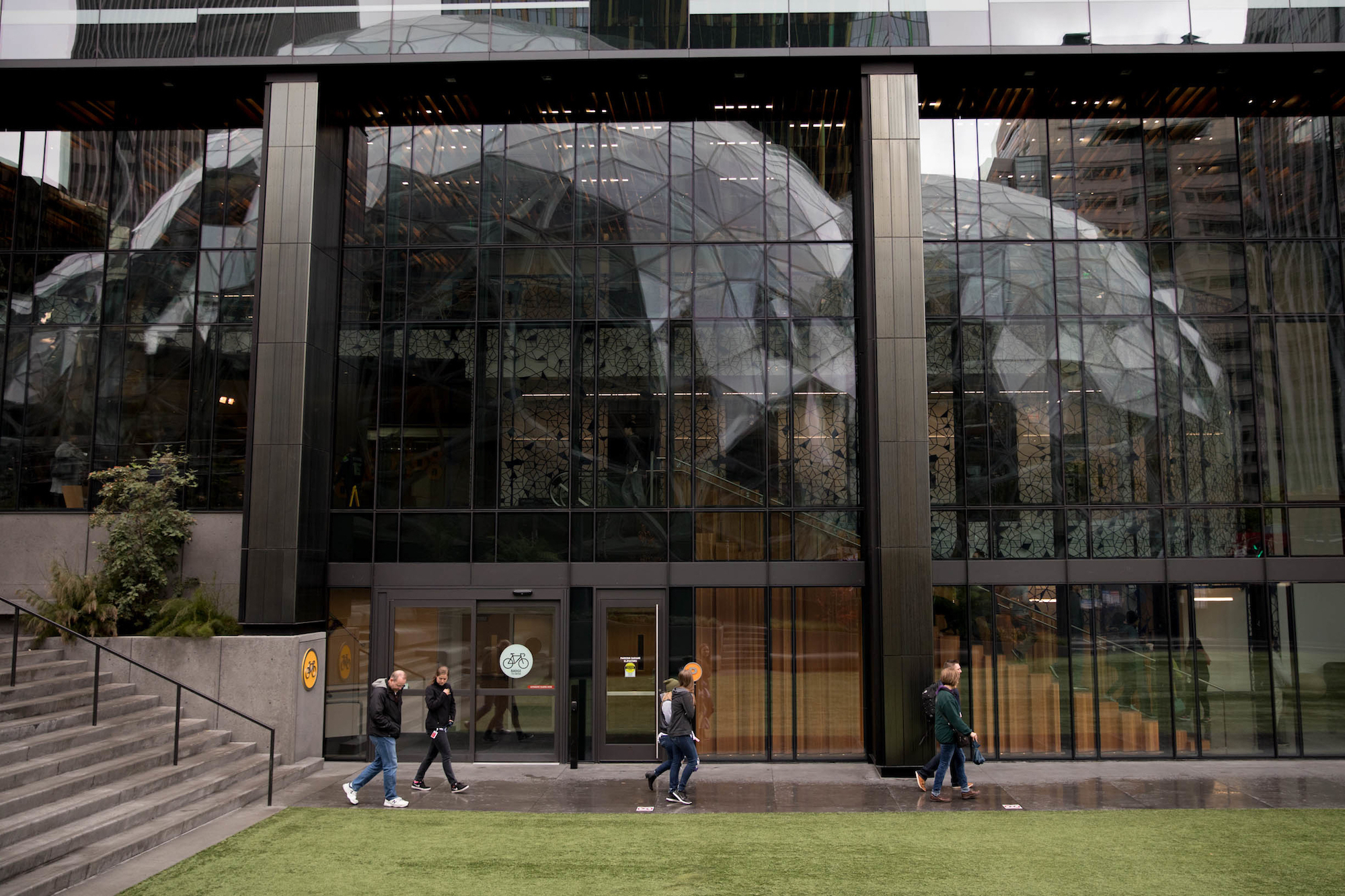 In a shot across the Seattle City Council’s bow, Amazon threatened for the first time Wednesday to pull back on its ferocious growth inside Seattle, which has gone largely unabated for years. In a statement, a company spokesperson tied the threat to a proposed tax on businesses with revenues over $20 million a year, marking a dramatic and direct entree into Seattle politics for the multi-national commerce giant.

The news, first reported by Seattle Times opinion columnist Brier Dudley, coincided with a meeting on the proposed tax inside City Hall with eight of nine elected city council members. The tax has appeared well positioned to win council approval, although the specifics were subject to change.

If Amazon’s threat rattled the slate of elected officials, it was not obvious Wednesday — they largely avoided any public discussion about the company’s statement and none appeared immediately willing to change their vote.

However, in an interview after the meeting Wednesday, Councilmember Kshama Sawant, an ardent supporter of the tax, spoke in blunt terms. "This is a threat, an extortionary warning from Amazon that if you tax us, we will leave," she said. "I see Amazon talking about this in the open as a sign of how successful our tax Amazon campaign has been. $700 billion corporations do not come out of the shadows for nothing. They’re openly flexing their muscles because they feel the threat from the movement in Seattle."

"This is the new 15," she said, referring to the fight to raise Seattle's minimum wage.

The proposed tax, which would raise an estimated $75 million for new housing and homeless services, has been explicitly labeled as an “Amazon tax” by supporters. The tax would be applied on a per employee basis. With Amazon’s approximately 45,000 employees, council members assume the company would be on the hook for $20 to $25 million a year.

“I think Amazon is perfectly capable of paying that, even double or four times that amount,” Sawant said.

The company’s positioning comes amid reports that its CEO, Jeff Bezos — whose net worth is estimated to be $130 billion — is struggling to find somewhere to spend his money, so is investing in outer space projects. And Councilmember Bruce Harrell seemed to acknowledge this idea. “This is sort of pocket change for this human being,” he said.

As City Hall has passed more worker protections, however, pro-business groups have done plenty of hand-wringing over fears that the massive employer may divorce itself from Seattle, invoking the Boeing bust of the 1970s. For some, that fear was already confirmed when Amazon announced it would establish a second headquarters in a different city.

But at the same time, the company’s appetite for growth has not appeared to slow. In March, the Times reported that Amazon had revised upward its forecasts for commercial space usage in Seattle by an additional 2 million square feet, or three skyscrapers. That bumped the total space the company would occupy upon completion of current proposed developments to 14 million total square feet.

Reacting Wednesday, Marilyn Strickland, CEO of the Seattle Metropolitan Chamber of Commerce, framed the news as a warning. "Today’s announcement shows that Seattle cannot take its economic prosperity for granted," she said in a statement. "The City of Seattle has abundant tax resources today because many locally based businesses have chosen to grow here. That’s why we urge the City Council to prioritize those resources—including over $700 million in taxes paid by business each year — before pursuing new revenue, and work with regional partners to develop a coordinated plan that will significantly reduce homelessness."

Wednesday’s threat was specifically targeted toward two projects, Rainier Square — currently a pit in the ground where a mall once stood between Fourth and Fifth avenues and University and Union streets — and Block 18 near 7th and Blanchard.

“I can confirm that pending the outcome of the head tax vote by City Council, Amazon has paused all construction planning on our Block 18 project in downtown Seattle and is evaluating options to sublease all space in our recently leased Rainier Square building,” Amazon Vice President Drew Herdener said in a statement. The two locations were to have housed more than 7,000 new jobs.

The proposed tax lives in an extraordinarily tense place: between businesses opposed to any new increased cost of doing business and a city struggling to wrap its arms around the homeless crisis. With a $0.26 per employee tax, city officials hope to raise $75 million a year. Most of the funding would go toward construction of new housing, with the rest going to support homeless services.

The fight over its passage has grown extraordinarily tense as homelessness in the region continues to rise; nearly 12,000 people were found to be struggling with homelessness in King County in 2017. The debate has dragged on almost nonstop since November, when one proposal barely failed before the Seattle Council after weeks of tense public comment and business opposition.

Already, five council members have signaled their support — enough to pass the measure, but not protect it from a veto.

City Hall officials estimate only 3 percent of businesses would qualify for the tax. But that has not eased business concerns. Strickland said in a recent message to her members, “Let’s be clear — while not every employer will directly pay this tax, it will affect our entire business ecosystem.”

Early Wednesday, underlining the pressures on Seattle City Council, a group of union advocates delivered a letter to Mayor Jenny Durkan in support of the tax. “Seattle is experiencing a homelessness crisis of unprecedented proportions,” reads the letter, signed by more than 100 people. “Record-breaking rents and mortgages combine with incomes that are not keeping up with prices to widen the gulf between haves and have-nots, and there is an urgent need to address this crisis.”

Mayor Durkan has so far avoided coming down for or against the tax, although she has expressed concerns. In a statement Wednesday, Durkan said she would bring together council members, business, labor and advocates to discuss the issue further. “I’m deeply concerned about the impact this decision will have on a large range of jobs – from our building trades, to restaurant workers, to nurses, manufacturing jobs and tech workers,” she said. “At the same time, our City must urgently address our homelessness and affordability crisis and lift up those who have been left behind. I fundamentally believe we can do both by working together.”