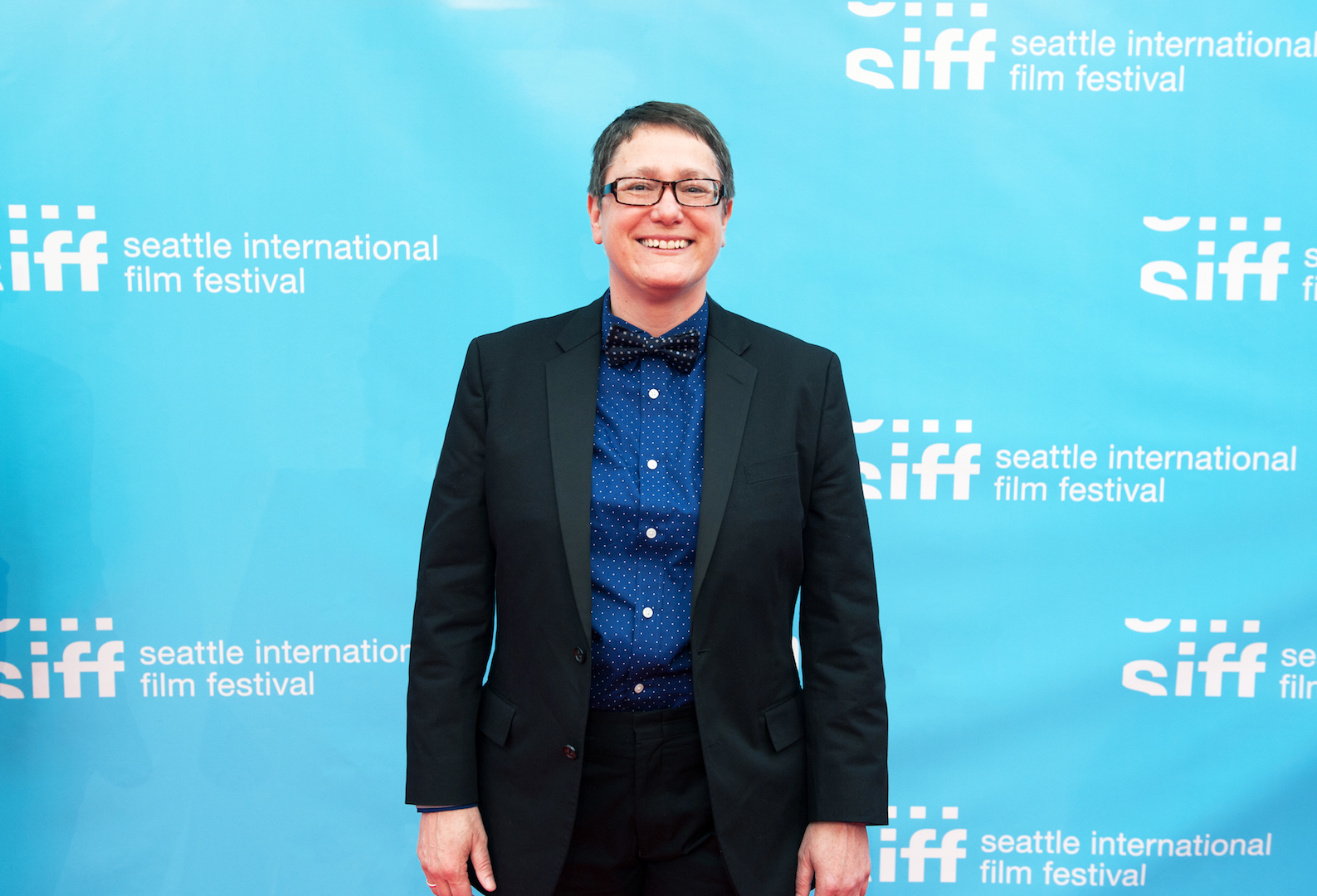 Beth Barrett is the artistic director of SIFF. (Photo courtesy of SIFF)

The venues have been finalized, the parties have been planned, and the opening-night film has been confirmed: a screen adaptation of Penelope Fitzgerald’s quiet, wily 1978 novel, The Bookshop, by Spanish director Isabel Coixet (Learning to Drive), starring Emily Mortimer and Patricia Clarkson.

The 2018 edition of the Seattle International Film Festival kicks off tonight, with a new artistic director, Beth Barrett, at the helm. She was SIFF’s interim artistic director last year, after working ten years as its director of programming. Originally from the Midwest (“I know how to make a good casserole,” she says with a big laugh), Barrett brings an eclectic background to her love of film.

In an interview at SIFF Center last month, she talked about how she came to Seattle and what her plans are for the festival as it marks its 44th year.

What are some of your touchstone films? The ones you go back to again and again?

I could watch West Side Story at the drop of the hat. Italian epics: Marco Tullio Giordana’s six-hour The Best of Youth. Oh my god, that is such a good movie. It’s like a giant Italian soap opera. I watch all the Monty Python films very often.

So when would you have seen your first film? Do you remember what it was?

I have no idea. The TV was always on. My mom loved TV, and thankfully she loved good TV. So we watched M.A.S.H. and we watched a lot of the sitcoms. But we were also devotees of Soap and Fawlty Towers and Monty Python.

What was the first film that really affected you?

I’d just got my driver’s license, so I was 16. I went and saw The Killing Fields. That was the first one when I really realized the power of sitting alone in the dark and going to an entirely different place and learning something. It was not an entertaining film in any way, shape or form — but it was such an amazing, revelatory feeling that I’ve never quite forgotten it.

Was there a point when you started officially studying film? Or did you go a different route in college?

Well, what’s funny is I’ve only taken one film class ever in my life and I failed the mid-term — badly. I have a Bachelor’s degree in English from the University of Iowa and I have a Master’s degree in Northern Renaissance art history.

What sort of film exposure did you have while you were at the University of Iowa?

It would have been the late 1980s, so there were VHS tapes. My friend had a Beta Max too. That was pretty exciting. There were also a couple of different great theaters in downtown Iowa City that had really good student prices. That was where I saw all of my Peter Greenaway films.

What happened after you earned your Master’s?

I made wedding cakes for a couple of years. Then, when I moved to Seattle in 1993, I worked in food service. I moved to Australia in December of 2001 for eight months and worked with Jenny Neighbour at the Sydney Film Festival. That’s when I figured out what I actually wanted to do with the rest of my life, which was to be exactly what I am now. We would watch films and I would put together all the information and do press kits. I loved connecting people, figuring out what people needed to know about the film in order to get them to go to it. I’d always been a festival-goer. But it wasn’t until Sydney that I realized you could work at a festival.

Is it intimidating or is it an honor to be taking over this huge thing that festival founders Dan Ireland and Darryl Macdonald created in 1976, and that Carl Spence and Deborah Person expanded to a year-round enterprise 30 years later? Those are pretty big boots to fill.

Giant. We wouldn’t exist without those four. It was Dan and Darryl for 30 years, and then Carl and Deborah had a unified vision that we’re all indebted to because they saw where we are now…to have a permanent home. To own the Uptown. And to be in a long-term lease on the Egyptian. To have that single giant screen and those 500 seats on a year-round basis is big.

Speaking of screens, is there any chance that SIFF will bring the Seven Gables and Guild 45th theaters back to life?

There’s a lot of things that we need to do both with the Egyptian and the Uptown. That’s where we’re really concentrating our plans right now.

Terrifying. It was terrifying, realizing that opening night was up to me to book. I was like: “Oh, no! I don’t want that responsibility! I like booking my Scandinavian films. Let me go back to that.”

It sounds like a very demanding, all-consuming job. How does it fit in with your personal life?

My wife, Aubrey Scheffel, is currently in doctoral school for physical therapy at the University of Washington. So we have a very busy household. She’s in school full-time. I’m working full-time. Our cats seem to just take care of themselves, which is good.

Penelope Fitzgerald’s novel The Bookshop concerns a middle-aged widow who, in 1959, opens a bookstore in a small English town that doesn’t see the need for one. What made it appeal to you as 2018’s opening night film?

The relationship between tradition and change which is so prevalent in both then and now; the amazing performances of the lead actresses. At stake is nothing less than the power of story, and the ability of story to change a community, one person at a time. It really resonates for me now, as we are all so worried about how to get information that we trust, or can believe in, that we celebrate people that persist in providing new adventures and information.

What’s the process for selecting the rest of the festival program?

We get about 5,000 submissions a year for about 400 slots. They just send us links and we have to watch them. We do have some volunteers also that go through some of the submissions. But we have seven or eight paid programmers that are responsible for X and Y and Z sections, that can really let their personalities — their programming personalities — shine.

I understand there’s a new virtual reality component to SIFF this year.

We have a storefront in Pacific Place and we’re working with WonderTek Labs to create “The VR Zone.” So many people have a lot of curiosity about VR and 360. You hear it bandied about all the time: How do you get that sort of hands-on experience with it? So we are working to pull together somewhere between six and ten experiential projects, some as big as a room and some as small as just the headsets. It’s a real entree into the kinds of work that’s out there, which is extraordinary.

As you go from festival to festival, do you see any other social phenomena like that emerging?

I think there’s a definitely a focus on social justice and equity. Our goal is to try to be as equitable as possible between female and male directors, because there are some amazing stories from women directors that aren’t getting necessarily a lot of attention. The world is becoming a challenging place to live anywhere, with a world political stage that is really confusing and complex. And that’s all being reflected in film now, especially film from the Middle East and North Africa. Even when they’re comedies, there’s a political undertone. Class inequities and race inequities and social justice — all of it is bubbling up, all the stories — especially the stories from young directors or first-time directors. They are not hiding their stories. They’re right out in front with it.

In a video-on-demand world, why do you think it’s so important to see movies in an actual theater?

People have become separated from each other. It’s the electronic age. We don’t need anybody else. And suddenly we realize actually we might need other people and to still have that experience — that experience of being in a dark room and watching something. It never goes away. You can still be totally alone — but yet you’re not alone. There are few art forms that are affordable enough and give you that feeling. And film is one of them.

What do you tell people who are on the fence about going to SIFF?

I think a lot of people are daunted when they look at SIFF: “Oh, it’s so huge.” It’s like: “No, no, come in. You’re going to be fine. Just buy a ticket, get some popcorn, sit down. There you go. You’ve done it. You’ve gone to SIFF.”