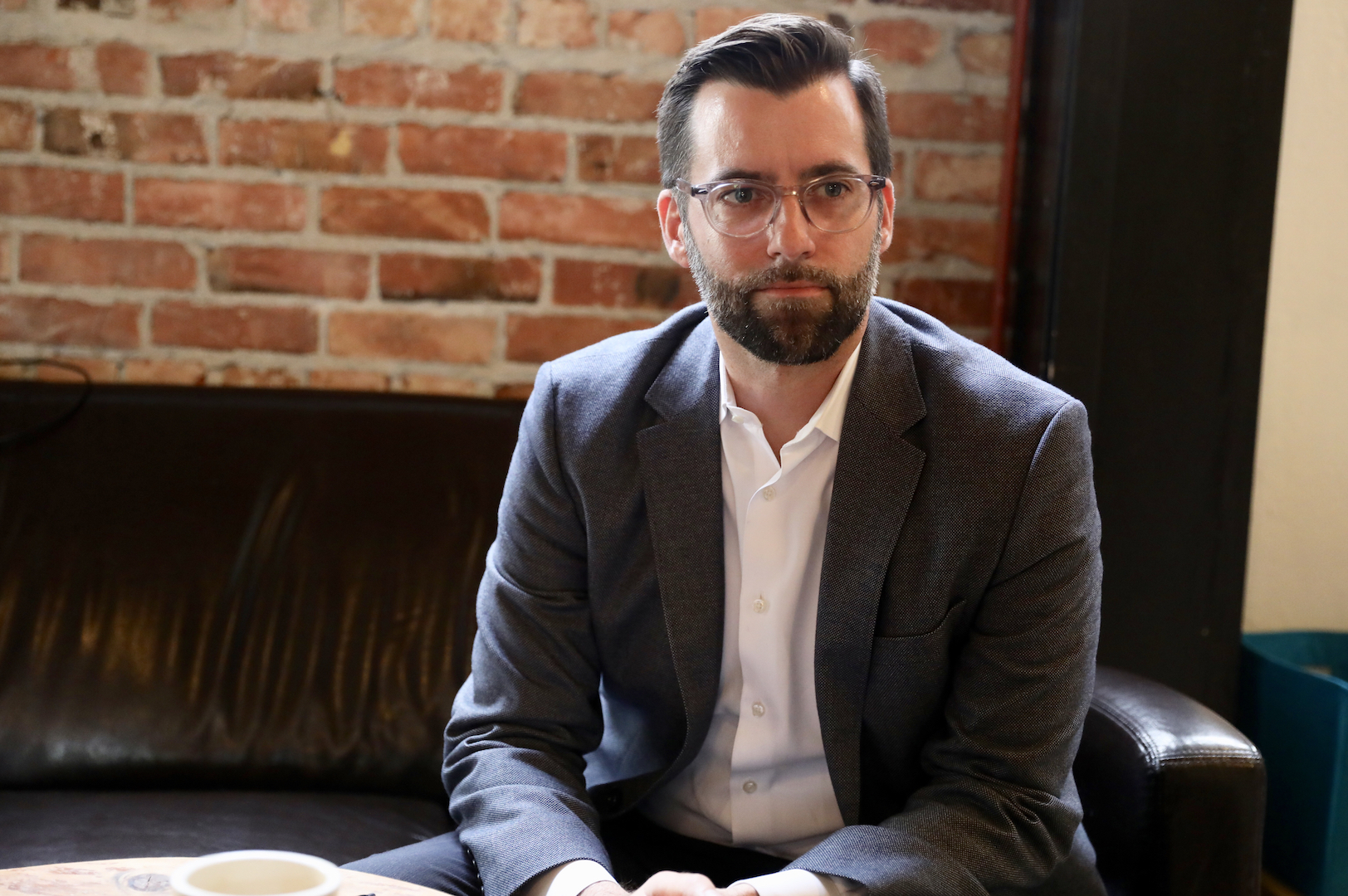 Daron Morris, a public defender and NYU graduate, during an interview at Tougo Coffee in Seattle. May 16, 2018 (Photo by Matt McKnight/Crosscut)

With just two days remaining before the deadline to file for election, it looked like King County Prosecutor Dan Satterberg might, again, run unchallenged for another four-year term.

But on Thursday, attorney Daron Morris, a career public defender and graduate of NYU School of Law, will announce his candidacy at the Chief Seattle Club downtown, contrasting himself as a change-maker in an unequal criminal justice system to what he says is Satterberg’s real but incremental reform.

Morris will be the underdog. He’s unknown and Satterberg has already spent nearly $80,000 on his re-election bid. More than that, Satterberg enjoys broad support from city and county officials, as well as from major players within the criminal justice system.

Satterberg has also built a national reputation as a county prosecutor willing to re-examine sentencing for low-level crimes and pre-arrest diversion.

But Satterberg is maligned within some activist circles, namely over his support for the county’s new Children and Family Justice Center — simply the “Youth Jail” among opponents — as well as for his approach to prostitution, cracking down on sex-buyers. Others still smart from Satterberg’s decision not to bring charges against Seattle Police Officer Ian Birk, who shot and killed Native American woodcarver John T. Williams.

Although Morris is not technically a Peoples Party candidate — the community-driven organization that nearly advanced Nikkita Oliver through the mayoral primaries — he does have support from some of its members. Morris said Oliver’s campaign “and its focus on speaking up for the most vulnerable people in our community” inspired him.

Dae Shik Kim Hawkins, a member of the Peoples Party but speaking as an individual, said it’s frustrating that Satterberg has not had a challenger in so long. He said he appreciates Morris’ pledge to not accept money from law enforcement or corporations.

In an interview Wednesday, Morris, dressed in a suit with no tie, pledged to work for and with the community. “What I need to think about is how to be a voice for changing an institution as a community,” he said. “If I’m elected, on Jan. 1, 2019, the community is going to be in the Prosecutor’s Office, doing trainings, being heard. We’re going to get the community to tell us and train us and we’re going to shift our philosophy.”

He said the community is fissured from the criminal justice system and he will bring necessary change.

Morris and Satterberg come from two different sides of the legal world. Morris is a career public defender; Satterberg spent years as a trial lawyer in the county’s Criminal Division, prosecuting drug and gang cases.

Satterberg was elected in 2007, succeeding his onetime boss, Norm Maleng. He’s been re-elected twice, in 2010 and 2014, each time without a challenger. "It’s been 11 years since I’ve had one,” he said. “But it’s an opportunity for us to talk about a lot of the great things we’ve done in this office.” Satterberg has not yet spoken with Morris.

But despite his prosecutorial background, Satterberg began making a name for himself as a reformer early in his tenure as prosecuting attorney. He quickly started reviewing life sentences and recommending clemency for some detained people, among them the current head of the Seattle King County NAACP Gerald Hankerson.

Perhaps most notably, he partnered with public defender Lisa Daugaard to establish the Law Enforcement Assisted Diversion (LEAD) program. Where post-arrest courtroom diversion was already being offered, LEAD partnered with police to offer low-level offenders — often crack-cocaine users — case management before arrest. Since its implementation, the program has spread across the country, and as a result, both Daugaard and Satterberg were featured in a Frontline documentary on opioid abuse.

Morris appreciates some of what Satterberg has done as prosecuting attorney, especially LEAD. But he sees the progress as too incremental. “We’re at the point nationally and locally where we need to turn the board around in fundamental ways,” he said.

Rather than the 112-bed new youth jail, Morris argues for a diffuse network of offices spread across King County. He believes that some youth need to be detained, but that the number is small — smaller even than the 40 per day average in the county’s current facility.

He also cited reports in The Stranger and The Intercept that Satterberg’s office accepted money from Demand Abolition, which advocates for cracking down on sex-buyers. Although Morris said he believes buying sex is “spiritually corrupt,” he thinks cracking down will not have the desired effect. “A lot of women are saying this approach isn’t making me safe,” he said. “You’re driving me underground and you’re taking away safe ways to make money.”

More broadly, Morris said he wants to decrease incentives for prosecutors to use what he calls “plea coercion” — threatening stiffer sentences unless a defendant accepts a plea offer.

He said he would prioritize prosecuting violent crime over other crimes.

For his part, Satterberg defended the pace of change in his office. “There’s nothing wrong with incremental progress. That’s how you sustain progress,” he said.

He rejected that the Demand Abolition has any effect on prosecutions and stood by the approach to prosecute sex-buyers. He also said he agrees there should be more points of contact across the county, but not that the new detention facility is flawed.

On plea bargaining, Satterberg said his office is in line with national averages.

Daugaard has worked with Morris as well as Satterberg, as co-deputy director of the Public Defender Association. “Daron is an excellent lawyer and was a strong supervisor in public defense, and I agree with him about some ways our system needs to change,” she said.

But she will support Satterberg. “Dan Satterberg is one of the most innovative and courageous reform prosecutors in the country. ... When people come up from within an institution and are willing to lead a profound change to that institution, they can be a lot more effective than an outsider who doesn’t have the respect or know the culture of the thing they are trying to change.”

Morris disagrees being an outsider is a bad thing. “If things are moving in a good direction, that is ultimately going to get us to where we need to be and it’s happening by an insider, that’s incredibly valuable,” he said. “I don’t think that’s what’s happening.”

For Morris to mount a challenge to the well-positioned Satterberg, he will have to drum up significant support from the community he’s pledging to represent. But unlike Oliver for mayor, Morris is not a member of the marginalized communities he hopes to bring into the fold: He’s white, straight and cisgendered.

He acknowledges this, but offers: “What I also do hear is that your privilege counts a lot. Don’t waste it. Don’t let injustice go by when you have the power as a white cisgender man to act.”