12 things to do in Seattle 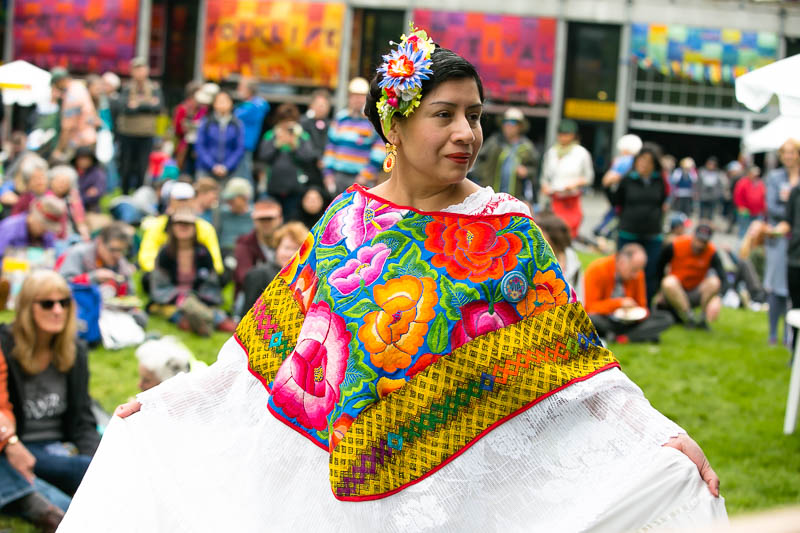 It’s pretty amazing that the Northwest Folklife Festival — with some 5,000 performers presenting music, dance, film and storytelling over four days — is still free. The cultural theme for this 47th year is “Echoes of Aztlán and Beyond: Mexican American and Chicana/o Roots in the Northwest.” So expect to open your ears to a wide variety of Latin music, including: Latin jazz from Dina Blade; traditional folk music by Los Flacos; Argentinian “vocal tangos” from Tango Cowboys; Seattle’s Terror/Cactus, which combines Cumbia rhythms with retro psychedelic soundscapes; and Washington’s best high school mariachi band, Mariachi Huenachi (from Wenatchee, por supuesto!). —B.D.

If you go: Northwest Folklife Festival, May 25-28 at Seattle Center (Free, but this time they are humbly suggesting donations to keep the fest alive: $10 per person or $20 per family)

Bushwick Book Club: Original music based on The Handmaid’s Tale

In his extraordinary feature-film debut, director Jeremiah Zagar finds a spellbinding visual counterpart to the chanting prose of Justin Torres’ acclaimed novel about a trio of brothers who make up a hyper-active tribe of three. Their loving but erratic Puerto Rican dad (Raúl Castillo from HBO’s Looking) and their exasperated, put-upon mom (Sheila Vand) have a vital but explosive physical connection, and sensitive 10-year-old Jonah is beginning to realize how far he’s out of step with their world. Brilliant animated sequences take you deep into the troubled heart of this boy and his family. —M.U.

Ian McEwan’s 2007 novel, about two newlywed virgins hitting a wall of sexual fear and clumsiness on their wedding night, is now a film. While the movie, scripted by McEwan, doesn’t have the compact perfection of the book, it’s gorgeously shot and powered by deeply affecting performances by Saoirse Ronan (Brooklyn, Lady Bird) and newcomer Billy Howle. Bonus: Emily Watson (Breaking the Waves) and Samuel West (Howards End) deliver wicked cameos as the bride’s parents from hell. —M.U.

How do two sensitive parents handle a four-year-old boy who’s running into problems at pre-school for exhibiting “gender-expansive” behavior? This small-scale, deftly made film, featuring stellar work from Claire Danes (Homeland) and Jim Parsons (The Big Bang Theory), starts with a light touch, then digs deeper and deeper as it lays open marital tensions and mixed social messages. Based on a play by Daniel Pearle, Jake hits some Albee-intense notes — and director Silas Howard (Transparent) knows exactly what to do with them. —M.U.

Let the Sunshine In

French director Claire Denis (Beau Travail) has a miraculous, mercurial canvas to work with in the form of actress Juliette Binoche in this talk-driven, serio-comic masterpiece about a newly single, middle-aged artist (Binoche) who’s clearly grasping at straws when it comes to maintaining a new relationship. Not that the available males who come her way have much to offer. All the film’s characters are preposterously tangled up in their own inconsistencies and vulnerabilities. And the closing-credits sequence — unlike any you’ve ever seen — finds Binoche consulting a soothsayer (Gerard Depardieu) whose convoluted divinations are hilariously unhelpful. —M.U.

Chloë Grace Moretz (Carrie, The Fifth Wave) is the watchful, wary title character in this new film by Desiree Akhavan (Appropriate Behavior) about 1990s teens being sent to God’s Promise, a Christian gay-conversion camp. Isolated from her friends and her music (“I’m guessing the Breeders aren’t singing in praise of the Lord”), Cameron keeps a low-profile while connecting with fellow malcontents who don’t buy into the notion that they’re sinners or sick. Jennifer Ehle and John Gallagher Jr. are terrific as determined camp counselors who fall out of their depth when they send one of their charges over the edge. Winner of the U.S. dramatic grand jury prize at this year’s Sundance Film Festival. —M.U.

Japanese filmmaker Hirokazu Koreeda, whose After the Storm was a quirky SIFF highlight last year, puts a perverse spin on the whodunit genre with his latest movie. Call it a “whydunit.” The killer has been caught and amiably cooperates with endless interrogations. But he’s maddeningly elusive about why he did what he did. Embracing a spirit of absurdist fatalism (“People’s lives get decided for them regardless of what they want”), Murder makes delicious nonsense of motive, crime and revelation. —M.U.

Aaron Brady: The Color of Breathing

This small show tucked away in the back room of Gallery 110 consists of just five abstract works in graphite, ink, watercolor and acrylic on paper. But they make a big impact, and have an unusual story behind them. They were inspired by the anxiety Brady and his wife felt as they watched their prematurely born son (3 pounds 12 ounces at birth) struggle to breathe in a neonatal intensive care unit lit in “unnatural saturated ultraviolet blue.” Brady’s large diptychs consist of volatile cloudlike forms in various hues, ranging from variations on violet and blue in “The Color of Breathing” to a sickly orange-pink precipitating into blood-streak red surrounded by black in “The Color of Choking.” They’re beautiful, roiling and unsettling. —M.U.

Viola Frey: The Future of Yesterday

Pastels are an unusual medium for monumental work. But that’s exactly what artist Viola Frey used them for in this impressive posthumous show at James Harris Gallery. Frey (1933-2014) is known best as a ceramic artist, and four of her faux-naïf ceramic sculptures are on display here. But it’s her huge, hectic pastel drawings — bristling with gender tensions and conflicting moods — that are the knockouts. In “Western Civilization Diptych #1,” the central background figure is a bare-breasted woman being either molested or comforted by a male-female couple on either side of her, while in the foreground two dominating nudes — one male, one female — stare at each other a meditative stand-off. “The Discussion I” depicts another colloquy between the sexes, surrounded by all sorts of visual bric-a-brac. Frey delights in absurd color schemes and deliberate inconsistencies of scale. Imagine Chagall embracing a messily antic feminist sensibility, and you’ll have some idea of what she’s up to. —M.U.

If you go: The Future of Yesterday, James Harris Gallery, through June 23, (Free)

One year after Charleena Lyles’ death during an encounter with Seattle Police, Town Hall and UW’s Department of Global Health bring together people from far and wide to discuss the past, present and, most importantly, future of policing. Sure to be enlightening and personal, the panel will include members of Lyles’ family, ACLU Deputy Director Michele Storms, Black Lives Matter activist Jorge Torres, Seattle Public Schools teacher Jesse Hagopian and author/activist/former SPD Chief Norm Stamper. Also joining the panel will be Brooklyn College Professor of Sociology Alex S. Vitale and University of New Mexico Associate Professor of American Studies David Correia, whose recent books, The End of Policing and The Police: A Field Guide respectively, give civilians a framework for change. —N.C.

Gem-nuts, crystal-hounds, mineral-chasers, pseudoscience devotees: rejoice for the return of the annual Seattle Mineral Market. Over 50 vendors come to the Lake City Community Center this Memorial Day Weekend, with collections of gems, fossils, jewelry and more. Whether you believe in crystals for their healing properties, or just like having pretty things around, there will be thousands of specimens to learn about, see and buy — from locally unearthed fossils to field collected Cascade quartz crystals to Ethiopian opals. Street parking is free and easy and there will also be free minerals for children. —N.C.