A Cuban ballet star hangs up his dance shoes 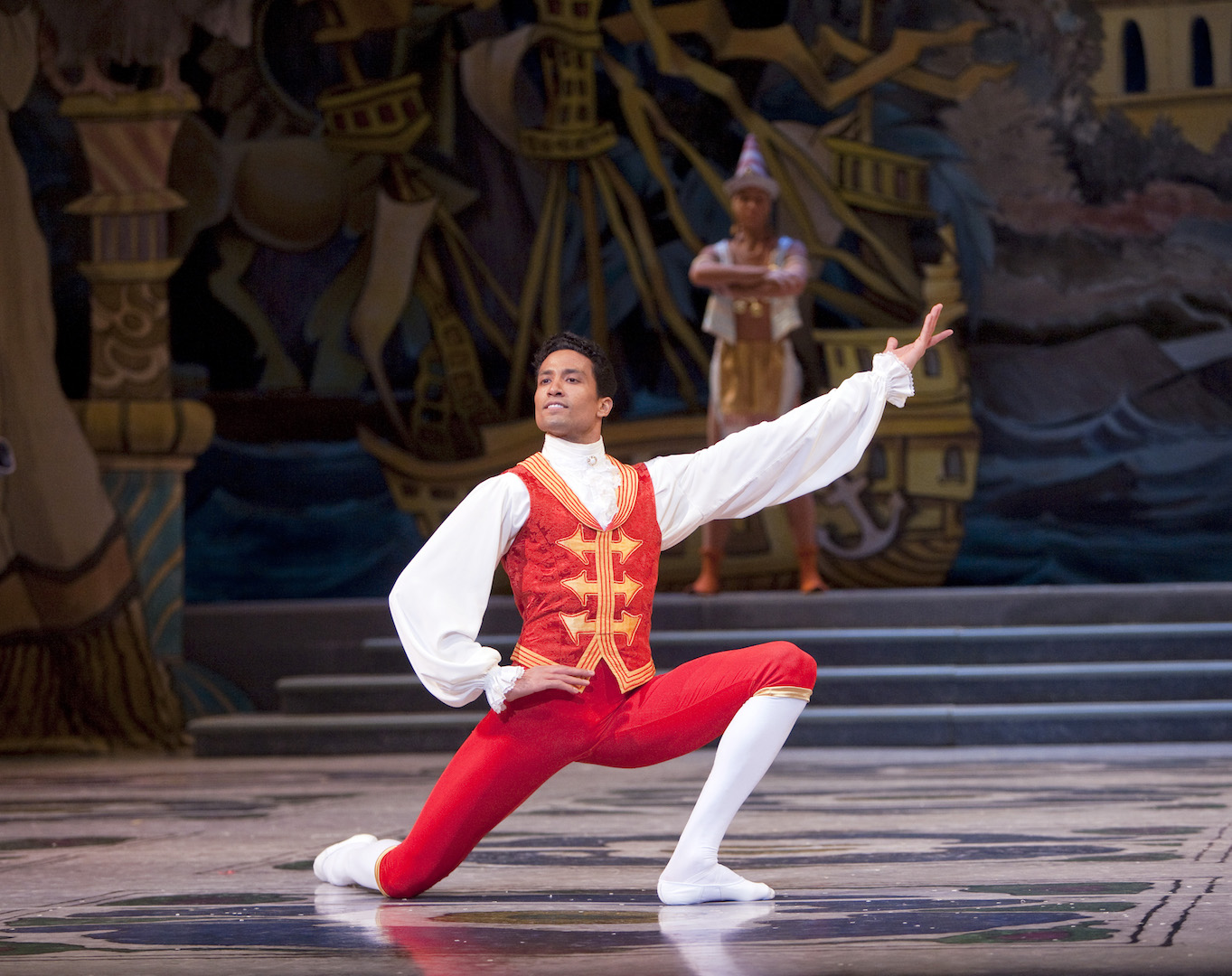 Karel Cruz’s path from his native Cuba to Seattle had many of the twists and complications that we expect to hear about an immigrant journey. The fact that it was all in service of ballet makes the process even more unique.

For many years after the Revolution, ballet in Cuba was promoted to the general population as part of popular culture — the art form is much better known in the country than it is here in the United States. Over the years, ballet has developed a very specific and virtuosic style, as well as a large and enthusiastic fan base. To be a ballet student in Cuba is as aspirational as training to be an engineer or a lawyer here, and to actually be a dancer is a highly sought-after position.

As an art form, ballet was influenced by countries throughout the world except for the U.S. — the years-long embargo on Cuba meant that American dance history from the last half of the 20th century was pretty much a mystery to Cuban dancers and ballet audiences.

As Cruz made his way from Cuba, through Venezuela and then to the U.S., he went through an intense dance education as well as the more familiar cultural disruption and assimilation. The result of that transformation is a dancer who has combined the gravitas of his classical heritage with the wild range of works he’s performed during 16 years at Pacific Northwest Ballet. His career is a capsule example of ballet history, uniting a variety of styles and approaches to the art form. His final performance in Seattle with PNB is June 10.

I know your ballet training in Cuba was very specific, and in some ways kind of old-school — as you left there, and made your way gradually to the United States, how was that different for you in terms of the art form?

It was really hard to stay concentrated because everything was happening around me. (After I finished at the ballet school), I joined the company in Cuba and two years later they called me into the office and said: “You’re too tall for the corps (the ensemble),” and that was it. They basically told me this is the end for you here. It was the biggest challenge in my career up to then and I didn’t know what to do with it. I felt that I had no place to go.

Luckily my aunt was in Venezuela and she helped me find a contract with a small ballet company there (Ballet Classique). I didn’t know then, but you look back at those moments, and you realize why things happened, that everything happens for a reason.

I was there for a year, but then I had to leave — the company didn’t have enough support from the government. So, I went to dance with Vincente Nebrada’s company, the National Ballet of Caracas. I was ready to do the big roles, like Romeo and Juliet, Firebird, Swan Lake  — all the stuff they were doing, but I still had to learn his style. It took me awhile to get it but in the end, it helped me so much with my technique. I was there for a year and a half, and then the next big challenge was coming to the U.S.

I’d never been in the U.S. before, but I was touring with (Nebrada’s) company. We’re here in the U.S., in Baltimore, and we have a few days off, so my friends and I thought we would go to Philadelphia to look at the company there (Pennsylvania Ballet), and see if they need any dancers. And in the elevator, I ran into a friend of mine who was working for the Rock School, which was the school for the Pennsylvania Ballet. And they said, “If you go back to Venezuela and get your student visa…we can help you find a job.”

The Rock School was a challenge for me — after three months I thought I would have to go back to Venezuela. I didn’t speak English at all, the weather was crazy – it was the first time I had ever seen snow and it was the first time I was dancing Balanchine style. But my friends convinced me to stay, and after a year I auditioned here for Kent and Francia (Kent Stowell and Francia Russell, former directors of Pacific Northwest Ballet) and came to Seattle.

It’s been a pleasure to watch you perform here. The first time I noticed you was in (Twyla Tharp’s) Waterbaby Bagatelles and I remember thinking you were really tall and really skinny. I knew something about where you came from and I was impressed you were chewing up the Tharp with enthusiasm — did you have much knowledge of her work beforehand?

Zero — nothing until I got to Seattle.

That must have been…

You’ve told an anecdote about when you were learning to turn in Cuba, standing on a piece of wood to cut down on the friction. And you have lovely turns, especially considering how tall you are. What else from your early training do you still think about?

I was lucky to have the turns — the coordination and a good feeling for the technique. Back in school, I remember the competition we had at that time. When I was in the last years of training in Havana the competition was really fierce. In the school, we had performances often and after class, I remember we had a cassette tape that was loaded with male variations. All you had to do was push “play” and it would go for a half hour. The studio was insane — everybody was practicing the turns and jumps for all these variations at the same time. And that helped with technique overall, the training in Cuba is very intense for male dancers.

It seems like a very specific style and approach and results in some astonishing performers. I’m remembering the Cuban national company when they toured their production of Giselle to Seattle. Everyone on stage was so committed to that performance. That’s the production you grew up with — I’m wondering what it was like to do the reconstruction here.

There’s something inside me, something spiritual — every time I hear that music I go back to that time in Cuba when I was in the corps and just thinking, “Someday I’ll do that part.” The ballet is so intense, the feeling is so intense. It’s not something you ask for (being cast as Albrecht in “Giselle”), it just happens. And then, here I am (in 2011), so far from Cuba, and it happens for me.

What are some roles that really surprised you when you were cast?

A lot of the Balanchine work. I didn’t think I was going to enjoy it, I didn’t think it was for me. I didn’t really see myself in it, and it took a while to accept that, to open up to it. It surprised me when I did Friar Lawrence in (Jean-Christophe Maillot’s) Romeo et Juliette, and Balanchine’s Agon. I did the pas de trois and the pas de deux — they were both big challenges. (“Agon,” danced to a score by Igor Stravinsky, is a premier example of George Balanchine’s stripped-down neo-classical aesthetic) The style, the steps, the musicality, the concentration in the partnering, specifically with Balanchine. With modern pieces, I feel a little more confident, I recognize a bit from my training in Cuba. But the big challenge for me was the Balanchine work.

That’s interesting because it looks very natural when you’re performing it, so you’re either a really great actor, or you’ve actually absorbed what you need to know.

My goal is to bring an honest and smooth style to the stage. I don’t want to force or fake anything. If I wasn’t enjoying a role particularly, how can I make it better? A lot of parts I didn’t think I was going to enjoy, but I did — I found something in them. Sometimes it’s the connection with my partner. I felt that with Carla (Körbes, former principal dancer with PNB) — I danced with her so many times, and it makes me wish I could dance with her again.

Tell me about dancing in your final performances this weekend (Appassionata, the duet from After the Rain, the pas de deux from Don Quixote with his wife, PNB principal Lindsi Dec and the finale of Balanchine’s Diamonds).

I really, really enjoy these works. I feel good on stage, especially the second movement of Appassionata when you can bring everything together: the music, your partner, the technique. It’s the best feeling in the world. Rain is always special for me. I can’t put into words — it gives you a different feeling on stage. I can’t get enough of it.

Is there a question that nobody asks you that you want to answer?

Everyone should know how grateful I am — to my wife and my family. My mom came to the U.S. for the first time in 2013; she hadn’t seen me dance since I left Cuba. We never thought this was going to happen — when she walked into the theater to see me do (the lead in) Swan Lake it was mind-blowing. I get recognized this year (after announcing he would retire at the end of the season). This is something I didn’t see coming at all — suddenly I open my eyes, and when I go to take a bow … it’s a big, big thing for a dancer — that connection to the audience. I can’t say enough big things about the audience in Seattle.

Karel Cruz will dance in PNB's final rep Love & Ballet on June 9 and he will be celebrated in the company's Season Encore performance on June 10.

Sandra Kurtz teaches and writes about dance in Seattle and elsewhere.