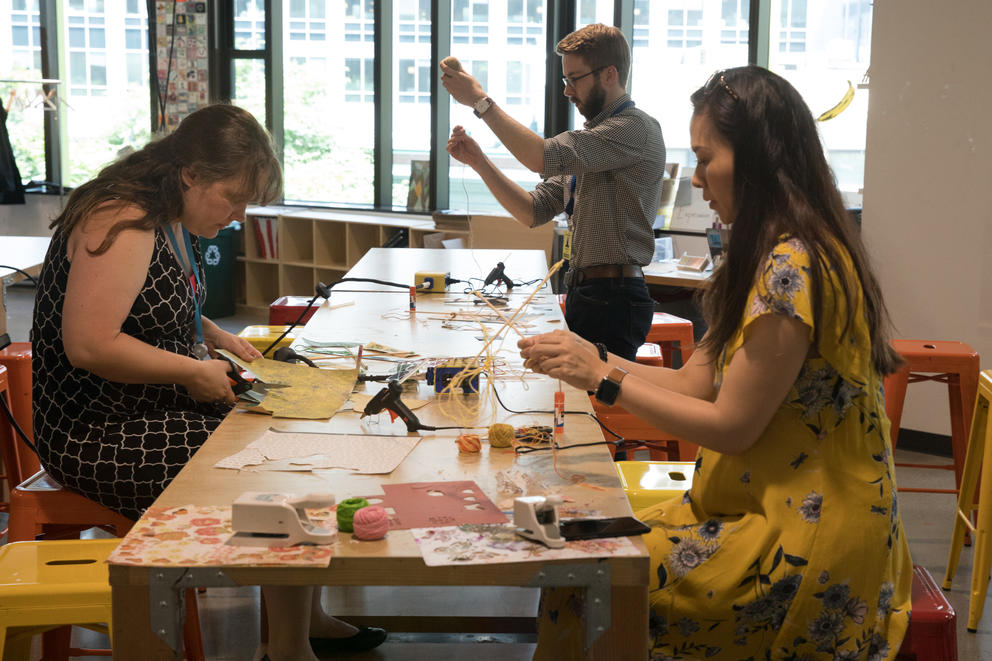 Employees create mobiles and other art within the Amazon Expressions lab at Amazon Headquarters in Seattle, June 18, 2018. (Photo by Matt M. McKnight/Crosscut)

It will come as no surprise that there is some tech-fueled tension in Seattle these days. As employees at Amazon, Facebook and other key technology companies benefit from the industry’s incredible development and growth, longtime residents are experiencing its effect on affordability, congestion and even culture.

Now, many of these companies are increasingly adding an employee benefit that some experts say could further exacerbate this relationship: extracurricular activities.

From coffee groups and chess clubs to orchestra and art classes, over the last few years these companies have ramped up employee-only clubs for virtually every imaginable activity. But by offering these convenient in-house socialization opportunities, could the companies be isolating their workers from the broader Seattle community?

For any real lasting community, you have to have some willingness to sacrifice yourself for the wellbeing of others. This requires caring about — and a connectedness to — your community.”
— Nicholas Christenfeld

“I think the more you encourage people to socialize amongst themselves, the more isolated they’ll be,” said Seattle activist and founder of the meeting scheduling startup MeetingPlanner.io Jeff Reifman. “The more isolated they are from other Seattleites, the less they’ll understand the needs of other Seattleites and the impact their presence has.”

Marieka Klawitter, a public policy professor at the University of Washington, says that these groups seem to be simply yet another addition to workplace benefits in an industry where companies are constantly competing to both attract talented employees and keep them.

“They’re very intensively recruiting people, and often those people tend to be younger and they might be more willing to participate in on-site activities,” she said.

But these groups could also potentially cause something of a disconnect between employees and the broader Seattle community, said Nicholas Christenfeld, a psychology professor at the University of California, San Diego. 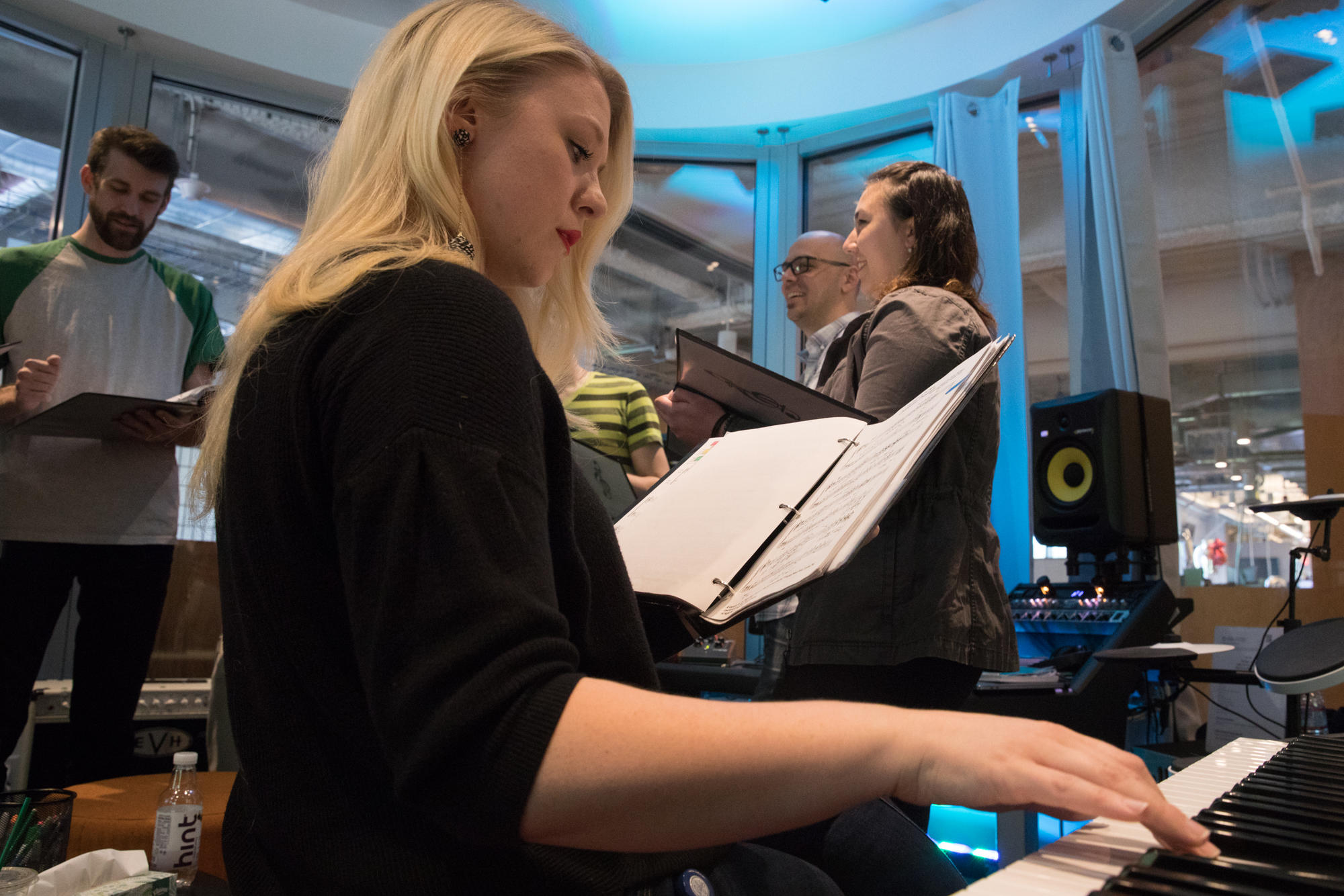 People have traditionally been connected to a broad “community web” by way of their many groups, sports, religious groups, et cetera, he explained. “Gradually you can erode that — if you have your garden club and your movie theatre and your bowling alley and your place of worship all at work. Basically you’ve made this web of connectedness into now a monofilament,” said Christenfeld. “There’s just this one community.”

This could impact the surrounding Seattle area — when that web of associations disintegrates, so too can an individual’s interest and connectedness to the broader community. “For any real lasting community, you have to have some willingness to sacrifice yourself for the wellbeing of others,” he said. “This requires caring about — and a connectedness to — your community.”

In the last five years, Amazon has added a space on its campus specifically for creative activities, such as drawing or knitting nights and art classes. And a few years ago, Facebook launched a Life@ Clubs program, which offers support for the company’s groups, such as funding for supplies and event management.

Lisa Poon, a Life@ program manager, who runs the family and community programs at the company, said these groups are a way to help build an inclusive and close-knit community. “They’re connecting through common interests and passions, so it’s easier to find those connections when you’re talking about similar hobbies, interests, things that you enjoy,” she said.

Facebook Production Engineer Patrick Taylor has not just taken advantage of these groups, he has actually started some of his own, and is a member of its cycling club.

On a recent trip into the Seattle office with this group, Taylor had what he called a “mental lapse.” The 32-year-old turned to check on one of his stalled companions, but forgot to first unclip his shoes from his pedals, and ended up crashing straight into the ground. He said he was pretty embarrassed until his coworker fell about 10 minutes later. After they got to work, Taylor said they were able to joke about what had happened and tell others at the office about their clumsiness.

“If your coworkers become friends or people you can build deeper relationships with, it’s not so much that you come to work anymore,” he said. “It feels like you’re in some ways going home or you’re around friends all the time.”

Taylor has also founded the company’s basketball, photography and boxing and fitness clubs. And although he will occasionally attend these types of groups outside of work, as a busy father of a young son, extracurricular opportunities at his company are simply more convenient.

“I participate a lot more in the Facebook groups just because either I’m on my way to work or I’m already at work, or outside of work, my coworkers maybe live next to me, so it’s just a continuation of, hey, let’s continue this thing,” he said.

Some of these companies’ groups do engage with the broader public. Certain clubs meet at nearby restaurants or coffee shops, and some music ensembles and theatre troops will perform outside the company. But since the groups are meant specifically for employees, real conversations with unaffiliated community members during these outings are likely limited.

Amazon will also occasionally bring in outside experts, such as artists, to hold workshops for employees — once a month the company holds a drawing night, and brings in an instructor and models from the Gage Academy of Art. Lara Hirschfield, senior real estate programs manager at Amazon, said this can prompt employees to seek out other opportunities for these types of classes outside the company.

Allison Lee, 28, started at VR company Oculus’ Seattle office about 6 months ago, and has already started a board game group. In April, they had their first event, which, with over a dozen attendees and more than four hours of gaming, she said was very successful. “It’s just a different feel when you get to play games with people that you see every day for hours on end,” she said. “And also people that you go through the trenches with.”

There’s no doubt that extracurricular activities at technology companies are benefitting their employees. But as Christenfeld points out, they may also be enabling a divide between the company’s employees and the surrounding community.

As he explains it: “If Google has its own orchestra, would people who work for Google still be contributing to the public orchestra?”

The legacy of racism built into Northwest highways and roads

From the Oregon Trail to the Lake Washington Bridge, transportation infrastructure has often driven growth while promoting exclusion.