As King County gets richer, single moms get poorer

Incomes for single mother-led households are flat or falling as other families see gains. 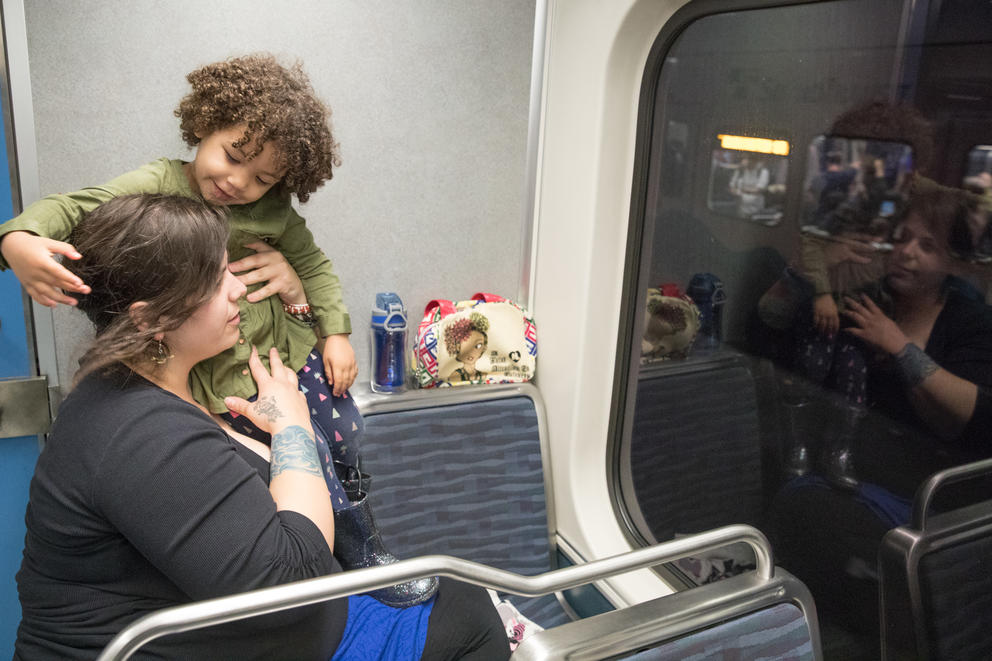 Melissa Pico boards the light rail at the University of Washington Station with her daughter, Eva. May 17, 2018. (Photo: Matt M. McKnight/Crosscut)

Jennifer Phipps thinks a lot about Alice, the title character of the 1970s television show. Like Alice, Phipps has a son she’s raising on her own. The boy on TV, frozen in time, is close in age to hers.

The rest of the fictional single mother’s world seems foreign to Phipps. Linda Lavin’s Alice easily affords an apartment on a waitress’s pay. Her son dips in and out of her work, untethered from grownup oversight or child care.

In the real world, Phipps said, “there isn’t the same freedom.”

Phipps, a research coordinator at the University of Washington, is considering moving in with other single mothers to save on rent. Leaving her boy to pinball on his own is not an option.

King County’s economic boom isn’t lifting single mothers like Phipps. Of all earners, women with children and no partner continue to earn the least. And, as other family types see gains, income for single moms has flatlined since 2009. Between 2015 and 2016, single mothers’ earnings actually appear to have dipped.

There’s no way to figure this out or solve this problem. I'm just kinda stuck here.”
— Melissa Pico

Census Bureau surveys show the problem is worse for King County’s Black and Latina single mothers, who are more than twice as likely to live in poverty than White single mothers.

This comes as King County home values have nearly doubled since 2009. Rents are up more than 70 percent. Child care, car tabs, gasoline, food prices: everything is more expensive. While married couples, childless adults and even single fathers have seen windfalls from a hot economy, the paychecks for single mothers are frozen in time, like Alice’s son.

As a result, for Phipps and others, asking if single mothers can survive in Seattle or broader King County is not hyperbole. Said Phipps: “It’s not sustainable." 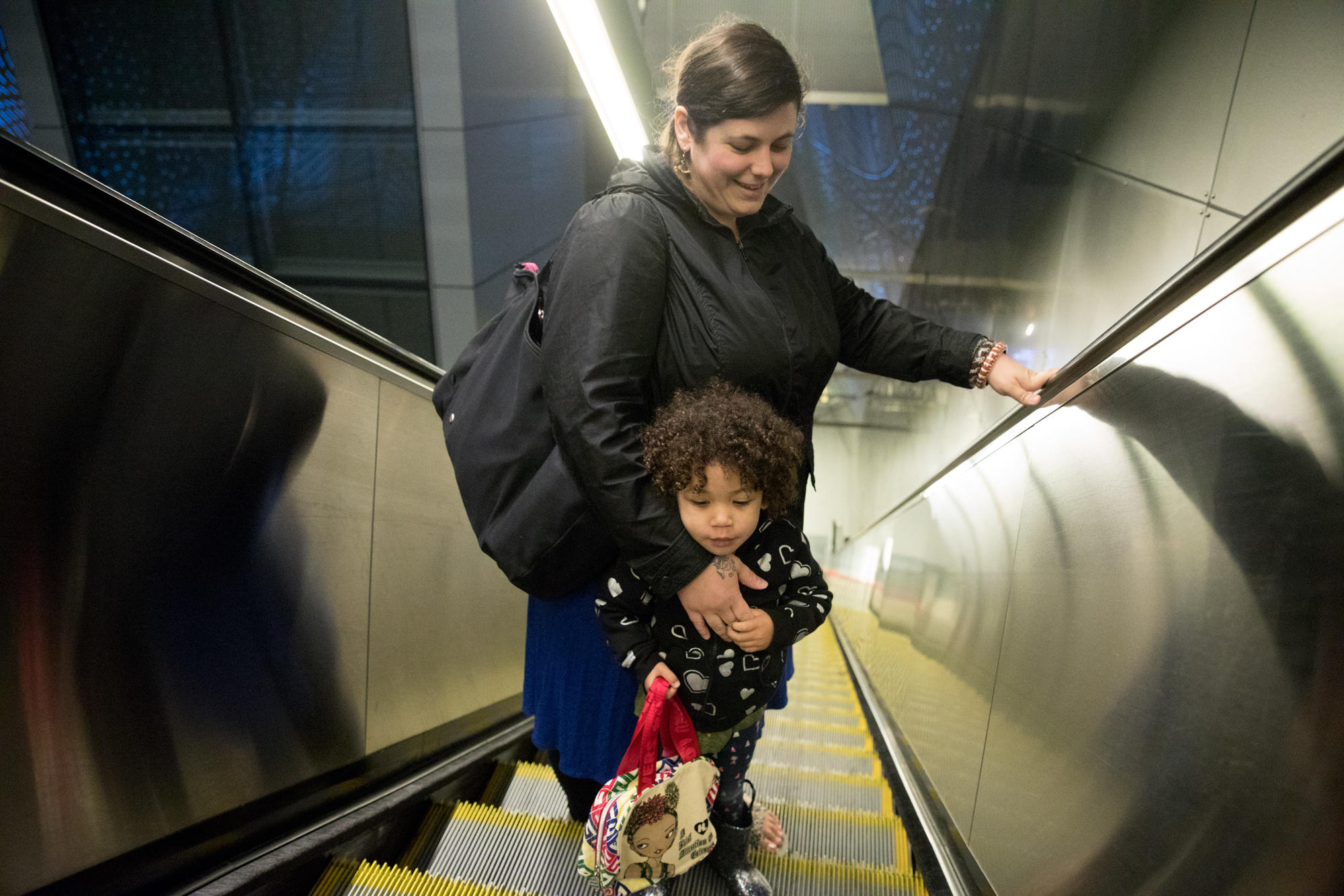 No one at Melissa Pico’s work had ever declined a raise before. But for Pico, she’s concerned even an extra 2 percent could make it harder to get child and health care subsidies. She’s already spending around 75 percent of her pay on rent and daycare for her 2-year-old daughter, Eva, whom she lovingly calls “Bug.”

“When I did the math around that, I was like, ‘Oh, there's no way to win this,’” said Pico, seated on the edge of Cowen Park playground in Seattle’s Ravenna neighborhood as her daughter climbed backwards up a slide. “There’s no way to figure this out or solve this problem. I'm just kinda stuck here.”

She has managed to stay in Seattle by sleeping in the same bed as her daughter in a small University District apartment. Pico has considered leaving the city. But, though Bothell or Renton were once cheaper options, what she could save by moving no longer pencils out after accounting for the commute.

For Phipps, Pico and other single mothers, hearing that their stagnant pay was the norm more than the exception was surprising. They assumed it was just them.

Breaking out incomes by family type is new to Public Health — Seattle & King County. But Director Patty Hayes sees the information as a useful tool in building a healthier community.

“It's our role to help shine the light on stuff so that we can have the conversations on … what I call those ‘You're kidding me moments,’” Hayes said.

For Hayes, the revelation of single mothers’ income was one of those moments.

The statistics were pulled from the U.S. Census Bureau and organized through a public-private partnership with local governments, the United Way and the Seattle Foundation. The resulting information, presented on a slick website, is called Communities Count.

Families led by single mothers have always been the poorest. But the gap between them and other family structures is growing in King County. The microscopic climb in income for single mothers — from around $34,000 in 2009 to $37,000 in 2016 — falls within the margin of error. During the same time period, the gap between single mothers and couples with children grew from about $70,000 to $100,000.

And between 2015 and 2016, pay to single mothers actually went down by about $3,000, erasing any gains made the year before. The margin of error is wide — plus or minus $7,000 – so the apparent decline could be illusionary. But the trend for all others — including single dads — does not dip.

Where the median income of married couples in King County outpaces the national number, for single mothers, it is right in line.

Black and Latina women fare the worst. Public Health’s Communities Count database does not break out single mothers' earnings by race. But data from the Census Bureau’s American Community Survey show a slow decline in King County of White single mothers in poverty, from 24 percent in 2012 to 20 percent in 2016. Latina mothers also saw a decline, although their overall numbers remain much higher: In 2012, 50 percent earned poverty wages; by 2016, that was down to 44 percent.

Black mothers, meanwhile, saw an increase in that same time period, from 40 to 47 percent living in poverty.

“We do know that looking at other data, race does make a difference,” said Dr. Nadine Chan, assistant chief at Public Health. “The experiences of different races are not the same when it comes to job opportunities and being able to get housing.”

Like Phipps and Pico, Briana Bell thought her stagnant pay was unique to her. An HR professional by trade, she moved with her two children from Dallas to Seattle in 2014. Her pay spiked at the time of the move, but it didn’t last. Shortly after her transfer, Bell requested more flexibility from her work to parent her children. Her employer wouldn’t give it.

So she left to find a job that could give her the latitude she needed to care for her teenager and younger daughter.

She took a position at a recruiting firm with a base pay that was $7,000 less but promised a commission. But the recruitments didn’t come, and after a year she was let go.

Bell now works part time as an executive assistant in Shoreline and collects unemployment. She lost her health insurance. Her rent rises every year, up $250 a month from when they moved into their Shoreline apartment three years ago.

“I can barely, barely, barely make it with unemployment,” she said, seated at a plastic table in a Shoreline community center. “We can't do anything but pay for rent and utility and gas and food – a lowered amount of food.”

When asked why single mothers’ pay hasn’t budged, Hayes said she didn’t know. Public Health has conducted qualitative surveys of mothers, but broad conclusions are elusive. Still, there are some guesses.

“We know that women tend to make less than men,” Hayes said. “We know that child care is extremely expensive and hard to find.”

“I can imagine that if somebody is in a married couple's household, there are probably more risks you can take in terms of, ‘Let's see what I can do if I jumped jobs,’” she said. “Because you've got two incomes, you can take more risks and take advantage of this economic boom.

“But when you have a single parent household there's less opportunity for you to take those risks. You don't want to put your income and wellbeing at risk.”

The common thread between Phipps, Pico and Bell is the importance of flexibility in work and the enormous challenges that come when that’s lacking. Every inflexible hour represents a choice: Forfeit that time, along with the pay and possibilities for advancement, or pay for child care. A fluid schedule is so valuable that Bell took a pay cut to find it.

“My boss at my job has probably been the only reason why I'm not homeless at this point,” said Pico, who does not work Fridays.

Even when a single mother can find a job with a fluid schedule, that need for flexibility gets in the way of moving up.

“It's hard to see my income not changing for various reasons and see younger people than me that have less experience than me moving on to better and bigger things,” Pico said. “I feel like part of the reason why I don't have access to those things is I’m not around as much. It's hard to apply for jobs and say, ‘Yeah this is a full-time job but I can only be here four days a week.’”

For all the anxiety that comes with not having enough money, more corrosive is the guilt.

In her first year-and-a-half, Eva bounced between three care centers. At one, Pico heard Eva was parked in front of a television all day.

“There's so much around what you're supposed to do to be a good parent and it's conflicting — support your children, but also do all these things that you don't have time to do if you're working full-time,” Pico said.

“So as a single parent you can't actually do all the things that society tells us what good parents are supposed to do.”

Juneteenth: A day that contains multitudes