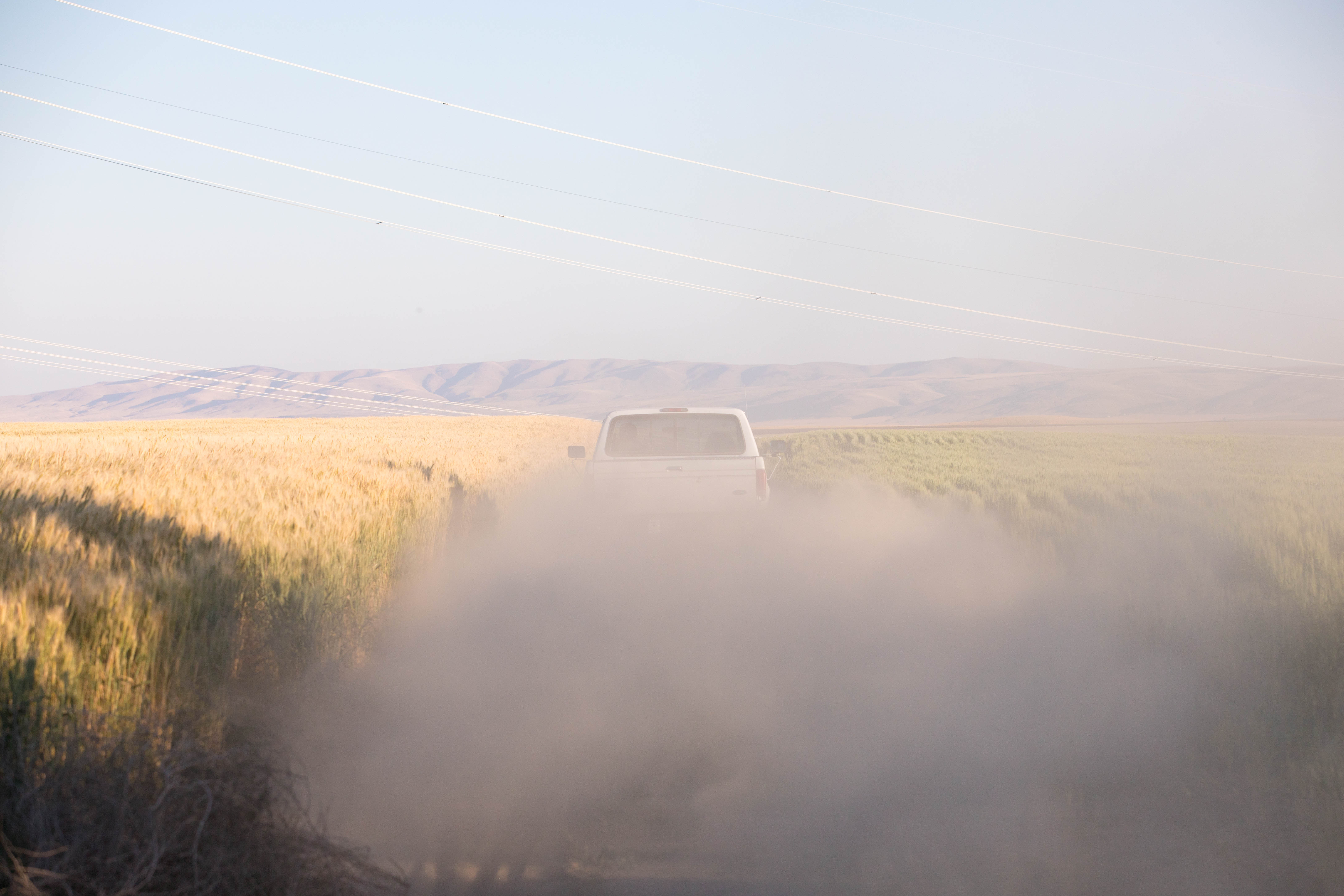 A pickup truck drives along a dirt road in rural Waterville, July 2017. Farmers and ranchers are some of the many small business owners with an all-family staff who have found themselves priced out of traditional insurance. (Matt M. McKnight/Crosscut)

Self-employed. Contract worker. Small business owner. If your situation ticks any of these boxes, you likely fit the profile of a loser under the Affordable Care Act.

Rising premiums and deductibles hit middle-income individuals and families in these categories hard. From the beginning, bureaucrats admitted the Washington Health Benefits Exchange website struggled to handle the unpredictable income of the self-employed.

For our family of two adults, three dogs and 300 goats on a Lincoln County ranch, ticking all three boxes made abandoning the insurance industry and joining a health care sharing ministry less a leap of faith and more of a necessity in November 2014.

Health care sharing ministries are a faith-based model for how a community takes care of its own. Members pay a monthly fee into the ministry, which then pays for larger medical expenses. It’s the original template for insurance.

We pay about $3,700 per year in a sharing ministry membership, in lieu of premiums, and are exempt from the ACA’s insurance mandate. Our out-of-pocket costs for any single incident or illness are limited to $500, and we pay cash for basic checkups. Every provider we deal with has offered cash discounts comparable to or better than those offered to insurance companies.

Accessing health care without an insurance intermediary has been a good experience for us. There are useful lessons to apply as the nation struggles with how to support access to health care at reasonable rates for everyone.

Health care sharing ministries are not well known even to the communities they are meant to serve.

There have always been exemptions in federal health care law for faith-based alternatives to insurance and Social Security. Amish and Mennonite communities are exempt from Social Security taxes and health insurance programs. Their members participate in over 100 small health care cost sharing organizations or informal support networks. All of the ministries are founded on the biblical admonition of Galatians 6:2: “Carry each other's burdens, and in this way you will fulfill the law of Christ.” To qualify for these exemptions, a sect must have a track record since 1950 of providing for the medical needs of its members.

But the ACA also recognizes several larger health care sharing ministries, including several serving evangelical Christians that emerged in the late 1970s. The oldest and largest grew out of a pre-internet version of a GoFundMe appeal. The son of a missionary pastor in Ohio was badly hurt in a car wreck and had no insurance. The pastor made an appeal to his mission mailing list and in 45 days received more than enough to cover the bills. He started the first sharing ministry outside the Amish and Mennonite communities as the Brotherhood Newsletter, later reorganizing as Christian Healthcare Ministries in 1981.

The ministries are not insurance and are not regulated. There is no legal contract binding them to pay bills in the way an insurance company is bound. The ties that bind the ministries are, almost always, Christ and common lifestyle values. Some of the ministries require attestation from local pastor, others rely on honorable self-determination. Members pledge to pay their designated shares each month. Members in need receive support in the form of payments to providers or direct reimbursement for costs, in different ways from each ministry.

Christian Healthcare Ministries (CHM) is the largest of the national health care sharing ministries, supporting over 400,000 individuals in 200,000 households. Two more groups formed in the 1980s, Samaritan Ministries and Christian Care Ministries, which operates under the name Medi-Share. Samaritan currently has over 229,000 members and Medi-Share over 335,000.

Even though Washington is regularly ranked as one of the least religious states, about 36,000 residents belong to one of the three ministries.

According to Dr. Dave Wheldon, a former congressman and president of the Alliance for Healthcare Sharing Ministries since January 2017, participation in sharing ministries nearly tripled after passage of the ACA, largely for the very reasons my husband and I experienced.

Entrepreneurs, ranchers and farmers, pastors and worship leaders, and owners of small businesses running with an all-family staff found themselves priced out of traditional insurance. Some members also joined because of religious objections to legal mandates on insurance coverage. Medi-Share alone increased membership more than fourfold.

Health care sharing ministries had been accepted in the Massachusetts health care reform law used as the template for the ACA. According to Wheldon, the Alliance pressed for similar treatment in the federal law. Massachusetts Sen. Ted Kennedy agreed to exempt members of sharing ministries in existence prior to 1999 from the penalty for being uninsured. However, members are barred from establishing pre-tax Health Savings Accounts for expenses not covered by the ministries.

Another ministry, Liberty HealthShare, launched in 2012 as an expansion of one of the smaller Mennonite plans that had been in place since 1995, making it an ACA-compliant organization. Liberty HealthShare added its first member in August 2013 and currently reports a membership of over 96,000 households and 231,000 individuals.

It was stewardship of cash resources and not Christ that first drew us to the ministries. Our family’s CHM Gold membership for one year is less than half the average premium in Lincoln County. Average annual premiums in Washington vary from a low of $14,796 in Lincoln and a few other small counties to a high of $17,962 in King County. The savings more than covers our responsibility for checkups and minor medical care.

Medical costs after the first $500 per incident are fully reimbursed for gold level members in the CHM program. For us, that meant our out of pocket costs for a recent rotator cuff MRI, repair surgery and rehabilitation was zero. We met our responsibility for the first $500 in costs by negotiating more than $500 worth of discounts. Other ministries strike a similar balance between personal responsibility and sharing burdens.

Like many new members in the explosive post-ACA expansion, we found living our faith and the sense of connection to be an unexpected benefit.

“It’s a community of people who have voluntarily come together to share more than $1.6 billion in health care bills and offer both financial as well as prayer support. People are paying into a system they are connected to, the connection is important,” said Michael Gardener, communications director for Medi-Share.

CHM and Medi-Share collect members’ monthly contributions and reimburse those with medical bills. It feels a bit like paying a monthly insurance premium, without the annual price hike.

Samaritan Ministries and Liberty HealthShare act as facilitators for direct connection between members with needs and contributing members. Samaritan provides names and addresses for paper checks to be sent directly member to member, usually accompanied by personal notes and sealed with prayer.

Liberty uses a digital system to similar effect. Members transfer money into family share accounts and are matched with another family with medical bills. All transactions are transparent to both parties.

“New members tell us how gratifying it is, knowing exactly where their money is going and being able to send messages of encouragement,” said Dale Bellis, CEO of Liberty HealthShare.

Health care sharing ministries serve small numbers but provide insights into the problems of the current sick care system. For the typical American, health insurance is a third party in every health care transaction between patient and provider, whether Medicare, Medicaid or private insurance. Bellis pointed to eliminating third party schemes, whether public or private, as a key to cost control.

Traditional insurance “creates a sense of immunity from the costs for patients. Incentive, motivation and engagement are missing. It’s not me in control of the care of my health,” said Bellis. Members share a sense of accountability to each other when they “know” who is paying the bill. It’s not a faceless bureaucracy. It’s someone just like me.

The old fee-for-service insurance model rewards the doctor for seeing you when you’re sick rather than keeping you healthy. Liberty encourages members to build relationships with doctors who share the financial incentive to be a health care partner through direct primary care practice. It flips the basis for payment. In direct primary care, patients pay a monthly fee like a health club membership, covering 24/7 access to the doctor as well as basic testing. The less you need the doctor, the healthier you stay, the better the arrangement is financially for the doctor.

Leaving the health insurance system to become a self-pay customer dramatically changes conversations with health care providers. Doctors have the freedom to exercise their professional judgment in providing care instead of battling algorithms administered by insurance company staff with less or no medical training. When I sought a diagnosis and treatment for a shoulder injury, my doctor pointed out several places where she was able to skip unnecessary steps. It saved me additional pain, time and money.

Being a part of a sharing ministry also means not paying for treatment or procedures that violate deeply held values. Abortion is the most obvious, but stickier dilemmas are coming surrounding other end-of-life decisions.

Who makes the decisions is the foundational question of the health care debate. Bellis sees decentralization as the future. He founded the National Coalition of Healthcare Sharing Ministries in 2015 to push for additional ministries rather than growing Liberty HealthShare larger. His focus is on returning responsibility to the individual, “finding ways to foster sharing on the local level and banding together like-minded individuals in as many subdivisions as possible.”

The ACA is already interpreted differently from state to state. National consensus will only become more difficult as divergence increases. In my mind, decentralization across state lines, building on the concept of freely associated, like-minded members, may be the healthiest way to serve a nation as diverse as ours.