Inmates at the Northwest Detention Center have gone without food for 3 days — and counting. 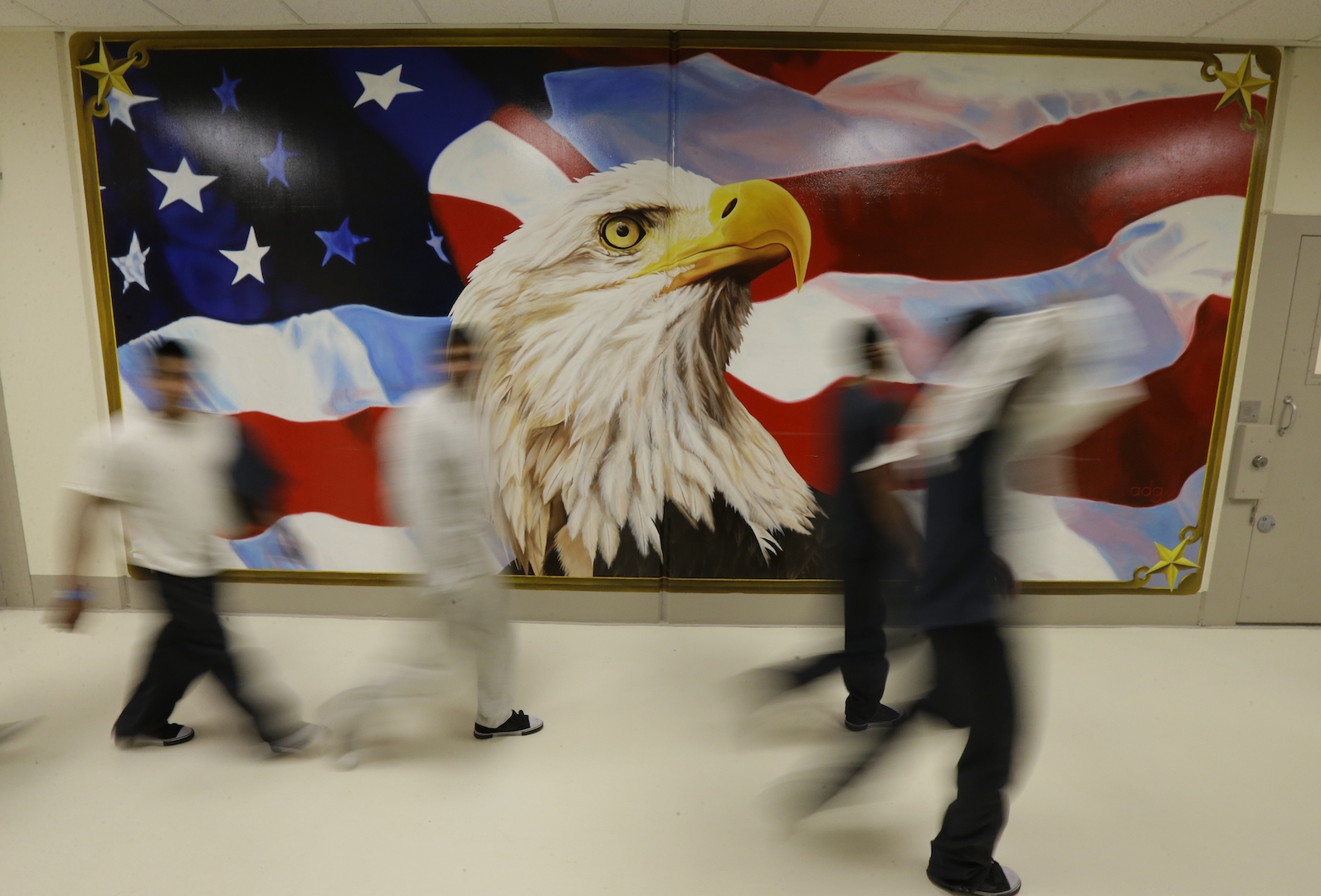 In this photo taken June 21, 2017, detainees walk past a mural in a hallway at the Northwest Detention Center in Tacoma during a media tour. (AP Photo/Ted S. Warren)

As the government scrambles to reunite immigrant parents and children separated at the U.S.-Mexico border, detainees inside the Northwest Detention Center in Tacoma are doing what they can to show solidarity with the parents while protesting the Trump administration’s “zero tolerance” policy: participating in a hunger strike.

Immigrant-rights activist Maru Mora Villalpando of the volunteer community group NWDC Resistance said at least two cells containing approximately 170 people had on Saturday pledged to stop eating. The protest was expected to last three days — at least nine consecutive meals — but is likely to continue. One of the inmates, who asked to remain anonymous for fear of retaliation, told Crosscut that he and others plan to refuse meals indefinitely or “until they listen to us.”

Villalpando said she learned of the hunger strike on Saturday during a protest at the detention center that included two mariachi bands. Detainees had heard about the music-filled demonstration happening right outside of the facility and called Villalpando, who was at the demonstration. She held up the phone so the detainees could listen to mariachi songs. It was then that they announced their plans to participate in a hunger strike.

The detainee said he helped plan the action not only because the administration had separated parents from their children but also because all detainees at the center who have children want to be reunited with their families again, regardless of how the separation occurred or whether the children are in safe hands.

The detainee said they are also protesting poor conditions at the center. In an interview on Monday, he complained of a lack of food and being given dirty underwear to wear.

“They call us illegals, but we still have rights,” read a statement issued by the detainees on Monday. “We all should be given the opportunity to stay. Many of us can’t go back to our countries because we could die.”

The detainee interviewed by Crosscut said he’d rather remain locked up than return home to Mexico where he fears for his life.

Villalpando added: “I think people forget that we have this detention center filled with people who might not be parents, but still they’re detained under horrible conditions. This is not about who has children or not. They’re human beings.”

According to Villalpando, guards at the center have already begun retaliating against those on strike, allegedly warning participants that if they don’t eat “things will be really bad" for them.

Villalpando also said several family members who had attempted to visit the detention center reported being turned away and that officials had told them their loved ones “refused to cooperate.” She also said she had received at least one report of a detainee being sent to solitary confinement.

This isn’t the first time detainees have protested conditions at the privately-run detention facility or accused those operating it of retaliation. Last February, for example, a detainee named Jesus Chavez claimed a guard hit him for participating in a hunger strike. He and one other detainee — Jose Mesino-Garcia — released videos as evidence.

Chavez’s video showed him talking directly into a camera with one eye swollen shut. The Washington state chapter of the American Civil Liberties Union filed a lawsuit on his behalf, naming  U.S. Immigration and Customs Enforcement and GEO Group, the private company that operates the detention center, as defendants.

Crosscut could not immediately reach GEO Group for comment, but the company has previously denied retaliating against inmates, saying it “has a longstanding record providing high quality, culturally responsive services in a safe, secure, and humane environment that meets the needs of the residents in the custody and care of federal immigration authorities.”

Last year, Washington state Attorney General Bob Ferguson sued GEO Group for violating the state's minimum wage law. The company is said to pay detainees $1 per day or, in some instances, with snacks and extra food.

Across the country, approximately 3,000 immigrant children have been separated from their parents under Trump’s “zero-tolerance” policy, which seeks to criminally prosecute anyone who crosses the border without documentation. On June 20, Trump issued an Executive Order meant to end the practice of family separation. Government officials have been given a July 26 deadline to reunite all remaining migrant children separated from their parents.

According to Jorge Barón of the Northwest Immigrant Rights Project, approximately 40 parents separated from their children at the southern border remain detained in Washington state.