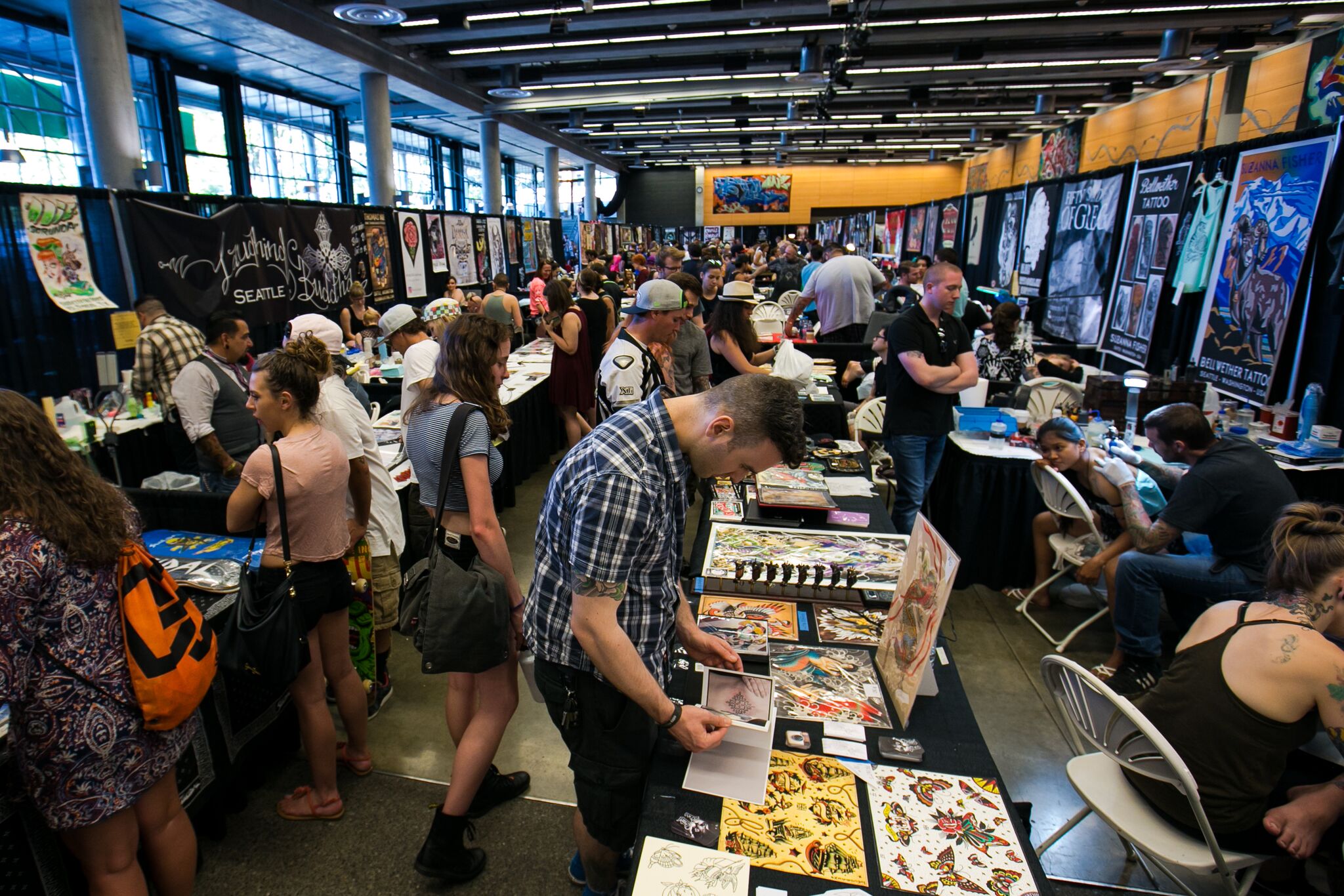 More than 200 tattoo establishments from across the country are taking part in the 17th annual Seattle Tattoo Expo, including such gamely named outfits as Yourflesh (Colorado), The Lobster King (Utah), Imperious Rex (California), Code of Conduct (Chicago) and Seattle’s own Slave to the Needle. You can get a tattoo or show off those you already have in the tattoo contest (see the website to make an appointment or enter the competition). You can also simply watch these ink-on-skin artists at work, amid live music, “sideshow” acts and burlesque performances. —M.U.

Suddenly Seattle summer seems like it’s fading out in a smoky haze. But at Winston Wachter gallery, the air is electric and candy-bright with color — at least for one more week. Curated by local visual artist and arts writer Amanda Manitach, Summer Dreams offers an alternate reality by way of superflat floral arrangements, polar bears bearing space shuttles and imagined interiors with a totally tubular ‘80s vibe. Jennifer Zwick plays with perspective in her photographs by placing stemmy flowers against dynamic patterned backgrounds. Seattle design collective Electric Coffin mix-masters a surreal sampling of international iconography including pagodas, an oversized boom-box and towering neon trophies. Neon Saltwater (aka Abby Dougherty) offers intriguing images in neon pastels, empty rooms that evoke set pieces from Xanadu (the flight of fantasy movie musical). And Portland-based Peter Gronquist puts mirrored mirrors on the wall, in which layered flora appear to repeat ad infinitum. While the artists’ styles are distinct, the overall aesthetic is hyper-hued, pop-positive and slightly psychedelic — just like the best of summers. —B.D.

If you go: Summer Dreams, Winston Wachter gallery through Aug. 22.

Focusing on “stunning visuals, sound design and soundtracks,” this new film festival at Seattle Cinerama boasts an eye- and ear-grabbing lineup, including: Wim Wenders’ Pina (3D), about choreographer Pina Bausch; Jonathan Demme’s unforgettable concert film, Stop Making Sense, which captures The Talking Heads at their 1983 career peak; a pair of David Lynch classics (Blue Velvet and Mulholland Drive); the “black-and-chrome edition” of George Miller’s Mad Max: Fury Road; Paul Thomas Anderson’s gritty, stunning oil-exploitation epic, There Will Be Blood (which netted Daniel Day Lewis an Oscar); the ever-delightful children’s animated film Wall-E; and Mr. Sound-and-Vision himself, David Bowie, in The Man Who Fell to Earth, Nicolas Roeg’s 1976 film about a space alien (Bowie, of course) searching for water on a planet he doesn’t begin to understand. And that’s fewer than half the films on the roster. See the Cinerama website for the full schedule. —M.U..

If Edward Hopper were to probe this country’s racial wounds in the unlikely context of picturesque scenes of coastal Maine, he might deliver something like the paintings of Mark Beck. Beck’s oils-on-canvas have an immediate seductive appeal that underplays the tough subject matter they take on. In his artist’s statement, Beck says his aim is “to identify the subtexts of what America is and what is really going on under the surface.” His new body of work, focusing on the African-American experience, required him to overcome worries about “being a white artist painting Black people.” The work ranges from haunting portraits that carry hidden messages about lynching and racial exclusion (“Not Too Loud,” “The Tree,” “Rural County, 1948”) to surreal catastrophes in which quaint homes are swept over Niagara-scale waterfalls or into tsunami-filled inlets (“Sold Down the River,” “White Wash”). Sometimes his titles stand in tricky tension with what’s being depicted. “One Drop Rule,” for instance, portrays a young African-American girl staring out a window at a seascape that she’s just barely tall enough to see. Her sense of exclusion from this oceanic expanse is palpable and is suffused with a Hopper-like melancholy. The deft execution of these naturalistic-with-a-twist canvases is deeply appealing. Beck’s willingness to wrestle with a country that’s falling well short of its self-declared goals is impressive. —M.U.

If you go: American Narratives, Patricia Rovzar Gallery through Aug. 31

Smashed glass versus delicately curlicued glass — that’s the dynamic at work in two new eye-catching shows at Traver Gallery. Lino Tagliapietra’s La Poesia Della Forma finds the legendary Italian glass artist in exquisite form. Some of his new works (“Dragon,” “Angel Tear”) offer lace-fine patterns of bright swirling colors, while other pieces take a monochromatic approach to their subject matter. “Medusa,” for instance, is an ovoid form in baby blue that has two stylized, creepy eyes set afloat in it. “Tornado” is a sheet of glass with crazily busy wind patterns colliding on it. Standing in stark contrast to Tagliapietra’s masterfully controlled work is John Kiley’s Radiant. Kiley’s specialty is exploding thick tablets of glass and then reassembling them (he calls them “fractographs”). It’s about chaos and chance and preserving the one-of-a-kind patterns that deliberate destruction creates. (A short documentary shows his process.) While his work is more one-note and repetitive than Tagliapietra’s, there’s no denying its perverse appeal. —M.U.

If you go: Lino Tagliapietra and John Kiley, Traver Gallery through Sept. 1 (Tagliapietra) and Sept. 29 (Kiley)