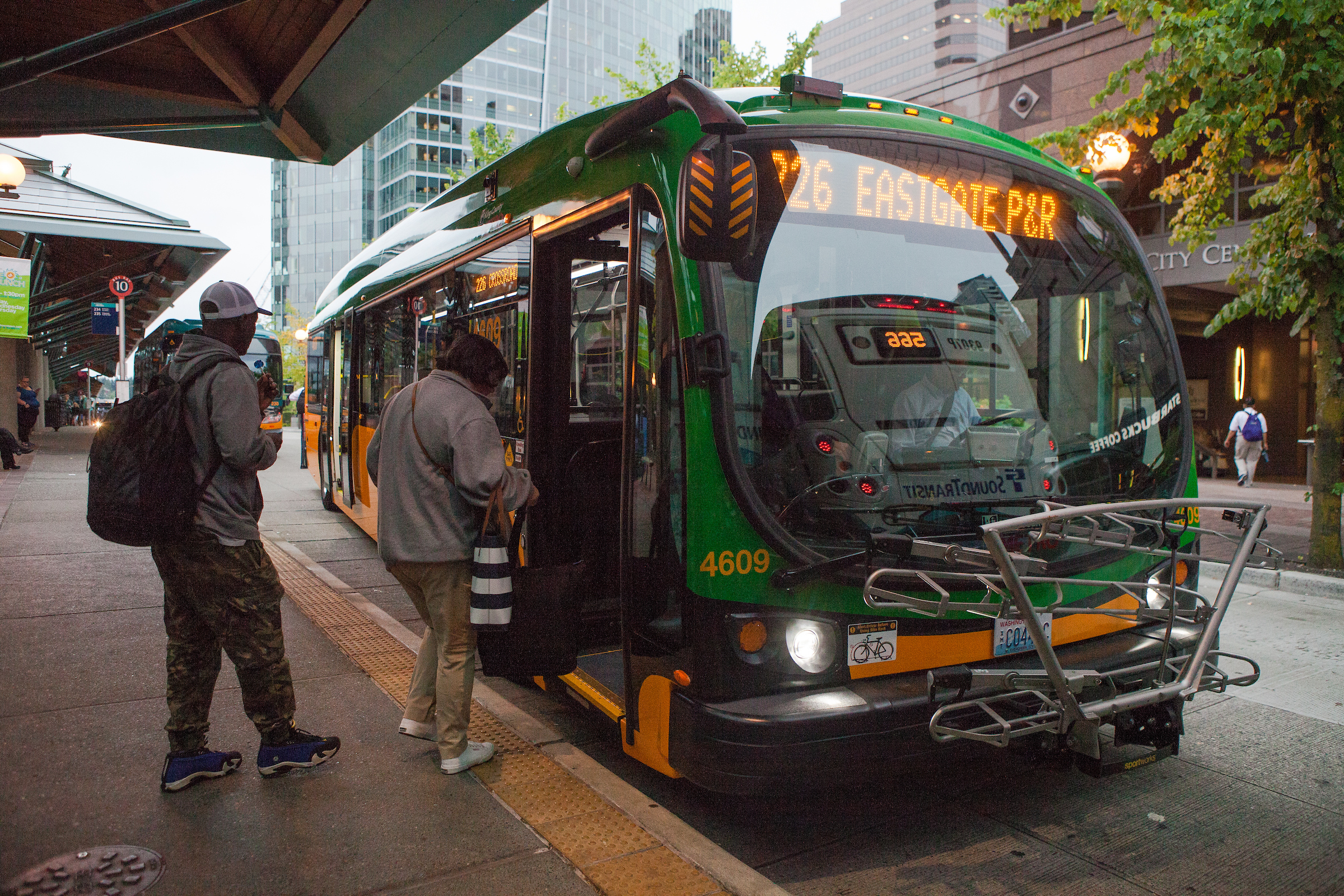 Riders board one of King County Metro's all-electric buses in Bellevue, Aug. 1, 2018. (Photo by Jovelle Tamayo for Crosscut)

It can be disgusting to stand on a street corner as a diesel bus accelerates past and leaves a trail of smog in its wake. But until recently, transit agencies didn’t have much choice but to use the exhaust-belching diesels on most routes.

Now, battery electric buses are gaining a toehold. They can save transit agencies tens of thousands of dollars per bus per year in reduced fuel and maintenance costs while eliminating the toxic, carcinogenic emissions of their diesel-powered counterparts.

A new report from environmentalist and consumer watchdog groups frames electric buses as a win-win-win for city governments, the environment and citizens.

The Puget Sound Clean Air Agency calls diesel exhaust “a leading source of toxic air pollution and our highest health risk in the Puget Sound.” The problem can be particularly serious for those living along major transportation corridors, the agency says. Since low-income communities and communities of color are often located along highways (or had highways constructed right through them), diesel exhaust contributes to socioeconomic health disparities.

Despite the potential benefits of cleaner, less expensive operations and a 2007 Washington state law requiring all local, county and state agencies to convert their vehicle fleets to electric or biofuel “to the extent possible” by this year, all-electric buses are the exception rather than the rule for transit agencies in the Puget Sound region.

King County Metro is leading the charge with 11 battery electric buses in operation on two routes in Redmond and Bellevue. The agency plans to buy 120 more by 2020, on its way to meeting a goal of being fully electric by 2040. They also have 174 electric trolley buses that operate on the overhead wires in Seattle and 1,111 diesel-electric hybrids.

Sound Transit, which operates 307 buses throughout the region along with its light rail system, has no all-electric buses, nor any immediate plans to purchase them.

Nationally, the picture isn’t much rosier, with less than 1 percent of buses running on battery electricity. About 12 percent of buses nationwide are hybrid electric-diesel. About 17 percent use natural gas. And 60 percent still run on diesel.

But Bruce Speight, state director of Environment Washington, which co-authored the new report with the Frontier Group and WashPIRG, thinks the case for battery-powered electric buses is becoming too compelling for agencies to ignore.

“It’s a no-brainer for transit agencies to invest in the technology of electric buses as they’re replacing buses in their fleets,” says Speight. “Not only will it save them money over the life cycle of the bus, it will be good for public health and the environment.”

Electric buses are still more expensive than traditional diesel buses or hybrid electric/diesel buses. Metro paid $853,691 for each of its 40-foot battery electric buses. Their 40-foot hybrid buses each cost $713,305. But the annual savings per all-electric bus per year can be substantial. According to the report, “Electric buses can be more affordable than fossil fuel buses in the long run, since they have 30 percent fewer parts, no exhaust systems, their braking systems last longer, and they don’t require oil changes or fossil fuels.” 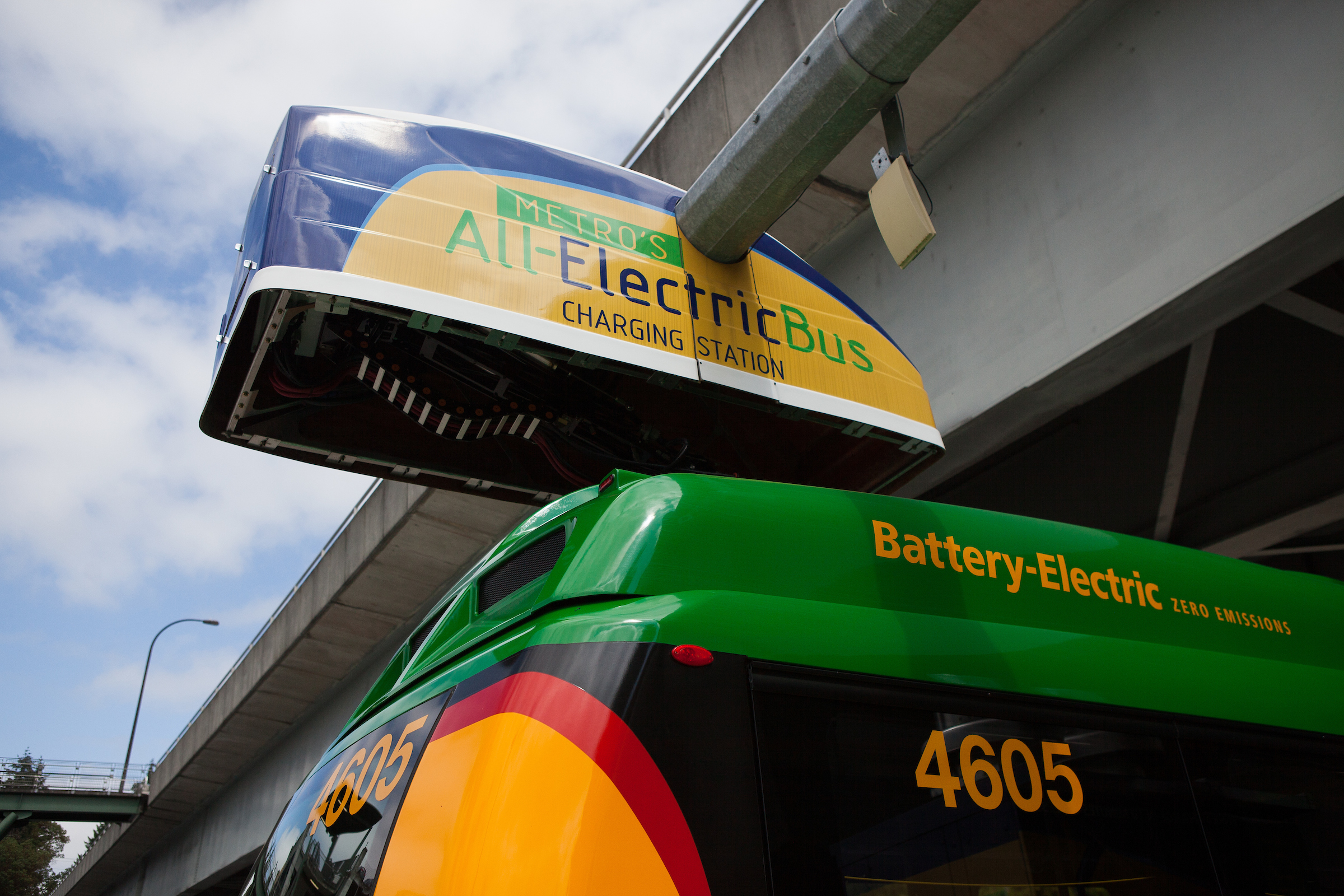 A King County Metro battery bus charges at the charging station at Eastgate Transit Center on Wednesday, Aug. 1, 2018, in Bellevue, Wash. The battery busses take 5-10 minutes to fully charge, and the busses stop to charge after going through their route. There are 11 battery busses in the fleet and four go into service at a time. (Photo by Jovelle Tamayo for Crosscut)

A King County Metro battery bus charges at the charging station at Eastgate Transit Center on Wednesday, Aug. 1, 2018, in Bellevue, Wash. The battery busses take 5-10 minutes to fully charge, and the busses stop to charge after going through their route. There are 11 battery busses in the fleet and four go into service at a time. (Photo by Jovelle Tamayo for Crosscut)

In 2014, Chicago purchased two fully electric buses, becoming one of the first major U.S. cities to do so. The Chicago Transit Authority reports that the agency saves $25,000 on fuel and it calculates that the cleaner air saves $55,000 on the “avoided healthcare impacts” per bus per year.

In a 2017 report, King County Metro calculated their annual operation cost savings at a more modest $10,000 per bus. Metro Spokesperson Jeff Switzer says their fully electric buses have not been in operation long enough to get a definitive financial picture, but, “operating cost savings look increasingly promising. They’re greater than what we published in our 2017 zero-emission feasibility report.”

Speight says one of the best benefits of electric buses is that they don’t run on diesel. Diesel soot is laden with toxic chemicals including “known or suspected carcinogens such as benzene, arsenic and formaldehyde.” Buses running on fossil fuels also contribute to climate change. In Washington state, the transportation sector accounts for around 43 percent of Greenhouse Gas emissions.

Still, it is not surprising that there are so few electric buses operating in the U.S. The technology has only come online in the last several years and public agencies tend to loath unproven experimenting. There’s also the fact that the typical lifecycle of a transit bus is 12 years. If a bus was purchased just before battery electric buses started becoming available, it might have as many as eight or nine years left on the road.

Metro’s Switzer says there are a few hurdles to overcome as they try to move to an entirely battery electric bus fleet. The first is the ability of the equipment they need. He says Metro has the largest fleet of 60-foot articulated buses (they’re the long buses with the accordion center section) in the country. The U.S. only got its first electric 60-foot articulated bus in May 2017.

Switzer says there are also still issues around standardizing bus-charging infrastructure and questions of how best to add charging stations to the agency’s existing bus bases.

The agency has a goal of making their buses carbon neutral by 2050 and expects electric buses to be “part of that equation.” But for now, Cunningham says, “Some of our current limitations include the fact that we are about halfway through the expected lifespan of our bus fleet, and our business model, which relies on our partner agencies operating and maintaining our buses, limits what we can do in terms of propulsion shifts.”

Speight is sympathetic that public agencies have to factor in bus lifecycles and cost into their decision making. But, he thinks the case against shifting is getting thinner. For one, there’s money on the table to buy electric buses and charging stations with. As part of the Volkswagen scandal settlement, which involved the automaker’s deliberate understating of its diesel emissions, Washington state got more than $112 million and plans to spend about 45 percent of it on electrification of trucks and buses.

“This is an investment that’s going to have immediate public health and environmental benefits in communities in Washington,” Speight says. “You have to eventually replace buses anyhow. As agencies replace their fleets they must invest in electric.”