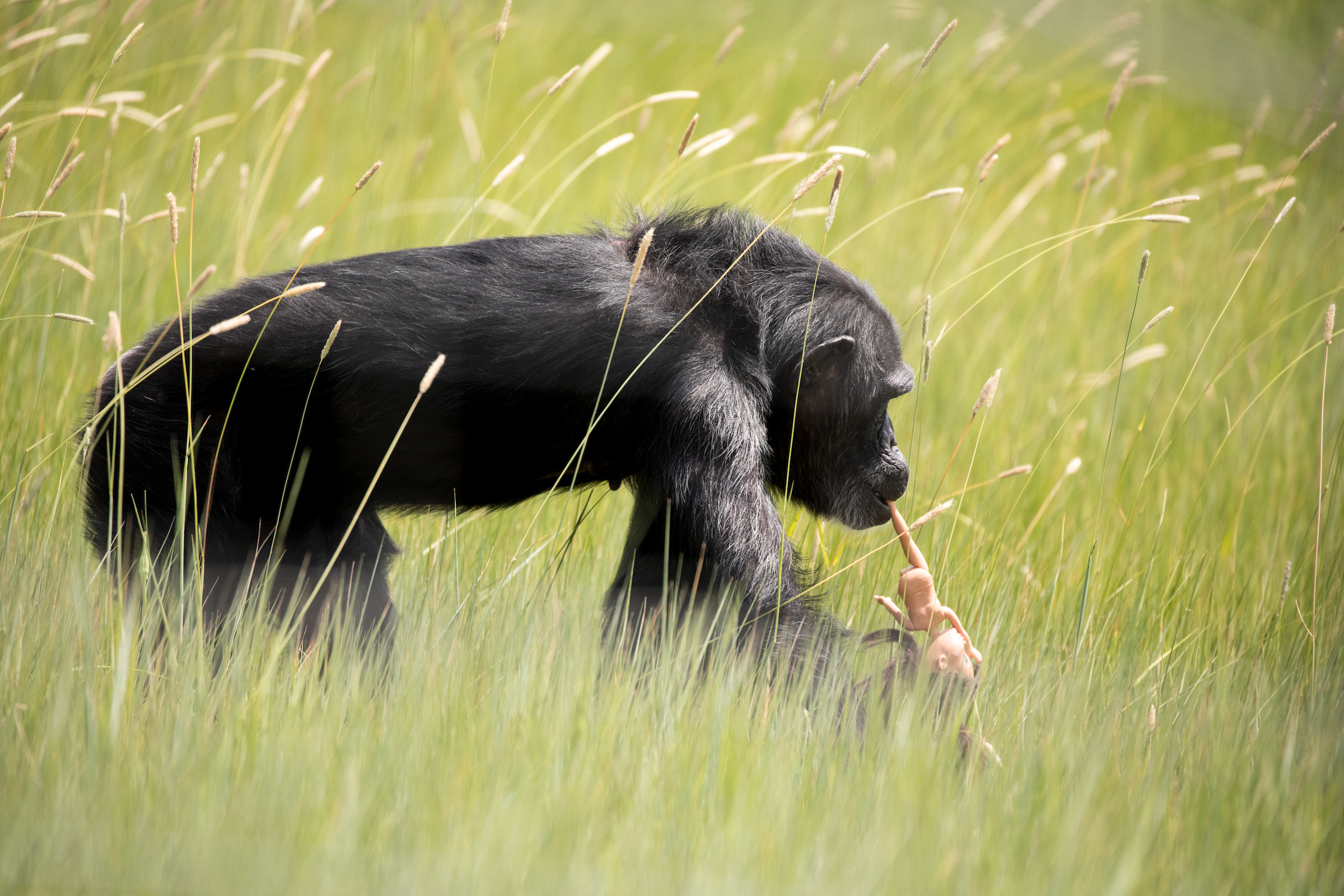 Foxie was born in captivity in 1976 and used in hepatitis vaccine research and as a breeder for the biomedical research industry. Now she lives at Chimpanzee Sanctuary Northwest, near Cle Elum, where she bonded with a troll doll within a month of her arrival. Donors have provided her with hundreds more, according to the non-profit organization.
(All photos by Matt M. McKnight/Crosscut)

“You want to know how super-intelligent cyborgs might treat ordinary flesh-and-blood humans?” asks popular historian Yuval Noah Harari in his book Homo Deus. “Better start by investigating how humans treat their less intelligent animal cousins.” This is not exactly heartening. But when it comes to our treatment of chimpanzees, things are improving right here in Washington. One need only look in the hills above Cle Elum for proof.

At Chimpanzee Sanctuary Northwest, chimps rush into a big caged room, scamper across the newly bleached concrete floor, climb the heavy wire of the enclosure, and chase each other around while hooting. Burrito, the lone male, displays dominance by pushing an upright length of ribbed black plastic culvert around the room.

Burrito and his pals have started their active day, thriving improbably in the Cascade foothills. He and six other chimps have lived there for a decade. They’re all retired: Most worked in labs before they came here, but one was an entertainer. The sanctuary’s co-directors, Diana Goodrich and J.B. Mulcahy, live in a house near the main building. An old, unpainted wooden barn stands nearby. No sign marks their driveway, and they don’t readily give out their location because they don’t want the distraction outside visitors would bring.

But without access to government funds, they do rely on outside donors — and with donations in hand, they have started expanding the sanctuary and its care. They’ve added acreage  and what they hope will be the first of several new structures to the sanctuary.

A Yakima contractor poured a concrete slab in early August. They expect a new veterinary building to be finished by the end of the year. With these improvements, Goodrich and Mulcahy are helping humanity atone for an ugly history of using our closest non-human relatives for research and entertainment.

Goodrich and Mulcahy don’t do all the work alone. Primatology students from their alma mater, Central Washington University (where the famous chimp Washoe and others once learned American Sign Language) gain hands-on experience as interns while doing much of the endless daily work.

Behind the building, a tall wire fence, double-layered, with burly posts and braces encloses a two-acre outdoor exercise yard that runs from the back door of a translucent “greenhouse” area up a grassy hill. Chimps originate from equatorial Africa, but it gets cold in Cle Elum. How do they fare in the Northwest weather?

“I call them Northwestern chimps,” Goodrich says. She says they actually seem to like cool, cloudy days. They go out in virtually all weather, although when it's really cold, they don't stay out long.

There’s more than enough room for the chimps to get space from each other, but Goodrich says they mostly prefer to hang out in groups. In peaceful moments, four or five of them will flop over onto each other in a big chimp pile.

The fence is also electrified. The sanctuary has backup generators to make sure that even if a storm or other event knocks out utility power, the fence wire will stay hot.

Later, from inside the chimps’ enclosure, comes a sound like the breaking of rigid plastic. A chimp named Foxy is cracking whole walnut shells with her teeth. In the jungle, Goodrich explains, chimps encounter nuts with shells so thick their jaws can't crack them. So, the chimps use tools: They’ll find a natural anvil, place the nut on top, and hit it with a rock to get the meat. Chimps pass the technique down to younger generations. Different bands of chimps use different techniques and tools, but researchers have found that a lone chimp entering a new troop adopts that troop's technique, even if the technique is inferior. Goodrich says that other research shows chimps crack nuts more efficiently than humans do with access to the same primitive tools.

Research labs pumped up their chimp populations in the 1980s, when the AIDS epidemic prompted a scramble to get a handle on the disease. But it’s difficult to give chimps human AIDS, so their relative ineffectiveness in scientific efforts for a cure led to an immediate surplus. The notion that our closest non-human relatives would be uniquely valuable for medical research hasn't panned out, Goodrich explains. Kathleen Conlee, the Humane Society’s vice president for animal research issues, says "We call that the 'high-fidelity fallacy.'"

This doesn’t mean all the chimp research proved worthless. It may have been crucial in distinguishing Hepatitis C from Hepatitis B. “Obviously,” Conlee says, “gains were made. Could it have been gained another way? We will never know.”

Two recent developments hobbled chimp research in the U.S. In 2015, the National Institutes of Health decided to abandon it, and the U.S. Fish and Wildlife Service included captive chimps in its endangered species designation. Before that, only wild chimps had been listed as endangered; the USFWS made an exception for lab chimps.

Normally, unneeded laboratory animals are euthanized. But the National Research Council panel decided the nation’s no-longer-needed chimps should not be killed. “That has not been decided for any other animal,” says Conlee of the Humane Society. Instead, the panel ruled that retired chimps should be sent to sanctuaries. Panel members realized this would require decades of support. Chimps that worked for the federal government would be supported largely at the expense of taxpayers, which led to Congress deciding to pay for a national sanctuary system with the so-called Chimp Act of 2000. But this didn’t provide for privately-owned chimps like the ones now housed at Chimpanzee Sanctuary Northwest , who came from a private company in Pennsylvania that provided chimpanzees to labs.

If the expansion project goes as planned, Burrito and friends can look forward to company. Goodrich and Mulcahy hope that once they've demonstrated progress and competence with the current phase of their expansion, they’ll be able to raise the larger sums needed to expand the chimps' basic living area so they can accommodate more animals. They think that future chimps could help current chimps form a whole new social group.

Even before new buildings take shape, Chimpanzee Sanctuary Northwest's footprint has already grown. It has acquired three adjacent properties to expand from 26 acres to 90. It now has buffers on all sides, so Goodrich and Mulcahy won’t have to deal with neighbors who don't like the sound of chimps hooting. They’ll face no conflicts over water, and they’ll have space for rescued farm animals to graze. They can build an education center. Goodrich says that with the extra land, the sanctuary could expand its outdoor exercise yard up the hill and into the trees. There, chimps would actually be able to climb. (Some trees would have to go to prevent chimps from using them as launching pads for leaps over the electric fence.)

Even as the sanctuary works on an expansion, there’s a recognition that health care will only grow more important for both current and future residents. Chimps live a long time and like the rest of us, they tend to accumulate ailments. Goodrich says the Cle Elum seven will probably have to contend with arthritis and heart problems. Heart issues are common in male chimps, and Burrito already has congestive heart failure, for which he takes daily medication.

Better health outcomes require better patient behavior — which is something Goodrich is trying to teach the sanctuary chimps. Ideally, she says, Burrito would just present his chest to the openings in the cage wire so a vet could do an ultrasound without sedating him to take him out of the building. Maybe that will happen. She says other chimps are already learning to present various body parts so humans outside the cage can do blood draws and other small procedures. If a chimp isn't sure what part is wanted, it will simply use trial and error until it comes up with the right one. But that isn't always necessary, she says, noting the legendary learning capacity of chimpanzees: “They understand a lot of English.”