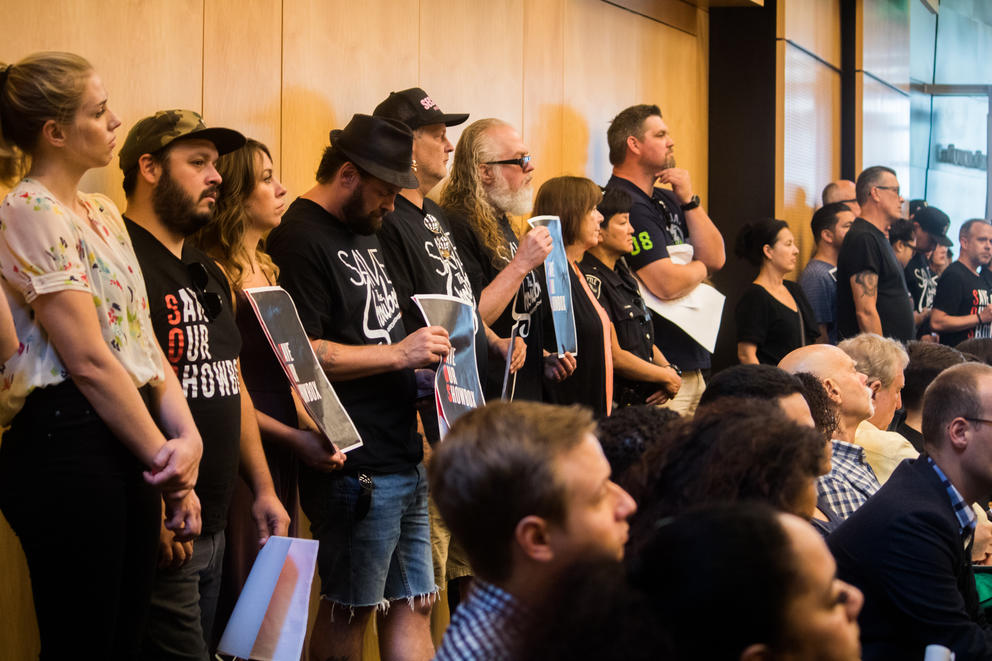 Showbox supporters stand at the back of council chambers during the Monday vote. (Photo courtesy of Seattle City Council via Flickr)

It will be much more difficult for a developer to tear down the Showbox — at least for the next ten months. In an 8-0 vote Monday, the Seattle City Council expanded the boundaries of the Pike Place Market Historic District to include a chunk of land that is the site of the threatened music venue.

The decision amounts to a downzone, replacing the current height allowance of over 400 feet and subjecting the land to the strict oversight of the Pike Place Market Historic Commission. That means any change — from the size of the building to the color of the paint on the outside — will need the commission’s approval.

“This is not against change,” said Councilmember Kshama Sawant. It’s about “on whose terms does change happen in Seattle?”

The council set a date of June 2019 for final legislation.

The Showbox fight has cut to the core of Seattle’s thorniest debate: How to grow.

Late last month, news broke that a company from British Columbia was planning to put a 44-story high rise on the site of the Showbox. The revelation set off alarms among music fans, bands, historic preservationists and much of the public, already feeling that the city is changing rapidly. A counter chorus soon emerged, stating that the attachment to the building was little more than nostalgia and obstruction to much-needed new housing.

Then Councilmember Kshama Sawant raised the idea of extending the boundaries of the nearby Pike Place Market Historical District to include the Showbox. She said that, if done quickly, the expansion of the historical district could outpace the ability of the developer — Onni Group of Vancouver — to finalize its purchase and potentially demolish the theater.

Sawant initially proposed expanding the Market’s boundaries to include everything on the east side of First Avenue — which would have included a brand new hotel, a Starbucks and a strip club.

But in subsequent meetings, the council elected to only extend the boundary to the parcel on which the Showbox sits.

“The Showbox theater is a significant cultural resource to Seattle and the region with a history connecting it to the adjacent Pike Place Market,” reads the council’s legislation. “The loss of the Showbox Theater would erode the historical and cultural value of the Pike Place Market neighborhood.”

Councilmember Teresa Mosqueda framed the issue in broader terms, arguing that if the city allowed more development in other parts of the city, the Showbox may not be endangered. “It doesn’t have to be a false dichotomy,” she said. “We must be able to preserve cultural hubs where people can come together” while also building enough housing for people to live.

She used her vote as a call to action. “Will you work with us to create affordable housing and a cultural center going forward?” she asked a crowd of Showbox supporters who had gathered in council chambers. They cheered.

The decision seems likely to be met with a legal challenge, raising questions about the city acting on behalf of a single, privately owned business.

Representatives from the potential developer, Onni Group, could not be reached for comment.

A letter to the council from attorneys for Showbox owner Roger Forbes, first reported on by journalist Erica Barnett, states that the building magnate has become “increasingly concerned about some of the recent statements, proposals and actions taken by certain Council members regarding the zoning of this property. These actions have occurred over the last several days without slowing down to hear from the property owners along First Avenue and other parts of the city who might be affected adversely should the City take action against properties.”

For her part, Sawant was energized, calling on the council and community to harness the lightning pace of the process to expand the boundaries Pike Place Market to other efforts, such as reviving the so-called head tax that was approved then quickly repealed. “Maybe we can win the Amazon tax that was repealed, maybe we can win a tax on big businesses," she said. "Why should we stop with just saving the Showbox?"