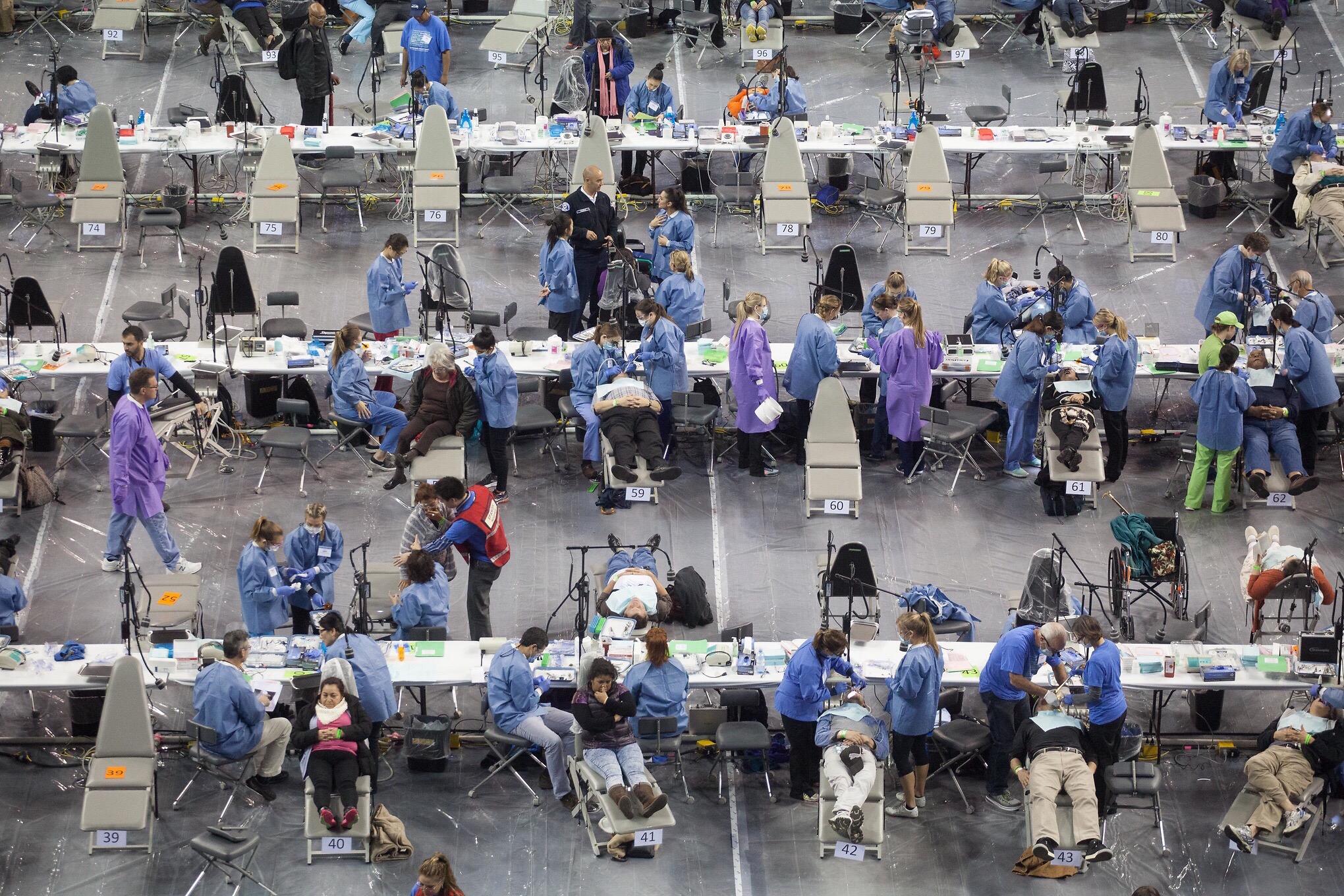 Dental care is a big part of the annual Seattle/King County Clinic at Seattle Center. (Photo by Matt M. McKnight/Crosscut)

Dr. Alex Narváez remembers when the dental clinic at Sea Mar’s White Center facility where he worked couldn’t handle all its patients. If he had discovered a bad tooth infection 35 years ago, he says, he had little choice but to stick the patient in a taxi, pay the fare himself, and send them to a hospital.

A recipe for all sort of legal liabilities.

But at the time, the Sea Mar clinics weren’t equipped — financially or technologically — to handle serious dental infections. Sea Mar was founded in 1976 to help the poor from all communities, but specialized in Latino patients. When he started in 1982, Narváez, who directs Sea Mar’s dental services, was the only dentist at the fledgling operation and he was working with borrowed equipment. Today, the clinics are equipped. Besides boosting its capabilities to treat patients with complicated dental problems, Sea Mar has also increased the number of those patients it can handle.

This is because the Washington Legislature included an extra $4.9 million in its capital budget last spring for an expansion of six King County Sea Mar dental clinics.

Statewide, the Legislature appropriated more than $16 million in capital support for improving oral health care for those on Medicaid or without any dental insurance. Lawmakers leading the charge, including Sens. David Frockt and Mark Mullet, argued that the money was needed to address a crisis in oral health affecting both urban and rural residents.

Advocates say that the money from the Legislature is making a difference but certainly won’t solve the larger challenges by itself. Last week, at the Seattle Center Foundation’s annual four-day Seattle/King County Clinic, dental care was one of the most requested services.

“Statewide, fewer than a quarter of adults on Medicaid, and a little more than half of Medicaid-insured kids, saw a dentist last year,” said Diane Oakes, CEO of the nonprofit Arcora Foundation.

Sea Mar’s White Center facility received $183,000 to help convert some spare space, increasing the number of total dental chairs from eight to 16. That means serving an extra 7,000 patients a year at White Center. At other King County clinics, the legislative infusion has added an additional 12,000 dental patients.

White Center is one of 27 main clinics and 306 clinics and satellite operations for the Washington Association of Community & Migrant Health Centers. Like Sea Mar, many of them around the state hope to continue to add dental care capacity. Founded in 1985, the association is a collection of health centers that focus on immigrant and Native American people.

Sixty-one percent of the association’s patients are on Medicaid or the federal Children Health Insurance Program. Sixteen percent are uninsured. Eight percent are on Medicare. And 15 percent have private insurance. Many patients pay only as much as they can afford in a sliding scale.

The work on expansions and new facilities with the legislative money is well underway, according to Bob Marsalli, CEO of the association of health centers. He said the state health care authority will work on projections of what could be done with additional funding. "We are just beginning to scratch the surface in terms of [serving people] who need and deserve oral health care," he said.

At the White Center dental clinic — part of Sea Mar’s bigger White Center medical clinic — two orthodontists, two dentists and 10 dental assistants serve a clientele that is largely poor. Some are coming to a dentist for the first time and many don’t speak English. Their native languages range from Spanish to Farsi to Vietnamese to Mandarin to Russian. Many are recent immigrants. About 40 percent are Hispanic, about double the percentage of Latinos that Narváez saw in the 1980s, he says. Many have only part-time jobs and many others have multiple jobs with no benefits.

“We don’t turn anyone away,” said Jenny Vigil, the manager at the White Center dental clinic.

Often, a trip to the dentist is low on a priority list for a population that has long known that it is hard to find care. And they are struggling to put food on the table, pay rent and keep a car running. “They have dental problems because it’s the least [immediate] of their worries. … It took me awhile to see it from their perspective,” Narváez said.

“We serve the disenfranchised, those often overlooked. It definitely makes a positive impact on their lives,” said Dr. Mohammad Mainayar, one of the clinic’s orthodontists. “All this (dental work and braces) affects them, psychologically, alters their demeanor. It makes them feel more included in the society that they live in.”