Pristine nature is a fantasy, no matter how remote the island 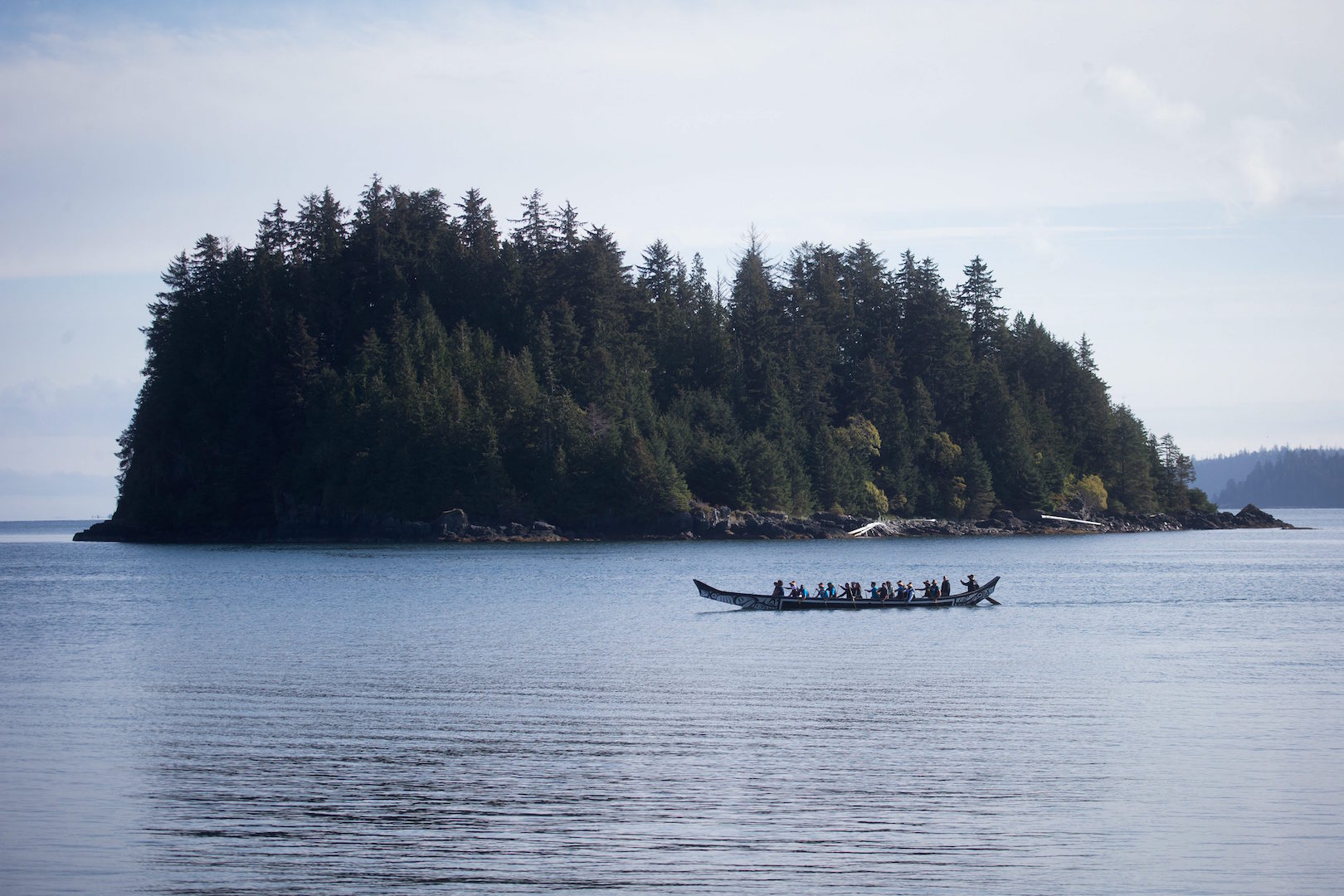 The Duke and Duchess of Cambridge paddle a canoe with members of the Haida First Nation in Haida Gwaii, B.C., on Sept. 29, 2016. (Photo by Darryl Dyck/The Canadian Press via AP)

We felt a bit guilty. It was August and my wife and I were enjoying the fresh Pacific air while Seattle and much of the West choked on wildfire smoke. Folks back home were inhaling what amounted to smoking multiple cigarettes without the compensation of looking as cool as James Dean.

The smoke was so bad that one Northwest senator has proposed a law directing FEMA to fund housing for “smoke refugees” — people gasping for breath when wildfire smoke blankets their communities. Kind of like seasonal flooding, only with bad air.

By chance, we escaped Smokocalypse on a pre-planned trip to Haida Gwaii, a chain of remote islands some 600 miles north of Seattle and 80 miles off the British Columbia coast, just south of Alaska. The skies were mostly blue, the fresh air gulpable, and the islands, out of sight of the mainland, felt a world away.

Even when you travel to remote and wild areas these days the impact of humans on the environment is never far from view. It feels sometimes difficult to soak up the natural beauty and simultaneously process the level of threat. Still, both are palpably present.

Remote as it is, Haida Gwaii, home of the Haida people, is hardly untouched. On a forest hike with two young Haida guides, we walked through very mature second growth forest, perhaps 100 years old or more. Old growth cedar stumps sprouted enormous spruces. Some of these forests have been cut two or three times over already. In places, much of the forest floor has been munched over by deer, introduced by relatively recent residents. Logging continues and some of the islands’ interiors are vast clear-cuts. On Graham Island, drivers are warned to take seriously the signs on logging roads proclaiming their operators have the right of way.

The southern third of the archipelago is protected by the Haida and Canadian government as the Gwaii Haanas National Park Reserve and Haida Heritage Site. The site was saved from logging after Haida native activists and elders blocked expanding timber-cutting there in the '80s and forged an agreement with the government to protect it. But elsewhere, logging continues.

The trees on Haida Gwaii are said to grow much faster than elsewhere, a commercial benefit. And in some areas, the bears help that growth. Our Haida guide Hanna told us about the phenomenon of a “salmon forest.” On these islands, there’s a unique subspecies of black bear that is big, with large heads and jaws. They feed at the rivers on salmon with no competition from grizzlies and eat only the best parts, leaving the tails and heads to fertilize the woods along the streams where the forest is lush.

During at least 10,000 years of living there, the Haida themselves have cut trees for poles and longhouses and stripped bark for weaving rope, clothes, and baskets. Some of these “culturally modified” trees are still visible and some practices continue. There are many Haida artists working on the islands. On a tour of 21st century carved totem poles at the Haida Heritage Centre in Skidegate we were told that that the huge cedars for poles and large canoes for which the Haida are famous are harder to find these days. It takes six to eight weeks to locate a single suitable large, straight red cedar for a pole and it will likely have to be airlifted out by helicopter from a remote area.

The contrast between native use and industrial use is striking — the selective and sustainable vs. the wholesale. It is impossible to see nature alone in Haida Gwaii: The ancient human presence is powerful in North Coast indigenous art and community, and so is the business of modern extractive practices. We weren’t inhaling wildfire smoke, but we were taking in both nature and our complex relationship with it.

The trip to Haida Gwaii offered other moments. We came by boat — BC ferries first from Port Hardy at the northern end tip of Vancouver Island for a 16-hour trip up the Inside Passage, then a six-hour ride from Prince Rupert to the island chain. In native communities along the way, we saw signs protesting against oil pipelines, tankers, and salmon farming. One of my favorites, that referred to a fish species: “Oolichan oil NOT tar sand oil.”

The modern BC Ferry “Northern Expedition” is laid out so that passengers can soak up the scenery. In the front is the Aurora Lounge where, for an extra 37 Canadian dollars, you see the Inside Passage through picture windows from the comfort of a Barcalounger-type recliner. You will spend hours passing uninhabited forested islands and navigating narrow channels. You may well see humpback whales, sea lions, porpoises and orcas. The scenery is incredible, the wildlife seemingly abundant, the wilderness feels vast and untrammeled.

Yet, when you arrive in Prince Rupert, you are greeted by a large port shipping coal to Asia. And in those island forests you passed by, were stands of dying trees, likely yellow cedars, which are being impacted by climate change as their shallow roots are no longer protected by seasonal snows that have turned to rain. They are dying off on the Northwest Coast and Alaska, and have been for over a century, but the process is speeding up.

Just south of the village of Namu on the BC coast I saw the only orca of the entire trip. Namu was where the first killer whale was captured and sold to a Seattle aquarium back in 1965, and given the name of the place where he was taken. The solo orca I saw appeared to be feeding, but I couldn’t help thinking about the southern population that is struggling to survive in the Salish Sea and of a single orca carrying her dead calf as a reminder of our impact on this ancient population.

We’ve all had a bit of a purity fetish about nature, desiring to see it in a state where it is not impacted by human interference, but such places do not exist anymore. Indeed, even while wild areas can still seem vast and are extraordinarily beautiful, if you really look off the trail, over the railing — or more closely from the Barcalounger — you are seeing a much more complicated world. And even if you don’t, the wildfire season is turning into an annual reminder that climate change and other impacts cannot be ignored, even when you stay home.