Seattle’s midlife crisis: Been there, done that

Thirty years ago, I found myself at Seahawks headquarters, then located in Kirkland, with some of the biggest Seattle personalities of the 1980s: Bill Gates, football player Brian “The Boz” Bosworth, Seahawks coach Chuck Knox and Gary Wichard, Boz’s agent, who was the inspiration for the movie Jerry Maguire. It was a transitional moment for Seattle culture, a clash between flash and substance, old Seattle and new. And it all came together during a photo shoot that captured that moment for the city. Looking back, it has resonance as Seattle culture continues to shift, whether it’s a less-than-civil debate at city hall or a new driving culture that’s driving us all nuts. But it was also just a strange confluence of Seattle icons.

A little background: In the ’80s, Seattle was starting to get national and international attention for something other than Boeing jets. Nordstrom rose as a national chain, catering to the Reagan era’s preppie look in malls across America. A guy named Howard Schultz had taken over Starbucks and was expanding the boutique coffee roaster into a chain of espresso-fueled cafés. Gates was the guy who was going to put a computer on every desk. All of this was in line with Seattle’s self-image as a place with innovations adopted by the middle-American mainstream. 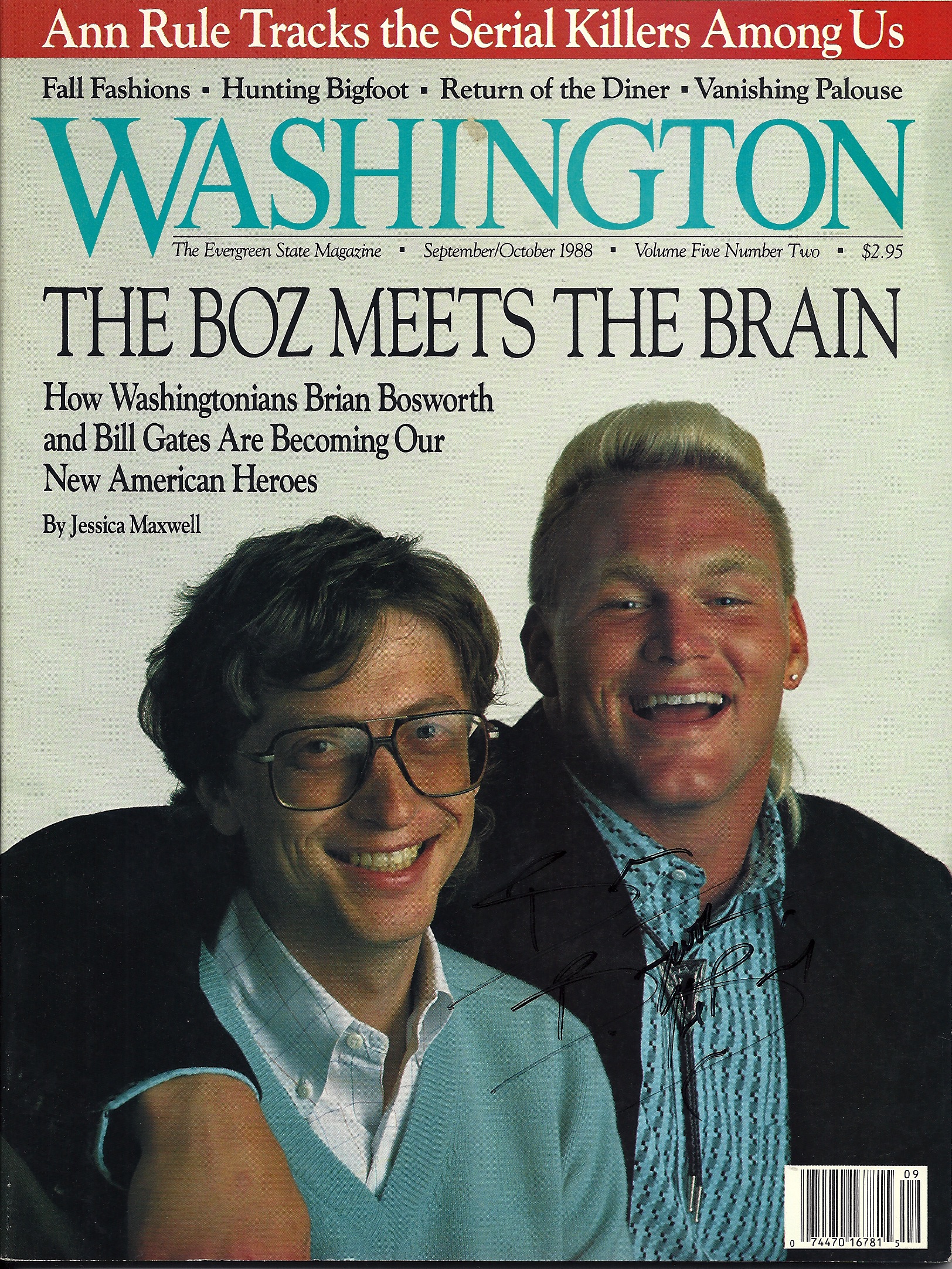 But in 1987, one guy came to town who was a disturbance in the civic force. Boz had a bleached blond Mohawk haircut. He was loud, full of bluster. He wore blue sunglasses and had been in trouble for taking steroids. He was drafted by the Seattle Seahawks to play linebacker. His personality didn’t reflect Seattle or the team whose main star was the quiet, goody two-shoes Christian, Steve Largent. Nor did Boz reflect the quiet work ethic of the team’s longstanding Nordstrom ownership, nor of Knox, who passed away this past May. Knox was a no-nonsense guy; instead of flashy passing games that were coming into vogue, he was the commander of the “Ground Chuck” meat-and-potatoes running game. When Seattle signed Boz to a record rookie contract, it seemed like a sign that Seattle’s zeitgeist was changing.

Boz was in contrast to Bill Gates, the local kid genius behind Microsoft. Gates was brash in his own way. Instead of brawn, it was brainpower. He was from an established Seattle (Laurelhurst) family and lived relatively modestly (the pullover sweaters). Yet he openly challenged the status quo, taking on companies like IBM. He was a world shifter with the face of a teen kid.

I was working at Washington, an independent statewide magazine (later absorbed by Seattle Magazine). We decided to put Boz and Bill on the cover. Gates, who’d been on tons of magazine covers already, would maybe do it if he thought it could be fun. I put together a pitch, and in those days, he had one PR handler, who loved the idea and helped me get it in front of Bill. Wichard, Boz’s agent, liked it, too, but he made all kinds of demands. We had to fly the agent up from California, and he wanted to be put up at the Olympic Hotel (now the Fairmont Olympic). We were a small-budget operation, so accommodating this was not easy, and he wasn’t even the “talent.”

Finally, we got everyone to agree to the cover shoot. But when we arrived, we learned from team PR man Gary Wright that coach Knox didn’t want Boz distracted with such nonsense, so we had to do the shoot in secret. We had to set up a studio at Hawks HQ in a conference room. So, while the players were on the practice field, we snuck Gates in and waited for Boz to arrive. Still, hiding Gates and Boz for the shoot seemed like a tall order.We almost got caught. Wichard and I stepped out to the hallway at one point, and coach Knox appeared out of nowhere, looming over us like a high school principal who has discovered two delinquents acting suspiciously. He wanted to know why we were there. Wichard smirked and BS-ed awhile, and Knox soon realized he wasn’t going to get confessions easily. He had work to do and left.

When Boz entered the studio with ice on his knee, he was all charm and charisma. He had the bulked-up body of a comic book hero. The shoot went well, but Boz and Gates fell into a kind of nerd-and-jock dynamic. I remember Boz sitting down behind Gates and just before the camera clicked, he poked the billionaire in the back with his finger and said, “Sit up now!” For fun, we got some shots of Bill wearing Boz’s trademarked blue shades. We called the story “The Boz Meets the Brain.”

During the shoot, Boz talked with his agent and his girlfriend, who had come along — lots of joking and laughing. I’d had a chance to sit and talk with Gates before the shoot. I asked him how smart computers or machines would get. He said they’ll tell us when they get there, which struck me then — and strikes me now — as a smart answer to a dumb question.

The two men appeared on the cover of a fall issue of Washington, and it made a lot of ripples. Some readers loved it, some hated it because they’d much have preferred yet another picture of Mount Rainier. Gates later told me that he got some negative blowback from friends and family for elevating the profile of the likes of Boz.

Boz’s career in Seattle never panned out. He was beset with injuries. His on-field performance didn’t live up to his hype. Many locals and fans took this as confirmation that a career based on ego and attitude was a bad idea, very un-Seattle. Our city still wrestles with shifts in culture. These days, we’re about high-rises, not bungalows. Consumption is more conspicuous than it used to be — from $200 martinis to the fleet of fancy new cars cruising city streets (though this is not that surprising in a city that has been the fastest growing in America over the past decade).

For me, the magazine cover is like something you pull out of a time capsule. “Hey look, Seattle had a midlife crisis in the ’80s!”

It’s proof that this period of growth isn’t something new, but another round of growing pains we’ve actually been through before. It’s time more people heard about it.

This column originally appeared in the August edition of Seattle Magazine.