Seattle caught between tribal rights and protecting its water supply 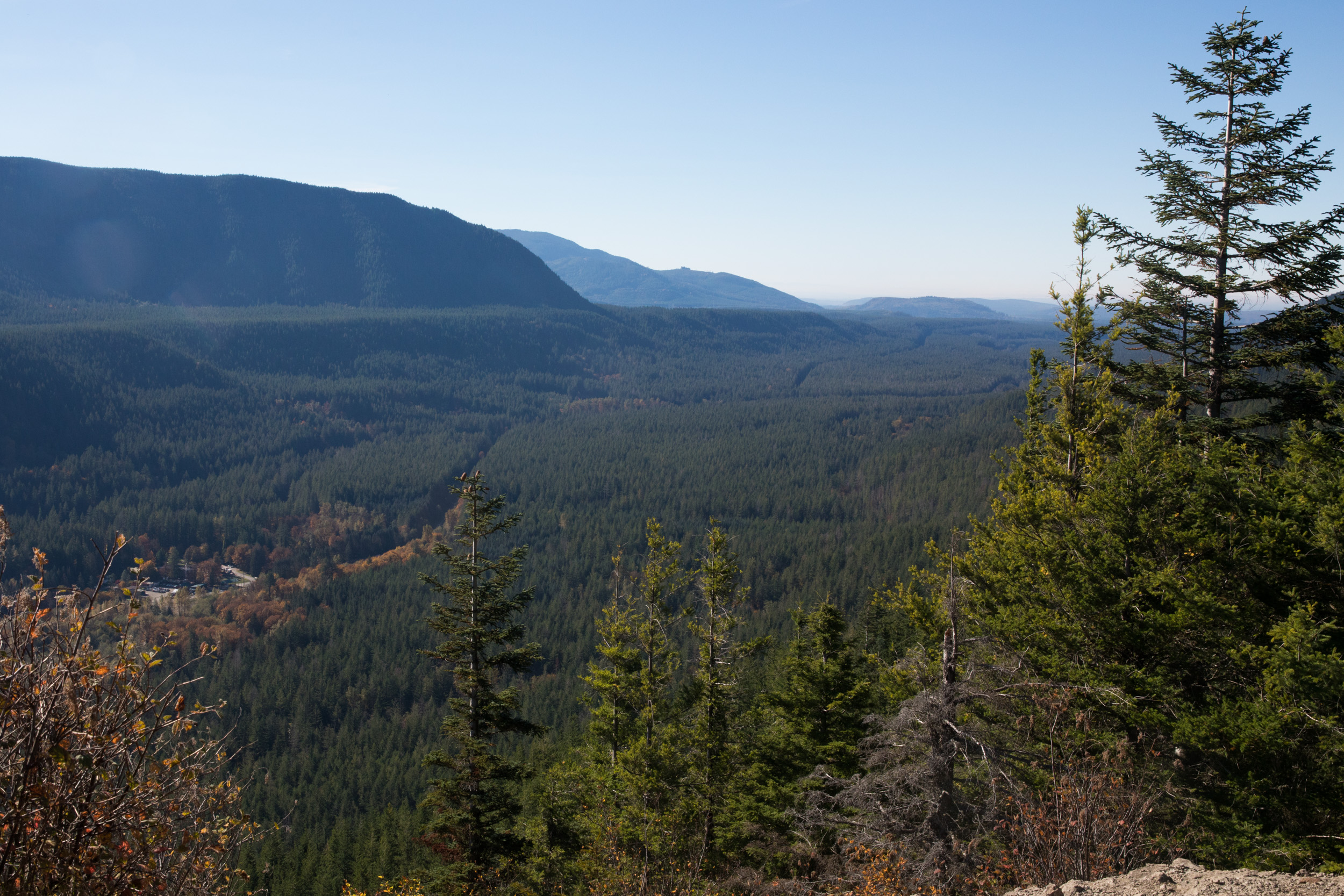 View of the Cedar River Watershed from atop Rattlesnake Ledge in western Washington state, Oct. 19, 2018. (Photo by Matt M. McKnight/Crosscut)

By early fall, Chester Morse Lake is barely visible from the top of Rattlesnake Ledge. As the snowmelt runs dry, the lake recedes deeper into the Cedar River Watershed, settling behind the forests and foothills that lie east of Seattle and just south of I-90.

Signs posted on trees along the watershed’s boundary threaten would-be trespassers with prosecution. Among the few who are allowed on this land, owned by the City of Seattle, are 60 workers with Seattle Public Utilities. They oversee the operations that protect the water and assure its delivery to 1.4 million Seattle area residents. That water is pushed by gravity through over 20 miles of pipeline and into their homes. When it arrives, it does so unfiltered; the watershed is one of only five sources in the country so clean they do not require expensive filtration systems to strain out sediment and other impurities.

While most of the region’s residents may only enjoy the watershed from a distance, the borders are slightly more porous for enrolled members of the Muckleshoot Indian Tribe. As part of a hard-fought settlement agreement between the tribe and the city in 2006, members are allowed limited access for traditional purposes — the gathering of firewood and other resources, as well as some hunting and fishing. This was their right, after all, guaranteed in treaties from the mid-1800s, and entrance was reaffirmed as part of a broader package of reparations in 2006.

But 12 years after signing on to the agreement — seen at the time as historic in its focus and scope — the city and the tribe have still never fully defined the rights of entry for the Muckleshoot tribe. The issue was tabled until 2014 when the tribe made what seemed like a simple request to the city: to camp.

The continued negotiations that followed and still continue today have exposed a conflict between the city’s desire to respect the tribe’s cultural practices and its obligation to protect a coveted municipal water supply. What is for the tribe a fairly logical extension of their long-held treaty rights is to the city an ask that must be vetted through many layers of bureaucracy. If it is not, officials fear, the result could be an end to the city’s right to provide unfiltered water and a subsequent $500 million piece of capital infrastructure.

At issue for the tribe is a list of specific requests issued to the city years ago, requesting camping access and use by family members. The tribe would like family members who are not tribal members — which can include husbands, wives, children — to join enrolled members when entering the watershed. Members of the Muckleshoot Tribal Council have also requested camping privileges there and to have occasional campfires “for cultural and ceremonial practices.”

But what are to tribal members minor adjustments to the settlement have been so far interpreted by city officials as a threat to the watershed’s delicate ecosystem and not in accordance with the deal. And so balancing how much access is appropriate remains unresolved.

The discussion is now before Jenny Durkan, the sixth Seattle mayor to handle the massive 2006 settlement since the agreement was originally signed. As a onetime lawyer for the tribe, she’s recused herself from the discussions. But that ends next month, a year after she took office.

Questions about access to the Cedar River Watershed are rooted in the signing of the treaties of Medicine Creek in 1854 and Point Elliot in 1855, land deals between local tribes and the settlers who were arriving from the east. In accordance with that treaty, native people of the greater Puget Sound region ceded territory to white settlers in exchange for the promise of reservation land and the freedom to hunt, fish and gather resources in ancestral lands off reservation, including the Cedar River Watershed.

“The treaties did more than provide lands for non-Indian settlers,” said Anita Mitchell, Vice Chair of Muckleshoot Tribal Council. “They cemented into federal law the preexisting right of tribes to hunt, fish and gather in the same manner as before the treaties were signed.” 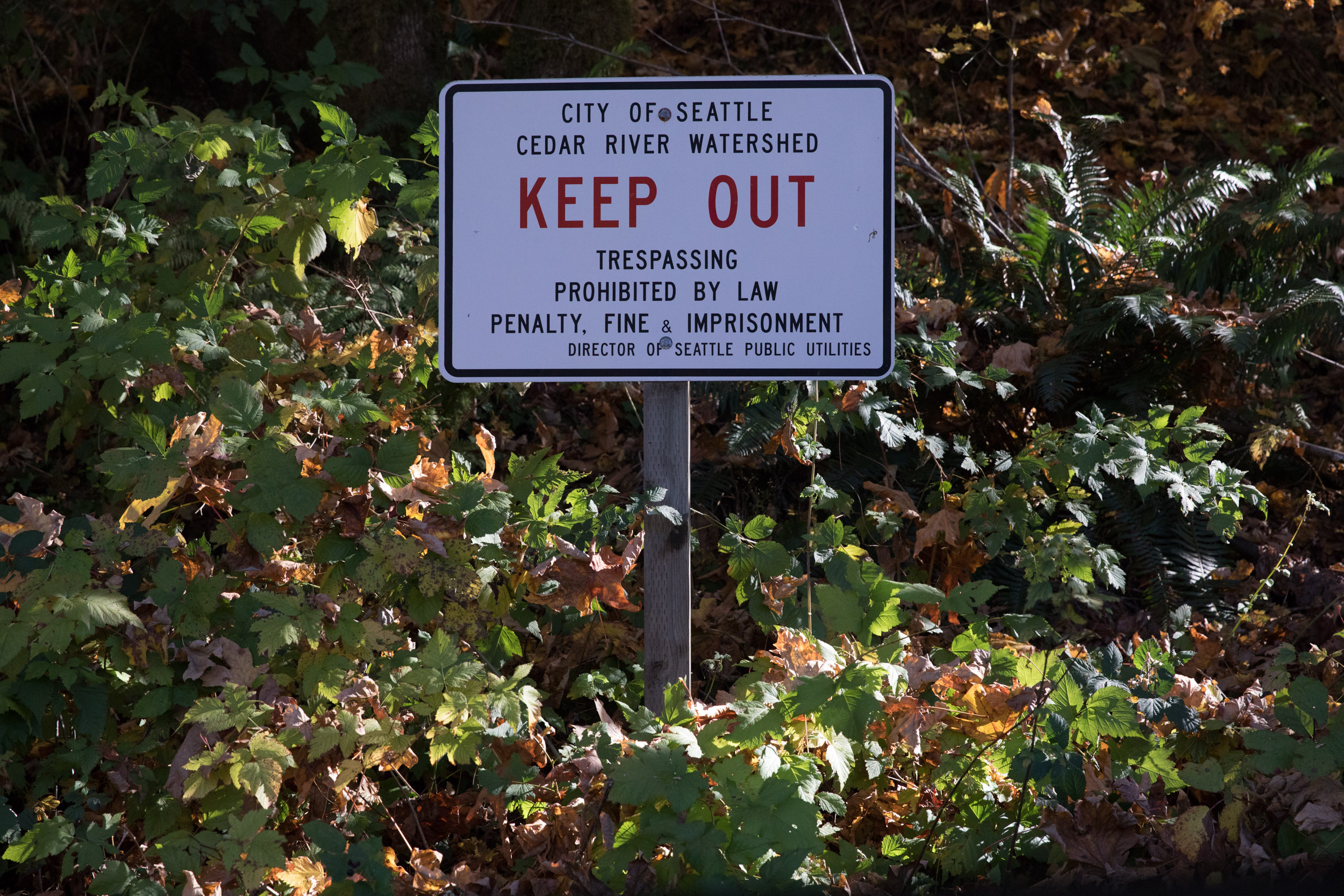 A no trespassing sign along Cedar River Watershed in Washington state, Oct. 19, 2018.

A no trespassing sign along Cedar River Watershed in Washington state, Oct. 19, 2018.

The treaty allowed continued access to the Cedar River Watershed for tribes. At the same time, Seattle began siphoning off water from the area in 1901. Recognizing its potential as a sustainable source of clean water, the city began buying it in pieces in the 1960s, taking full ownership in 1996.

But use of the watershed became complicated in 1998, when the federal government listed chinook salmon as an endangered species. The city proposed a conservation plan, which was approved by the National Marine Fisheries Service, but the tribe did not believe the plan would be effective enough and threatened to challenge it in court.

Rather than litigate the suit, the city and the tribe entered into settlement negotiations in 2003 and came to an agreement three years later.

As a part of the agreement, the City said it would do more to address the threat to salmon — by increasing water flow and establishing hatcheries — and provided reparations for historical damages to the tribe, totaling $42 million in value.

The two parties also agreed to codify access for tribal members, but punted on a detailed plan.

Then, in March 2014, Muckleshoot General Services Director Melissa Calvert sent an email to a representative from Seattle Public Utilities, asking to camp for “2-3 days at a time in the watershed during the huckleberry season (likely around Labor Day weekend).”

It was the first time city officials had been forced to consider how much access it would or would not support. When the city finally did get back to the tribe in late August 2014, six months after the request and two weeks before the planned Labor Day weekend camping trip, Calvert received her answer: no.

The City’s reasoning was based in fear of contamination. To keep its water unfiltered, the city is required by the Department of Health to maintain strict control over entry, said Seattle’s Drinking Water Quality and Treatment Director Wylie Harper. “To lose control over access or to degrade the activities in the watershed, one possible outcome is losing” the right to keep it unfiltered. If that happened, the city could be required to build a filtration plant. “To build a filtration plant you’re talking hundreds of millions of dollars,” said Harper. 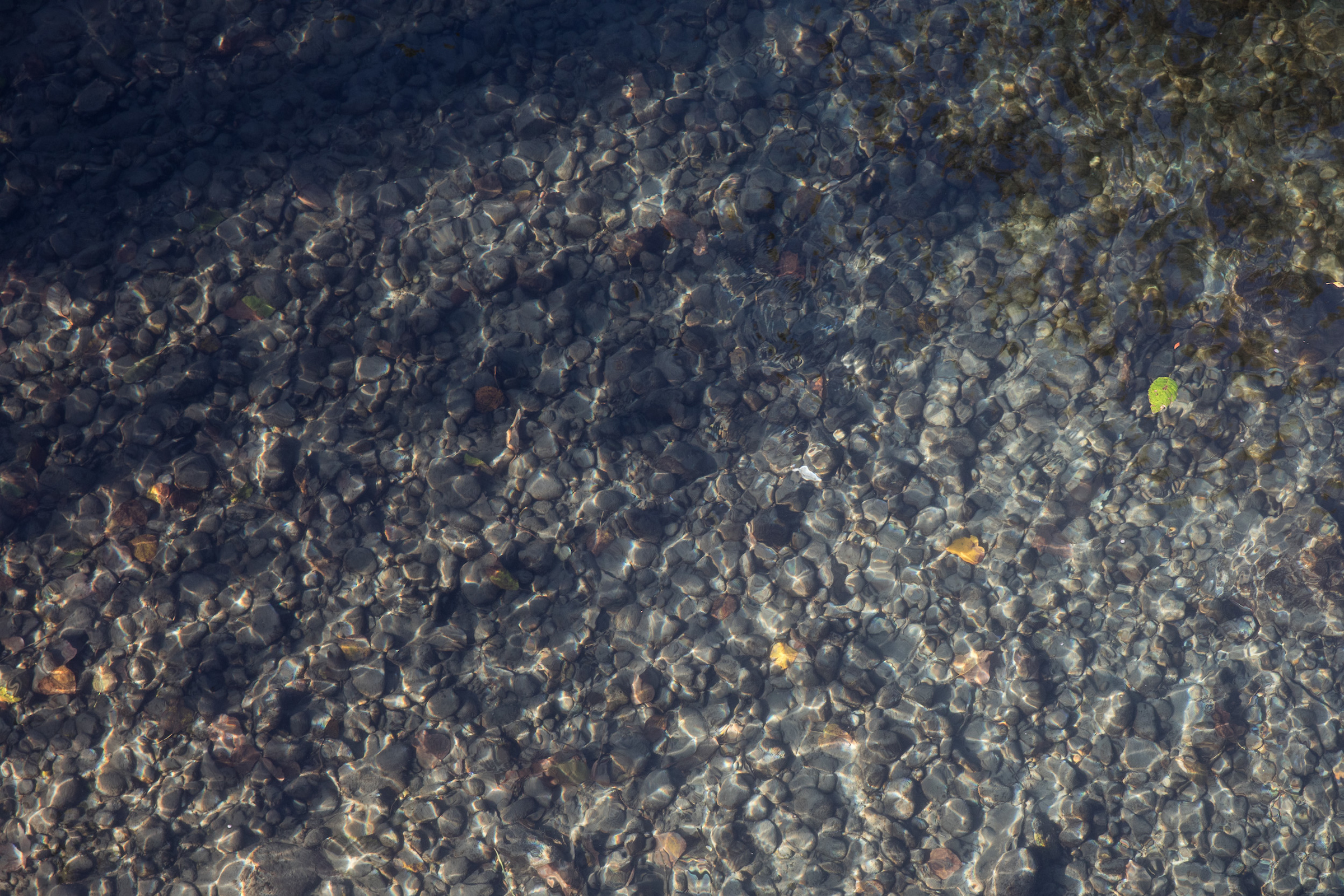 In fact, Portland is currently moving forward on a plant that will cost the city at least $500 million, spurring rate increases.

The camping requested by Calvert could qualify as the city losing control.

This was a surprise to members of the tribe, who assumed those requirements would have been factored into the settlement. “Since the Agreement has been in place since 2006, we had assumed that any issue regarding camping would have been resolved with the Department of Health prior to 2014,” wrote Vice-Chairman of the Muckleshoot Council Mike Jerry in a 2015 email. “Having the ability to camp in the Watershed is a culturally important activity for the Tribe, a way to bring together Tribal members to harvest in the traditional way.”

Also at issue is whether non-enrolled tribal members should be allowed in the watershed. The tribe says yes, as families made of both enrolled members — a status granted by the tribe through an examination of family history — and non-enrolled people are very common.

Attorney Gabe Galanda, who represents tribal governments and is not involved with the Cedar River Watershed settlement, pointed to the 1975 Boldt decision as providing the closest parallel. In that context, non-tribal family members are allowed the same fishing privileges as enrolled members.

“The idea that an individual member would access the watershed to do something like camping without his or her non-Indian spouse sort of flies in the face of real life,” he added.

But this request was also rebuffed by the city. “If the City were to agree that non-enrolled people could hunt and gather in the watershed, it would be increasingly difficult to restrict such access only to Tribal family members,” answered then-SPU director Ray Hoffman. “Therefore, this is not a modification to the settlement that we are able to accept.”

The conversations between the tribe and the city seemed to hit a low-point in mid-2016. The tribe appealed directly to then-mayor Ed Murray in June 2016, calling the city’s responses “overly restrictive” and expressing concern that “our ability to reach agreement is in doubt.”

Since then, the talks have slowed. Momentum came to a halt when Murray was accused in the spring of 2017 of sexually abusing a number of young men — accusations that eventually lead to his resignation. And after Mayor Jenny Durkan took office, she promptly recused herself from the conversations until November 2018 because she represented the tribe as a lawyer in a fact-finding inquest into the police shooting of tribal member Rene Davis.

Still, both parties appear to be approaching the discussions in good faith, said Mitchell, the vice chair of Muckleshoot Tribal Council. “Of course issues remain,” she said, but the bulk of the agreement has been moving forward positively. “The Settlement Agreement was remarkable in its scope and has been well-implemented,” she said, pointing to a “major new Sockeye hatchery” and the constant monitoring of the area’s wildlife habitat.

At the same time, the City says it recognizes the cultural significance of the land. In a statement, a representative of Seattle Public Utilities said, “While Seattle protects this pristine source of drinking water and the habitat of the Watershed, the city also recognizes the strong cultural and historical connection the Muckleshoot Indian Tribe has to this same watershed.”

But more than a decade after the celebrated agreement was signed, a cooperative plan remains elusive. The land is caught, then, between hundreds of years of tribal history and the city’s concerns about spoiling a pristine source of water. And so the watershed, for now, stays mostly silent.