Millions of dollars have poured into the “Yes” campaign, a result of the frustration generated by legislative inaction. 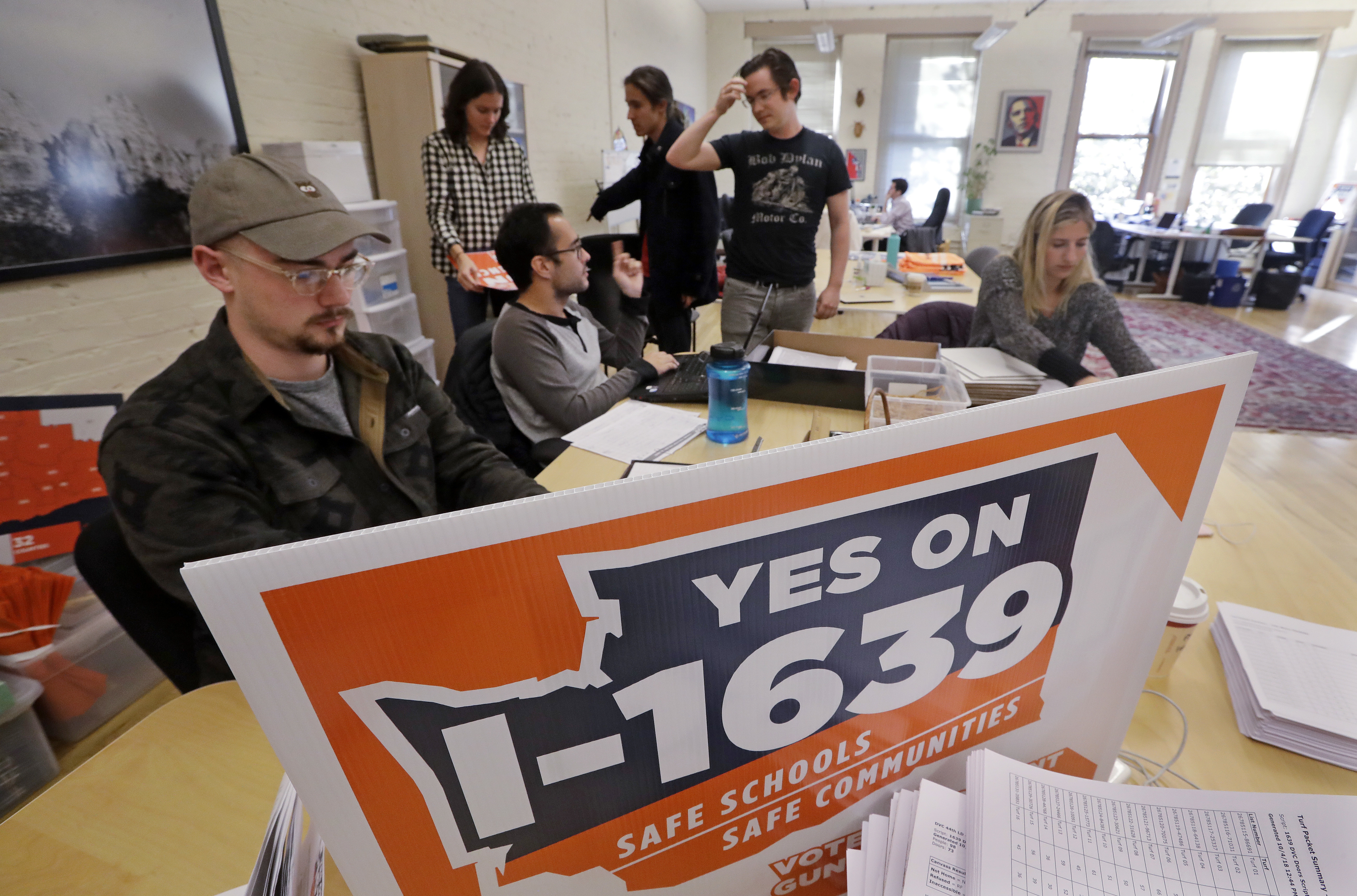 Staff members for the Yes on I-1639 campaign prepare for canvassing at their headquarters in Seattle on Thursday, Oct. 4, 2018. (AP Photo/Elaine Thompson)

When a Thurston County judge tossed Initiative 1639 last August, it looked like the proposed expansion of gun regulations would never go to the ballot. But the Washington Supreme Court overturned that ruling, allowing the measure to go forward. And now the initiative is well poised to win voter approval this November, according to a new statewide Crosscut/Elway Poll.

In a sample of 405 registered Washington voters, 59 percent said they would definitely or probably vote to approve the law. Thirty-four percent opposed the initiative and 7 percent said they were undecided. The poll’s margin of error is plus or minus 5 percent.

If approved, the measure would do a number of things. It would raise the minimum age to buy a semi-automatic firearm from 18 to 21 years old. It would also require the buyer of such a gun to pass an enhanced background check similar to the one required for handguns, take a firearms training course and then wait 10 days before purchasing the weapon.

At the point of purchase, sellers would have to give buyers a warning about the risks of guns. The state would be more aggressive in ensuring gun owners maintain eligibility to own a gun. And owners would be held more responsible for lost or stolen guns — if a weapon ended up in the hands of someone banned from owning a gun, the legal owner could be charged with a felony.

The suite of changes would constitute one of the most aggressive pieces of gun legislation in the country. Money has poured into the “Yes” campaign, a symptom of the frustration gun-safety advocates have felt with the pace of change in state and federal legislatures. Microsoft billionaire Paul Allen, who died Monday, donated over $1.3 million. Ultra-rich investor Nick Hanauer and his family have also dropped well over $1 million into the campaign. The measure has even gone national, catching the eye of former New York mayor Michael Bloomberg — his Everytown for Gun Safety PAC has given over $300,000.

In total, the Safe Schools Safe Communities committee fundraising on behalf of the measure has raised $4.6 million. This dwarfs the opposition, which has raised $316,000, almost half of which has come from the National Rifle Association.

Elway’s recent polling numbers are about in line with the final tally of a 2014 measure to expand background checks for person-to-person transfers of firearms, which passed with 59 percent. In 2016, a measure allowing family members to obtain firearm protection orders passed with 69 percent approval.

Support for initiatives often decreases as election day nears. Stuart Elway, the longtime pollster who conducted the statewide poll, has said that anything with less than 50 percent approval in pre-election data is therefore in danger. At 59 percent support, I-1639 has some cushion.

The proposed initiative comes as mass shootings have become increasingly deadly. Some of those shootings, such as the February shooting at Parkland High School in Florida that ended with the deaths of 17 students, spur activism and debate, but very few result in any change in gun policy.  Washington state has been the site of numerous recent shootings, including one that occurred at a party in Mukilteo where three teenagers were shot and killed by an assailant using a Ruger AR-556 semiautomatic rifle. Paul Kramer, whose son was wounded in the incident, has since become one of the faces of I-1639.

Dr. Frederick Rivara, who is a University of Washington professor of pediatrics and has studied youth violence, characterizes the measure is a no-brainer. “I think that we all realize that there’s not likely to be any action in Congress on guns, so that makes it really important that the states begin to tackle the problem,” he said.

The restriction on semi-automatic weapons is especially important, he said, because of their increased ability to injure or kill. He pointed to a recent article in the Journal of the American Medical Association that found shootings involving semi-automatic guns result in 80 percent more injuries and 60 percent more deaths.

Mark Williams, an Enumclaw voter who took part in the poll, has been leaning more and more conservative as he gets older, he said. The 58-year-old said he intends to vote for Republicans Dino Rossi for U.S. House and Susan Hutchison for U.S. Senate. But breaking with standard party expectations, he will vote for the initiative. “The thought that there are these people with all these weapons just blows me away,” he said.

Kelly Valberg disagrees, saying she opposes new regulation because it will take guns out of the hands of good people. “I fear that at this point, in our environment, we’re never going to be able to stop the criminal element,” said the 53-year-old Kent voter. “We can make it harder for law abiding citizens to get a gun, but the criminals aren’t going to follow that.”

For Dave Workman, senior editor at TheGunMag.com, which is owned by the Second Amendment Foundation, the 30-page initiative is bad news. “From the first to the last word in the initiative, it has a lot of problems,” he said.

His opposition is hardly surprising. But his list of issues are lengthy.

Workman is especially offended by the broad category of “semi-automatic.” “You’re talking about common .22 rifles, hunting rifles,” he said. “They would all fall within the definition of what a ‘semi-automatic assault rifle’ is.”

Ultimately, though, he believes the minimum age limit is illegal. “You’re stripping away the constitutional right of people of voting age,” he said.

He’s confident a lawsuit will percolate if the law is passed.

“I think there is a strong likelihood that it may attract a couple of different lawsuits.”