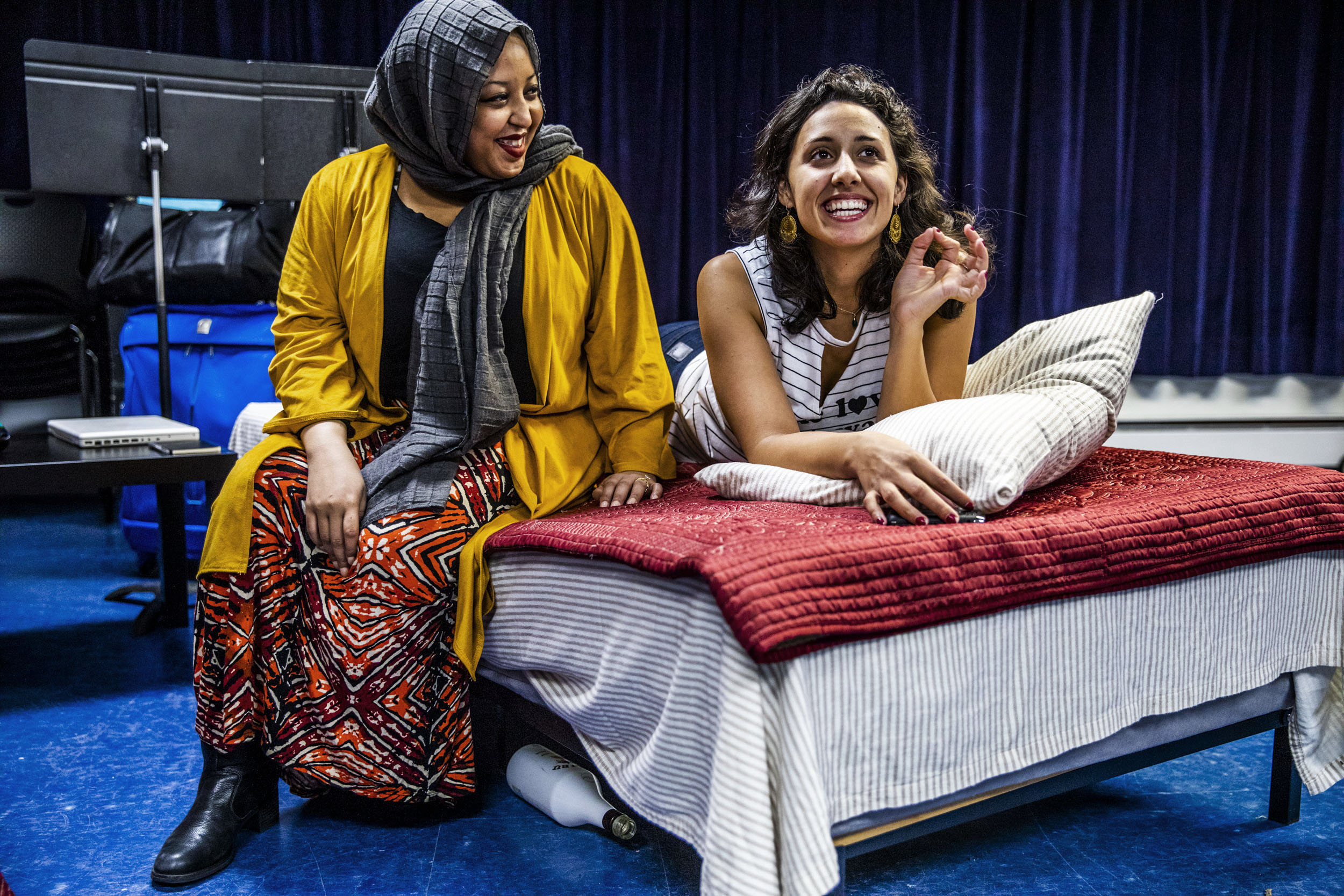 Fathiya Ritter (left) and Alaji rehearse a scene in Veils at West of Lenin in Seattle on Nov. 16, 2018. The show is directed by Lia Sima Fakhouri and will open Nov. 30. (Photo by Dorothy Edwards/Crosscut)

Whether to cover the head or entire body with a scarf or draped clothing is a crucial decision many young Muslim women around the world confront. And it can be a complicated choice, a matter of personal preference, religious devotion or familial pressure.

In the thoughtful, award-winning play Veils, an Egyptian college student and her new roommate, an African American Muslim woman on a study-abroad year in Cairo, contemplate and intensely debate the practice of veiling. They passionately hash out other differences on this and other issues related to personal identity and belief.

Set against the backdrop of the tumultuous uprising that deposed Egyptian President Hosni Mubarak in 2011, Tom Coash’s well-traveled script has been staged around the United States, in the U.K. and in the Middle East.  It is receiving its Pacific Northwest debut at Fremont’s West of Lenin at a time when we are beginning to see more Muslim and Arab protagonists, male and female, on Seattle stages.  And just this small theatrical sampling demonstrates how various and diverse the 1.5 billion Muslims who make up 22 percent of the world’s population are.

Seattle Repertory Theatre recently presented A Thousand Splendid Suns, based on a Khaled Hosseini novel about the two wives of a repressive husband in strife-torn Kabul, Afghanistan. At ACT Theatre, J.T. Rogers’ docudrama Oslo depicted the negotiations between Palestinians and Israelis that led to the Oslo Peace Accords of the 1990s.

And on the horizon in ACT’s 2019 season is the world premiere of The People of the Book by Egyptian native Yussef El Guindi. It concerns an American Iraq War veteran who returns to the U.S. with his new wife, an Iraqi woman whose life he saved during a house-to-house military raid.

While it is set in Cairo, Veils feels close to home, according to Lia Sima Fakhouri, director of Seattle’s Macha Theatre Works production and to Alaji, the local actress who goes by her first name only and who co-stars in Veils opposite Fathiya Ritter.

“It’s the first play I’d read about a Middle Eastern woman who sounded like me and felt like me and my friends,” says Fakhouri, an energetic 25-year-old Lebanese American who was born and raised in Dubai.

Alaji, who portrays the contemporary Egyptian college student Samar, concurs. “How many American plays are there with a modern young Muslim woman who is a substantial character?” says the animated performer, the daughter of an American mother and a Muslim father from Yemen. Noting that in this fall’s midterm election contests, candidates Rashida Tlaib and Ilhan Omar became the first two Muslim women elected to Congress, Alaji adds emphatically, “And it’s about time!”

“There is still so much misinformation floating out there,” says playwright El Guindi. “The dominant negative narratives about Arabs and Muslims persist.”  While fully dimensional representations of Muslim women are all too infrequent in American theater, those that do exist tend to either reinforce clichés of passively subservient wives and mothers with few ambitions of their own.

It’s been up to El Guindi and others to challenge those clichés with representations of more multifaceted characters with contemporary worldviews and ambitions.  What Veils does so well, says Fakhouri, “is break down stereotypes.”

For one thing, the African American student Intisar (played by Ritter) is the more studious, devoutly religious of the two characters and the one who covers her hair with a hijab, or head scarf. Alaji’s feminist, outspoken Samar rejects such traditions and wears Western-style fashions — jeans, high heels — common on any U.S. college campus. Samar hopes to become a political journalist and help make Egypt a more democratic nation with full autonomy for women.

Veils imagines how the students’ two conflicting views are bridged by a slowly developing friendship that gathers mutual understanding and respect. “These characters go through so many passages of deep conversation,” reflects Alaji, “and this is a story about how they become sisters. As the world around them seems to be crumbling, they become strong.”

Social media plays an important role in the process. “They get excited about doing a blog together, where others can join in to give opinions on veiling,” notes Fakhouri.  The play also mirrors how the rapid-fire communication tool of the Internet assumed a critical role in organizing the massive protests that toppled Mubarak’s regime. The anti-Mubarak demonstrations attended by tens of thousands Egyptians in Cairo’s Tahrir Square were largely instigated and reported via cellphone and other digital devices by tech-savvy young people.

“I want to transport our audience to Egypt and immerse them in the events and the culture,” says Fakhouri, whose father did a stint as CEO of a Cairo hospital. “We’re using some of the cellphone footage people took during the uprising, and images from documentary films. We’ve crafted these beautiful transitional moments that help us be in that world a little more.”

Those involved in the Macha Theatre Works production have also been reaching out to the Muslim Association of Puget Sound and other Seattle-area Muslim groups to stimulate attendance and discussion. (In a 2010 estimate, there were about 12,300 residents of Muslim faith in King County.)

Fakhouri, like many of Lebanese heritage, was raised Christian. She considers herself lucky to have found two Seattle actors in their 20s with pertinent Muslim backgrounds to cast in Veils. Ritter grew up Muslim in Georgia, wearing a hijab. And Alaji is drawing on her own experience spending time in Jordan with her father, his second wife and her brothers. “They are a very, very religious family,” she says, “but never forced me to be.  Like Samar, I've had choices, and like her I’ve chosen not to wear the veil.”

Is it surprising a white, male, non-Muslim American like Coash, a New Haven, Connecticut-based theater artist, would write numerous plays set in the Middle East?  And conjure a cross-cultural script about Muslim women, which, according to one drama critic, “reminds us of the importance of seeing and understanding the people behind those all-too-often condemning generalizations”?

Recalls Fakhouri, “In my third email to Tom I bluntly asked him, how did you write this so well as a white man? He said he’d lived in Egypt and taught at the American University in Cairo for several years.  He said he knew these women. And I could tell that a lot of young Middle Eastern voices have touched this script, and shaped it.”

That may be why Veils avoids taking sides or attempting to resolve the pivotal debate Samar and Intisar engage in. In the end, the Egyptian woman reaches a point where she tells her American counterpart, “I hope that I am never forced to wear [the veil]…and that you are never forced to take it off.”