As City Arts shutters, local artists are wondering where they stand in new Seattle. 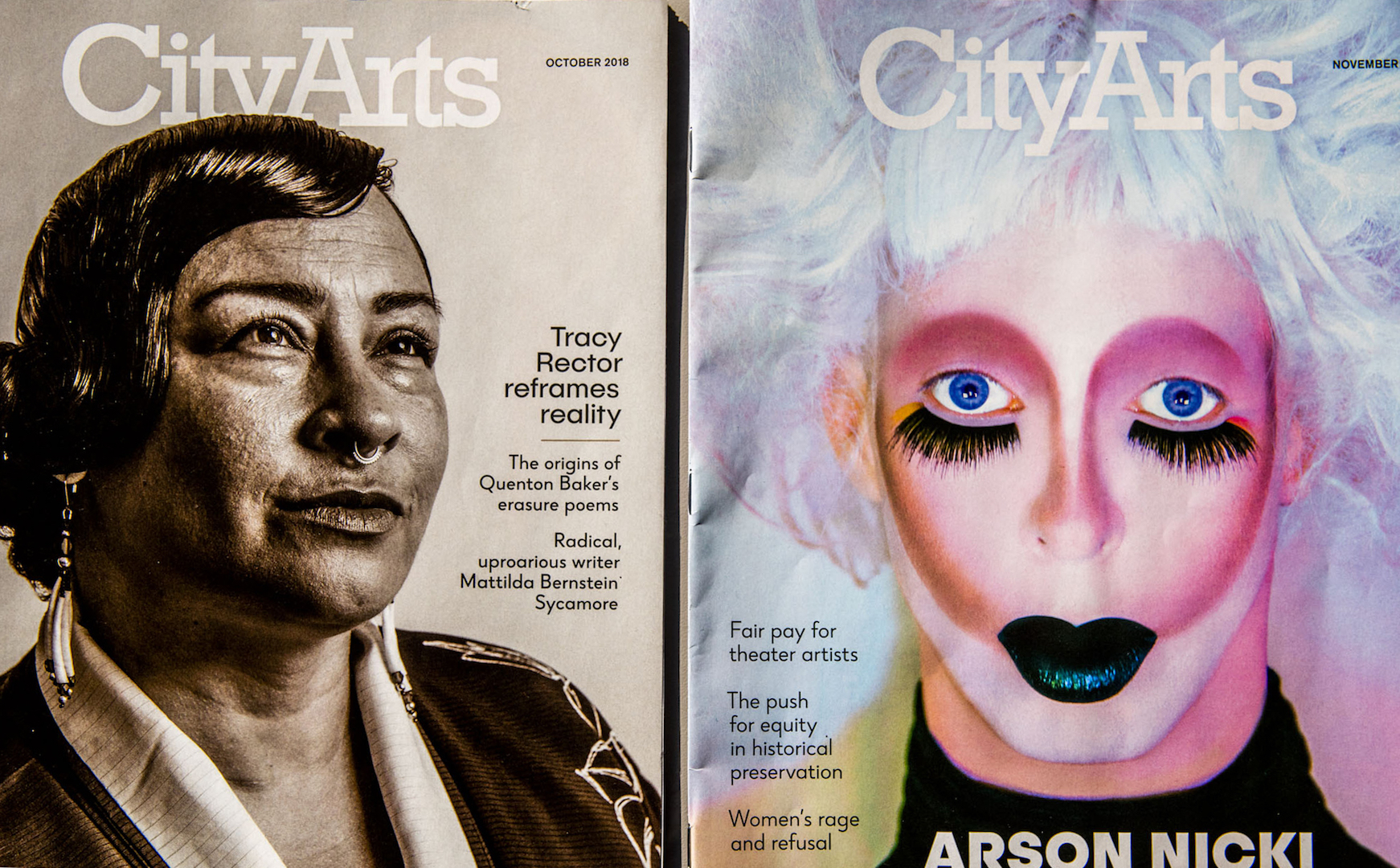 The October and November issues of City Arts magazine, which announced it will cease publication after 12 years. (Photo by Dorothy Edwards/Crosscut)

The November issue of City Arts magazine features a striking cover image: a close-up of Arson Nicki, the local performance artist who rejects typical drag attire in favor of a more unconventional look, like something out of a dystopian space opera. Also on the cover are several headlines — “Fair pay for theater artists,” “The push for equity in historical preservation,” “Women’s rage and refusal” — touting stories that, along with the featured artist, serve as a microcosm of the magazine’s mission to showcase diverse, risk-taking artists and the issues they face in Seattle.

After 12 years of publication, this is the final issue.

On Thursday, City Arts sent a press release announcing, “As of today, we are ceasing publication and letting go of our staff.” Encore Media Group had published the monthly arts and culture magazine until this past June, when City Arts became independent and began working toward a new funding model.

“When we left Encore in June, we knew we faced a stiff wind,” said publisher and CEO Andy Fife by phone. City Arts initially raised about $60,000 with an Indiegogo membership campaign and hoped to raise the bulk of overhead expenses via investors. But “the investors came in slower and in smaller amounts than we’d hoped,” Fife said. Letting out a sigh, he added, “I’ve left jobs before but I’ve never left something that was so symbolic of this city.”

While he hesitated to blame the demise of Seattle’s monthly arts magazine on an “unfixable problem” with the city, he noted, “This isn’t the first time I’ve seen innovative, nontraditional arts endeavors here have trouble finding financial support from a community that traditionally supports the arts.”

Editor-in-chief Leah Baltus pointed out that Seattleites understand the essential role arts play in civic life, and even appreciate the coverage. But she emphasized, “It isn’t free. It costs money.” She recalled something activist/writer Ijeoma Oluo said in an interview featured in the July 2018 issue: “Seattle likes to think its art just magically gets done. Like we’re elves in this workshop putting out this art for them.” Said Baltus: “The same goes for those of us who prop up those artists.”

City Arts is especially known for championing local artists who don’t fit into conventional arts boxes. “One thing we accomplished was giving ink to the voices of artists who often get omitted or erased from coverage,” Fife said. He worried that those voices might be silenced with the closure of the magazine. “It’s not just that those artists are losing exposure — it was real estate that was committed to social change. In this city, at this moment, that’s a substantial loss.”

Visual artist Ryan Feddersen, whose work toward keeping Native American storytelling alive was featured in City Arts, said the magazine’s closure has her concerned that “community access to culture could suffer as a result.” City Arts was always free, its glossy, eye-catching issues stacked up in coffee shops and other public venues. “We need magazines like this in our community that have equitable distribution,” Feddersen said, “providing access to what’s happening in the arts to a broad group of people.”

Theater artist Sara Porkalob (who was first featured on the magazine’s “Future List,” then later on its cover) shared Feddersen’s concerns. “People think print is out of date,” she said. “But there’s something special about the consistency and visibility of a monthly, print magazine. And the fact that it was free made it accessible, and drove different demographics to become aware of these artists.”

Porkalob also lamented the overall decrease in Seattle’s arts coverage — a refrain shared by many local artists on social media when word of the City Arts closure dropped. “The Seattle Times, The Stranger, the Seattle Weekly — it seems like arts-writing funding is getting cut everywhere, which is indicative of how arts is viewed as a nation,” Porkalob said. She believes arts journalism is important not just for the artists who benefit from it, but as a record of civic history, “a documentation of the diverse and varied arts scene here.”

Anastacia-Reneé, Seattle’s Civic Poet, graced the July 2017 City Arts cover wearing only the gold text painted on her body. She said she appreciated the ways the magazine took risks, both on its covers and with its content. “Especially during the current administration, I feel like the mag did a push to celebrate and honor more diverse voices in terms of race ethnicity, class, gender, sexuality — and that really means a lot to me," she said. “I also appreciate the way City Arts introduced Seattle audiences to artists they’ve never heard of before, highlighting them in ways that weren’t comparing, but just uplifting, saying, ‘Hey, you should know about this person.’”

One of those people was singer/songwriter Tomo Nakayama, who was featured on the cover of the January 2010 issue with his band Grand Hallway, and as a solo artist on the cover in December 2013. “I owe my career in a lot of ways to these two magazine covers,” Nakayama wrote on Facebook. “Thank you City Arts Magazine for shining a light on so many of us in the Seattle arts community for the past decade. I especially appreciated the effort you made to feature women and minorities in your features.”

According to Fife, “Our mission is even more important today than it was yesterday.” But in terms of what’s next for the staff and regular readers, it’s unclear. The press release stated the magazine might "forge a new chapter as a scaled-back digital platform or in some other format.” But Fife didn't have any details to share. “We need to close out this chapter first — to honor what it’s been.”

Baltus too said she hoped readers and her dedicated, tight-knit staff wouldn’t let disappointment overshadow a “giant swell of pride that [the magazine] ever happened.” She also wondered if the news might spark other Seattle publications to renew their commitment to arts coverage.

Meanwhile, as she went “through a box of Kleenex,” she found joy in the exuberant boldness of the final City Arts cover. “We’re pretty psyched to be going out with Arson Nicki,” Baltus said, laughing amid tears. “When funding started looking doubtful, we just decided to go for broke.”