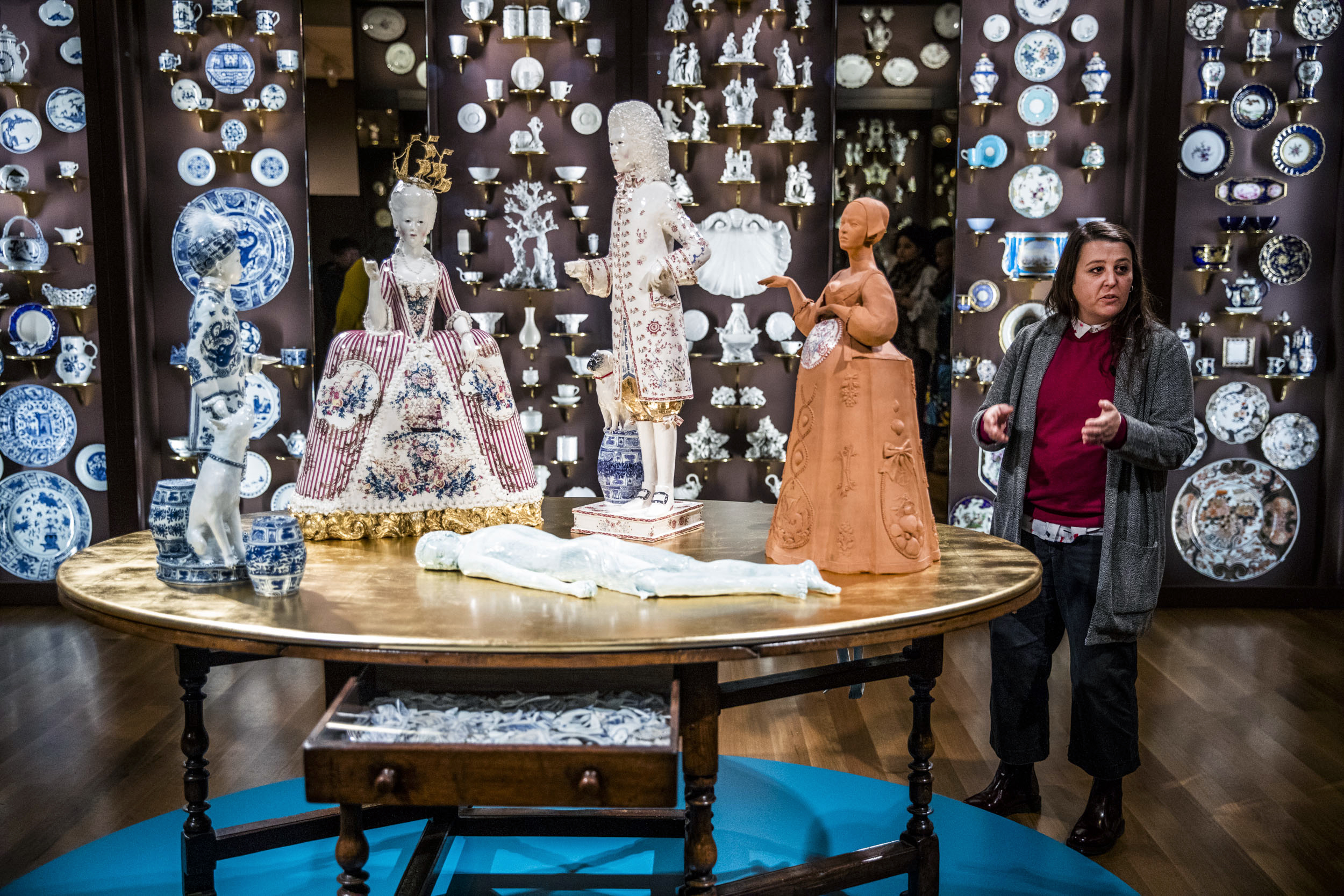 Claire Partington discusses her ceramic installation ‘Taking Tea’ in the Seattle Art Museum on Wednesday, Dec. 5, 2018. The exhibit will be on display in the Porcelain Room through 2020. (Photo by Dorothy Edwards/Crosscut)

A jewel box gallery featuring more than 1,000 glinting treasures from Europe and Asia, the Porcelain Room at Seattle Art Museum has been sitting very still since it opened in 2007. The chocolate-brown walls of the small, quiet room are lined floor to ceiling with cups, plates and decorative items from the 17th and 18th centuries. Walking inside is a bit like seeing Snow White asleep in her glass coffin — all that alabaster beauty so close, yet untouchable. The space invites solitary meditation. But this week it’s getting an “intervention” that aims to amp up the conversation.

In its original incarnation, the Porcelain Room was more about the housewares people used (or coveted) than the humans themselves. That, and the fact that the collection is encased in glass, gave it a sense of remove. Now, smack in the middle of the room — unprotected except by a guard at the door — stand six ceramic people in old-fashioned dress, positioned as if having tea. Suddenly, our focus is shifted to the figures, who don’t have any teacups in hand, but seem to get their pick of the room. These party-crashers might just change the space forever.

This first-ever installation in the Porcelain Room is “Taking Tea,” created by London-based artist Claire Partington. A multimedia ceramicist who uses a variety of styles to comment on issues of power and status, Partington became interested in the history of the porcelain trade, and the dark underbelly of these pretty and popular pieces. She says that during the 17th and early 18th century, the porcelain business ramped up at a dizzying pace.

“The demand for porcelain was fueled by the craze for tea,” she explains. (Coffee was the caffeinated beverage of choice through the 1600s, before the so-called “China drink” caught on.) Fancy tea sets became a symbol of success. The fad was so fervent it led to an increase in shipping routes to and from Asia, which meant more laborers — and more shipwrecks. “People were forced into being sailors,” Partington says, and “many lives were lost at sea,” due to dangerous conditions and Portuguese, Dutch and English competitors sinking each other’s ships.

Porcelain shipments went down in the watery depths, too, and due to the remarkable strength of the material, many shards still exist — a few of which Partington displays on panel in the Porcelain Room. “I sourced the panel on eBay,” she says, slightly amused. (Apparently divers have made “quite a business of it,” she adds.)

Facing the wall of porcelain shards, some of which are still encrusted with crustaceans, is the household of four having tea. The coil-built figures, about 30-inches tall, are posed on a life-size dining table that serves as a sort of parlor room. The boy, which Partington says is the family's “prized possession,” is dressed in the most luxurious style — that of Chinese Wan Li porcelain. The man of the house sports an elaborate nobleman’s wig, a fancy frock coat and gold britches. Next to him, striking an “I’m a little teapot” pose, is the maid, made from simple red stoneware (as was first used in the Chinese teapot trade). Notably, she has a baby bump, adorned with the same fabric pattern worn by the man.

The woman of the house is decked out in high fashion, her dress boasting wide panniers to advertise how much silk she can afford. As a contemporary wink, the red-and-white striped pattern is dotted with Gucci and Chanel logos. On her head, a fascinator resembling a galleon adds a touch of the ridiculous, and calls attention to an essential aspect of the scene — two shipwrecked sailors, casualties of the fever for porcelain, who lie dead or clinging to life at the family’s feet.

Cast in celadon glaze, one sailor is tattooed with a kraken attacking a ship (a few tentacle-sucker marks scar his leg), the other, who is trying to heave himself up onto the table, is inscribed with a shipwreck passage from Lord Byron’s “Don Juan.” The household, joined by their exotic dogs, doesn’t notice either of the sodden sailors. Their eyes are glazed over.

“You can’t help but look at all the cases when you’re looking at the table,” Partington says of the arrangement. The tall vertical mirrors around the room seem to multiply the already plentiful porcelain treasures. Such luxury comes at great cost, Partington implies.

The work — which will be on view for two years — brings a powerful, thought-provoking jolt to the Porcelain Room.

Claire Partington: Taking Tea is on display in the Porcelain Room at Seattle Art Museum through 2020. Over the course of its run, the exhibit will be activated with sound, scent and music installations curated by Seattle’s Erika Massaquoi.

Guest curator Erika Massaquoi, who SAM tasked with choosing an “intervention” for the room, has a special connection with the space. She says when she first moved to Seattle, “I would come here every day.” It was as a calm place where she could regroup and feel comforted by the collection, some of which reminded her of pieces owned by her grandmother, a former domestic worker who had been gifted special housewares by her employer.

But she also says it’s been a place where you can have a lovely experience “and not think much deeper about the contents.” Massaquoi chose Partington specifically because she uses ceramics to create an “intercultural discourse” about social issues past and present. She says when the two first started having conversations two years ago, they were contextualizing the porcelain collection in contemporary concerns. “We were talking about trade, globalization, economies, immigrant lives lost at sea,” Massaquoi says.

Now when people walk into the room, they’ll make an immediate connection with the human figures displayed. “People will think, ‘Oh my god, she’s pregnant,’” Massaquoi says, referring to the maid, which brings all the associated class and race issues to the fore.

In previous ceramic pieces, Partington has portrayed urbanites wearing pricey sneakers and brandishing designer dogs on gold leashes. (“I’m especially interested in [people] using an animal as a status symbol,” she says.) She calls the current market of commercial goods “an unstoppable juggernaut of production.”

And unless you’re a very careful shopper, she says, “Most of us don’t think about where luxury items come from.” Or at what price.