What if Alaska's earthquake happened here?

Harold Tobin, director of the Pacific Northwest Seismic Network, lives on the front lines of our region's tectonic madness. He shares what Anchorage's quake means for our region, and what keeps him up at night. 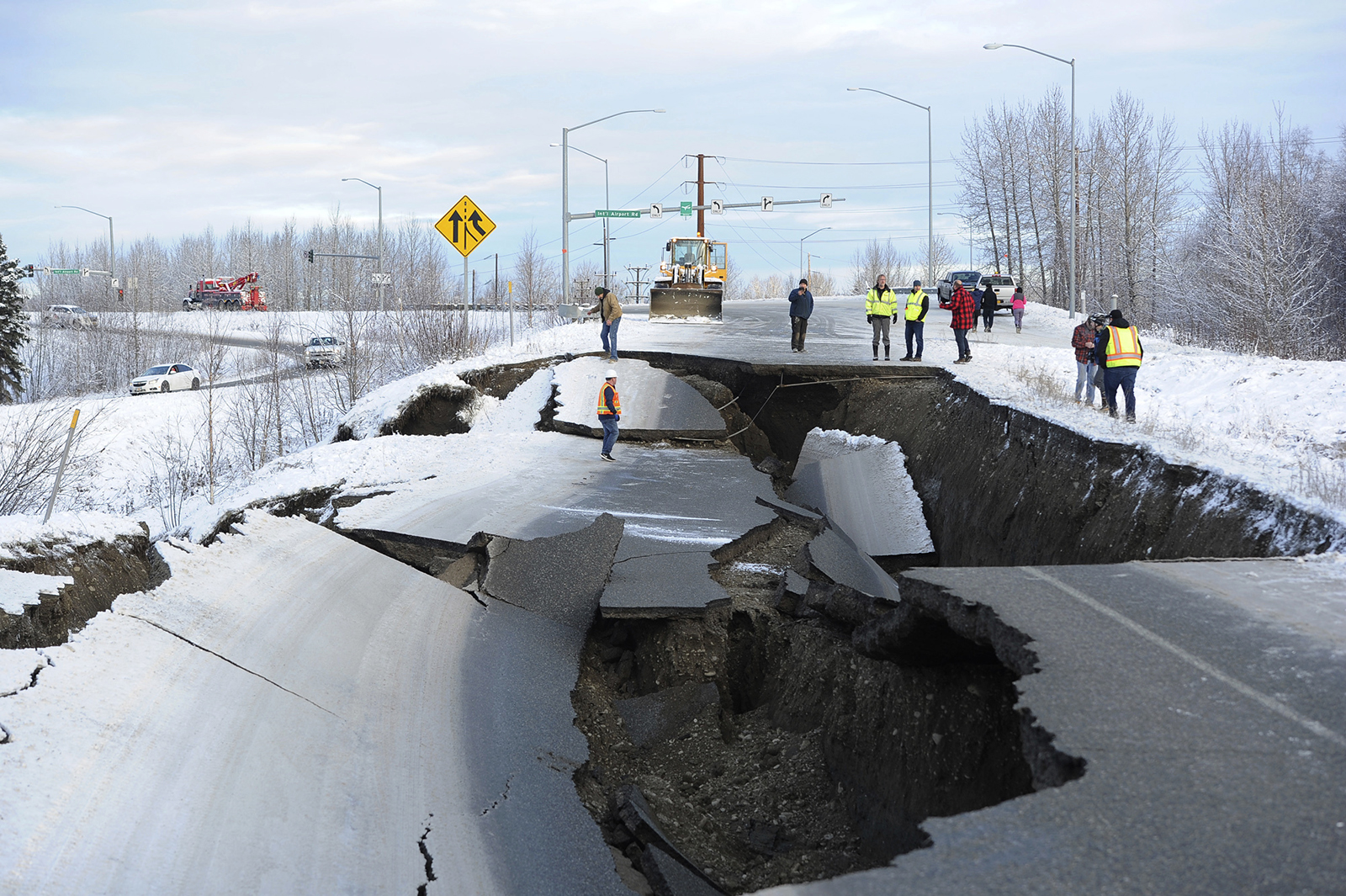 Last Friday, a 7.0 earthquake rattled Anchorage, Alaska. Amazingly, no one died — and revamped building codes enacted in the wake of the state’s deadly 1964 Good Friday quake meant the city was more prepared than most. Outside of a few structure fires, damage was kept to a minimum.

But striking images of tectonic apocalypse filled the news just the same: offices avalanched with fallen papers; grocery stores cluttered with spilled merchandise; roads cracked and uplifted like broken icing on a birthday cake, complete with cars stranded on cracked chunks like toys.

In his capacity as the director of the Pacific Northwest Seismic Network (PNSN) and as a geosciences professor at the University of Washington, earthquakes are Dr. Harold Tobin’s profession. But he took the news personally.

“The first I heard was when I got a text from my sister who lives in Anchorage that just said, ‘EARTHQUAKE,” he says. “I’m like,  ‘Where are you?’ and she says, ‘I’m underneath my desk at work.’ So she felt it pretty strongly.”

Thanks to the long aftershocks of “The Really Big One,” many Seattleites’ second thought might’ve been imagining those crumbled roads mapped to the Queen Anne counterbalance or picturing their own cars suspended on a teetering section of the Aurora Bridge.

Don’t panic just yet. The PNSN has over 330 sensors permanently installed throughout Washington and Oregon, inside buildings and on mountaintops (the highest is at Mount Rainier’s Camp Muir). They have plans to deploy about 200 more in partnership with the U.S. Geological Survey to help develop the ShakeAlert early warning system, currently in pilot phase.

Tobin talked with Crosscut to put the Anchorage earthquake into context, gently speculate what a similar quake would do to our fair city and explain why he can — and most folks in the Pacific Northwest should — sleep well at night.

How does the earthquake early warning system work? How much time would we have to prepare?

When an earthquake happens in a particular spot, it’s like ripples in a pond: The first waves — p-waves — are fast but not strong-shaking. They’re followed by s-waves, which are the really damaging waves. At every stage we can detect the p-wave and determine if it’s a big wave or a small one. The distance between the earthquake epicenter and the particular location you want to give a warning to determines how much time we have. If an earthquake happened right under our feet, there wouldn’t be any time — there’s a blind zone.

On the other hand, if it’s the big one from the Cascadian Subduction Zone, we could have 20 to 40 seconds of warning time in between us and the coast. It depends on aspects of the earthquake — whether it starts in the south or north, etc. When they’re really big, they spread over a certain length of the fault and we could have up to a minute. We have the capability now to detect it and with only a few seconds of delay have computer algorithms issue that ShakeAlert warning [within] the first couple seconds.

Anchorage seemed to weather the quake pretty well, despite being a pretty large one. Why is that?

I quickly got the alert from the seismic network up there and it was a 6.7. They refined it to right around 7. That's a significant size, almost directly beneath Anchorage. But the data showed that it was a little deeper, 25 miles down, [which] decreases the strength of shaking. And the city was reasonably well prepared. Because they’ve been through a really big one, they have strong building codes. I would not want to have an equivalent event here.

The damage comes to brick or masonry, what we call URM — unreinforced masonry. Our region still has a lot of buildings that haven’t been adequately retrofitted. They have heavy façades, they’re very brittle. Those are the dangerous buildings, unfortunately. Over time they get reinforced and replaced. But they’ve already been through that in Anchorage, and it's a smaller city. Parts of our region will shake pretty hard.

We have evidence that when the big one happens, we have these deep sedimentary regions in Puget Sound, and that’s going to amplify that. Tall high-rises and freeway areas are not ready for the big ones at all. There will be greater damage to the most densely populated parts of the state. I'm a little more worried about the taller buildings.

Anchorage is over 2,000 miles away — much farther than Los Angeles or San Francisco — and yet for plenty of reasons we feel connected.

Well, the plate tectonic environment [near Anchorage] is very similar to here: The Pacific Ocean floor is sliding northwards, just as for us the Pacific Ocean floor in the Juan de Fuca plate is sliding. They share the same risk of the big ones, the subduction earthquakes, above or, for that matter, below. The lesson we can take is if you look at the 1964 earthquake in Anchorage, that was the last magnitude 9.0. We think that was about the size that hit us back in 1700.

It almost feels like we're next. Is there anything you can say to make us feel better?

As far as feeling better, the article in The New Yorker is great for raising awareness, but acting as if destruction is total is not accurate. In even severe earthquakes, many buildings fall down; most do not. The place to worry most is the tsunami zone: People in the tsunami zone need to have their plans clearly made. But there is some luck in that the tsunami takes a little time.

Here in Seattle, we would see disruption and damage, but the vast majority of people would get through it OK. Make sure your family has a plan; if you find yourself in different places, make sure you know where you would go back to; build an emergency earthquake kit. You’re more likely to be personally fine — just highly inconvenienced. ...The bottom line is we would see a patchy distribution in damage. It's not that everything west of I-5 is toast. That’s the wrong impression.

When that story came out, there wasn’t anything really new in it. It was a great article, a little overblown or overly scary, but the net positive is that the region is very aware in a way that didn’t happen before.

You just moved here this fall from Wisconsin. Are you excited or terrified to be in the epicenter of all that you study?

I’ve been doing subduction and fault mechanics for a while, so I’m excited to be here for that very reason. It’s the act of plate tectonics that makes this place a beautiful region. We wouldn’t have mountains, or the Sound, or the shape of the place without it. The magma feeds the volcanoes. The Olympics and the Cascades wouldn’t be there without the earthquakes that push them up one earthquake by one earthquake. The Midwest, for all its virtues, is pretty flat, and tectonics are pretty far away.

So it sounds like you sleep OK at night.

I sleep OK, but I always have. But knowing what I know, I did move here, after all. Earthquakes by themselves are not particularly scary — it's what can fall on your head. If you’re out in a field, it’s not particularly dangerous at all.

I was in grad school during the Loma Prieta quake, and we were right on top of it in Santa Cruz. It caused damage and a loss of life; I never want to minimize casualties. But the vast majority of people had just a story to tell. I’ve seen here that some people are very scared and that’s not a surprising response. But I want to reassure them that earthquakes are just one of many natural hazards. It’s a part of life. 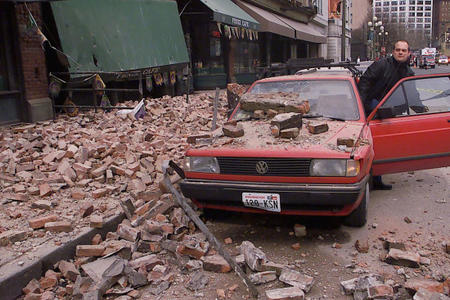