Mayor Durkan negotiated with downtown property owners who threatened to block the tax. 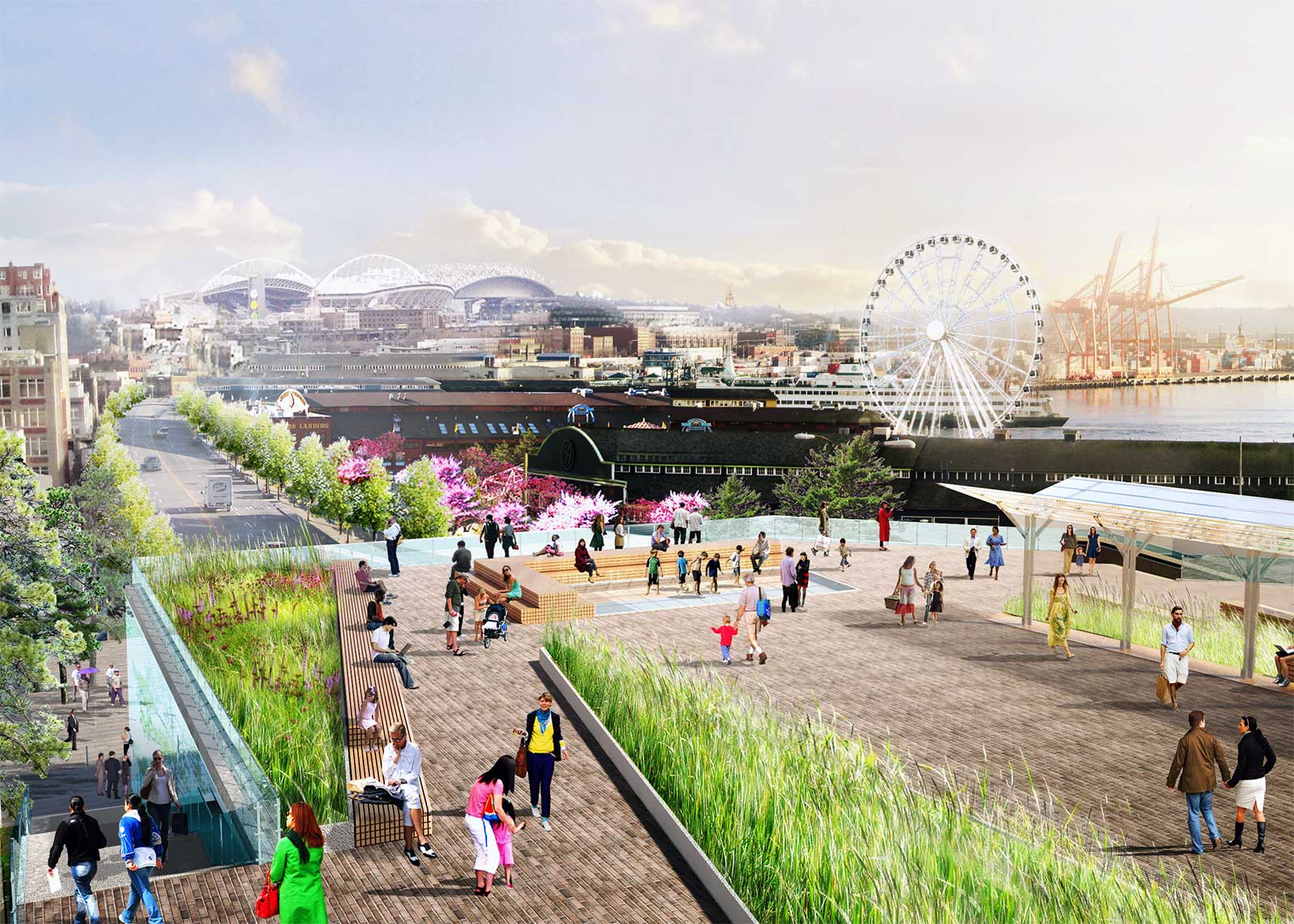 A rendering of the bay steps at the end of the Overlook Walk. (Courtesy of City of Seattle Office of the Waterfront)

Visions of a grand new downtown waterfront for Seattle moved one significant step closer to reality Thursday after Mayor Jenny Durkan announced that the city had quelled threats of obstruction from downtown property owners.

By reducing a proposed tax on downtown residents and businesses from $200 million over the next 20-years to $160 million, enough property owners have agreed to not formally challenge the tax. That means, pending city council approval, the project should have enough funding to move forward.

Plans for a new waterfront park have been in the works for more than a decade, part of the city’s plan for tearing down the aging viaduct and connecting city center businesses to the walkway that stretches along Elliott Bay.

The final piece of funding to make that happen had been in doubt, however, as downtown property owners threatened to challenge a proposed tax. The tax was aimed at those who are likely to see a bump in property value from the construction of the new park — namely those within walking distance of the water. If those property owners were successful in blocking the tax, the project would lose more than a quarter of its funding — or about $200 million.

To avert catastrophe, Durkan’s team entered into negotiations with property owners over the fall. In a press conference Thursday at the Seattle Aquarium, she declared victory.

“Every one of you is at the equivalent of the groundbreaking for the Space Needle,” said Durkan. “This is a time in Seattle’s history when we are remaking the city in a way that people cannot even begin to fathom. But when it is done, they will be amazed.”

The $160 million over the next 20 years will fund a 20-acre park, a new Alaskan Way, a walkway connecting Pike Place Market to the waterfront and a number of other waterfront features. The concept was designed by James Corner, the famed landscape architect best known for New York City's Highline Park. Durkan drew a parallel to San Francisco’s Embarcadero, which also once had a viaduct, but is now a flourishing waterside walk.

The $40 million reduction from the original proposed tax would be made up by increased revenue from an existing commercial parking tax.

The average downtown condo owner would pay about $100 a year and the average commercial owner about $300 a year, according to the city. The rest of the estimated $712 million necessary to complete the project would come from state and city taxes, as well as private philanthropy.

Durkan said Thursday the city had secured, in writing, guarantees from a critical mass of downtown property owners that they would not use formal processes to halt the new tax.

The proposal now goes to the Seattle City Council for approval. Durkan said she was confident it could get approved without significant changes that could jeopardize the agreement with the downtown owners.

The state authorizes the city to use such a location-specific tax because those within its boundaries would see an increase in value once the viaduct is gone and the park completed.

Despite the decreased size of the total tax, Durkan said the scope of the project will not change. What’s lost from the tax will be made up for with city funding, which Durkan said would come from a rosier forecast for the city’s commercial parking tax.

Portions of the waterfront redesign have already begun, including rebuilding piers 62 and 63. The remainder of the project is scheduled to begin in coming years and is set to be completed by early- to mid-2023.

The timing of the deal is key to the mayor and the city as the viaduct will close for good next week. Its teardown begins in early February — a months-long effort that Durkan said would make the city “gasp” as the air around the waterfront opened up. In securing an agreement with downtown property owners, Durkan can now speak with near certainty about the waterfront’s future postteardown.

Bob Donegan, owner of Ivar’s, said Thursday that he was pleased with the deal. He estimated his waterfront restaurant would have to increase revenue by about $31,000 a year to cover the cost of the new tax. “We will easily do that when the visitors to the waterfront double or triple,” he said.