How do you actually make the rich pay more? 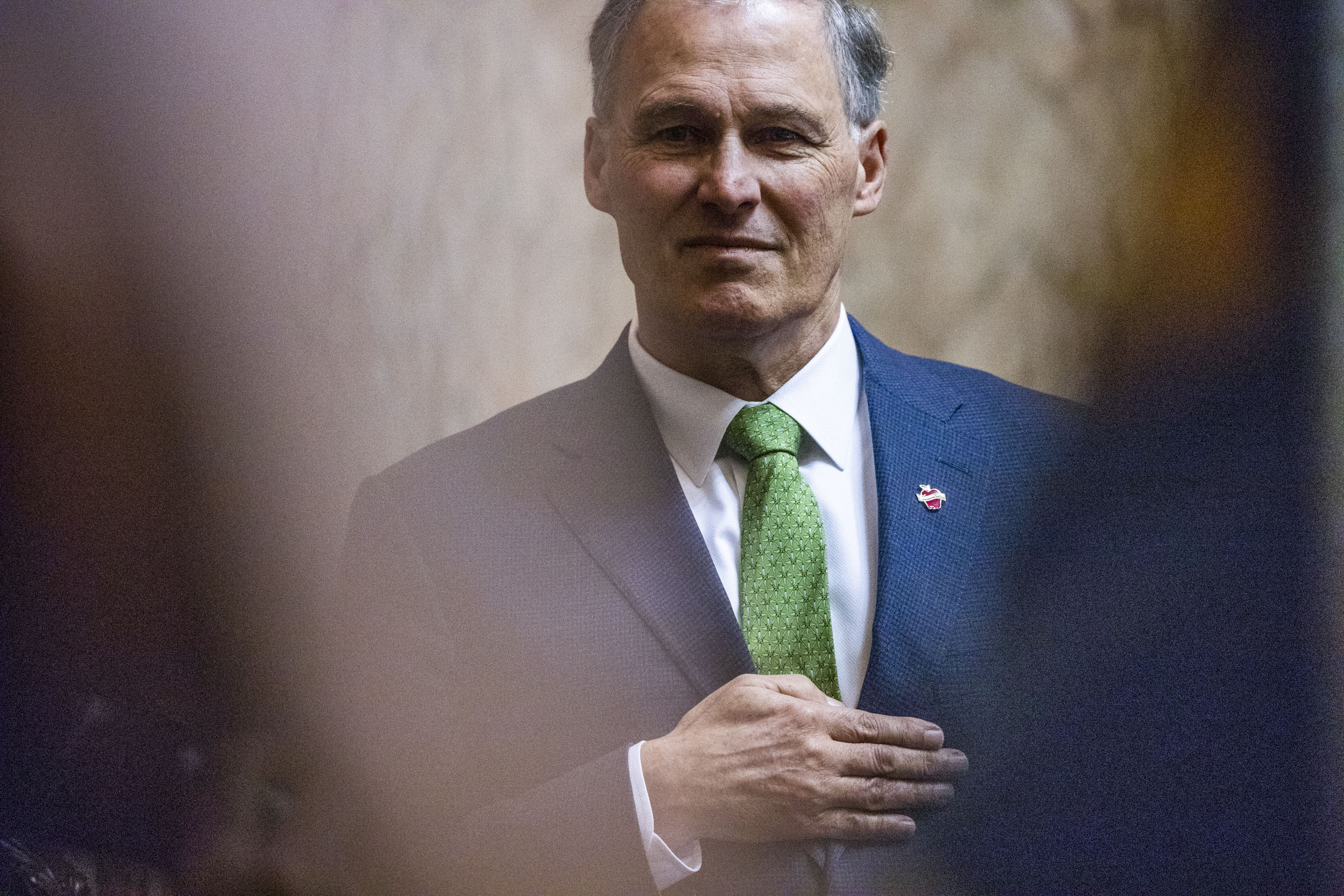 Washington Gov. Jay Inslee delivers the State of the State address in Olympia on Jan. 15, 2019. (Photo by Dorothy Edwards/Crosscut)

We already know what Democrats are against: Donald Trump. And not just at the federal level. When Seattle City Council members were trying to sell a tax increase in 2017, they argued it would “Trump proof” Seattle. State legislators invoked his name both in Olympia and on the fall campaign trail. Voters gave them their biggest majorities in a decade.

But beyond opposing Trump, what do the Democrats actually want to do?

Again, this is happening at all levels. In 2017, the Seattle City Council — unanimously — passed an ill-fated city income tax, arguing that Seattle’s that wealthy people needed to pay more.

In Olympia, a number of legislators, mostly from the Seattle area, have signed on to a letter asking the state Supreme Court to strike down judicial precedent (and the plain wording of the state’s constitution) to make a state income tax legally valid. Gov. Jay Inslee was on CNN Monday selling the creation of his proposed state tax on investment income (the capital gains tax). Even with healthy surpluses of cash rolling in, and polls running against both taxes, they are still driving to make the wealthy pay more.

And then, Congress. Massachusetts Sen. Elizabeth Warren is basing her campaign for president on a wealth tax, which targets the assets of people worth $50 million or more (a situation I would love to be in). Rep. Alexandria Ocasio-Cortez of New York is pushing an income tax of 70 percent on every dollar people earn above $10 million. Freshman Democrat Rep. Ilhan Omar said why stop there: “So 70 percent, 80 percent, we’ve had it as high as 90 percent. So that’s a place we can start.”

All of these ideas at city, state and federal levels are sold as cures for income inequality, but most of them don’t lower taxes on the poor. They simply hit the rich. Lisa Herbold, deservedly endangered city council incumbent from West Seattle, justified a city income tax by arguing in The Seattle Times, “We will also be able to lower income and property taxes to help alleviate the cost of living for everyone else.” But the city income tax actually wouldn’t have done anything for the poor. Neither does the capital gains tax in Olympia. It’s all about collecting more money for more government.

But what does “pay more” really mean?

Do they want to raise tax rates on the wealthy? Do they want the rich to pay a larger share of the nation’s tax bill? You would assume that the former leads to the latter.  But a closer look at our economic history, using data and information from the Tax Foundation, shows that the rich paid less of the nation’s tax bill when the rates were higher.

Starting halfway through Franklin Delano Roosevelt’s presidency, and escalating in the run-up to World War II, the top marginal income tax rate surpassed 90 percent and stayed there through the Eisenhower administration. But hardly anyone (usually fewer than 20 people nationally) actually paid that rate. The reason: deductions, credits, deferrals, etc. John F. Kennedy’s administration cut income tax rates for everyone, including a cut in the top rate from 91 percent to 70 percent. It stayed there through the end of 1980, the final year of the Jimmy Carter administration.

At that point, the wealthiest 1 percent earned about 12 percent of the nation’s income, and paid about 19 percent of America’s income taxes.

Then came the Economic Recovery Tax Act of 1981. Income tax rates were cut across the board, with the top rate tumbling from 70 percent to 50 percent.  In 1986 came the bipartisan Tax Reform Act, which brought the top rate all the way down to 28 percent — in return for closing loopholes, simplifying the system, and taking millions of low income folks off the tax rolls. It passed the Senate 97-3.

By 1990 the richest 1 percent paid 25 percent of the nation’s income taxes.

By 2007, the richest 1 percent were paying more than 40 percent of the nation’s income tax bill. The recession brought those numbers down, but they rebounded with the stock market.

So what would the Democrats like to do: Focus on more revenue, or emphasize higher rates?

It’s tempting to say: “Raise rates and lower deductions,” but that isn’t likely. One particularly popular tax dodge is tax exempt municipal bonds. But ask any big city mayor — who have a lot of political clout with their members of Congress — if he or she would support ending the tax exemption for underwriting city finances. You would think you were talking to a rock-ribbed Republican.

In ’86, tax reform and lower rates happened only because heavy-hitting Democrats were behind it. Among them: House Ways and Means Chairman Dan Rostenkowski, House Majority Leader Richard Gephardt, who would run for the Democratic nomination for president in 1988, and Sen. Bill Bradley from New Jersey, who unsuccessfully challenged Al Gore for the party nomination in 2000.

They chose to follow evidence over ideology. What do today’s Democrats want to do? They will follow ideology, of course. The base, energized with left-leaning populism, will have it no other way.