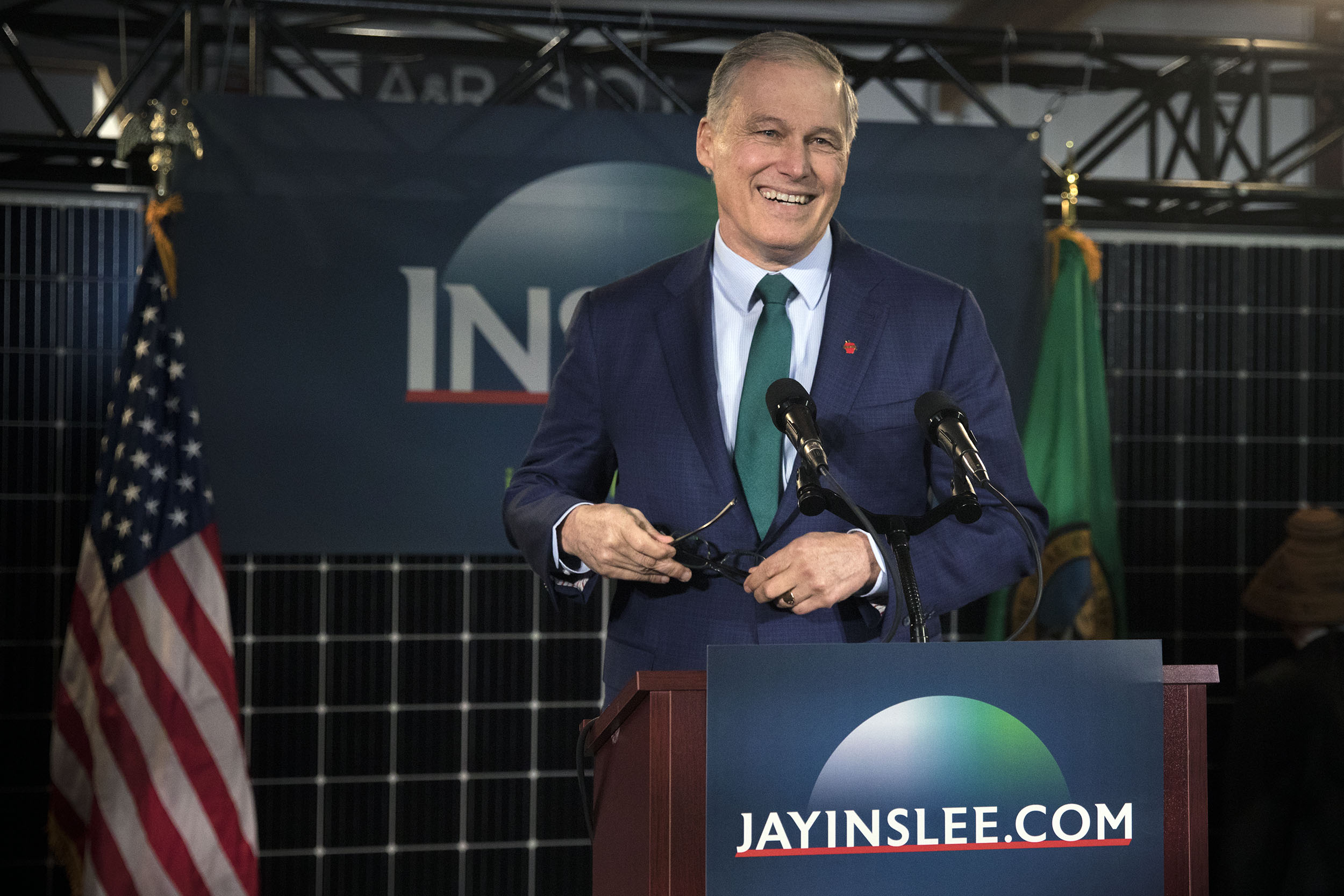 Washington Gov. Jay Inslee has spent the past two years polishing his reputation as a liberal warrior. He’s taken on President Donald Trump in court and on national TV, all while urging swift action to fight the effects of climate change.

Now, the two-term Democratic governor has made his intentions clear: He is running for president of the United States. Inslee, 68, announced his campaign Friday morning, releasing a video in which he calls climate change “the most urgent challenge of our time.”

“We’re the first generation to feel the sting of climate change, and we’re the last that can do something about it,” Inslee says in his announcement ad, which repeats the phrase, “This is our moment.”

Inslee’s steadfast climate advocacy and frequent cable news appearances, however, have yet to erase a key problem he will have to overcome on the campaign trail: Most Democratic voters seem to have no clue who he is.

A Morning Consult poll released Tuesday illustrated the extent of the challenge Inslee faces on the national stage. It showed him polling at 0 percent among Democratic primary voters, lower than any of the other 18 names included in the 15,600-person survey.

“He certainly does not rank among those who someone might see as the top contenders,” said Kyle Kondik, managing editor of Sabato’s Crystal Ball, a nonpartisan newsletter put out by the University of Virginia’s Center for Politics. “He would have a lot of work to do to introduce himself to a truly national audience."

Nor is it clear that the two-term governor has a lock on voters in his home state. A Crosscut/Elway Poll of 504 registered voters in Washington found that only 37 percent would “definitely” or “probably” vote for Inslee for president. That poll, conducted in late December, found that a slightly higher share of voters — 39 percent of those surveyed — would “probably” or “definitely” vote for someone else.

"It's not like that's great endorsement from Washington, and Washington's not a large state," said pollster Stuart Elway.

However, it's too early to start drawing big conclusions, he said.

“You're just so far away from people having to make an actual decision,” Elway said. "All you’re really doing right now is testing name recognition and some early impressions.”

As of Friday, more than a dozen candidates had announced bids for the Democratic nomination, including U.S. Sens. Bernie Sanders, Kamala Harris, Elizabeth Warren, Cory Booker, Amy Klobuchar and Kirsten Gillibrand. More are expected to jump in the race in the weeks to come. Former Vice President Joe Biden, for instance, has shown up at the top of several recent polls, but has yet to actually announce his candidacy.

While it's a long shot for Inslee, the crowded Democratic primary field could end up providing him a window of opportunity, said Margaret O’Mara, a professor of history at the University of Washington, who wrote a book on presidential elections.

“When you have a lot of people in the race, it does leave things open for unlikely contenders to rise to the top,” O’Mara said. “The Republicans saw this in 2016 with 17 people running. That was part of the pathway to Trump’s victory — that it was such a crowded field, that a very unlikely candidate could emerge the victor.”

Even so, Inslee will have to find a way to distinguish himself. Right now, he’s attempting to do that with his intense focus on climate change, a topic that occupied his attention even before he became Washington's governor in 2013. His announcement video shows clips of him talking about the threat of global warming and climate change over the years, from Congress to the state Capitol.

Cornell Clayton, director of the Thomas S. Foley Institute of Public Policy and Public Service at Washington State University, said of all of the Democratic candidates in the mix so far, Inslee “is the singular candidate in terms of climate change who has made it his premier issue.”

“He sees it as the primary issue that has to absorb the oxygen of our national politics,” Clayton said. “All of the Democratic candidates are going to make it an issue. He is going to make it the issue.”

Others question whether Inslee’s environmental focus will be enough to mobilize voters.

“The environment is really mainly a concern for people who are wealthy enough to have time to think about that,” said Christopher Parker, a University of Washington political science professor who co-wrote a book on the Tea Party movement and is working on another about racial politics. “Relative to racial equality, gender disparities and economic inequality, climate just doesn’t rise to the top of the heap.”

What’s more, a newer crop of politicians may be stealing the spotlight from Inslee when it comes to crusading against climate change. First-term U.S. Rep. Alexandria Ocasio-Cortez, D-New York, is championing a Green New Deal that calls for the planet to achieve net-zero greenhouse gas emissions by mid-century. Several of the Democratic senators running for president have co-sponsored the ambitious resolution, while other presidential contenders, including former San Antonio Mayor Julián Castro and South Bend Mayor Pete Buttigieg, have also signaled their support.

Inslee, for his part, has been unable to convince the Legislature to pass some of his more ambitious climate change proposals, including a cap-and-trade program and a carbon tax. In November, Washington voters rejected Initiative 1631, a carbon-pricing ballot measure that Inslee supported.

For now, Inslee’s experience as a statewide executive is one thing that sets him apart. Though he previously spent 15 years in Congress, he is the only Democratic candidate so far who has also served as a governor (something that could change if Colorado Gov. John Hickenlooper enters the race).

Inslee appears mindful of this advantage. Frequently in recent months, he has bragged about reports that ranked Washington as the No. 1 state in the nation for its economy and business climate. He has said Washington’s story proves you can have a strong economy while pursuing progressive policies, such as a $13.50-per-hour minimum wage and paid family and medical leave. (Another recent report also ranked Washington as the most worker-friendly state in the nation.)

Members of Congress don’t have the same ability to take credit for those kinds of things, said Todd Donovan, a professor of political science at Western Washington University.

“Whether you were responsible for it or not, it’s a lot easier to make that claim if you are an executive and in charge of government,” Donovan said.

Yet Inslee is entering a field of candidates that is shaping up to be more diverse than any in U.S. history. That could be a challenge for him, said Clayton, the WSU professor.

“Clearly, the biggest drawback to his candidacy is a demographic and generational one,” Clayton said. “He’s a 68-year-old white guy at a time I think the party is looking for a new generation of leadership, and more diversity in their leadership.”

Still, Inslee’s star could rise if he has an unexpectedly good showing in an early primary state, such as Iowa or New Hampshire, said Donovan, the WWU political science professor, who has written extensively about Iowa’s presidential caucuses.

“Nobody would have said Jimmy Carter had a chance, but he kind of pulled off an upset in the first contest, and suddenly people paid attention,” Donovan said.

This, too, is not lost on Inslee. In a December interview with The Seattle Times and Northwest News Network, Inslee noted that two recent presidents were formerly governors of small states: not just Carter from Georgia, but also Bill Clinton from Arkansas.

Money, of course, also helps. On that front, Inslee’s campaign would receive a huge boost if he wins the support of billionaire Tom Steyer, a California environmental activist who frequently backs liberal candidates and donated to Inslee’s 2016 re-election campaign.

“If Tom Steyer decides Jay Inslee has the green agenda, and this guy is it, that could help sustain an operation,” said Peter Graves, a Republican political consultant. “No one has won that battle yet.”

Steyer, who recently ruled out running for president himself, has pledged to spend $40 million in the coming year on efforts to impeach Trump. This week, Inslee hired multiple advisers who previously worked for Steyer’s climate-oriented political-action committee, Politico reported.

Beyond raising funds, Inslee has an ability to play to TV cameras that could help him during a presidential campaign, said Ron Dotzauer, a longtime Democratic strategist.

"Across the board, when a camera's on him, he shines well, he handles it well,"  Dotzauer said. "He ups his game a little bit. ... Not everyone can do that."

Even if it’s unlikely Inslee will become the Democratic nominee, the governor may have other motivations for running for president. For one, his persistent focus on cutting carbon emissions could push other candidates to make environmental issues a higher priority, said Vernon Johnson, a political science professor who directs the Ralph Munro Institute for Civic Education at Western Washington University.

An unsuccessful presidential run could help position Inslee for a cabinet job, or potentially even the vice presidential nomination, Johnson said. Should Democrats win the White House in 2020, Inslee could be considered for Energy Department secretary, administrator of the Environmental Protection Agency or head of the Interior Department, he said.

“If you go to all that trouble and you don’t win, but you end up getting a big job in D.C., maybe that’s a nice way to finish off your career in public service,” Johnson said. “And that is a distinct possibility for him.”