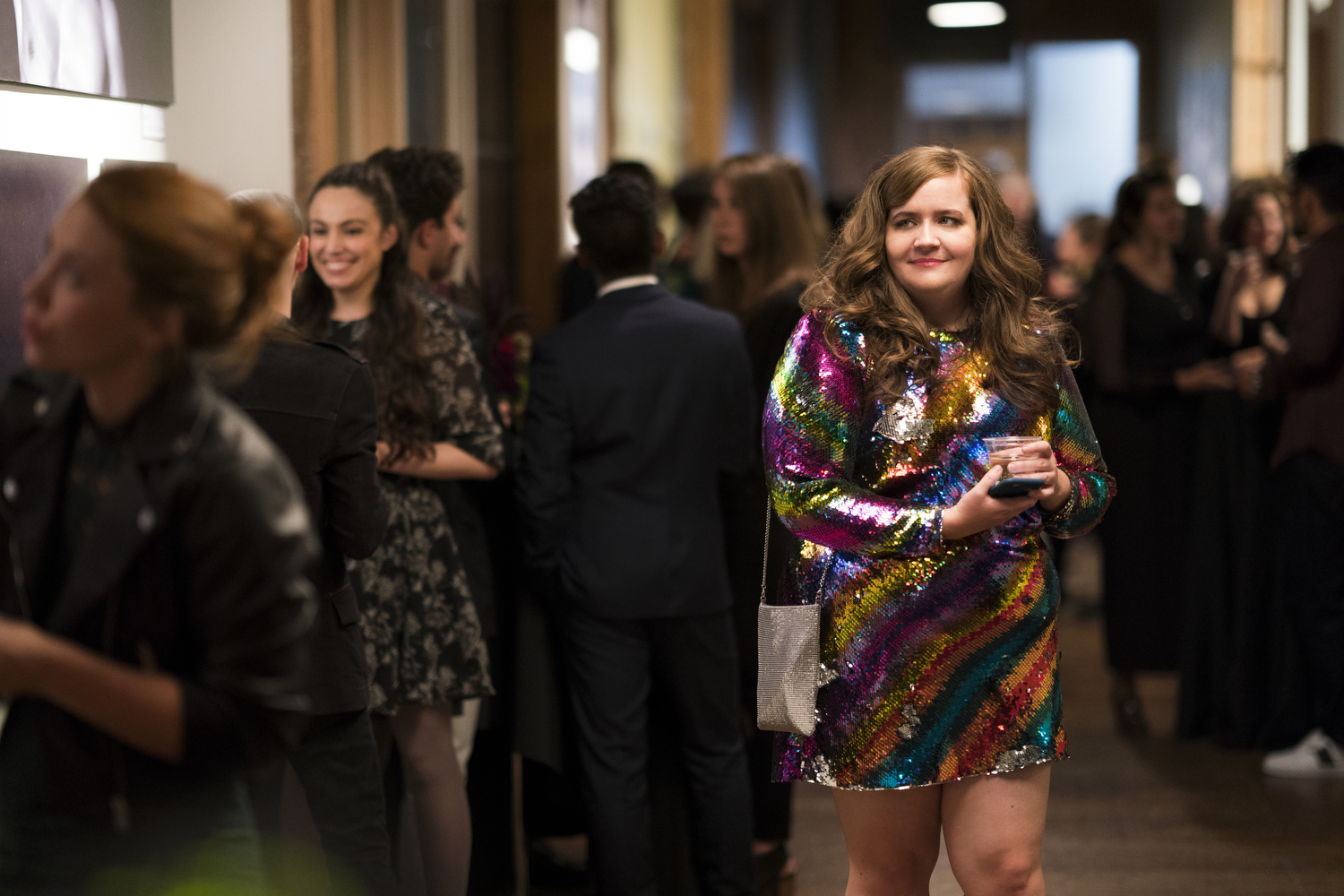 Eight years ago, Seattle-based writer Lindy West uploaded the now seminal anti-fat-shaming piece “Hello, I Am Fat” to the website of local alt-weekly The Stranger. The essay changed her life. It marked the first time West truly stood up for herself. With it came a realization about the potential of writing with purpose. Since then, that’s exactly what West has done as a writer for Jezebel, GQ, The Guardian and, most recently, as a columnist for The New York Times.

The same essay also forms the spine of West’s memoir, Shrill: Notes of a Loud Woman, published in 2016.

Now, the book is coming to life as a fictionalized Hulu series, premiering this Friday. West, also Shrill’s executive producer, co-wrote the six-part comedy series with Parks & Recreation writer Ali Rushfield and Aidy Bryant, who plays Annie, a young writer trying to navigate her love life while wrestling herself out of a lower-level calendar job onto the front pages of the internet — all while having to deal with a mean editor, a terrible troll and a “doing the bare minimum” boyfriend.

Though she’s an early-career journalist at an alt-weekly, Annie is not Lindy, exactly. The story is set in Portland, and while many plotlines are pulled from West’s life, many are not. It’s fictional. For good reasons, says West, who spoke with Crosscut about the show, writing for her younger self, and her new book.

“First of all, it’s very fraught to make a show about your actual life and actual people,” West says. “That’s just a way to become estranged from people [laughter]. We took a lot from my real life, but also from Aidy’s [Bryant, star and co-writer] life and the other writer’s lives. The priority was to make a really good show, a show that’s funny and makes you feel things.”

Did you set out to make a TV show your younger self would have loved seeing?

When I was writing Shrill, I wanted to write the book I needed when I was younger. Aidy and I wrote the show that we would have loved to watch when we were younger. We want Annie to have a cool house, cute clothes and fun life. We didn’t want this sort of drab, depressed starting point that you expect this character to have. She comes into it with personal style, a point of view and a life that doesn’t need a makeover. What needs a makeover is the world around her.

Annie’s weight is not a plot line. She’s just a woman trying to figure out her life. Still, reviewers are already calling it a show about “body positivity.” How do you feel about that?

I mean, it’s a complicated line. Sure, it’s a body-positive show: We’re showing a fat woman as the protagonist and the hero of the story, which is not the way we usually see fat people in media. But it’s also — almost paradoxically — about her life being not just that. Her body intrudes on her life because people treat her differently and sometimes very poorly because of her body, but the whole point is that she has a full, complicated life that’s not just her body.

What are some things you insisted on including in the show?

It was really important to have the abortion in there, and in a specific way. When there’s an abortion in a TV show or movie, it’s always this sort of “high drama” moment. I don’t remember ever seeing an abortion presented the way an abortion actually functioned in my life: I didn’t want to be pregnant, I had an abortion, I was relieved, and then I moved on with my life. That, I think, is the reality for a lot of people, and that is not the reality you see on TV.

Another thing that was important to Aidy and me was that this character has a fun, fulfilling sex life, which is another thing we don’t see from fat characters, typically. Typically, it’s presented as a joke, like that scene in Road Trip where the guy holds up the giant thong. It’s not true. Fat people have relationships; fat people have sex.

You published “Hello, I Am Fat” eight years ago. How do you look back on it now?

That was a pivotal moment for my career. Suddenly, I realized the power of writing something that has a purpose, that’s bigger than being funny. Something that moves, pushes on people. I realized the power of saying something that no one is saying. That’s kind of what I took to Jezebel with me, and what I do now, really. I try to find this thing that people aren’t saying or the perspective that’s not getting out there and say it. As long as I believe in what I’m saying, I’m impervious to the backlash. Yeah, I’m pretty happy with where my career is. It’s worked out well.

You’re now writing for TV and most recently a movie, Thin Skin. How have you liked screenwriting?

There’s something really liberating about screenwriting. You don’t have to do all the scaffolding that goes around the dialogue and the jokes. You don’t have to write “He enters the room,” or whatever, you just get to write the meat, the really fun part. Writing the script [for Thin Skin] with Aham, my husband [musician and comedian Ahamefule J. Oluo], and Charles Mudede was one of my favorite creative experiences of my life. Thin Skin was such a joy to make. We’re in post-production right now.

You’re also finishing up a new book, The Witches Are Coming, due out in September. What’s it about and how’s it different from Shrill?

It’s another book of essays, but slightly less personal memoir style. It’s more like my New York Times column, with more political and cultural analysis. It’s a post-#MeToo book. The title is a reference to the way that men, when they get in any kind of trouble, tend to cry that it is a witch hunt and they’re being unfairly targeted. I wrote a column about that for the Times last year. It’s about this big cultural moment we’re in. In the Access ‘grab ‘em by the pussy’ Hollywood tapes, Donald Trump said: “they let you do it.” What did we let them do? And how did we see that in media, how does that manifest in our current government? Now that people are finally being heard, this reckoning of people saying stop, what happens next?

Last year, for International Women’s Day, you wrote a column about this idea that the burden of fighting sexism is somehow always put on women’s shoulders. What would you say this year?

I would tell people not to get tired. Part of the strategy of this administration is to wear us all out with horrible day after horrible day. So we have to keep going and keep fighting — and not just for ourselves. I’m a very privileged person, I’m still OK. My children haven’t been taken from me and put in cages. So really, keep going for the people who are in far more immediate and grave danger than yourself, who don’t have a safety net or institutional power. Because this is what a society is for: To take care of each other.