Pink could be safer for hunting. Will anyone wear it?

Backers claim fluorescent pink is brighter than orange in the field, and could attract more people to hunting. But critics say the science — and female support — isn't there yet. 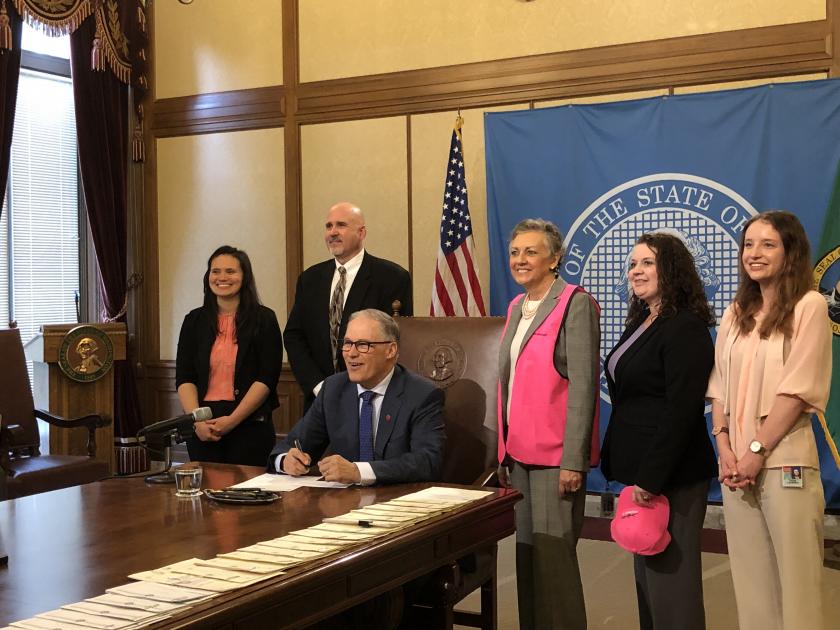 The color pink brings to mind many things: hyperfemininity, breast cancer awareness, gangly-legged flamingoes. But in a few decades, a shock of pink could prompt thoughts of muddy days spent in the forest hunting, rifle in hand.

On April 22, Gov. Jay Inslee signed into a law a bill giving hunters license to wear fluorescent pink instead of blaze orange, making Washington the ninth state to do so. Wisconsin was the first, in 2016, followed by Colorado, Louisiana, Virginia, Minnesota, Illinois, Maryland and New York.

The bill passed unanimously in both the House and Senate with Rep. Lynda Wilson, R-Vancouver, as primary sponsor. But she credits her husband with the initial inspiration for the idea: After her breast cancer diagnosis last fall, her husband Tracy decided to wear ‘breast cancer pink’ while hunting.

“He mentioned when he came back how the pink really stood out from the fall colors in a way that blaze orange doesn’t,” she says. “Between knowing that other states have endorsed pink, and my husband’s observation about the visibility of pink in the outdoors, and knowing that pink would appeal to both men and women in a way that orange doesn’t, I had enough reasons to put together a bill.”

Now Washington hunters will have the option. Under current regulations, hunters are required to wear a minimum of 400 square inches of fluorescent orange material — above the waist, visible from all sides — while under conditions that require safety colors. In brief, these safety requirements apply to any hunters present in areas where people are hunting elk and deer during modern firearms seasons or hunters in areas with anyone hunting “upland birds,” like pheasants or quails.

Washington Department of Fish and Wildlife (WDFW) will begin a rulemaking process to accommodate the new colors, which will become legal in July. But WDFW Hunter Education Division manager David Whipple expects it might take time for hunters to recognize the option, and it could lead to some initial confusion over which kinds of pink are acceptable.

“Even if you're not a hunter, you pretty much know what fluorescent hunter orange is,” Whipple says. “We’re not there yet with pink, and so we’re going to be putting a lot of effort into outreach and education to make sure people understand that it is an option, what's legal and what's not.”

“There’s a lot more pink on the retail market than there is orange, outside of hunting apparel. What we don't want people doing is buying a pastel pink sweatshirt … and thinking it’s going to be legal because it’s in a sporting goods store,” Whipple says. “Pink is a fashionable color, where orange is ... not quite that.”

The science of (not) being seen

Fluorescent orange (or hunter orange, or blaze orange, or safety orange) has been the official state signal since 1991 that there’s a gun-toting hunter in your midst. At the time, states were passing orange clothing and firearm safety education laws to reduce the incidence of hunting injury.

"The number of incidents nationwide and even in Washington has dramatically declined, and it's really because of two reasons,” Whipple says. “One is orange, and one is when hunter education became a requirement, we also saw a really significant reduction compared to past decades."

Today, the blaze orange regalia on hunters in the field is more than cultural signifier — it’s a national requirement.

“Based on previous scientific research, blaze orange is the most visible [color], to the most people, under the most conditions. Given this, blaze orange has been the ‘standard’ color adopted for hunting safety purposes nationwide for many years,” says David Allen, executive director of the International Hunters Education Association-USA (IHEA), whose 55,000 instructors train and certify more than 650,000 students in hunting safety each year.

Whipple used available science to endorse the measure as agency support prior to the vote. In addition to Wisconsin and Colorado’s pink acts, he cited the summary of an unpublished study by Majid Sarmadi, a University of Wisconsin-Madison professor and color scientist. Using a spectrophotometer, Sarmadi evaluated the reflectivity of several blaze orange and pink hunting hats, as well as how they contrasted against common forest shades of green and orange in differently lit environments. Pink stood out against orange backgrounds as well or better than orange did.

Blaze orange is also marketed as a color that deer can't see — but that claim might not be backed up by science, says University of Washington opthamologist Dr. Jay Neitz.

Animals see color by filtering wavelengths of light through photoreceptors in the retina called cones. Primates with normal vision have cones that “see” the pigments red, blue and green. Most other mammals, including deer, see only red and blue. For humans, mixing blue, red and green together results in an ‘invisible’ white light. But for red-and-blue-sensitive animals, hot pink achieves the same effect.

“It basically looks like gray to the deer's eye, [and] gray is very, very invisible compared to bright colors,” he says. “Deer do see blaze orange as both bright and colored, compared to most backgrounds in the natural world. My sense is, especially out in the natural world, where things are kind of dull, hot pink is probably a little bit [more visible] than blaze orange.”

Whipple says available research settles his safety concerns. “We’re most concerned with safety… [pink] is as visible as fluorescent hunter orange, as long as the pink is actually fluorescent, and that's the key,” he says. “You've got to have the brightness value and the contrast with your surroundings.”

Allen says national acceptance from the IHEA requires more science. He wants to see “sound, peer-reviewed scientific research indicating equal effectiveness as hunter orange, and approval of said endorsement from [IHEA] voting membership” before giving pink his blessing. Currently, IHEA recommends Hunter Orange with “a dominant wavelength between 595 and 605 nanometers, a luminance factor of not less than 40%, and an excitation purity of not less than 85%.”

“The reason [we’ve] had to pass very strict laws about what colors could be used for hunting colors is because all these people thought blaze orange compromised hunting success,” he says. “People were trying to get around those laws by making things that kind of seemed like blaze orange, or had a patch of blaze orange. [They] became very strict in order to make sure that people weren't sneaking in [muted orange colors].”

When pink bills first entered public forums, they were touted by the hunting community as potential vehicles for encouraging female membership and participation.

Hunting participation has fallen nationwide. A national census found total hunter participation fell 8% between 2006 and 2016; the Spokesman Review reported last spring that only 3% of Washingtonians hunt, compared with 4% a decade prior. Women’s participation is a rare place of growth: The National Shooting Sports Foundation found 19% of hunters in 2013 were female, compared with 10% in 2003.

“Anything that we can do to help [recruitment] is good,” Whipple says. “I won’t say that certain colors are only for certain people, but we also see that females are one of the fastest growing demographics of hunters across the country. So if we provide a color option that’s just as safe as orange, that may help maintain that level of recruitment.”

Suggesting women can be converted into hunters by appealing to perceptions of fashion or vanity remains a controversial tactic. Last year, Grand Rapids, Michigan, resident Drew Born induced a digital uproar after testifying in the state Legislature on behalf of pink. In a now-leaked memo to representatives, he alleged: “Pink is a color that can immediately identify a female, women don’t want to be mistaken for a man, even from a distance or in the woods.”

Yes, women always love to pink. It’s the only color we love. pic.twitter.com/jLh4BMp6Ub

When Wisconsin representatives made similar claims, women spoke out.

“I wear nail polish and makeup in the field, so it's not like I don't want to look good — it just doesn't change your mind, what color you're going to wear,”  says Sarah Ingle, founder and president of the 19-year-old Women’s Hunting and Sporting Association.“If it [had been] proposed as a color option to wear for everybody, I don’t think that we would have opposed it, with the proper studies.”

Three years later, after Wisconsin’s pink bill, Ingle says she hasn’t seen anyone in the field wearing pink — man, woman or otherwise. “It hasn’t made a difference, I guess, is all I have to say about that,” she says. Sales of pink hunting clothing in Wisconsin reflect that. “Maybe [female hunters in Washington] are all for [pink] — you can have a different point of view.”

WDFW is in its “infancy in terms of putting a lot of effort into recruiting new hunters,” Whipple says, noting women, minorities and youth as key groups to target.

“We have tested the waters so to speak on providing opportunities for females, in terms of hunter education classes, events, workshops and those kinds of things, and I think we're going to expand that for other demographics,” he says. “We’ve got a number of people [women and minorities and youth] that are helping us with all of those things, including marketing.”

“We have a lot of work ahead of us” he says.

The things that drive many women to pick up hunting are what inspire men to do the same.

"In my experience, most women choose to start hunting because they are looking for a deeper connection to their food, their friends and family, and the natural world," says Marcia Brownlee, the program manager for the National Wildlife Federation's Artemis: a women-run, women-focused sporting development program.

"We are supportive of more women in the field regardless of what gets them there. If pink helps them feel more included, great. I think the bigger questions are, do women have access to mentors, are there ways we can change the conversation around hunting to incorporate more of women’s stories, [and] what barriers to getting women in the field are we not yet aware of?"

Ingle, who taught herself to hunt at 19, is of a similar mind. She says women are encouraged to hunt because of natural desire and access to a receptive, nonjudgmental arena to learn in. She says leaning into decisions that could be interpreted as gendered, implicitly or otherwise, is the wrong place for hunting educators to start.

“Back in the day, it wasn’t pink that got me interested. It was just wanting to do it and blazing the trails,” says Ingle, now 45. “My club really started to promote women in the outdoors and make it acceptable. It’s a different world today than it was when I was 19 as far as acceptability, so why would we distinguish ourselves again and put that judgment back on ourselves? It's like, ‘Oh you're a woman so you're different than us.’"

Update: This article has been updated to include quotes from Artemis' Marcia Brownlee.