Presidential primary vs. caucus: WA Democrats will decide this weekend

Changes are coming to how state Democrats help pick a nominee for president. 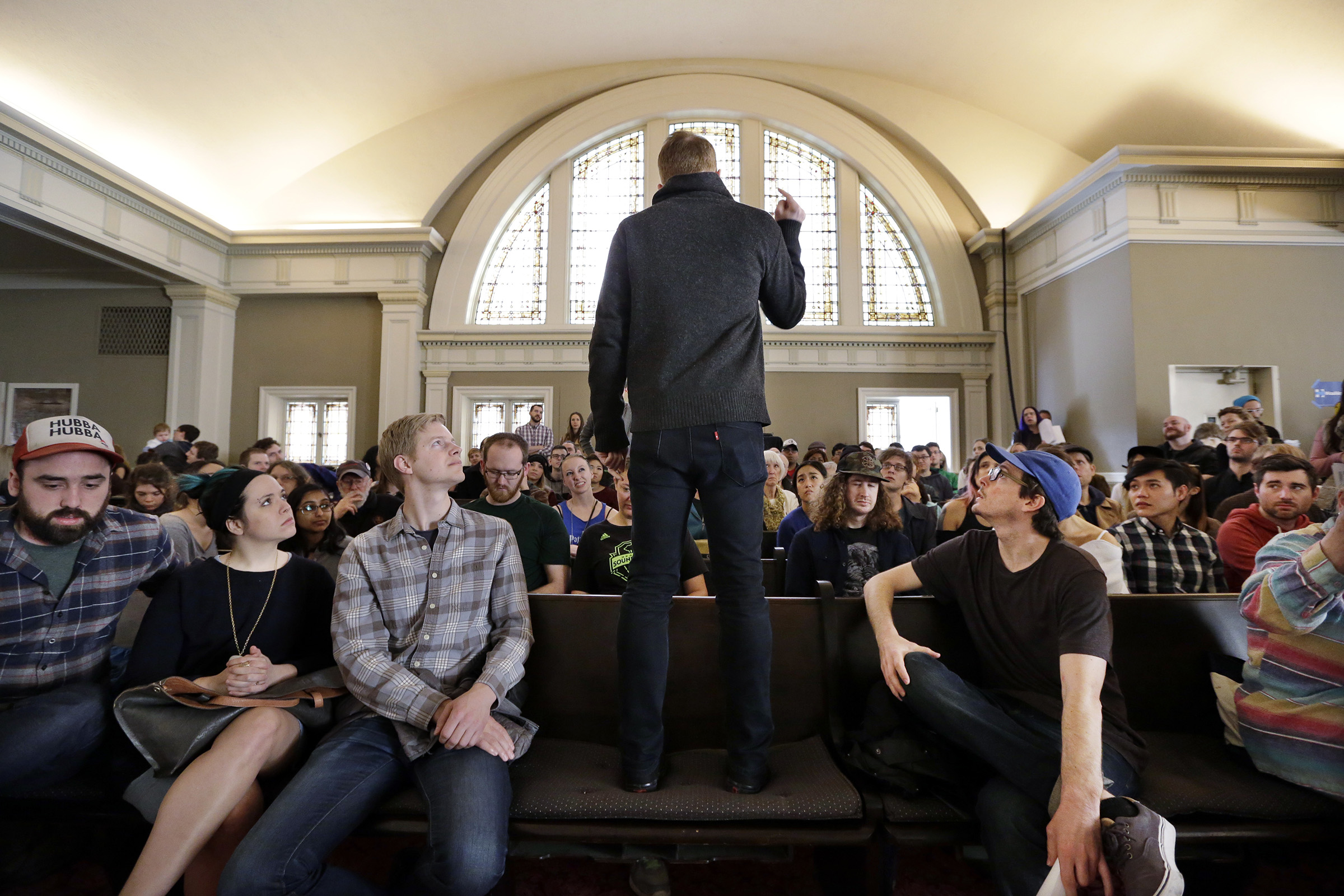 Justin Kolbeck stands on pews as he speaks to fellow precinct members in support of Hillary Clinton during a Democratic caucus Saturday, March 26, 2016, in Seattle. Democrats caucused statewide in support of either Clinton or Bernie Sanders. (AP Photo/Elaine Thompson)

Kathy Orlando does not look back on the 2016 Democratic caucuses with particular fondness or nostalgia. That year, as chair of the 27th Legislative District Democrats in Tacoma, Orlando helped manage several crowded caucus meetings.

She recently recalled lines wrapping around the block at Jason Lee Middle School as people waited for the chance to choose their preferred candidate for president. Once inside, people waited even longer to get their vote counted.

With a primary, “the people who just wanted to vote won’t have to sit through all that,” said Orlando, speaking of the caucus process. “They’ll just get to vote.”

Now, the state party is about to decide whether to make that change, which other Democrats have been clamoring for as well. The Washington State Democratic Central Committee will convene in Pasco on Sunday to vote on how to apportion delegates to presidential candidates at the party's nominating convention. The choice is between using the results of the primary, or continuing to use the caucuses, as the state party has for decades.

For the past month, the state Democratic Party has been soliciting feedback on which way it should go. As of Tuesday, the Washington State Democrats had received more than 10,000 responses.

Comments are still being accepted online through Thursday. A party representative declined to share which option has received the most support so far, saying she didn’t want to discourage people from weighing in on one plan or the other.

Whichever choice the committee makes — caucus or primary — Democratic Party officials say the aim is for the nominating process to engage more people than it did in 2016.

As part of that effort, the Democratic National Committee (DNC) is now requiring that states using caucuses offer expanded options for absentee voting. On top of that, the new DNC rules require caucuses to be more accessible to people with disabilities.

The party is also changing another practice that was especially controversial in 2016: the use of party insiders known as superdelegates. Under the old rules, these high-ranking Democratic Party officials could add to the delegate total of whichever candidate they liked, and weren’t bound to follow the results of their state’s primary or caucus vote. Starting in 2020, superdelegates to the Democratic National Convention will essentially no longer be allowed to vote on the first ballot for the party’s presidential nominee, significantly curtailing their powers.

Tom Perez, chair of the DNC, told Crosscut that the goal of all of those rule changes is to "make sure that every eligible person participates in exercising their sacred right to vote.”

In the past, Perez said, states that use presidential primaries for the Democratic nominating process have generally seen more people vote. But he said neither he nor the DNC is taking a formal position on whether states should choose primaries or caucuses for 2020. Rather, if states choose to stick with a caucus system, “what we wanted to do is make sure those caucuses were significantly more inclusive,” Perez said.

In Washington state, however, some party leaders question whether the DNC’s changes will go far enough to ensure that caucuses reach more people.

Only about 230,000 people took part in the Democratic precinct caucuses in Washington in 2016. That’s despite a more limited absentee voting option being available that year for people who couldn’t attend because of work schedules, religious observances, military service obligations, disability or illness.

By comparison, more than 800,000 people voted in the May 24 Democratic primary, even though that election had no effect on who would become the party’s nominee for president.

Should Washington Democrats proceed with caucuses in 2020, any Democrat will be able to use an absentee ballot for any reason — a more liberal policy than was in place the last time.

Still, Shasti Conrad, who chairs the King County Democrats, said she doesn’t think the new rules will prompt as many people to take part in the caucus as would vote in an all-mail election. She said among local Democratic Party officials, there is “pretty overwhelming support” for making the switch to the primary.

Conrad called the caucus system “more subjective” than a primary, in part because it consists of caucus attendees making passionate speeches, hoping to sway others to support their preferred candidate. While that can be exciting, it doesn’t always translate into people making a carefully thought out choice, she said.

With a primary election, by contrast, “You give people an opportunity to sit with their ballot and make a decision within their own time frame,” Conrad said.

Others prefer the caucus system primarily because of the enthusiasm it can inspire.

Jeannie Mitchell, who served as chair of the Pierce County Democrats in 2016, thinks switching to a primary would make the Democratic nominating process “too impersonal.” She would prefer that the state keep using caucuses.

“You walk in the door and you are part of the action — you are part of politics, face to face,” Mitchell said. “It’s not sitting in some place being spoken to by a candidate, where it’s their same old elevator speech. It’s people voicing their opinion of who they are supporting.”

Logistics, however, can be an issue. Orlando, the current Pierce County chair, said precinct caucus meetings are run by volunteers who often are stretched too thin or who don’t have adequate training.

Tara Gallagher, the vice chair of the 43rd Legislative District Democrats in Seattle, said the volunteer-run caucus system provides little guarantee that votes are being recorded and reported correctly. She said in 2016, precinct leaders at the caucuses would sometimes fill out certain forms inaccurately or return them blank.

“There is no way to know how consistently the rules are being applied and the votes are being tallied, and the delegates allocated properly,” said Gallagher, who was co-coordinator of her district’s caucuses in 2016.

Additionally, now that state lawmakers have moved the state’s presidential primary to the second week of March, Gallagher thinks there could be potential for confusion. If the primary election is still held March 10, but doesn’t affect the Democratic race, voters may not understand that the ballot they receive in the mail can’t be used for the caucuses a couple of weeks later.

An absentee ballot for the caucuses would not arrive in voters' mailboxes automatically. Instead, voters would have to specifically request one. They would also have to return the absentee ballot about a week in advance of the caucus date.

Heather Weiner, a consultant with the Washington State Democrats, said under the new caucus rules, the party would probably need to set up a new system to process absentee ballots more efficiently. She said that planning is already underway. "If we decided to do caucuses, we are going to have to come up with a whole different scheme that is basically a privately run election," Weiner said.

Even if the Democrats choose to award delegates using the primary, they would still hold a series of caucus meetings to handle other party business. Those caucus meetings would be used to choose which party members attend the Democratic National Convention.

That’s essentially the same system used by Washington Republicans, who started using the primary to allocate all of their delegates to presidential candidates in 2016. State GOP officials plan to use the presidential primary the same way again in 2020, said Caleb Heimlich, the state Republican Party chair.

“I don’t think there’s any question about which one is more accessible,” Heimlich said this week. “The secretary of state and the county auditors are much more competent in running an election that allows more people to participate.”

Perez, the DNC chair, wouldn’t go that far. He reiterated that the choice is up to the state committee members. But he repeated that he hopes those party members gravitate toward the option that has the potential to involve the most people.

“I hope one of their North Star principles will be, 'What is the format that will maximize participation of voters?'” Perez said. “I think that’s a really important question for people to ask.”

Once the state party's central committee makes its decision, it will submit its plan to the DNC for final approval. Weiner, the consultant with the state party, said officials should hear back within a few weeks.