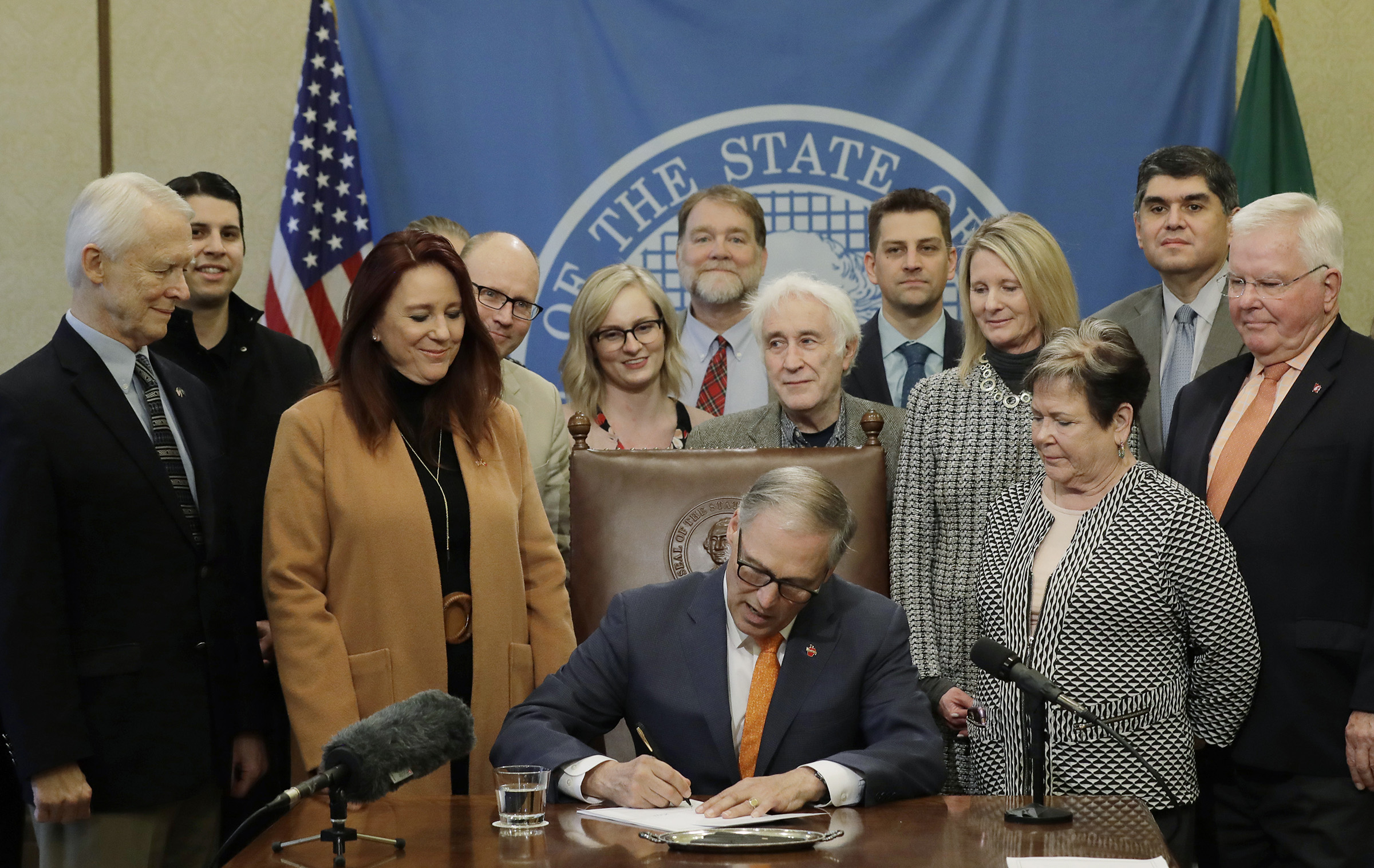 Washington Gov. Jay Inslee signs a measure into law to move the state's presidential primary from May to March, at the Capitol in Olympia on March 14, 2019. The changes to the primary created additional incentive for Washington Democrats to shift to using the primary to choose a nominee. (Photo by Ted S. Warren/AP Photo)

Washington state Democrats have decided to stop using caucuses to help choose their party’s nominee for president in 2020. For the first time, state party officials instead plan to use the presidential primary election to allocate delegates to candidates next year, breaking with decades of tradition.

Members of the Washington State Democratic Central Committee made the decision Sunday during a meeting in Pasco.

The vote by state Democratic Party officials comes only weeks after Gov. Jay Inslee signed legislation to move the state’s primary election from May to March. Many state lawmakers said they hope the earlier primary date will help Washington become more relevant in the 2020 presidential election.

Among Democratic committee members, support for making the switch to the all-mail primary was overwhelming, with members voting 121-40 in favor, according to a news release. The change will take hold unless the Democratic National Committee objects to the plan, an outcome a state party representative said is extremely unlikely.

While Washington Republicans have used results from the presidential primary to help select their party’s nominee in the past, the state’s Democrats have always used caucus meetings, while ignoring the results of the primary election.

Typically, caucus meetings take place on a weekend at a school, library or other community location, and can last for several hours.

After reports of long, chaotic and crowded caucus meetings in 2016, many Democrats spoke out about the need for a change. In particular, critics said the caucus meetings excluded people who couldn’t attend due to work, child-care responsibilities, disability or other factors.

“I think we’ve clearly outgrown the caucus, and that is something that rank-and-file Democratic voters made clear to us,” said Robert Cruickshank, a state committee member from Seattle who voted in favor of using the primary. He said, despite party officials’ best efforts in 2016, “there were still long lines, the caucuses took forever, and it was still not inclusive."

The Legislature’s recent decision to move up the primary date, as well as enact other changes to make sure the election complies with DNC rules, put additional pressure on state Democrats to actually use the primary results.

The outcome of the 2016 presidential primary also differed substantially from the caucus results. While Bernie Sanders won 72 percent of Washington's delegates by sweeping the precinct caucuses, Hillary Clinton won 52 percent of Democratic votes in the May primary that didn't count.

In a written statement Sunday, the chair of the state Democratic Party, Tina Podlodowski, spoke favorably about using the primary election to help determine a presidential nominee.

“Democrats in Washington are ready for the big show in 2020,” Podlodowski’s statement said. “We look forward to more Presidential candidate attention and visits, increasing voter and activist engagement, and lifting up Democrats at all levels on the 2020 ballot.”

The party will still use caucus meetings to choose who will attend the party’s state and national conventions — just not to apportion delegates to presidential candidates.

Joanne Fleming, a state committee member from Spokane, was one of the 40 people who voted in favor of sticking with the caucus system. She said she wished more people knew about the improvements she and others had put in motion for the next round of caucuses, including the ability for people to vote absentee without actually attending.

Fleming said she prefers using caucuses instead of a primary largely because she feels caucus meetings give more power to the grassroots.

“We want big money out of politics, and now we’re going to a primary where big money has an opportunity to have a huge impact on our primary elections,” Fleming said Sunday. “To me that is antithetical to what the Democratic Party in Washington state is about.”

The state party had solicited community feedback about which option it should choose. Out of more than 12,800 responses, 93.6 percent favored switching to the primary system, party officials said.

Note: The form below was attached Feb. 5, 2020, in anticipation for our coverage of Washington state's March 10 presidential primary. If you have a question before you vote, let us know so we can consider including it in upcoming coverage.