By combining satellite imagery and hiking surveys from Glacier National Park, scientists are closer to understanding where populations in the park and beyond might roam. A grizzly bear forages in an alpine area in Glacier National Park in Montana. In the spring, grizzlies dig for glacier lily bulbs in alpine areas. (Photo by Shane White via University of Washington)

Grizzly bears have been listed as threatened in the Lower 48 since 1975, with about 1,800 bears roaming 2 percent of their historical home range. In Washington, 50 to 60 bears inhabit the Selkirk Recovery Zone, while grizzly bears in the North Cascades — where a controversial recovery plan has stalled — exist in numbers so low (under 10) that they may be functionally extirpated.

But Glacier National Park’s grizzlies have rebounded to the point that they’re moving beyond the boundaries of the recovery zone and putting wildlife managers on edge: About 1,000 bears roam the Northern Continental Divide recovery zone, setting off alarms for human-grizzly conflict.

Conflict prevention typically focuses on moderating human behavior — things like teaching people how to avoid attracting bears to their camps and to stick to trails in the backcountry. But improving our ability to locate bears and anticipate where they might show up could not only mitigate concerns in places like Glacier, but also inform recovery efforts in places like the North Cascades.

Grizzlies are hard to observe and track, but huckleberry plants — grizzlies’ primary food resource inland of salmon-heavy river systems — move more slowly (and won’t maul you when you find them).

But new research out of the University of Washington and researchers at Glacier National Park shows that by locating all of Glacier’s huckleberry plants through a new application of remote sensing, wildlife managers could have a shot at anticipating where grizzlies might spend their time and coordinate human activity and infrastructure around that.

Picking out these plants over Glacier’s 1,583 square miles is no simple task. With the help of satellite imagery, a machine-learning algorithm and a heaping dose of hiking, the researchers taught a computer to map all of Glacier’s huckleberry plants with 75% to 81% accuracy. “I was surprised that it worked as well as it did, especially under forest canopy,” says study senior author Dr. Tabitha Graves, a U.S. Geological Survey research ecologist in Glacier National Park.

With further fine-tuning and integration with other models, the team hopes to eventually predict future huckleberry plant locations in a way that accounts for climate change, wildfire and other factors.

UW ecology Ph.D. candidate Carolyn Shores, who works in UW’s Predator Ecology Lab, joined Graves as a graduate intern to serve as the lead author on the study. Graves has been studying grizzlies and their food sources for more than 18 years; at the time, she was already researching how number of huckleberry plants and timing of their growth are important to grizzlies, birds, pollinators and even humans. Together with USGS biologist Nate Mikle, a remote-sensing specialist, the group conducted a remote-sensing project mapping and modeling huckleberry plant distribution throughout Glacier from June to September of 2017.

In that period, the trio sourced and analyzed satellite imagery of Glacier from NASA, USGS and the U.S. Department of Agriculture to test two different mapping approaches.

For the first method, the team analyzed photos of known huckleberry locations from NASA/USGS LANDSAT images taken around June, July and September of 2013 and modeled probable plant distribution throughout the park based on them. 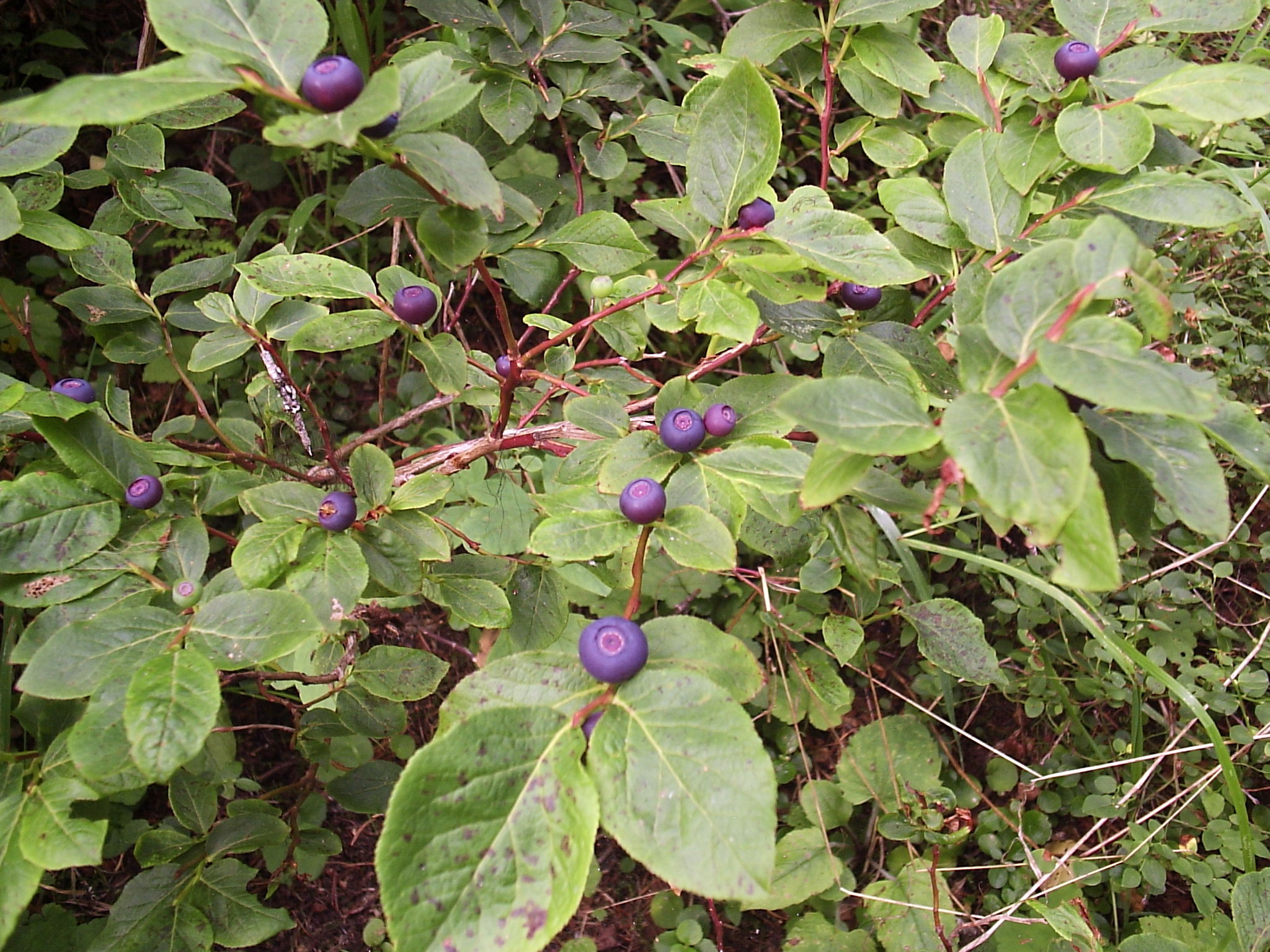 Black huckleberry fruit usually ripens in mid-July in Glacier National Park. The berries are a favorite of grizzly bears and other animals, and the plants play important roles for indigenous communities in the U.S. and Canada.(Photo by Tabitha Graves/USGS via University of Washington)

Black huckleberry fruit usually ripens in mid-July in Glacier National Park. The berries are a favorite of grizzly bears and other animals, and the plants play important roles for indigenous communities in the U.S. and Canada.(Photo by Tabitha Graves/USGS via University of Washington)

Their second method involved higher-resolution images taken from the USDA’s image database of known huckleberry sites in July 2009 and August/September 2013. These images were fed into a machine-learning program: Once the program identified the plant’s growth pattern, it used that information on an existing map to pick out likely locations of huckleberries throughout the park.

“For the machine-learning approach, we delineated huckleberry shrubs [and other land cover types] from aerial imagery and then the computer classified the rest of the image based on the samples we gave it,” Mikle says.

The key to the study’s success relied on huckleberry leaves’ bright-red hue, which peaks in autumn.

“If you’re just looking at LANDSAT imagery, huckleberries are nearly impossible to pick out with the naked eye — the resolution is just too coarse,” Mikle says. “However, the red coloration that huckleberry leaves take on in summer would show up in the spectral signature of even the relatively coarse LANDSAT imagery.”

Graves says they also chose Glacier because the park limits huckleberry picking to one quart per person per day, for personal consumption only.

To test each approach’s accuracy, the team compared results against ground-based vegetation surveys from 2007 over 1,700 plots of land throughout the park. They had some data from 2007, but dispatched Shores to hike between 20 and 30 days in summer 2017 to evaluate plots where huckleberries were the dominant vegetation.

“[It was] all in the most beautiful alpine areas of Glacier National Park,” says Shores, who hiked between seven and 10 miles over rugged, high-elevation terrain each time she went out.

“It’s like the North Cascades, but it just feels wilder, knowing that there are grizzlies there and wolf packs in the park,” she says. “The mountains are so impressive — there are glaciers on all the mountains. It’s a really amazing place. My favorite hike to collect data was a three-day backpacking trip from Bowman to Kintla Lake over Boulder Pass in the northwestern corner of the park.”

She witnessed black bears, big horned sheep, mountain goats, marmots, golden and bald eagles, and — yes — a few grizzlies. The first Glacier grizzly she saw was high on a hill above a trail near Two Medicine Lake.

“It was foraging and doing its thing, and it was just really cool to be able to watch it relatively undisturbed, what their behavior is like when they're in the wild,” she says. “[I was] just hiking through huckleberry pastures for days! There was no way I couldn’t sample them.”

Shores completed the data analysis and wrote the research paper over the following year, with assistance from Graves in editing the paper and responding to comments.

“It was just awesome working with a successful female scientist,” Shores says. “Most of the work I've done in wildlife biology has been under the supervision of men, just because it is a pretty male-dominated field, but I think that is changing.”

Ultimately, the team produced the first example of using remote sensing to map any sort of shrub species based on color variance.

“Looking at color change has been used to map insect outbreaks — like bark beetle kills in Canada, where the trees turn red after they're killed — but it’s never been used to map an understory shrub species,” Shores says. “Lots of times in scientific research, you have a great idea and you try it and it doesn't work so well and then you go onto the next idea, you know? But this worked really well, even under pretty thick tree cover.”

While evaluating their models, the team discovered that 94% of huckleberry shrubs are over 100 meters (109 yards) from human-traveled trails. “If much of these have high berry productivity, this suggests there are a lot of food resources for bears that are away from people,” Graves says.

“This baseline information can inform all sorts of other studies,” Mikle says, from tracking the outbreak patterns of diseases or insect outbreaks to mapping other plants. “We used a simple, straightforward approach to map an extremely important human and wildlife resource on a large landscape.The method is applicable to other unique species and opens up a new realm of possibilities.”

With enough testing and modifications to account for geographic differences, populations that could benefit from the technology include bears in the North Cascades, the researchers say.

“The North Cascades National Park of Washington state would be a prime candidate to apply this tool to map [huckleberries and similar] species to evaluate the park’s potential to support grizzlies,” Shores says.

Denise Shultz, chief of visitor services at North Cascades, says this mapping process could have value within the park, especially as a prediction tool. When North Cascades and the U.S. Fish & Wildlife Service collaborated on the draft environmental impact statement for the park’s preliminary grizzly introduction, human-bear conflict was a primary concern hindering reintroduction.

“Understanding where huckleberries are now, what is fruiting within 100 meters of or adjacent to established trails and the impacts to and movement of berry meadows over time could add pieces to an overall picture of how to best manage for both people and bears on the landscape,” Shultz says. “Qualitatively, we have seen changes in distribution and abundance in some areas as climate change progresses and tree lines move up in elevation. Most huckleberry species in the Cascades do less well in forested habitats. Creating a quantitative baseline now would be informative for management of a broad suite of species that rely on them.”

Right now, the USGS team is focused on studies related to huckleberry life cycles and berry growth, which could pair with their huckleberry map and help them predict places where grizzlies might eventually hang out within Glacier. Graves says her ultimate goal is to be able to predict possible conflict areas in real time; they’re at least a year away from completing these studies.

“We know relatively little about the processes governing germination, establishment, or decline” of huckleberries, Graves says, let alone their response to things like high-intensity fires in different environments. “We do not know very much about when [or how well] huckleberries will regenerate and spread in response to disturbances of various types.”

In addition to working towards her Ph.D., Shores is also a full-time caribou biologist in British Columbia (“I know. It’s a lot,” she says.) She has aspirations of investigating the relationship between the timing of plant life cycles and caribou life cycles. But the bear work has followed her north, where colleagues like natural resource sciences biologists have approached her about possibilities of applying her research in B.C.

“It's the same type of ecosystem, so yeah, they're gonna look into it,” Shores says. “I really hope that this research method is used by other biologists in other parts of the range where huckleberries and grizzly bears overlap to get a better idea of where that prime grizzly bear habitat is, to protect and conserve habitat.”