Why Seattle will swing back toward the center 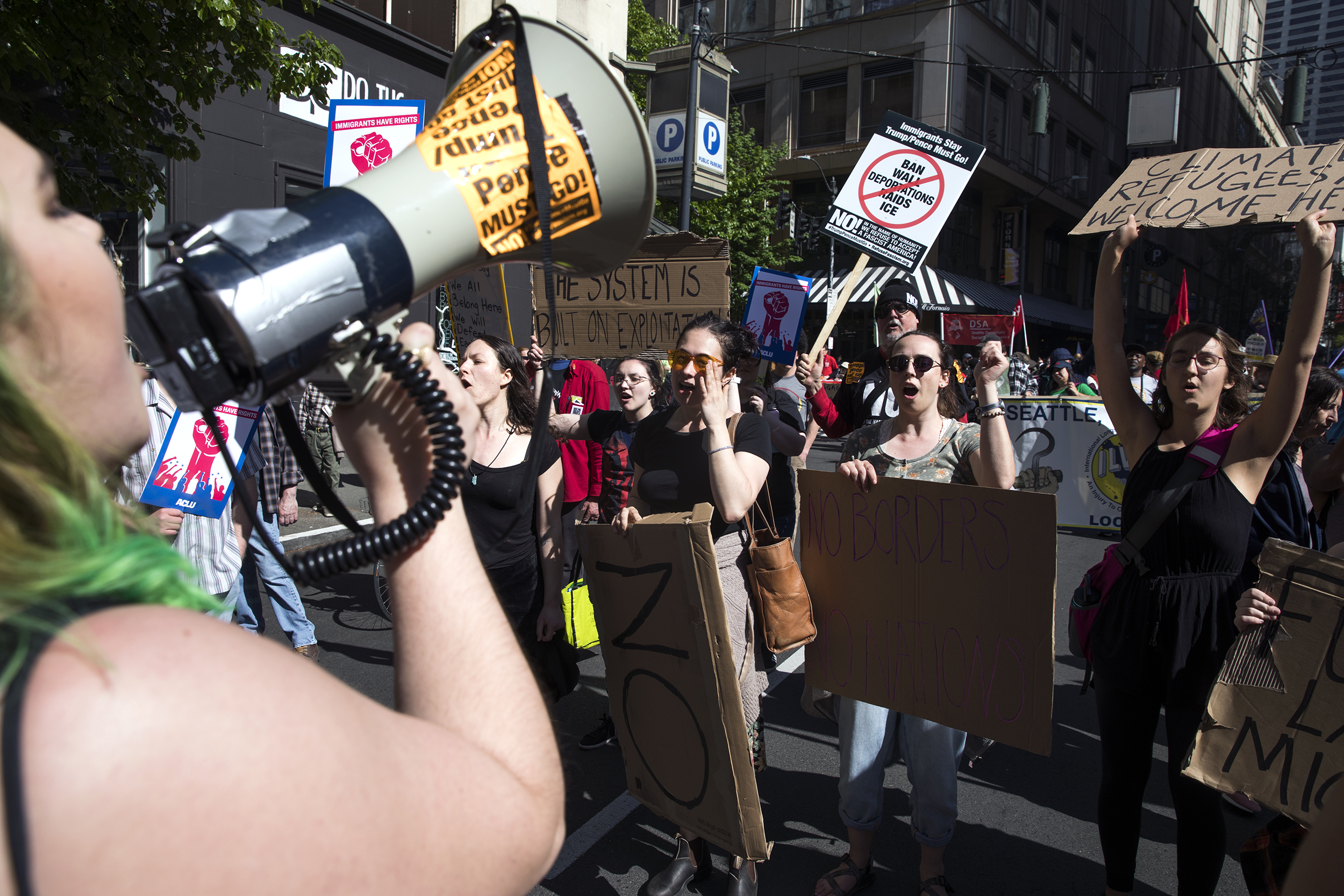 May Day protests in Seattle, May 1, 2019: If police can change tactics on protests, why can't the city make changes in how it deals with homelessness and substance use issues? (Photo by Matt M. McKnight/Crosscut)

I’ve known Jenny Durkan for nearly 20 years and, despite our differences, I like her and I’m rooting for her success. With that in mind, I hope she’ll consider the following advice: Mayor, when you’re addressing a community meeting of neighbors and local business leaders angry and anxious about the crime linked to drug-addled homelessness in their area, don’t recite crime statistics. It doesn’t work, for three reasons.

First, you’re essentially asking people to ignore the reality they see around them every day and trust data that may be technically accurate, but, to them, also irrelevant. People trust what they see.

Second, many nuisance violations (filth and garbage – littering, being drunk or smoking pot in public, illegal burning) aren’t even catalogued because cops don’t make arrests or issue tickets. Even when cops do make arrests for more serious crimes, like theft or property destruction, homeless addicts are often recycled through the system, hence the notorious list of 100 homeless addicts with 3,500 criminal charges, among them.

Third, even many homeless people acknowledge that the city is becoming more violent, as they are often the victims of assaults, rapes and, increasingly, murder. More than one quarter of Seattle’s homicides last year involved a homeless person as a victim, an assailant, or both. The number has been climbing for three years. When it comes to both assaults and nonviolent crimes, a Seattle Police Department report found that 1 in 5 bookings in 2018 involved a homeless person, even though they make up less than 1% of the city’s population.

At one of the Crosscut Festival panels last Saturday, pollster Stuart Elway showed that the longer you’ve lived in Seattle, the more discomfited you are by how the city has changed. That makes sense. New arrivals don’t have a frame of reference for measuring change. They don’t notice the decline in civility, security and neighborliness that was once summed up in a catchphrase I haven’t heard in over a decade: Seattle Nice.

It also suggests that Seattle residents have tired of the city’s excuses for failing to stop the worsening of what city leaders promised a dozen years ago to “end”: homelessness.

Here’s a comparison. For three years in a row there has been a free fall in the once rampant May Day violence by left-wing Antifa (for “anti-fascist”) rioters. How come? Because when the rioting got progressively worse several years in a row – more broken windows, more property vandalized, more cops injured by flying projectiles, including Molotov cocktails – the police changed tactics. Instead of giving them space (on the ridiculous theory that maintaining a close presence might provoke them), the police started crowding them. Good idea. When people with bandanas and gas masks show up for a rally wearing backpacks filled with rocks, batteries, slingshots and Molotov cocktails, they’re not waiting to be provoked. They’re waiting for an opportunity to break things and hurt people. Once that reality finally sunk in at City Hall (it took years), the cops were authorized to change tactics, which led to better results. Virtually no May Day violence in 2017, 2018 and 2019.

Why can’t we change direction regarding the effects of drug addiction combined with homelessness in this city? Seattle’s political establishment seems adamantly opposed to acknowledging failure and changing tactics. Example: At the end of Eric Johnson’s “Seattle is Dying” KOMO TV special, which chronicled the links between the drug-addicted homeless, social dysfunction and crime, a hopeful note was sounded. A successful program in Rhode Island, the Medically Assisted Treatment (MAT) program, which blends punishment with treatment, manages to keep most addicts from straying into old alliances and bad habits. Several people in the MAT program say that jail, accompanied by treatment, saved their lives. So powerful was the impact of the KOMO special – even outside the Puget Sound area – that Rhode Island authorities are hosting a two-day workshop at the end of the month for jurisdictions around the country that have asked about it. Oregon will be there. So will Colorado. So will New York.

But no one from Seattle will be attending. In fact, according to J.R. Ventura from the Rhode Island Department of Corrections, no one from the Seattle Mayor’s Office or the Seattle City Council, or any city or King County agency, or the city attorney or the county prosecutor has sent so much as an email or made a phone call asking about the program. No one.

Instead, we’re treated to City Attorney Pete Holmes blaming at least part of Seattle’s social erosion on the lack of an income tax. How much longer will Seattle voters tolerate this nonsense?

Maybe not much longer. A slate of candidates willing to say the word “failure” and pledge to do something different could swing this city back from the left-wing fringes to simple sensibility. Voter frustration is on their side.

Correction: Acts such as smoking pot in public or being drunk in public are subject to civil penalties. An earlier version of this story said they were nuisance crimes.