After measles outbreak, WA toughened its vaccine law. Could Congress do the same?

A few new bills in Congress focus on combating misinformation about vaccines, but would not limit exemptions as several states have. 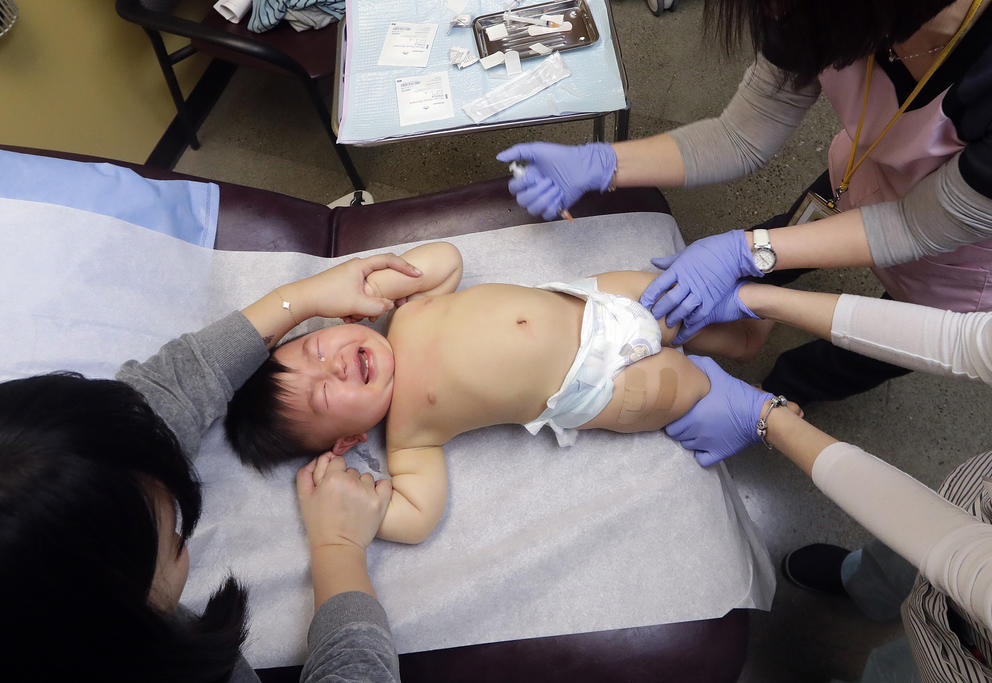 One-year-old Abel Zhang cries as he receives the last of three inoculations, including a vaccine for measles, mumps, and rubella (MMR), at the International Community Health Services on Feb. 13, 2019, in Seattle. (Photo by Elaine Thompson/AP)

This year’s measles outbreak is unlike anything the United States has seen in decades. So far in 2019, the highly contagious disease has sickened more than 1,000 people nationwide — a level of infection not seen since 1992. The disease’s resurgence has prompted several new measures to boost vaccination rates at the state level, including here in Washington, where 81 infections have been reported this year.

Under a bill Gov. Jay Inslee signed into law last month, the state will no longer allow parents to exempt their school-age children from the required measles, mumps and rubella (MMR) vaccine based solely on a personal or philosophical objection. Lawmakers in Maine and New York went even further, eliminating all nonmedical exemptions from vaccine requirements, including for people with religious objections.

Now, members of Congress are discussing what they can do at the federal level to combat flagging vaccination rates, a key factor in the ongoing outbreaks.

Yet, in contrast to what states have done, most of the federal proposals do not attempt to crack down on vaccine exemptions. Rather, several bills before Congress aim to better educate people about the safety and importance of vaccines — not impose stricter mandates.

There are legal reasons for that, mainly dealing with which powers rest with states versus the federal government, several experts told Crosscut. But U.S. Rep. Kim Schrier, D-Issaquah, said there are also political and practical matters to consider.

Schrier recently introduced a bill that aims to collect better data about communities where vaccine rates are low, so as to target them with carefully tailored education campaigns.

Schrier said she believes her bill, dubbed the VACCINES Act, has a higher chance of passing in part because it doesn’t focus on controversial mandates or eliminating exemptions. “Because there are not the harsh mandates … it gets broader appeal,” said Schrier, who is a pediatrician. She said the ongoing measles problem demands legislation that can actually win approval and start making a difference.

So far, her proposal has attracted a dozen co-sponsors, a third of whom are Republicans.

The legislation would spend $15 million in each of the next five years to collect data, then devote an additional $6 million per year to public information campaigns.

A broader health care bill co-sponsored by Sen. Patty Murray, D-Washington, would also look to improve vaccination rates through awareness campaigns. And at least two other congressional proposals similarly look to address low vaccination rates by combating misinformation, rather than by narrowing the list of reasons parents can opt out of vaccinating their children.

That’s likely in recognition of Congress' limited ability to meddle in state affairs, including when it comes to directly regulating public schools.

States generally require vaccinations against measles and other common childhood diseases before children can attend school, as well as day care. But setting school entry requirements is typically the province of states, not the federal government, said Hugh Spitzer, a professor of law at the University of Washington.

“In terms of very basic principles, under the U.S. Constitution and the system of federalism that we have, the federal government does not have police power. So it doesn’t have regulatory authority over people on a day-to-day basis,” Spitzer said.

“All the U.S. government is officially supposed to be doing is defense, foreign affairs, the postal service, printing money — and the big one is interstate commerce,” he added.

Eliminating vaccine exemptions by invoking the commerce clause of the U.S. Constitution, however, would most likely be feasible only in extraordinary circumstances, said Lois Weithorn, a professor at the University of California Hastings College of Law in San Francisco.

She gave an example: “Let’s say we had an epidemic from a vaccine-preventable disease causing thousands of deaths, and state policies alone are ineffective at slowing the epidemic.” That is arguably a situation where Congress could use its power to regulate interstate commerce in order to enact a mandatory vaccination policy. But the current measles outbreak may not meet that high threshold, she said.

Though such a federal action could theoretically be possible, she said, the legal barriers would be “potentially insurmountable.”

“It definitely would be an area where there would be a number of hurdles and barriers to overcome,” Weithorn said.

Another option exists, however: Congress could push states to shore up their vaccination requirements by withholding federal funding from states that allow religious and philosophical exemptions for vaccines. “That’s probably the most classic way that Congress can lawfully address a public health concern,” said Kathleen Hoke, director of the eastern region of the Network for Public Health Law, which is based at the University of Maryland.

Legislation proposed by U.S. Rep. Frederica Wilson, D-Florida, would take that more forceful approach. Her bill, the Vaccinate All Children Act, would withhold certain grants for preventative health services, if states don’t ensure all elementary and secondary students are vaccinated according to federal recommendations. Medical exemptions would still be allowed, if a doctor attests a vaccine could endanger a child’s health.

So far, Wilson’s idea hasn’t gained much traction, however. She previously introduced the legislation unsuccessfully in 2015, following measles outbreaks that sickened 667 people across the country the previous year.

Schrier said she worries that stricter mandates could simply drive patients to evade the rules, rather than encouraging vaccinations. For instance, parents might seek out a “doctor mill” to falsely certify that a child needs a medical exemption from a vaccine, she said.

“There are doctors out there who refuse to see unvaccinated children, and what that ultimately does is it drives patients to quacks,” Schrier said. “It drives them underground and it ends the conversation. And so the more that we can do to maintain a conversation and win people’s hearts and minds over so they make the right decision, that’s the best way to do it.”

Some Washington state officials think Schrier's educational approach could yield substantial benefits. John Wiesman, Washington’s secretary of health, recently issued a written statement in support of her bill. “We have been falling down on the prevention work of vaccine preventable diseases and we must act now,” Wiesman's statement said. “This bill is urgently needed.”

Schrier said her goal is to go beyond the usual public-service announcement, which she said doesn’t reach people who may already distrust government and question the safety of vaccines. She thinks a more emotional message could get through to people in ways typical education campaigns wouldn’t. One hypothetical example she gives is that of a 75-year-old retired doctor recalling when a child died in his arms from measles.

“The misinformation stories online are compelling and scary and pull at people’s emotions,” she said. “We need to be able to counter that with compelling emotional stories that speak truth. Because there is no controversy about vaccines in the medical world. That controversy only exists online.”

by / September 14
Inside Crosscut