Officials say it's been underwater for at least ‘a couple of years,’ and the likelihood of determining its identity remains low. 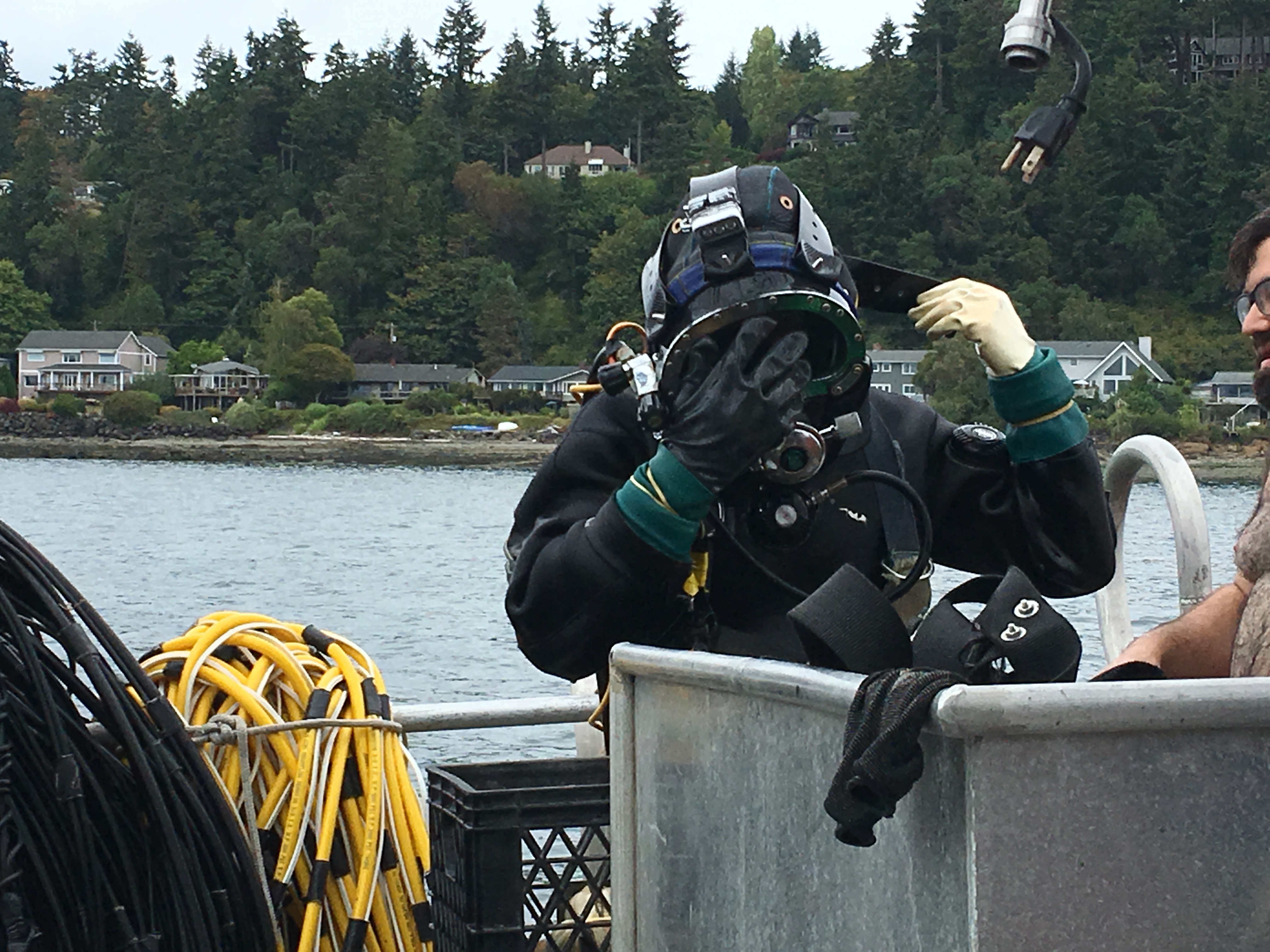 A geoduck diver suits up in Puget Sound. Photo courtesy of Michael Salter.

Commercial diver Michael Salter was in the middle of a routine geoduck harvest Wednesday afternoon near Bainbridge Island, about halfway between Brownsville Marina and the Agate Pass Bridge. Crawling along the Manzanita harvest tract roughly 60 feet below the surface, he blasted the seabed with a water gun. A haze of mud and silt trailed behind him as he dropped down onto a sand ledge no more than three feet across, lined with seaweed and shells.

Suddenly, he nicked something with his elbow.

“There's this huge cloud of silt behind me, and this skull rolls out of it, and the eyestock is popped up and looking at me and it was the creepiest feeling I've maybe ever had,” Salter says. “I knew it was a human skull as soon as I saw it… I didn’t know what to do.”

He’d seen remains in a college anatomy class before, but nothing like this in the course of his work. He radioed his colleagues aboard the deck of the harvesting boat. “I’m kind of screaming, ‘I just found a human skull, holy shit, holy shit.’”

His crew called the Washington State Department of Natural Resources. Waiting for an enforcement team to arrive, he remained motionless on the seafloor. “I just sat there and waited for the current to move the silt out of the way,” he says.

Enforcement Officer and Diver Greg Bash responded to a call unlike any he’d fielded in his years with WA DNR.

Bash and three colleagues asked Salter to retrieve the skull, which was jawless, stained brown and encrusted with barnacles extending into one eye socket.

Salter nudged the skull into the bag he uses for geoduck collection, and line-hauled it up to the surface, where Bash took possession of the remains. After a conversation with the Bainbridge Island Police Department, WA DNR sent the skull to the Kitsap County Coroner’s office.

Coroner Jeff Wallis confirmed to Crosscut that the skull is human.

“It appears to have been underwater for quite some time,” Wallis says.

The skull was transported to the King County Medical Examiner’s Office for a forensic anthropologist to review. 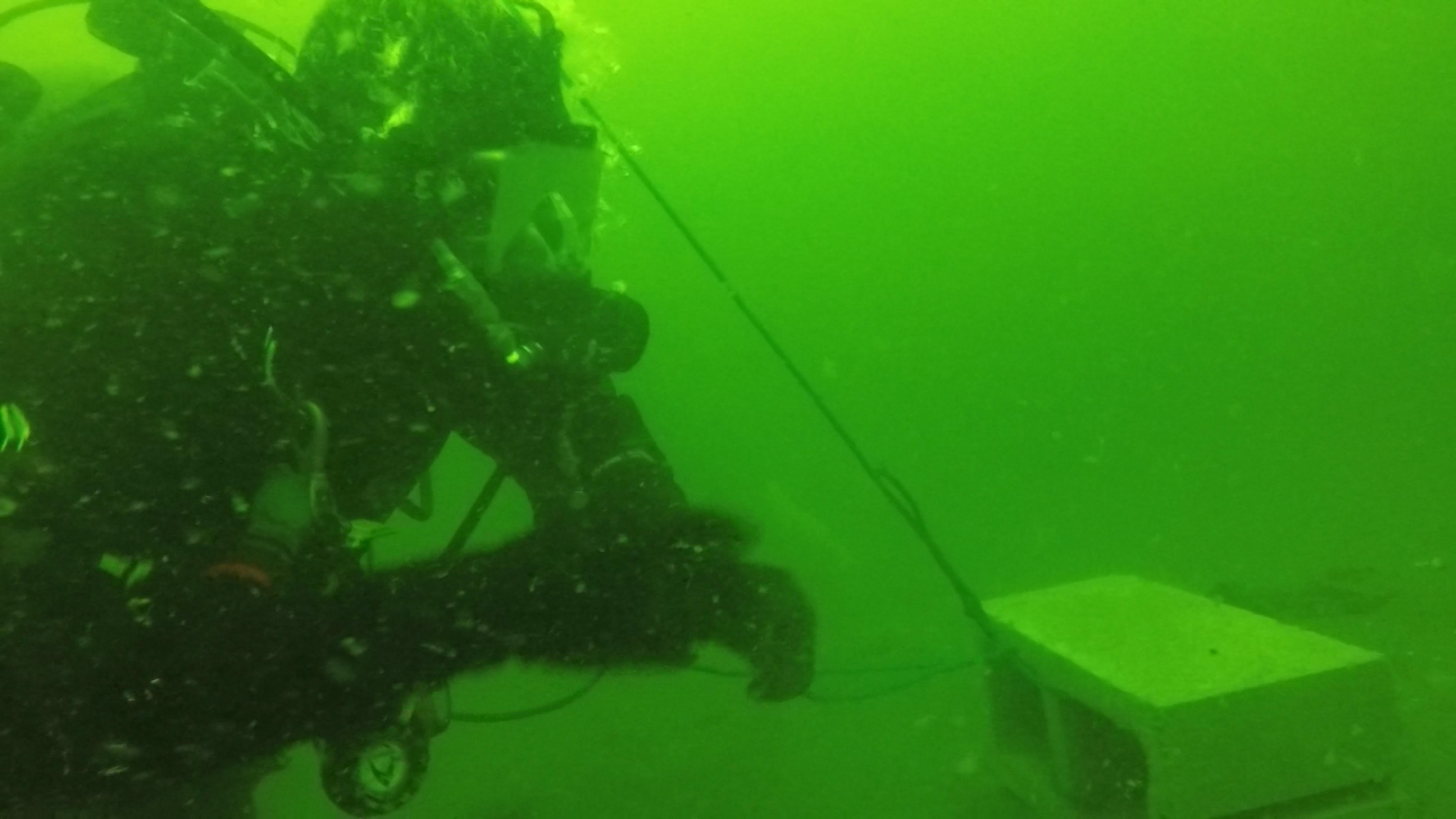 In this GoPro image, "[WA DNR] divers worked with police to search for more remains around the area [where] the skull was found," says Joe Smillie, a spokesman for WA DNR. "The diver in the photo is preparing to secure a search line to an anchor block that was deployed to mark the location of the remains located yesterday. The divers then extended out along the search line to search the area." Photo Courtesy of WA DNR.

In this GoPro image, "[WA DNR] divers worked with police to search for more remains around the area [where] the skull was found," says Joe Smillie, a spokesman for WA DNR. "The diver in the photo is preparing to secure a search line to an anchor block that was deployed to mark the location of the remains located yesterday. The divers then extended out along the search line to search the area." Photo Courtesy of WA DNR.

“This is a first for me,” Bash says. “I've been doing this job for over 21 years, and we're on the water pretty much 365 days a year. Our fishery goes year-round. This is the first human remains that have been found that I know of.”

Jeff Horn, interim chief of police of the Bainbridge Island Police Department, says in his five years on staff, WA DNR has never reported human remains to his department before.

“We don't know anything really — we're hoping to find some more out today,” he says. “We don't find skulls every day.”

Sam Swanson, a longtime diver who has served as a representative on the Harvest Divers Union of the Pacific and is a colleague of Salter’s, confirms the rarity of the find.

The skull’s age and identity are questions that might not be answered for some time, if ever.

“It was obvious to me, I’m not an anthropologist ... but it's assumed that the skull is very old,” Bash says.

At the medical examiner’s office, a forensic anthropologist will examine it for any identifiable features and determine whether any DNA can be extracted, says Wallis, the Kitsap County coroner.

“I'm not very optimistic on [DNA extraction] just because of how long it's been in the water,” he says. It’s likely been underwater for “at least a couple of years,” he added.

“There is a certain difficulty [that comes with underwater remains identification], and that's where the forensic anthropologist comes in,” Wallis says. “They will actually consult with a marine biologist to help give us a better time frame on it.”

Regardless of the skull’s origin, it remains an object of curiosity for the geoduck-harvesting community.

“I was a volunteer firefighter and have seen all kinds of things, and it didn't really bother me; I don't think any of the crew had any emotional stress or anything from it,” Bash says. “But society has gone morbid a little bit. A couple harvesters said, ‘Could we see it or take pictures of it?’ And we said, ‘Hey, let's respect the dead.’”

The Bainbridge Island Police Department and WA DNR conducted dives in the area Thursday to see if there were more remains. Horn says they didn't find anything, and don't have plans to do any more dives at this point.

“And I’m thinking, if I know what’s down there, it’s not so bad, you know, you deal with it, but coming out of the darkness and being surprised by it was quite shocking,” Salter says. “I spend a lot of time outside in the woods and whatnot, hiking and fishing, and there's got to be all kinds of stuff out there and I've never thought about it.”

This article was updated at 6:44 p.m. on July 25, 2019, to include quotes from Michael Salter, the diver who discovered the skull; and to include an additional photo courtesy of WA DNR. It was updated again at 10:21 a.m. on July 26, 2019, to reflect new information regarding the Bainbridge Island Police Department's Thursday dives at the harvest tract.