Seattle City Council faces an impossible task. Why do so many want in?

Those running for the seven open seats have before them a thankless — and essential — job. 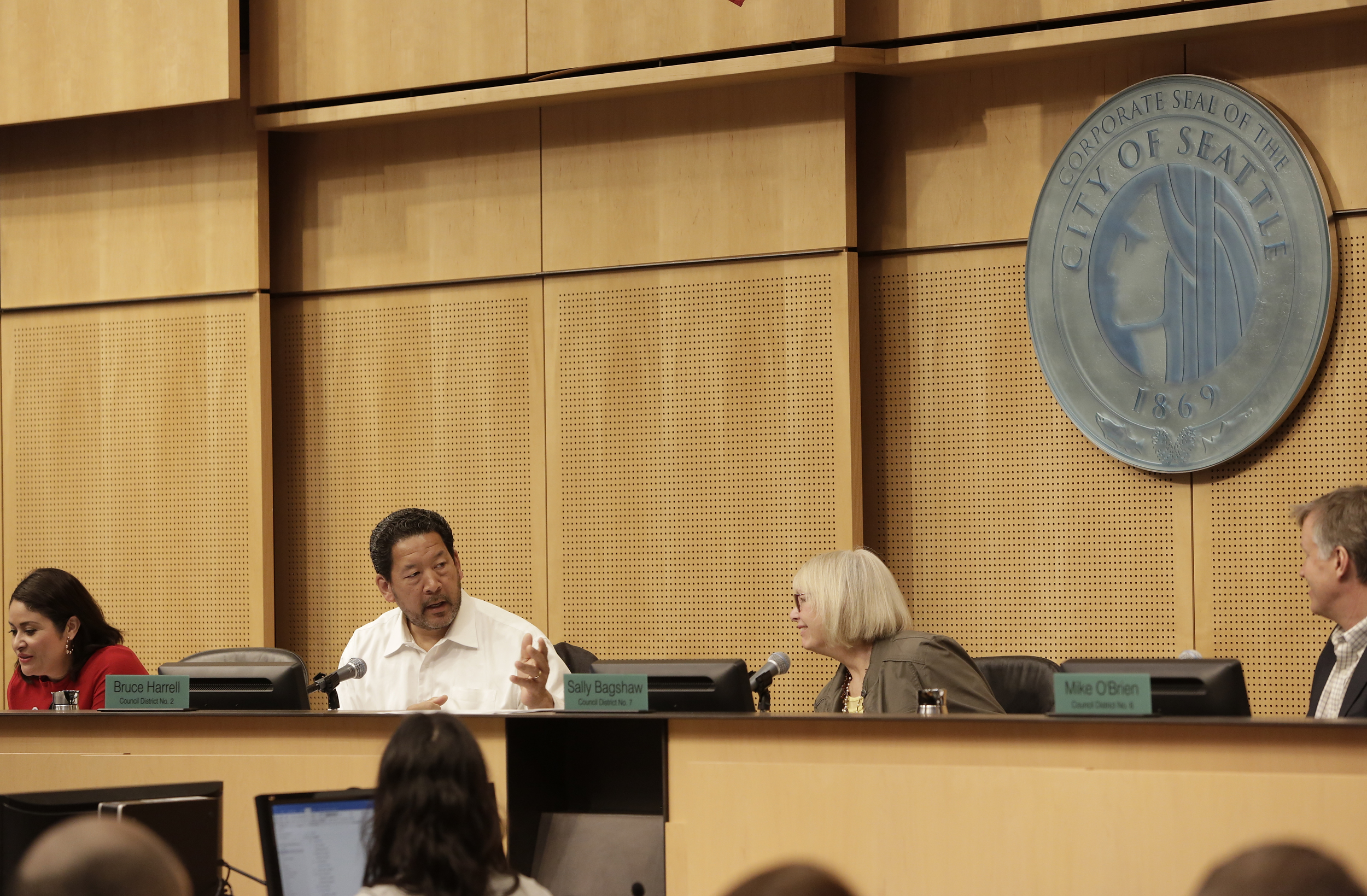 Councilmember Bruce Harrell, second from left, speaks as Sally Bagshaw, second from right, and other members listen during a Seattle City Council special meeting of the Finance and Neighborhoods Committee on May 11, 2018. Harrell, Bagshaw and Mike O'Brien, far right, are all vacating the council at the end of their terms this fall. (Photo by Jason Redmond for Crosscut)

As this year’s city council races heat up (the primary is Aug. 6; the general election is Nov. 5), we can marvel at some of the changes of the past four years. Districts, for example, were brought back to Seattle City Council elections in 2015 after a 104-year absence. Seattle voters did away with the districts — then called wards — in 1911 because they feared what was then called “Hinky Dink” politics, which was shorthand for corrupt Chicago-style ward politics and politicians, like that city’s infamous Michael “Hinky Dink” Kenna, who, in the late 19th century, came to personify the worst of powerful urban ward bosses. In Seattle, council members who were elected to represent the entire city were seen as less likely to be corrupted, people who would consider all residents of the city as their constituency. Getting rid of districts was a progressive reform.

According to news accounts, proponents of reinstating district representation wanted to give candidates a chance to run for office with an affordable grassroots campaign and to promote more diversity in council elections. In other words, a century later, districts were being seen as progressive reform. Across the political spectrum, people in Seattle believed that City Hall was too beholden to big money and downtown interests (citywide campaigns are expensive). Plus, districts would make specific council members accountable to their local constituency. So the voters brought districts back in 2013; seven district seats were created, and two citywide seats were retained. The first district election was in 2015.

Seattle also instituted a “Democracy Voucher” program that allows people to donate as much as $100 in city money to candidates who choose to finance their campaign through the voucher program. Public voucher funds earmarked for this year’s council races: $4.2 million.

In 2019, all seven district seats are up for the vote; the two citywide seats are not. Altogether, the races have attracted more than 50 council candidates. Council turnover will be significant, given that four incumbents are not seeking re-election.

All this change brings many new faces to the council, but will it fundamentally change this governing body? Seattle is at a very interesting moment, having ridden a boom and an infrastructure extravaganza: the downtown toll tunnel, ongoing waterfront makeover, demolition of the Alaskan Way Viaduct, expansion of Link light rail, the State Route 520 expansion through the Montlake neighborhood to Interstate 5, the Washington State Convention Center expansion, to name a few of these projects. If we are in the “period of maximum constraint” regarding transportation, we have been in a period of maximum nonrestraint as far as development goes.

All that growth and it hasn’t solved many of our biggest challenges, and in some cases, it’s exacerbated them. Homelessness is terrible, housing affordability is elusive, traffic — even before our current “maximum constraint” — snarls our streets, our orcas are dying off, and the perception persists that political power is still unbalanced between the people and City Hall. And the affluence that has come with growth has led to gentrification, displacement and the furthering of income inequality.
I am looking at a group photo of the Seattle City Council in 2014, just before district elections were implemented in 2015. Of the nine council members, all elected as at-large members, there are only four still on the council today: Sally Bagshaw, Bruce Harrell, Mike O’Brien and Kshama Sawant. Three of those four incumbents are not running for re-election in 2019. From an election campaign standpoint, Sawant is the last one standing. Who would have thought that the city council’s most controversial and polarizing figure would be the only one competing in a political version of the reality-TV game Survivor?

Implementation of a long-debated major “upzone” of 27 neighborhood hubs (a plan the city council approved in March) is the great hope for creating more affordable housing through increased density and developer fees for building low-income units, but the plan has inflamed tensions in many neighborhoods, especially among homeowners. This issue has not been resolved by district representation or vouchers. It may come to a boil in some districts.

There are greatly contrasting perceptions on other issues, too. In a recent conversation, Mayor Jenny Durkan told me that when Seattle is done with all its current big projects, the city will be entering its “golden years.” Almost simultaneously, local television station KOMO-TV ran a series about homelessness, crime and drug addiction that was titled “Seattle Is Dying.” Can both be true?

Whoever is elected to the council will have a daunting task in trying to solve these problems, and they will be criticized no matter what they do. History shows that the council often risks thinking either too big or too small. For example, it went big when it tried to make the “rich” (Amazon and other big employers) pay a head tax to help with homelessness — only to reverse course when Amazon opposed it, and a majority of Seattleites didn’t like it either. The council’s actions infuriated people on both sides of the debate. But it also has been criticized for focusing on minutiae, such as banning plastic straws. Whether tackling big or small issues, the council is still unpopular, even with the district representation we’ve had for four years.

I honestly don’t know why someone would want to be a city council member, but I am glad there are such people. We clearly need good people solving problems and overseeing how the city works. At a time when divisions often seem insurmountable, it might be more appropriate to send thank-you notes along with your vouchers to candidates brave enough to tackle a largely thankless job. And perhaps also to the citizens who try to engage their elected officials. That can be pretty thankless, too.

This story was originally published in Seattle magazine.