Youth suicides are up in WA. Can the state help?

In the two-plus decades since teen suicide prevention made a major impact, a new wave of deaths is prompting new approaches to the problem. 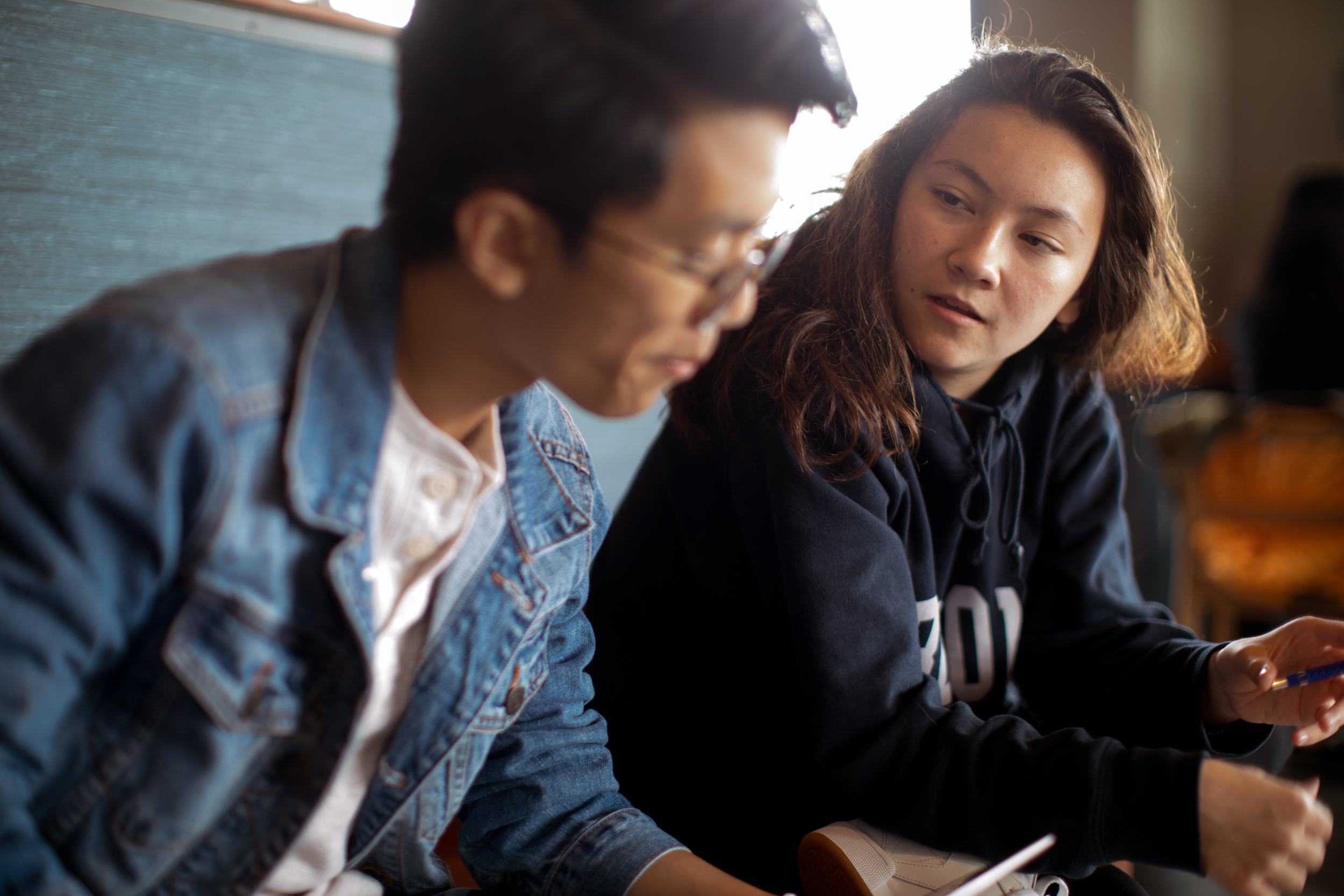 Seika Brown of Archnova, a youth activist organization based in the greater Seattle area, meets at a coffee shop in Issaquah, to discuss logistics for upcoming campaigns. (Photo by Matt M. McKnight/Crosscut)

It seemed inevitable that what is now known as “suicide contagion” would spread beyond the Denny-Blaine mansion where Cobain died to some of the millions of bereaved Nirvana fans, most in their teens and 20s. As had been the pattern for generations, a wave of similar deaths would follow a celebrity suicide.

"We just looked at each other and said, `This is going to be a disaster,’” one Catholic University psychology professor studying suicide recalled in 1996. “We were convinced.”

That outbreak never came. Rather, those fears prompted immediate action that researchers at the time credited with preventing an epidemic of suicides. The year after Cobain’s death, Washington launched a statewide initiative aimed at addressing the creeping rise in suicide among the state’s young people. Suicide rates among children and young adults dropped.

Recently, though, suicide rates among the youngest Washingtonians have spiked, leading to fears that some different strain of the contagion feared in the mid-’90s is loose in Washington. Those who are watching the trend, which extends to the nation as a whole, describe an emergent disaster as rates of suicide and suicide attempts climb. No one can say why it is happening.

“There was one week when we were in session when seven youths took their own lives,” Rep. Tina Orwall, D-Des Moines, said in a recent interview, describing a spate of suicides captured in part in an April KUOW report. “We’re in an absolute crisis.”

Even as health workers lament a lack of tracking information related to youth suicide, data collected by the state Department of Health and other agencies show a surge in suicide rates among children and young adults in Washington.

Most suicides involved men and boys, with middle-aged men accounting for 37% of the deaths in Washington state. Girls and young women, meanwhile, are most likely to hurt themselves intentionally. About 500 Washington girls are hospitalized annually because of self-inflicted injuries.

“We basically are living in a society that’s not good for our mental health,” said Jennifer Stuber, director and co-founder of Forefront Suicide Prevention at the University of Washington.

“We have a growing crisis on our hands,” Stuber continued. “Our emergency rooms and our children’s hospital are saying they’re seeing more kids than ever before, so we really do need to start paying attention.”

Leaders in the field, people touched by suicide and legislators active on the issue contacted for this piece all describe the situation as a catastrophe, the origins of which are not yet clear. Legislation meant to explore and address the problem is in the works, though the state Legislature’s focus was set elsewhere during the recent session.

Suicide has been impossible to ignore for Seika Brown.

Brown was 8 when she nearly lost her older brother to suicide. Now 17, she remembers confusion at the time, calling 911 at her mother’s request without knowing why. When her brother was hospitalized, his prognosis was kept from her.

As the years passed, that confusion gave way to some clarity.

“I remember being in 4th or 5th grade and doing my math homework in the waiting room of the therapy sessions,” said Brown, now entering her senior year at Issaquah High School. “It wasn’t an empty room. It was a room full of people, full of families. Most of the people sitting in those waiting rooms, they were happy.”

Those experiences proved invaluable when depression and suicidal thoughts visited her. Mental health care wasn’t strange to her, she said. It was the norm. But that wasn’t the case everywhere.

“I thought, by the time I got to high school, the resources that my brother lacked would be there,” Brown said in a recent interview.

They weren’t, so Brown and a collection of classmates set to filling that gap. They formed the nonprofit Archnova, met with the district superintendent and helped craft legislation at the state level that would develop new training programs and requirements aimed at improving how schools respond to students in crisis.

The bill, sponsored and shepherded by Orwall, included a collection of initiatives meant to strengthen mental health services in schools. Among other reforms, it would have required school staffs be trained to spot signs that a student may be moving toward suicide, and directed them to share their suspicions with the student’s parents or a health worker who could intervene. The legislation didn’t make it out of committee during the most recent session, though part of it was incorporated into a package addressing youth violence.

Washington has seen a smattering of suicide prevention efforts. Initiatives aimed at addressing higher-than-expected suicide rates in agricultural communities and among the state’s veterans are underway. Suicide awareness has been incorporated into everything from medical training schemes to the state hunter-education pamphlet.

But, despite decades of work on the issue, most areas of the state have no clear plan to address youth suicide, Stuber said. School counselors are hard to come by in Washington — a recent American Civil Liberties Union report found that there is one for every 448 students, half the recommended rate — and school staff members usually aren’t comprehensively trained to intervene when a student shows signs that they are struggling. And stopping a single student could do a great deal of good. Whenever a young person dies of suicide, Stuber said, “there’s a real contagion risk.”

Her frustration palpable, Orwall, a social worker who spent her career working in mental health, said she and a collection of legislators plan to spend the summer crafting a bill that they hope will pass when the Legislature reconvenes this winter.

“We don’t have protocols in our schools on notifying parents when a student is suicidal,” Orwall said. “We don’t have the mental health capacity, which really needs to be thoroughly thought out and invested in in our schools. … A mass shooting is every parent’s nightmare, but the reality is the biggest threat they have right now is losing their kid to suicide.”

Though Washington’s statewide suicide rate exceeds the national average, the uptick in both youth suicides and suicide generally tracks with climbing numbers seen across the United States.

“Unfortunately the rates in every state, except Nevada, are going up,” said Sigrid Reinert, a suicide prevention specialist with the state Health Department. “We have data that show us that it goes up, but we don’t know the reasons for that.”

Beyond the death tolls, one of the few bits of hard information available to those grappling with the problem is the state Healthy Youth Survey, a questionnaire put to thousands of Washington 8th, 10th and 12th graders every other year. The 2018 responses were not heartening.

One in 10 students — including 8th graders — reported having attempted suicide in the prior year. More than one in five said they’d considered killing themselves, a proportion of that has grown by nearly 50 percent in the past decade.

What drives the rise is anyone’s guess. Blame has been placed on the decline in community institutions, the rise of social media and cyberbullying, general despondence at the state of the world, the suicide-centric Netflix series 13 Reasons Why. Any, all or none of the suppositions could prove true.

Rep. Gina Mosbrucker, R-Goldendale, wants answers. A dance teacher, Mosbrucker nearly lost one of her teen students to suicide. When the darkness receded, Mosbrucker said, the 15-year-old encouraged her to get to work on the issue.

A mental health administrator pointed Mosbrucker to a new law in Montana that in 2016 created an interdisciplinary team to examine the lives and deaths of residents who died by suicide. The aim is to use that information to determine the most effective ways to help Montanans at risk for suicide. Mosbrucker introduced a bill that would create a similar review team in Washington; it did not receive a floor vote in the most recent session, though Mosbrucker intends to introduce another version in the next legislative session.

“We have these beautiful lives that are being just lost, and we’re not doing the work to figure out why,” Mosbrucker said.

“The answers [to] many of the social policy issues that we work on are in these kids,” she continued. “They can tell us what’s wrong.”

Stuber, the director of Forefront Suicide Prevention, said suicide is complex but not mysterious. Suicidal behaviors, she said, usually follow a coalescence of three factors within a person. They’ve lost their sense of belonging, they believe the world would be better without them and they’ve developed, physically and mentally, the capability to kill themselves.

Most suspect that deeper research into the rise in youth suicides will show that stress, despair and mental illness pair painfully with a sneaking isolation they attribute to the digitally connected life children now lead.

Yet the technology cuts both ways. Social media accounts that draw bullies and invite self-doubt can also foster an openness about life’s struggles. Seventeen-year-old Brown, for instance, talks about texting friends and building support networks that cross the country.

“There’s a different level of comfort about talking about mental health in this new generation, and I think we all need to catch up,” Orwall said.

Reinert, who has led the Health Department’s youth suicide prevention effort since 2012, described a recent meeting she attended with a collection of Seattle-area high school students. Their worries extended from the personal — abuse in the home, academic pressure — to the global. Reinert said she is concerned the students are not being given the mental tools they need to flourish in the face of those stresses.

“From working on resilience to helping people cope to giving people hope, that fits right in with suicide prevention,” Reinert said.

Making a similar pitch, Brown describes a tree. Stubborn social problems, suicide among them, are its boughs. Mental health is a root.

“When it comes down to suicide and depression, it’s a huge issue that can branch into many other issues,” she said. “When we focus on it, we can see a lot of change in how our society works. …

“Every person can help.”