Candidates who benefited from independent expenditures did well, but correlation isn't necessarily causation. 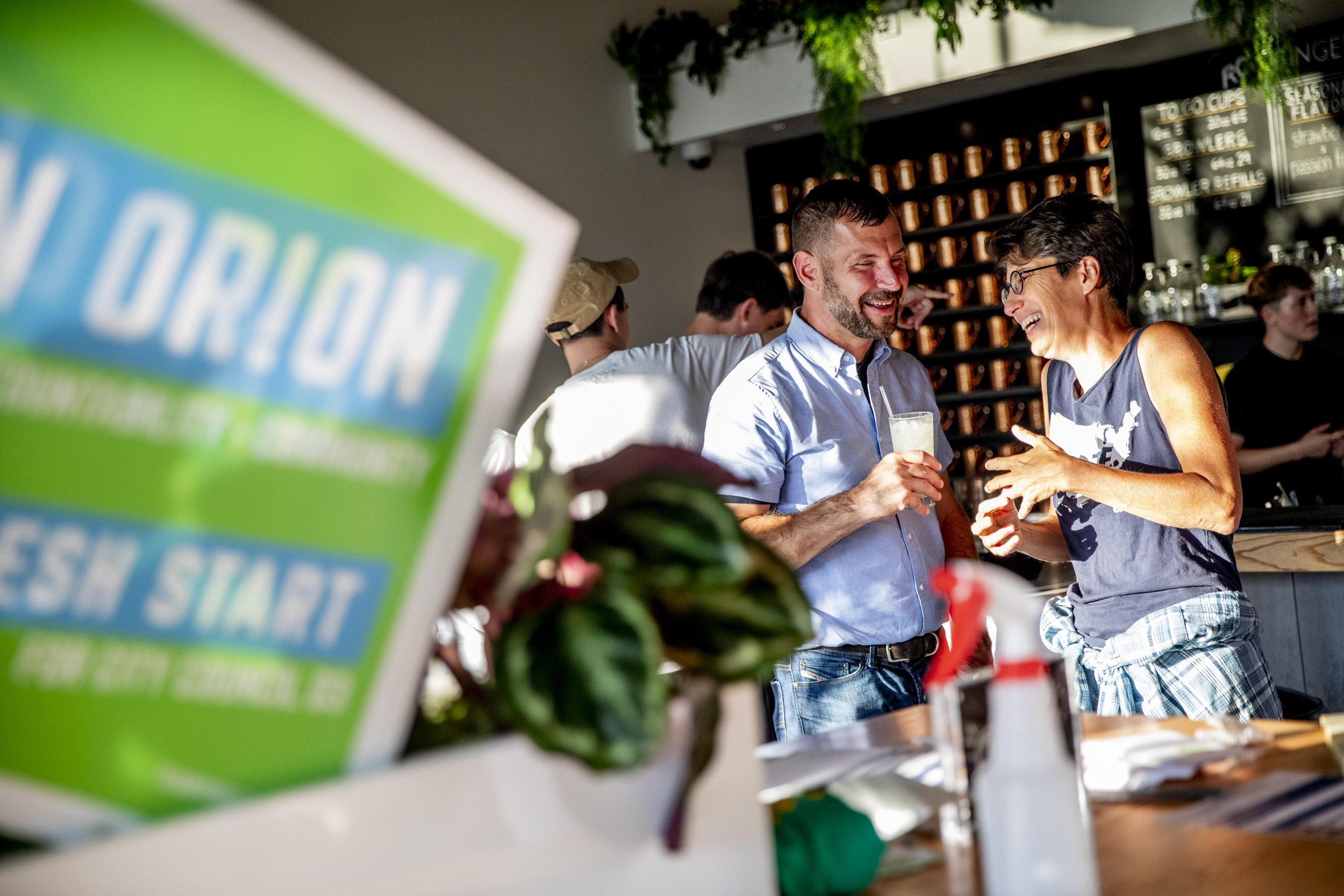 The backing of a deep-pocketed political action committee may not mean everything in a local election, but Tuesday’s primary made one thing clear: It certainly doesn’t hurt, especially for those representing Seattle’s more moderate wing of politics.

The top six recipients of funding from limit-free independent expenditure committees all advanced to the general election for a seat on the Seattle City Council. At the same time, candidates who saw PAC spending in opposition to their campaigns underperformed expectations.

There are a large number of factors that go into determining the success or failure of a campaign, and teasing out the exact role money played in any given candidate’s vote total is impossible. But those writing the checks clearly think their money is worth the investment.

“We were very pleased with the results last night,” said former Councilmember Tim Burgess, who since his 2017 retirement has taken the lead on a new PAC called People for Seattle. “All of the People for Seattle-endorsed candidates advanced. And candidates that we did not want to advance did not and actually performed very poorly.”

Burgess added, “Our fundraising success allowed us to communicate our message to voters through the various media channels that we chose to use. Clearly that helped.”

The business-backed candidates — and therefore those generally deemed more “moderate” by Seattle standards — benefited the most from PAC spending, according to the state Public Disclosure Commission. Egan Orion advanced to the general election with the support of $142,000 spent on his behalf, mostly from two committees — the Seattle Chamber of Commerce’s Civic Alliance for a Sound Economy (CASE) and Burgess’ People for Seattle.

At the same time, his two main opponents — Councilmember Kshama Sawant and Zachary DeWolf — each had over $12,000 in PAC money spent against them. Sawant took first place in the race Tuesday night, but with 33 percent of the vote, well short of 50 percent — a warning sign for a two-term incumbent. Meanwhile, DeWolf — a member of the Seattle School Board and well-recognized community member — saw his campaign flop, finishing well behind both Sawant and Orion.

Districts 1 and 2 — in southwest and southeast Seattle — were both inundated with independent expenditures. The beneficiaries — Philip Tavel and Mark Solomon — each had well over $100,000 spent on their behalf from three separate PACs and both advanced to the November election.

Solomon, who finished second in the primary behind Tammy Morales, expressed some reticence at the independent expenditures while invoking the U.S. Supreme Court decision that made them possible. “This is the reality of Citizens United,” Solomon, a crime prevention coordinator with the Seattle Police Department, told Crosscut on election night. “Big money is going to get in one way or another.”

In the District 1 race, Tavel finished second to incumbent Councilmember Lisa Herbold, who faced over $22,000 in PAC spending against her, compared with about $13,000 spent on her behalf.

For Herbold, this was a pleasant surprise. “I expected the negative campaigning to have a bigger impact,” she told Crosscut on election night.

But she’s nevertheless hovering just below 50 percent after facing two candidates — Tavel and Brendan Kolding — who are more conservative than her, meaning her reelection campaign may not be a walk in the park, as some observers had assumed it would be.

PAC money was heavily invested in District 4, a pivotal race in the battle to change the shape of the council. Former Burgess legislative aide Alex Pedersen had nearly $70,000 spent on his behalf from three PACs — CASE, People for Seattle and Moms for Seattle — and now enjoys a comfortable lead in the primary count.

The negative spending from PACs in the district revealed an apparent strategy in shaping the general election. Labor-backed Emily Myers saw over $11,000 spent against her by Burgess’ People for Seattle. But Shaun Scott — a socialist viewed as the most liberal candidate in the race and whose grass roots support is evident by his heavy haul of Democracy Voucher cash — had none against him. Scott bested Myers to advance to the general.

When asked about why his group spent only against Myers, Burgess declined to discuss strategy.

In District 6, second-place finisher Heidi Wills benefited from $40,000 in spending.

Despite all the PAC spending on business-backed candidates, it was a candidate with the support of labor who benefited the most. Andrew Lewis saw nearly $150,000 spent on his behalf in his District 7 race by the PAC for Unite Here Local 8, which represents hotel workers. Lewis, who also received the endorsement of the Stranger, is sitting in first place after initial returns, just ahead of former Seattle Police Chief Jim Pugel.

With the exception of Lewis and Unite Here, the PAC spending was mostly one-sided.

“I think we did do a good job,” said Markham McIntyre, executive director of the Chamber’s CASE. “We invested fairly heavily in field operations. We went person to person. We feel pretty confident that we ended up motivating some voters to turn in their ballot.”

Most of the primary’s successful candidates who are seen as more liberal did not reap anywhere near the same level of PAC spending. Herbold and Morales each saw about $13,000 spent on their behalf. Sawant, Scott and Dan Strauss, District 6’s first-place finisher, saw almost no independent expenditures.

The new liberal PAC Civic Alliance for a Progressive Economy (CAPE) spent only modestly when compared with CASE, People for Seattle and Moms for Seattle. Rachel Lauter, executive director of Working Washington and a driving force behind CAPE, acknowledged that the group was outspent by opposing PACs. But, she said, CAPE’s work was nevertheless effective and important.

“We don’t think any amount of money is going to trick Seattle voters into voting for big businesses,” she said, adding, “It does get expensive when you’re drowning voters in misinformation and stock photos. But to us we don’t see this as a dollar-for-dollar competition. It’s about making sure voters know what’s at stake.”

It’s nearly impossible to prove the exact effect of money on an election’s results. But Mark Alan Smith, professor of political science at the University of Washington, said if it was ever going to influence results, it would be during an off-year, city council primary.

“Overall it’s a pretty information-dry environment and, as a result, city council elections are really a best case scenario for money mattering,” he said. “You don’t have the party label, you don’t have some of the other structures in place, and lot of what happens in city council races is you’re really just fighting for name recognition and the money can help with that.”

The flush of PAC money served another purpose for some candidates: as a rallying point.

Sawant dedicated most of her election-night speech to maligning the independent expenditures. She framed the fight as existential and characterized moneyed interests as trying to buy the election. “Big business has gone to war in all the seven city council races and the Chamber candidate has made it through to the general election in every race,” she said. “This has to be a sobering thought for us.”

Sawant specifically named Burgess as well, chastising him and his PAC for campaign flyers that criticized DeWolf and Myers by tying them to Sawant.

Asked if People for Seattle was going negative, Burgess said, “I would say that our messaging was very direct, very blunt and painted strong contrasts between the candidates we supported and those we did not. So in that sense, yes, we were very clear in our messaging and very focused and that messaging worked.”

The record-breaking PAC arms race is likely to get even more voracious going into the November election, as the various committees regroup.